Construction on the new $8.1 million grocery store complex which will house a grocery store, restaurant, community center, and Clean Laundry is scheduled to begin on November 4 at 227 Franklin Street in Waterloo, next door to the CVS.

But these are not your run-of-the-mill businesses.

“We call it All-In Grocers,” said Rodney Anderson, a land developer who also owns a small mall and commercial property and co-owns this project with his partner, Lance Dunn, “because we want everyone to come in—Black, White, Hispanic. This store will be owned by Black people—and operated—but it will employ everyone we want in any nationality.” 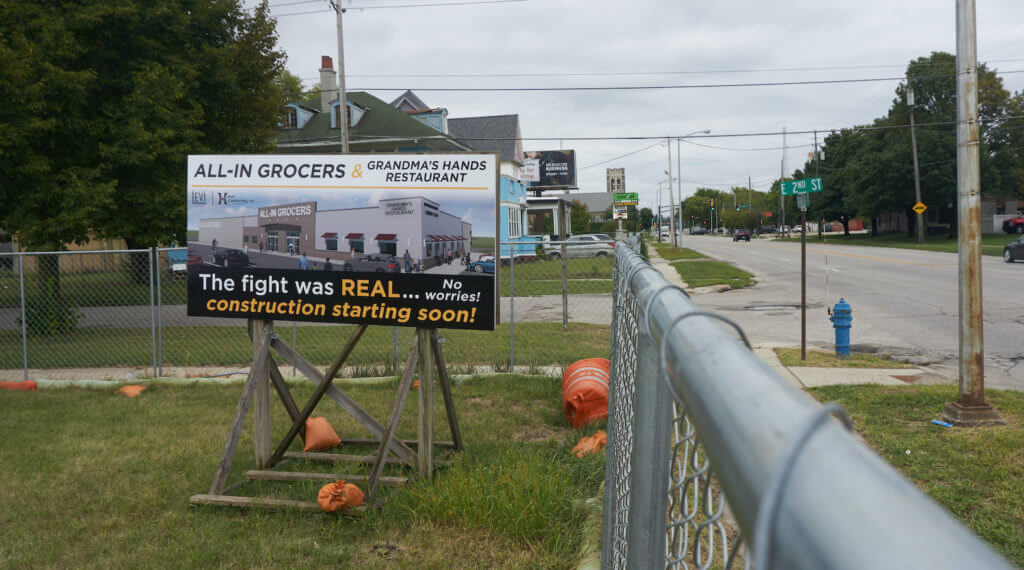 Not only will the shoppers and staff represent “everyone” but so will the products.

“The grocery store will be culturally sensitive,” said Anderson. By that, he means whether customers are Black, White, Bosnian, Liberian, German, etc., he and Dunn want them to find products important to them—year round, not just when they are in season, like at other stores.

The restaurant will also be culturally sensitive.

“That’s why it’s called Grandma’s Hands Restaurant,” said Anderson. “Because everyone thinks their grandma was just the best cook, she’s got the best recipes.”

The partners’ desire to employ or provide opportunities to “everyone” goes beyond nationality.

It applies to people with challenges.

“My nephew, he has Aspergers,” said Anderson. “So we’re going to be hiring exceptional persons at the store.”

It applies to ex-felons.

“A few of my family members are ex-felons and they say they can’t find a job,” Anderson said. “So if you can’t find a job, what happens is you go back to the system because you start to do the same things you did to get yourself in there.”

Not only will those with a prior conviction work at the store, they will get training at the community center.

“When they get out from doing their debt to society,” said Anderson, “they will have the opportunity to do a six week program and when they complete that six-week program, they are granted a job. That’s how they get back on their feet.”

Dunn, who grew up with Anderson and has over 24 years experience in human resources, is currently the City of Waterloo Human Resources Director. He will apply his expertise in recruiting and hiring employees.

The community center will also offer cooking courses and educational courses, such as math and science. And history.

“We’re in a partnership now with a young lady to talk about history, Black history,” Dunn said.

The history component is important to Anderson, since the community center will be named Willie Mae Wright Community Center.

“Willie Mae Wright was a civil rights icon in Waterloo. And when you have that, you have to get some kind of history of how we got to this point.”

Lastly and just as importantly, “everyone” applies to women—especially Black women who Anderson and Dunn feel do not get enough ownership or leadership opportunities. By ownership, Anderson’s referring to Black women being in a position to own their own companies.

“If you want to work for All-In Grocers for a year or two, you might say, Rodney or Mr. Dunn, ‘I make a heck of a pie and I’ve got this idea,’” said Anderson, who has six sisters. “Then we’re going to buy pies from you. We’re not going to buy these pies and things from outside vendors. We’ve got neighbors that can cook. So we’re going to give everyone an opportunity.”

Everyone will have the opportunity to make a livable wage. The pay scale will start at $10/hour, increasing for more experienced staff and managers.

Anderson adds, “When I say livable wage, we’re going to make sure that we sit back and not take all these end-of-the-year dividends and payouts, that we can pass it along to the managers, the general managers, and the employees.”

Anderson also wanted to extend opportunities to people of color in the construction effort. Terry Phillips of Phillips Construction will do the concrete work, but there are few other Black or minority bonded and licensed construction firms. So Anderson wants to offer a program to train those interested in entering the business.

“I talked to the contractor who’s going to do the grocery store,” said Anderson, “about ‘let’s get a pilot program, pushing black contractors. Let them work by your side.'” That contractor, Huff Contracting, agreed.

Dan Levi from Levi Architecture, who did the architectural work on this project, will also be participating in the pilot program, training workers side-by-side.

Unfortunately, there’s not enough time to implement the pilot program for this project. The project experienced unexpected obstacles which caused delays and required a bit of a fight on Anderson’s and Dunn’s part to remove them, thus construction needs to happen quickly. But the pilot program will be implemented in the future.

Support for the project has been great from the community and beyond.

The City of Waterloo has been helpful. Mayor Quentin Hart suggested the current location, which has more traffic and visibility than the original one and is also located in an opportunity zone.

Anderson and Dunn are anxious to see this project completed by July/August 2021.

“This is the area where we’re from, were born and raised, so we have a definite passion to make sure that we give back to our community,” said Dunn. “We want to make sure that we are an example for the younger generation to say, ‘hey, we know these guys, they’re from the same place that we are from and they were able to do this in their community’ and so we want to be an inspiration to the younger generation.”

Anderson, who also actively gives back to the community, agrees. “It’s not for us. It’s an investment into a legacy.”