The face of the Iowa House could be changing soon, and hopefully it may begin to mirror the face of the diversity in our state. It is evident that more and more women are getting involved in politics. More women are running for office, but still, women in the Iowa Legislature make up only 30% of the entire body, while women are about half of the state’s population.

“We need more women and people of color more actively involved,” Christina Blackcloud told me in a recent interview.

People of color are motivated to run for office when they see others have made it there too. Christina Blackcloud started thinking about running for office when she was a volunteer door knocking for Barack Obama’s campaign. In 2012 she ran for the Iowa House of Representatives in District 72 and lost the primary by 58 votes, but that did not deter her from running again. Christina ran again this year, won the primary, and is now running for the seat currently held by Republican Iowa Rep. Dean Fisher.

The district covers all of Tama County and part of rural Marshall County. 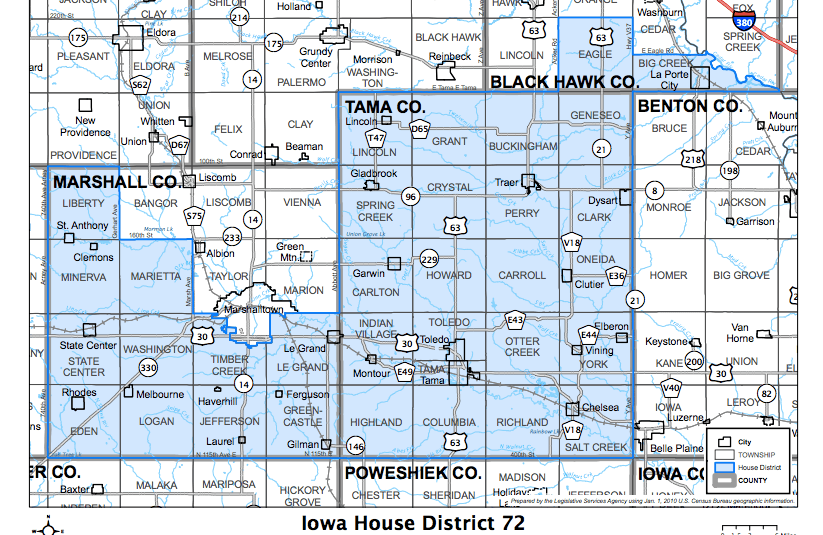 Blackcloud is a Native American and a member of the Sac and Fox Tribe of the Mississippi in Iowa (The Meskwaki Nation). She served as an intern to Sen. Tom Harkin in Washington, DC and for the Office of Ethics for the USDA. Christina has over fifteen years of tribal government experience of serving people and being fiscally responsible in proposing and allocating funding to meet the needs of the people. She holds a dual bachelor’s degree in Business Administration and Human Resource Management.

Besides the challenges of being a woman, Blackcloud faces another challenge, one of perception.

Among one of the biggest concerns for residents in her district is education.

“One of the biggest problems people face with education, especially with the pandemic, is that classes are held virtually but not everyone has access to internet, whether it is because people live in rural areas where the connection is not reliable or for others is an issue of affordability,” said Blackcloud.

Economic development is also a particularly important issue for Christina — many small towns depend on small businesses and she wants to help revitalize the economy in her area.

“One of the reasons I’m running is because there are so many viewpoints out there, so we need a representative to be able to listen to those views, and I am hoping that I’m one of those people that listens to all the views, not just the women, not just the businesses, but all the views of my district, and bring those views into the Statehouse so laws are created based on that,” she said.

Another issue that the Tama area faced during the pandemic was a large outbreak of COVID-19 at one of the local packing plants. Unions are backing Christina because they want to see safer working places and the government taking steps to protect workers.

“When COVID-19 hit, it seemed that the real numbers were not reported properly, and workers were not safe. We had many meat packing workers getting sick,” Christina told me.

Fisher, her opponent, has represented the district for four terms now. While he has won by large margins in three of those, his first race was decided by just about 200 votes. The rural district has trended more Republican lately, but Christina has raised a large amount of money — nearly $70,000 in the recent fundraising report — to compete here.

“There are many differences between the current Representative and me,” she said. “One of the big differences is that I have the education and experience working within the communities here, either with the Meskwaki on the settlement, working with different people, making sure things are getting done and I want everyone to be included and treated respectfully.”

I do agree with Christina, we need community members to get involved, to make the effort and learn about candidates like her. We need to start having conversations about who and how we want to be represented.  We also must look at the growing diversity in our state and include more women and people of color in the pipeline to government in its different forms.

Representation in government makes Iowa not only better but more prosperous and innovative. Inclusion means not only supporting candidates, but also mentoring them, and opening doors for them.

Social media posts and BLM signs are nice gestures, yet we need actions behind them. Times and demographics are changing. Government, businesses, and other sectors must adjust if we want a state that folks want to move to and build a life in.

I am excited to see a new Iowa House picture with faces representing all communities. I am excited to hear about new ideas and to learn of Iowans who want to represent in an inclusive manner.