Instead of handshakes, there were elbow bumps. Rather than town hall meetings and rallies, small groups gathered on their own turf: on a farm, a union hall, a local restaurant.

For Democrats, campaigning amid the coronavirus pandemic means meeting people where they are.

Theresa Greenfield saw Iowans in their element on Thursday as she visited three towns in Southeast Iowa with less than two weeks until Election Day. More than 649,000 Iowans already have cast their ballots, but there still are votes to be earned.

“I have to tell you, winning in a state like Iowa is sort of like eating an elephant, you’re going to get one bite at a time in lots of different places,” Greenfield said Thursday morning on the 880-acre Seyb family farm in northern Lee County.

The three Mississippi River counties Greenfield visited are crucial for a Democrat in a statewide race. Lee, Des Moines and Muscatine counties voted for Donald Trump in 2016. Two years later, two of the three flipped back to the Democratic column in Fred Hubbell’s race for governor. To unseat Sen. Joni Ernst, Greenfield not only needs to run up the margins in the state’s largest counties, but narrow the gap in rural areas and win back former Democratic strongholds in Eastern Iowa. Earlier this week she was in Ottumwa, Fairfield and Washington.

“I stick to the issues that I think Iowans care most about,” Greenfield said. “I got asked recently what kind of Democrat I am. I said I am a pragmatic, common sense, scrappy firm girl. There’s got to be room for that in the party. That’s who Iowans are. They want good health care, they want to earn a profit with their small business … they just want to work hard. They want a fair shot.”

On the farm, Greenfield was treated to a homemade pie by Beth Howard, made with Arkansas black apples grown in Montrose, 16 miles south of the Seyb’s homestead. Peanut, the aptly-named family dog, greeted the press and friends of the family, and with the help of some apple peels, Greenfield was able to coax Chaps the goat out of the barn.

Farmer Dennis Seyb had one “burning question” for Greenfield, and it wasn’t about politics. He wanted to know the classic car featured in some of her TV commercials.

“That’s a 1978 Chevy Nova,” Greenfield said. “My first husband bought it right off the showroom floor.”

From Lee County, Greenfield headed north to the IBEW Hall in Burlington. There, she was met by union members and given a tour of the training facilities by Jacob Nye, the business manager at IBEW Local 13.

“I told my daughter I was going to see you today and with all the commercials on, it’s almost like seeing a superstar,” Ryan Drew, business representative for the International Union of Operating Engineers Local 150, told Greenfield. “I put you in the same category because we need a good senator that understands what’s important to working class people.”

Four years ago, unions in Burlington and across the country saw their members reject Hillary Clinton in favor of Trump, giving him the edge he needed in the Upper Midwest to pull off an upset victory.

This time around, Nye said union leaders are “trying to educate our members on not necessarily what’s being said on either side, it’s what’s being done and what’s been done in the past — what was done in an Obama-Biden administration to support labor unions and union members’ rights to collective bargaining. It’s getting gutted currently, and I think we’ve done some great things in educating our members about that.”

Of Ernst, Nye sees the senator as someone beholden to “corporate money in politics.”

“That’s a damaging thing for her,” Nye said. “To take money from the insurance companies, pharmaceutical industry. We just talked about health care being one of the biggest priorities. If that’s who’s funding your campaign, that’s not going to work out for me. I’m smart enough to see through that.” 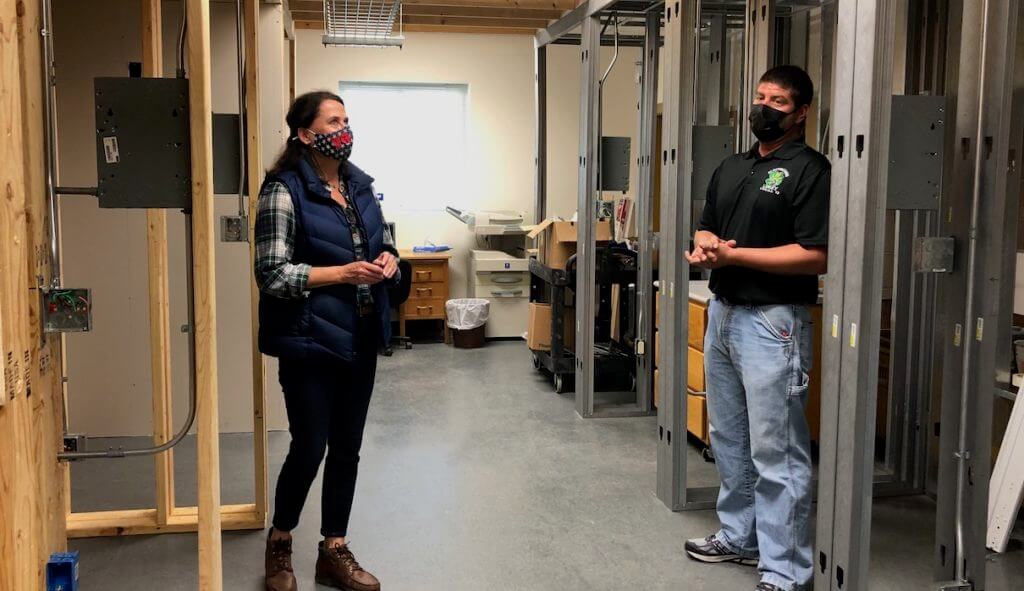 From Burlington, it was on to West Liberty, Iowa’s first majority Hispanic town. A colorful mural indicative of the small town’s diversity greets people as they enter downtown: “You Belong Here” and “Tu Pertences Aqui.”

Business owners and local leaders greeted Greenfield at Puebla, a downtown Mexican restaurant. Among them was Jose Zacarias, a Mexican-born immigrant who came to West Liberty in 1984 to work for West Liberty Foods, a turkey processing plant. It took Zacarias 12 years to become a U.S. citizen once he started the arduous and expensive process. When his citizenship was secured in 2011, he ran for city council, a position he still holds.

Inside Puebla, where patrons filtered in and out to sit down and pick up to-go orders, Greenfield fielded questions from the small, masked group, ranging from health care and education to immigration, ethanol and coronavirus. The supporters applauded her for “positive, solutions-oriented ads” and the “great campaign” she was running against Ernst, who often narrowly trails Greenfield in polls. 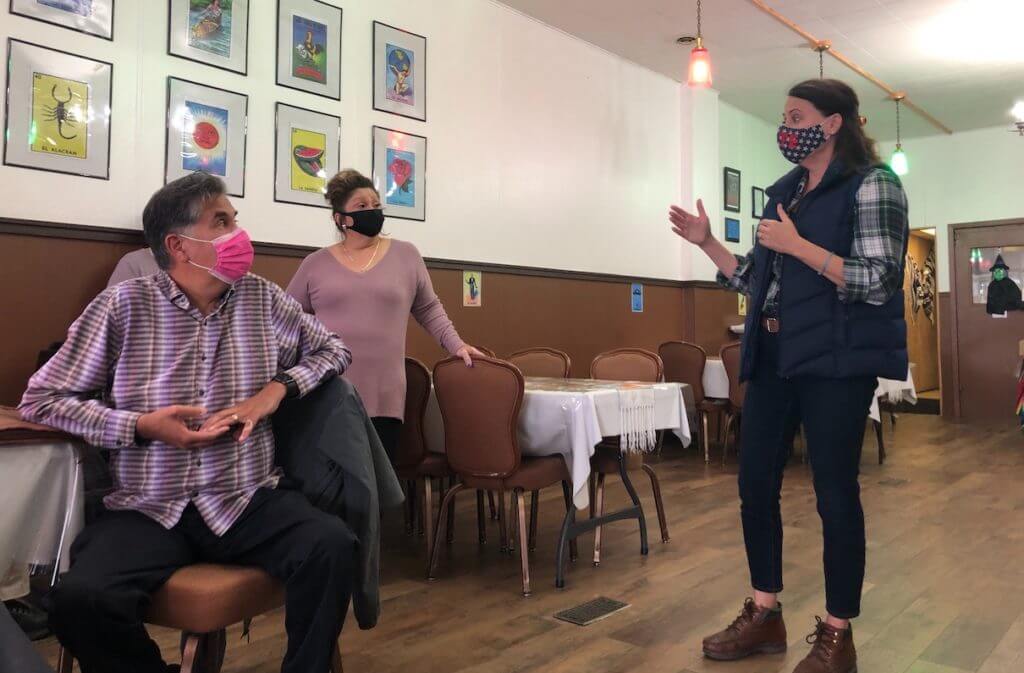 With 11 days to go until the final ballots are cast on Nov. 3, Greenfield isn’t taking anything for granted.

“Our state is made up of independent thinkers and independent voters,” Greenfield said. “They’ve shown it over time, whether it’s electing Democratic Sen. Tom Harkin and at the same time reelecting Republican Sen. Chuck Grassley, this is what Iowans have done. I have gone out there — and am going to continue to go out there until the polls close — and ask everybody for their vote.”