In Zaun’s latest TV ad attacking his Democratic challenger Rhonda Martin, the incumbent Republican senator uses a photo of four workers on a construction site that appear to be a Ukrainian stock photo image. A reverse image search of the workers link to a series of stock photos shot by Evgeniy Shkolenko. Getty Images says the location for the photos was Ukraine.

Amusingly, most sites describe the short video clip of the workers posing as “happy workers,” though that does not seem to be mood being conveyed in Zaun’s ad.

“The COVID crisis hit Iowa’s working families and small businesses hard,” the narrator in Zaun’s ad says. “The recovery is underway, but Rhonda Martin’s extreme agenda will set us back even more.”

At the end of the ad, a different person pops up on the screen next to a scary-looking Martin: a younger man in a suit, sporting a look that’s not the usual fashion of voters in Zaun’s district that covers Johnston, Urbandale and Grimes. It also appears that he’s in an underground tunnel of some sort. Image searches on him don’t turn up anything. 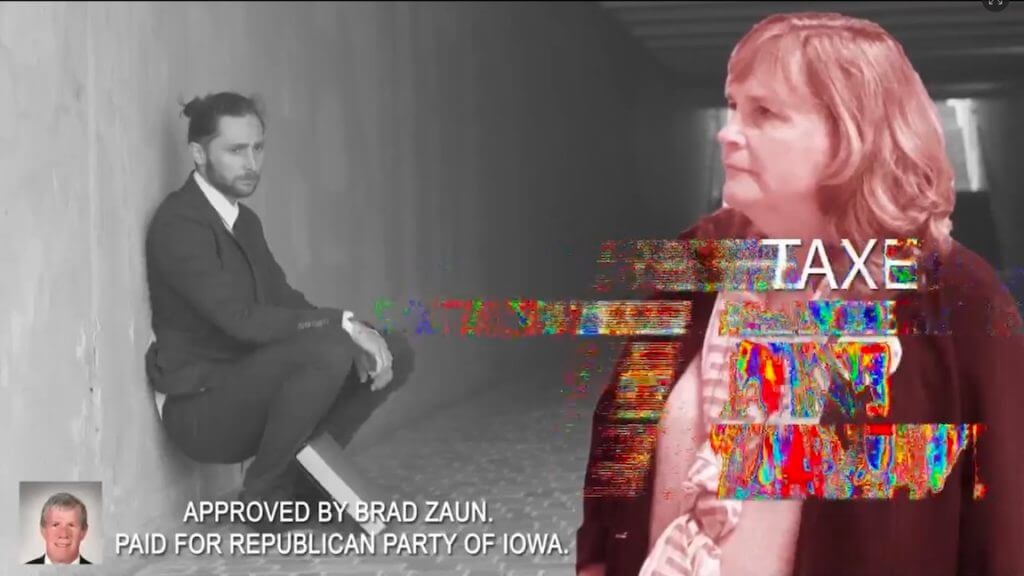 It is of course not uncommon for candidates to use stock photos in their campaign ads. Well-run campaigns do, however, usually put together a photo and video shoot of people who actually live in the district — or at least in the state — of where the race is located. Or they use stock images that aren’t from a foreign country.

Zaun’s Senate District 20 is in play this year, one of the few remaining suburban districts in the state held by a Republican. Democrats now hold both Iowa House seats contained within the Senate district.

Martin is a Johnston City Councilmember who has been running a strong campaign throughout the year, putting up good fundraising totals early in the year and running a large volunteer effort in the district.