Iowa Sen. Joni Ernst said Sunday there is “no reason” President Donald Trump “shouldn’t be out and about” campaigning if he has tested negative for COVID-19, the highly infectious respiratory disease he was diagnosed with on Oct. 2.

“He should be negative, and if that’s true, there’s no reason he shouldn’t be out and about,” Ernst said in Davenport, responding to a question from Starting Line about President Trump’s upcoming rally in Des Moines. “We would just advise everybody to make sure you are following the proper precautions whenever you do attend events like this — make sure you’re wearing a mask, using hand sanitizer.

The American people, however, do not know when the president last tested negative for the coronavirus. Since his diagnosis nine days ago, the White House has not disclosed the date of Trump’s last negative test, leaving people to question whether he actually is free of the virus, as he claims.

Trump’s planned Wednesday rally at Des Moines International Airport comes as Iowa is faced with one of the worst rates of coronavirus in the nation, with a statewide positivity rate of 11.6%. The number of hospitalized patients now is higher than the worst points in the spring, with 449 people hospitalized as of Sunday evening.

Ernst, speaking to reporters in Davenport as part of Joni’s Ride Across Iowa — a multi-city tour in which Ernst rode her motorcycle from Sioux City to Davenport and held six events — said she will not attend this week’s rally because the Judiciary Committee is set to begin nomination hearings tomorrow on Supreme Court nominee Judge Amy Coney Barrett. Ernst and Sen. Chuck Grassley serve on the committee tasked with questioning Barrett and voting on her nomination before it can go before the full Senate. 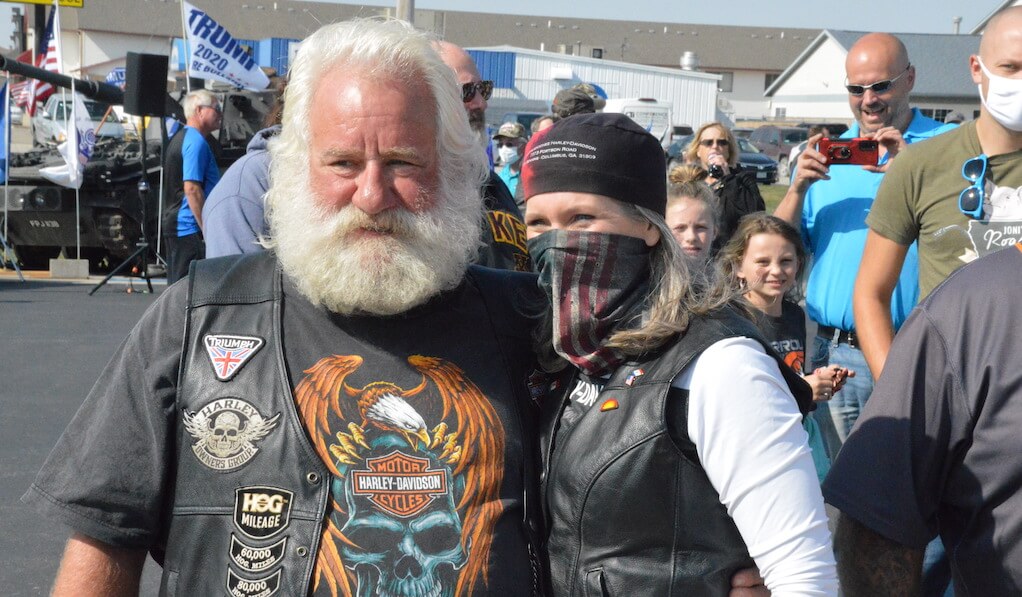 On Saturday, during her event at Harley Davidson in Carroll, Ernst said it would be “smart” to test members of the committee for COVID-19 ahead of the nomination hearings, which will consume several hours each day the committee convenes this week.

“I hate to do (testing) without having reasons to do so,” Ernst told reporters, “but I think if we’re going to be working in close proximity over long hours, it’s probably a good idea.”

At each campaign stop this weekend, Ernst spoke with reporters, took pictures with supporters and addressed the Iowans gathered to hear her speak. Along the way she had various Republicans introduce her, including former Gov. Terry Branstad, Gov. Kim Reynolds, Grassley and State Rep. Ashley Hinson, the Republican candidate in Iowa’s 1st Congressional District. 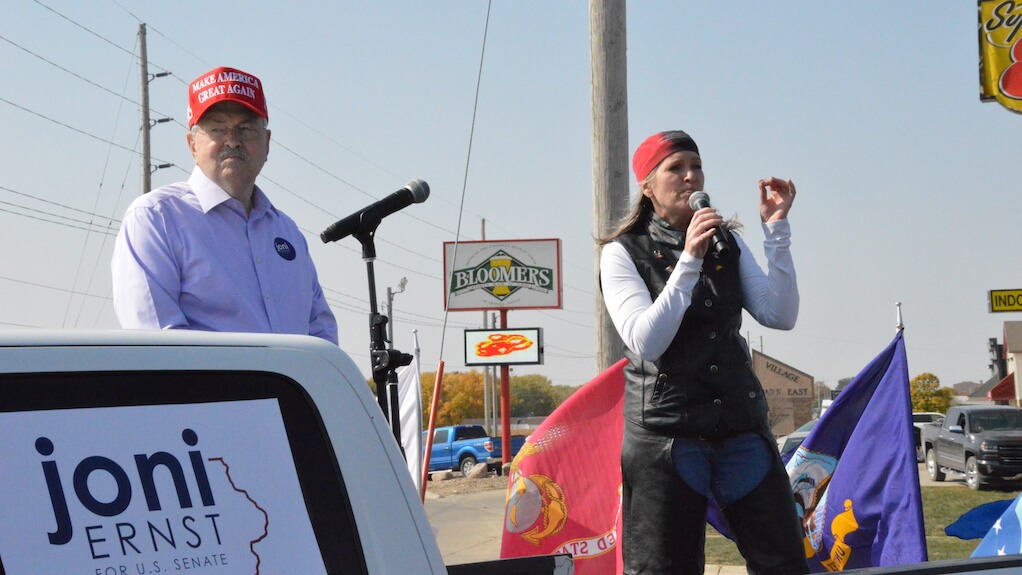 Ernst’s stump speech — more than once delivered from the bed of a pickup truck — was concise and largely focused on denouncing her opponent, Theresa Greenfield, and warning voters about Democrats’ “pathway to socialism.”

When the senator wasn’t talking about Greenfield and nationally-known Democrats, Ernst told the crowd she will continue to fight for farmers, veterans, “working families and single moms,” and survivors of sexual assault and domestic violence if elected to another six-year Senate term.

Despite Ernst’s confidence the Senate will stay in Republicans’ control, a poll released today from CBS News and YouGov found 47% of likely voters intend to cast a ballot for Greenfield compared to 43% who said they support Ernst.