The damage caused by last week’s derecho was so widespread in Iowa, it overwhelmed many communities’ usual ability to help their neighbors recover from a disaster. Fortunately for places like Cedar Rapids, volunteers from nearby cities have stepped up to fill in the gaps of what some locals have said was a slow-to-develop local and state government response.

“I was watching news at 10:00,” said Rodney Anderson, “sitting down on my comfortable couch and I just heard God say, ‘Move. Do something.’”

After thinking about it for 30 minutes, Anderson picked up his cell phone and sent a text to 60 people he knew. Some got back to him that night. Others replied to his text in the morning, asking how they could help.

The mall that Anderson, a land developer, referred to is one on Franklin Street in Waterloo that he owns. It contains Earth’s Beauty Supply, 2 Scoops Ice Cream, and Taqueria Los Reyes.

Anderson’s call for items spread like wildfire. He was getting so many donations, he had to recruit volunteers to help.

“We worked Monday all day, Tuesday all day, and Wednesday to get everything situated so we could go to Cedar Rapids,” said Anderson. “I didn’t know how to get all that stuff together, but Joyce Levingston, she came through with flying colors.”

Levingston is the director of the Momentum Urban Employment Initiative program offered by One City in Waterloo and a doctoral student at UNI. While Anderson knew he wanted the first stop to be Cedar Terrace Apartments—an apartment complex with a large refugee population, mainly from East and Central Africa and Micronesian islands that had been one of the hardest hit by the derecho—he left the rest to Levingston.

Levingston had experience doing this so she was a great resource. She had been in southeast Cedar Rapids the past weekend with Viviens Soul Food restaurant, Ricki Campbell from Waterloo and others distributing donations.

In addition to Anderson and Levingston, the group included Lance Dunn with the City of Waterloo, Rev. Marshaundus Robinson of Impact Church, Rev. Morris Anderson of New Hope Missionary Baptist Church, and young helpers. Jamie Sallis came along to help with unloading.

When the U-Haul and other vehicles arrived at Cedar Terrace Apartments, the complex looked different than it had last week. The tents were gone. Debris was being loaded into a dump truck. A small group was loading a friend’s mattress and other personal belongings into a couple of vehicles. 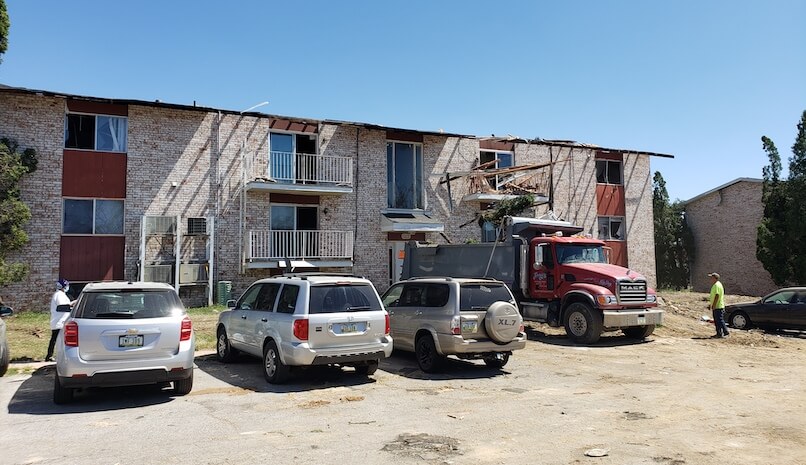 “We’ve called around,” said Suzanne Murphy, the apartment manager. “We have found some places or potential places for people to rent. We own more property in Coralville. We have places there that a few people have agreed to relocate and their job would be all right, as well.”

According to Murphy, the company that owns the complex also owns a company that makes roofing tiles in Washington, Iowa and has found a house for one of the displaced families there and hired them. Security deposits have been returned to all and she’s given references.

But are people still living in the unsafe buildings?

“No,” said Murphy. “Well, most of them are pretty much trying to move their things out before the buildings are boarded up.”

Those living in the buildings deemed safe still don’t have electricity.

Which may have explained why a line had formed within minutes after the U-Haul’s doors rolled open.

“We’ve got a lot of diapers, wipes, paper towels, toiletries, batteries, flashlights, a lot of food, water and other items just to help the families out down here,” said Levingston.

“We put this together, kind of at the last minute, you know,” said Greg Hearns, President of Iowa City Federation of Labor and an organizer of the relief effort that began on Monday. “We’re working from the seat of our pants and the response has been great, fantastic.” 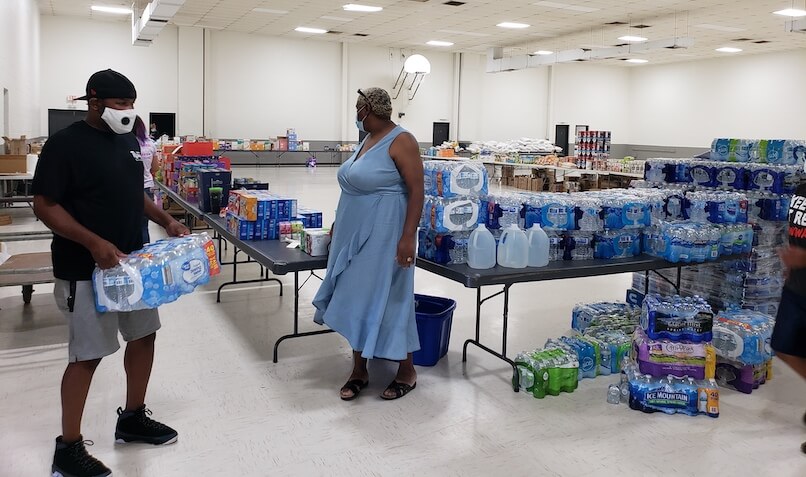 They’ve gotten the word out via social media and word of mouth. Volunteers working on neighborhood projects identified places in need.

Royce Ann Porter, a Teamster and a Johnson County Supervisor, has also helped identify neighborhoods in need. Some of the places they’ve delivered to are Cedar Terrace Apartments, Robert E. Schorg Manor, and mobile home parks.

“There’s so many people,” Porter said. “I’m in three different women’s groups and they’re letting everybody know where they’re going and where they’re reporting to so that we don’t duplicate the same services.”

They have no idea how much they’ve collected because donations keep coming in.

Even after the 20 minutes or so at Cedar Terrace Apartments, the U-Haul still looked full. It took an assembly line of people about 25 minutes to unload it. Porter mentioned that Robert E. Schorg Manor needed more help, so the caravan headed there, unloading goods filling the other vehicles, at the low-income apartment for the disabled and elderly, who were still without power. 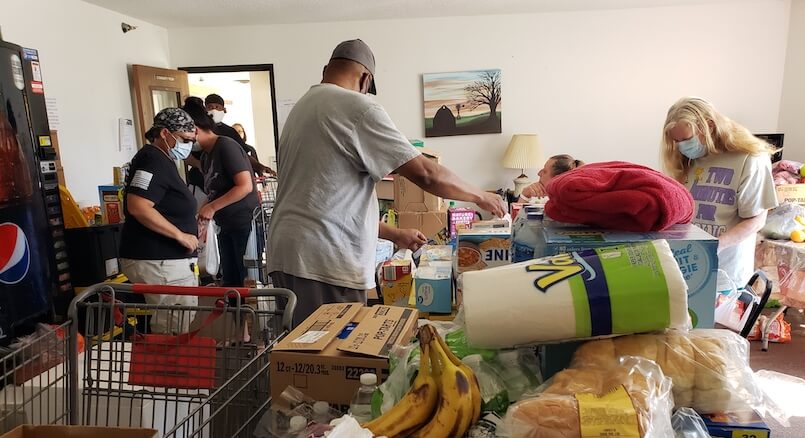 The last stop was the Hy-Vee in southeast Cedar Rapids.

Signs of improvement were evident in southeast Cedar Rapids. Trees blocking streets had been removed. Many of the trees that had been on power lines or houses were gone. Many of the residents previously interviewed had power that had just hours earlier been turned on. Some people had power but were unable to use it because of old wiring or, in the case of Wendy Cook, her meter had blown off. But a lot of others still didn’t have it.

Another new sight was a neighborhood resource center in the parking lot across from St. Paul’s Methodist Church. It is one of five established by the city. Numerous tables were set up and staffed by volunteers of organizations that provided assistance with substance abuse or mental health issues, completing disaster assistance grant forms, provided fresh meals, foodstuffs, water, and more. Crisis counselors, Mathew 25, and Iowa Legal Aid were also represented.

“It’s really being a friendly face to people, being reassuring, making sure they are not shy about getting what they need,” said Eric Pate, a volunteer who helped set up the site. ”We’re hoping that this is the center for help in the neighborhood.”

The center will be there all week and may be extended beyond the week.

Anderson feels good about the experience.

“We all worked together. It was black, it was white, it was brown, it was Latino, it was Asian. We all worked together to fill that U-Haul up,” he said. “And that was just the items. We had cash. People are still cash-apping me. I’m having to send it back. Because, I’m like, okay, we’re done.”

They may be done but Anderson, who makes it a point to give back to the community, is open to doing it again.

“We had the U-Haul. We had another pickup truck. We had a van. We had a SUV. We had four vehicles, all packed with stuff. We got rid of everything,” said Anderson. “We really made an impact today. I feel really good about that.”