Since Sept. 1, Marion County, Iowa has seen its first three COVID-19 fatalities. County Public Health officials said during a recent press conference that two of those deaths were of people over 80-years-old with pre-existing conditions.

But the other was Melinda Mutti, a 55-year-old Pella resident who was a substitute teacher in Knoxville and Pella Community School Districts. She was an educator with a fervor for the Spanish language and felt most connected to the students at Knoxville High School, according to her sister Ann Visser.

Mutti passed away in the early morning of Sept. 3. The previous day she felt extreme fatigue, sick enough to take an ambulance to Pella Regional Health Center. Visser said that when doctors at Pella saw her sister, they knew she had to be transferred immediately to MercyOne Medical Center in Des Moines, where she just made it through the night.

Visser, a nationally renowned retired Pella High School English and journalism teacher, spoke with Iowa Starting Line on Tuesday afternoon after her own release from Pella Regional, where she had spent 13 days fighting COVID-19. Unsure of where they became infected with the virus, the 63-year-old was insistent that her sister did not get it at school, where she had subbed one day this year thus far.

Mutti had moved to Pella about a year ago from Illinois to be closer to Visser and had been subbing in the area for about a year.

“I have a lot of friends. I am so blessed that I’ve lived here for a long time … but to have somebody just to go get ice cream with,” Visser said of her sister. “We went almost every Sunday just to just have ice cream. And we would watch the Kansas City Chiefs and we watch Netflix. And we sat on my porch and I told her almost every day that I saw her how happy I was that she had made the decision to move here. And that was a blessing. We were closer during this past year than we had ever been in our lives.”

The news of Mutti’s death wasn’t disseminated by Knoxville nor Pella School Districts, and neither district has reached out to Visser after her sister’s passing, she said. But the former journalism adviser expressed gratitude for the schools in giving Mutti the opportunity to teach in a place where the two could be so close.

“I want to reach out to them, though, and thank them for giving her that opportunity to feel appreciated and needed, really. But she did. And that she needed that,” Visser said. “She took her substitute teaching so seriously and wanted to make sure that she was trying to do the very best job she could.”

On social media, Mutti’s death circulated quickly. A Knoxville High School teacher who has requested to remain anonymous said she couldn’t at first figure out where she had heard Mutti’s name at first.

“I woke up from a dead sleep on Saturday night and I thought, she subbed for me! I know who she is! Because a lot of times when you have subs, you see their name on the lesson plan. Her face on her obituary looked familiar because she had subbed for other people in our building too, but she subbed for me,” the teacher said.

For that Knoxville teacher, the news of Mutti’s passing as an educator was significant, especially during a time when Knoxville School District’s transparency with its teachers and community about the gravity of the virus has fallen short while leadership remains politically charged and silent when faced with inquiries.

Nearly everyone Starting Line spoke with for this story lamented that the pandemic had quickly become “political” in the deeply Republican county located just southeast of the Des Moines metro.

“In our district, we’re not getting a ton of information,” said the Knoxville teacher.

“Some districts are doing press releases when there are positive cases — we have no idea. And the way our superintendent has been communicating data has changed multiple times. Like the first week, she put out something that was like .44% of our student enrollment [were positive]. It’s somewhere probably between 6 and 9 kids, but why can’t you just tell us? What’s the big secret?” 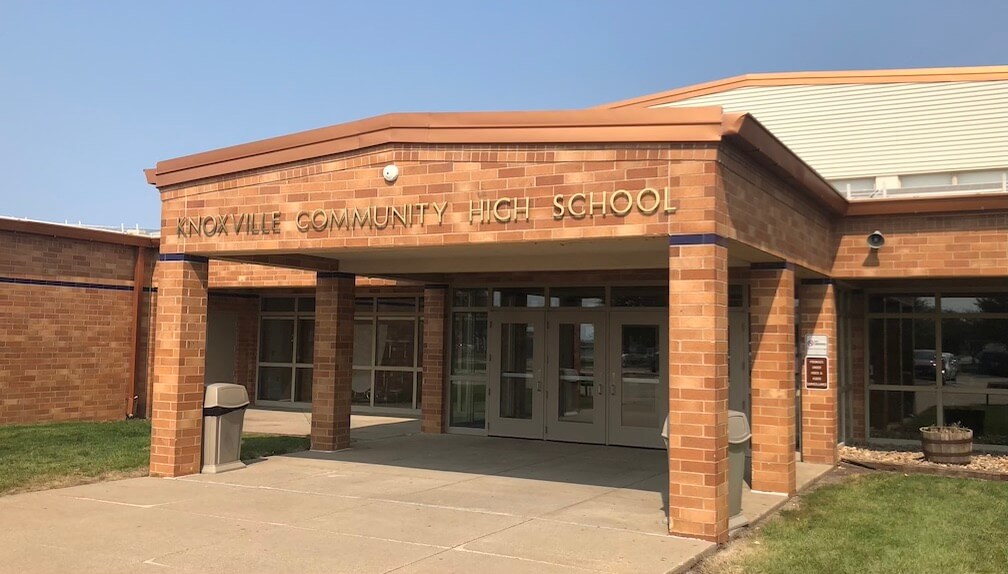 Aside from now having experienced the death of an educator, Marion County is home to Twin Cedars, one of the very few districts in the state that was granted an online-learning waiver early in the school year due to significant COVID-19 spread. Knoxville Community School District has also seen a number of staff absences since the start of school, which comes as Knoxville Superintendent Cassi Pearson has said that educators in the district are considered essential workers, with exposed teachers allowed to return to work if staffing shortages exist as long as they remain asymptomatic.

Megan Suhr, a mother of children who attend Knoxville School District, said she’s been alerted to teachers who have been sick, who public health suggested stay home, but the school requested they still attend school.

“I know we’re short-staffed on substitutes and that’s an issue. We started off the school year with seven out of the third-grade wing that were gone. Last week there were a bunch gone from the middle school,” Suhr said.

Knoxville’s school district does have a mask mandate for students and staff, which is why Mutti was encouraged to return to school this fall.

“We talked about before school started about whether or not she wanted to put herself in that situation. And she felt very good about both Knoxville and Pella school districts [that were] requiring masks for their students,” Visser said. “She really felt like they were making an effort to make sure that they were protecting their teachers as well as their students and really caring about the whole school community.”

But community members and teachers are speculating what COVID numbers are in schools, but there is no certainty. Ryan Richardson, a science teacher at Knoxville High School said the number of kids in and out based on their COVID exposures regularly varies.

“I don’t have any numbers, but anecdotally, there was one teacher that I talked with a little bit over lunch who said he had more students remotely zooming into class [in the past week] than he had in person,” Richardson said.

“These numbers don’t really mean anything if we have no idea how many people they are counting,” said a Knoxville High School teacher who requested anonymity.

Pearson, along with her administrative assistant Lisa Willis, have not answered multiple requests for positive case numbers from Starting Line.

Marion County Public Health Director Kim Dorn told Iowa Starting Line that her department has no specific COVID-19 information for Knoxville’s community school district — that all virus data is looked at on the county level. The latest updates from the county read that on Sept. 15 there were 17 new cases, bringing the total up to 675 COVID-19 positives in Marion.

This includes over 82 positive children, aged 0-17.

Ames resident Sara Willette, who runs Iowa COVID-19 Tracker and is contracted with Iowa School Education to track school COVID absences said that Knoxville is one of about 50 school districts who have refused to answer her inquiry about COVID rates.

And Knoxville is unique in the area for its lack of transparency. Nearby in the county, Pella has supplied their district with a dashboard for student and staff absence metrics.

“They’ve made a dashboard and now other school districts like Gilbert, Durant and Clarinda have too. Other districts have said they’re now sending full updates to their communities every week, not just when there is a positive,” Willette said.

From Knoxville’s school district, there has been little communication with staff about how often they will receive updates on absentee rates.

Lack of Concern from Leadership

While communication with staff has been spotty regarding absentee rates, Superintendent Pearson has alerted educators about other issues, like their silence on social media.

In an email at the beginning of the school year, Pearson told all staff to refrain from social media posts relating to COVID.

“I know some community members will probably take shots at us on social media; however, the hospital and other essential businesses have weathered this and so will we,” she said. “Staff, please refrain from any social media posts regarding to COVID-19 at this time — the people reading it don’t know the entire situation and some tend to make assumptions and sometimes create lies to elicit fear from others.”

Pearson also asked staff not to share their own health status publicly as it may create “additional challenges.”

This advice from the district has concerned some teachers and community members, however.

“Teachers are getting sick. We just had a local substitute that passed away. I don’t know what to say,” said Suhr.

Suhr’s two children have opted for online learning in Knoxville this year, and the councilmember said she’s one of the only parents who attend school board meetings to advocate for more transparency and better mitigation strategies in the district.

But silence isn’t extended to other local officials. Marion County Public Health Director Kim Dorn has shared on her own Facebook page information against proper public COVID-19 mitigation, including an article in August suggesting mask-wearing is not helpful in stopping virus spread. 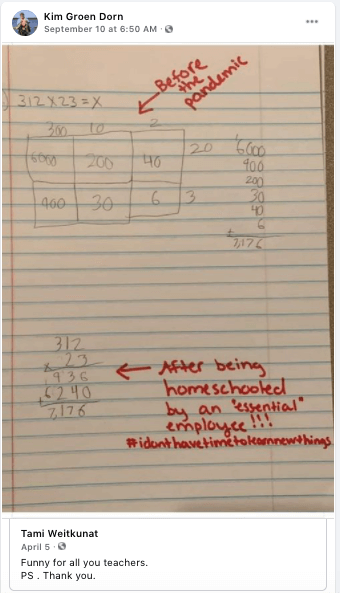 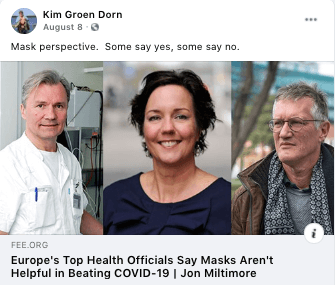 “What about masks? Lots of conversation going back and forth about masks, I’m going to be very blunt, I’m a mask skeptic,” he said on July 15 while filming a COVID-19 update.

Then, in a September update, Raymie said to social distance, wash hands and wear a mask, but only if community members are comfortable.

“As far as wearing a mask goes, if you can’t socially distance, wear a mask. If you’re not comfortable, wear a mask. That’s okay. Don’t shame and don’t bully people who do or don’t. Let people take responsibility for their own health. I’d rather live in freedom than fear,” he said.

Visser said she and her sister were diligent about wearing masks and taking other necessary precautions and still contracted the virus, noting how important it is for everyone in a community to comply with public health standards.

“I see so many people just pretty much making trash of the guidelines and the suggestions and they’ve got this wonderful chance that they’re not going to lose their sister or brother. And here we were and we were just trying to do what was right and be respectful of others. And for whatever reason, that didn’t work out for us,” said Visser.

The retired teacher also stressed the severity of the virus.

“At a point, I was so sick that I don’t think I even comprehended what was happening in my world. And I don’t think Melinda did either …I just think that we all need to know that we could be tomorrow’s victim.”

4 Comments on "A Substitute Teacher’s Death Shakes Knoxville, Where COVID Is Political"