After a flow chart released in late July by the Iowa Department of Education implied that asymptomatic educators could return to school after a positive COVID-19 test, social media buzzed with growing concern from parents and teachers ahead of the upcoming in-person school year.

The chart, which instructs school students and staff on how to evaluate potential COVID-19 infections, said that staff may be considered critical personnel and can be allowed to return to work if staffing shortages exist as long as they remain asymptomatic. Many, however, wanted clarification for educators on several fronts.

Administrators in Columbus Junction and Knoxville provided that clarification, reiterating school staff’s essential worker status, suggesting they could require teachers to return to the classroom. 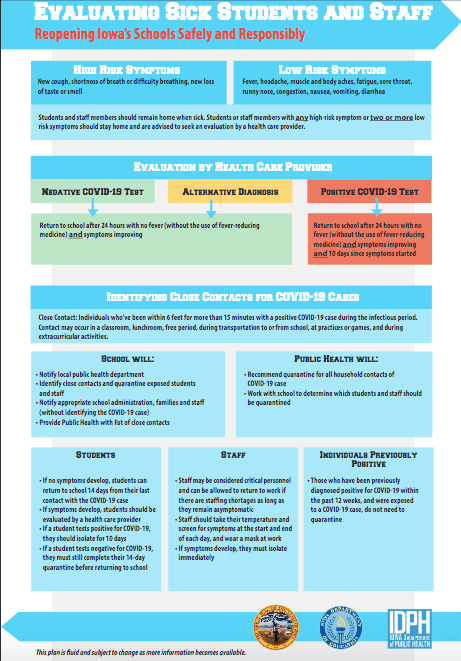 “Per our protocol, any KCSD employees who have been exposed to someone who has tested positive for COVID-19 and do not have any symptoms may be required to continue working while following stringent precautions,” said Knoxville Superintendent Cassi Pearson in a recent letter to families.

“Nearly all employees of the district are considered essential,” the letter said, citing guidance from the U.S. Department of Homeland Security. 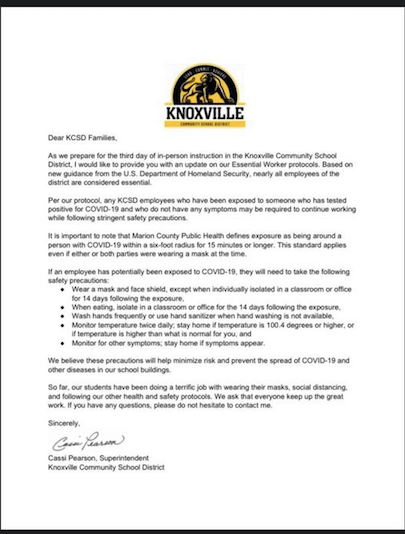 In Columbus Junction, a teacher at a district elementary school told Starting Line that when a colleague asked for clarification on the state chart at a staff meeting, they were told by administration to continue coming to work, even if they were exposed to COVID but were asymptomatic.

The IDE chart highlights that any educator or student who receives a positive COVID-19 test can return to school after 24 hours with no fever (without the use of fever-reducing medicine) and symptoms improving and 10 days since symptoms started.

This comes as the Center for Disease Control on Tuesday modified their testing guidelines to no longer encourage people who are exposed to coronavirus but are asymptomatic to get tested. The changes have been alarming some health officials, especially after the World Health Organization last week announced that COVID-19 is spread largely by younger people, many of whom are unaware they are infected.

“All of the best evidence suggests that people without symptoms can and do readily spread SARS-CoV-2, the virus that causes Covid-19,” the Harvard Global Health Institute told Statnews in June.

“In fact, some evidence suggests that people may be most infectious in the days before they become symptomatic — that is, in the presymptomatic phase when they feel well, have no symptoms, but may be shedding substantial amounts of virus.”

COVID-19 rates are currently spiking in the state, with hospitalization numbers surging to rates hit in early June. Forty-nine new patients were admitted into the ICU in the last 24 hours as universities and schools around the state begin reopening.

Ames resident Sara Willette runs Iowa COVID-19 Tracker and said teachers have reached out to her from Muscatine, Mahaska and Pottawattamie counties who have been told similar things about coming into school if COVID-19 positive but asymptomatic.

Willette also highlighted the state’s calling educators “critical workers.” Currently, the Department of Homeland security lists critical infrastructure workers as those in healthcare services, pharmaceutical and food supply, tasking them with a “special responsibility to maintain [a] normal work schedule.”

The Iowa Department of Education chart said that school staff may be considered critical personnel if there are staffing shortages.

“One of my Muscatine teachers was told that they’re critical workers, not essential workers,” Willette said. “There’s a difference between working in a surgery ward in a hospital and getting paid $150 to $300 thousand dollars a year and being a teacher. If you’re a first-year teacher or a third-year teacher, you’re not making that much money. You’re definitely not making enough money to be on the front lines of a virus that’s going to kill somebody.”