Nduwimana Kanumba’s entrance into the world was rough. At five days old, a derecho tore through his family’s Cedar Rapids apartment, ripping off their roof and bringing debris crashing down onto his crib. His mother suffered a gash on her shoulder during the storm while protecting him in her arms. She and Kanumba’s two older brothers all spent days in the hospital from wounds they sustained as their home collapsed on them.

“We’ve had to fend for ourselves,” Nduwimana Vyamungu, the boy’s father, told Starting Line through a translator while showing us the wreckage of his apartment on Friday evening. A refugee of Congolese and Burundian heritage, he specifically pointed out the bloody rags left on the ground that were used to stop family members’ bleeding. 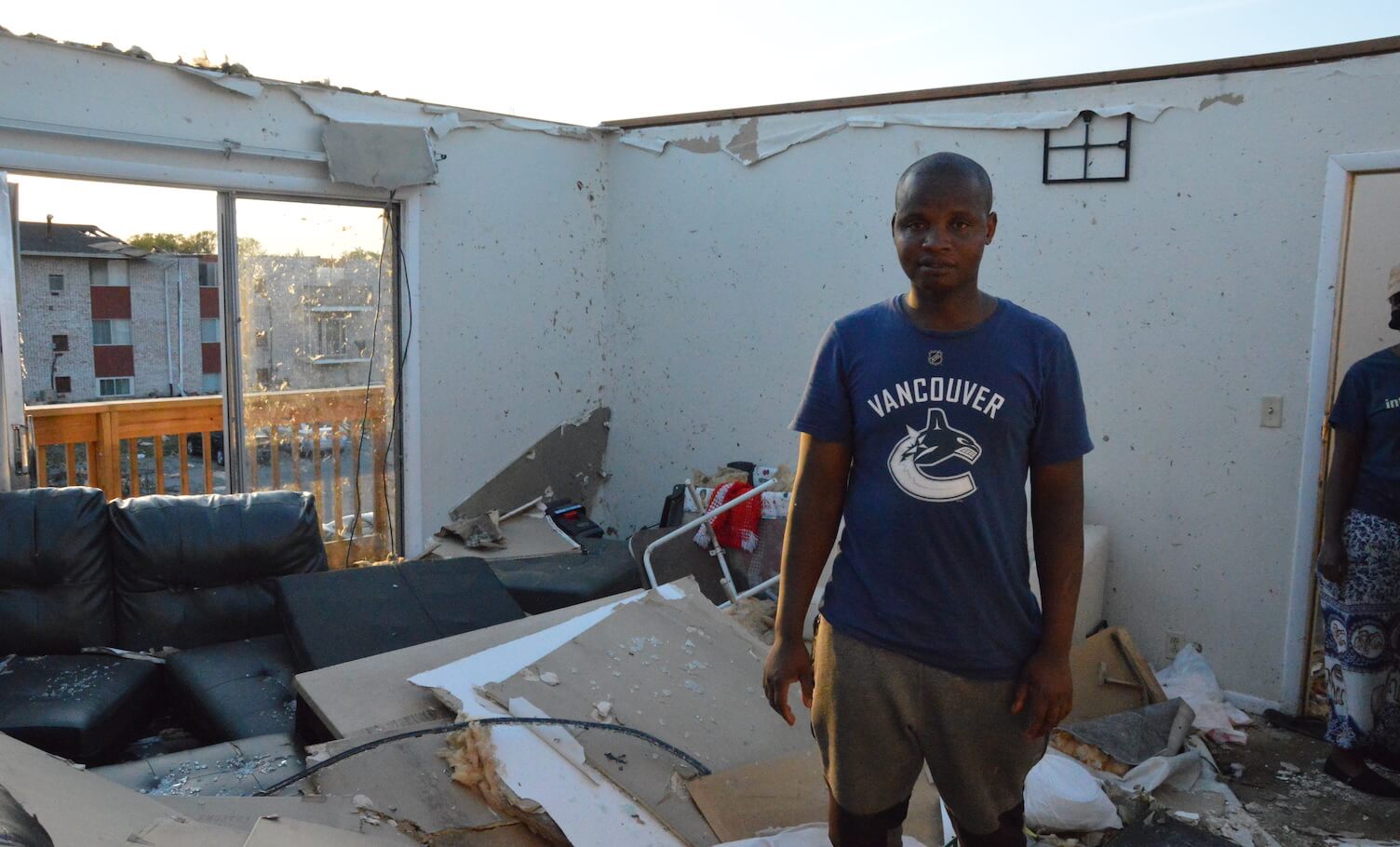 Outside the Cedar Terrace apartment complex, a small tent city had sprung up from residents whose homes were no longer inhabitable, five days after the storm. The complex sits in southwest Cedar Rapids and is home to 75 refugee families, mostly from East and Central Africa and Micronesian islands, many of whom had nowhere else to go. 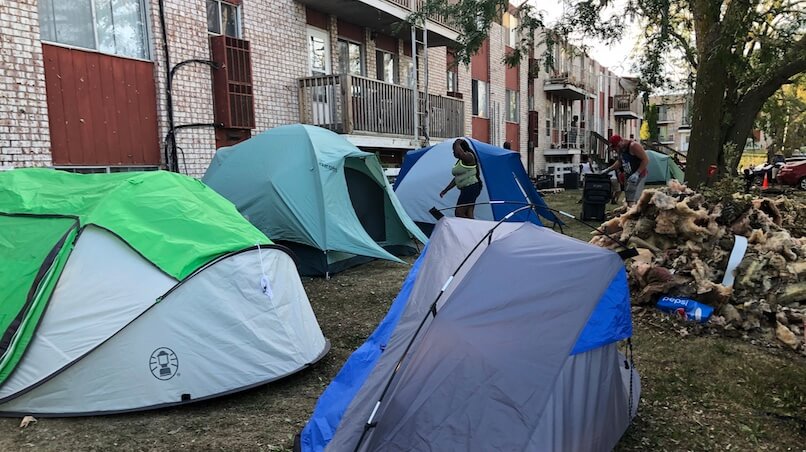 Vyamungu has a job at a warehouse in Iowa City, but has stayed at Cedar Terrace to watch over the many young children who play amid rubble, broken glass and scattered fiberglass insulation.

“I don’t want to break the rule of making a fire outside,” he said, gesturing to another group of refugees who had made a campfire on the grass to cook food. “I don’t want the kids to get in problems. I want to provide and make sure everything is good.”

Ndumiwana Vyamunga shows us his destroyed apartment in SW Cedar Rapids. His newborn son was 5 days old when the derecho hit on Monday. His two older sons had to go to the hospital and were just released. pic.twitter.com/rzdqcvNuHZ

The derecho, a little-known, fast-developing storm system, brought sustained wind speeds of over 100 miles an hour to much of central and eastern Iowa, causing damage across all 75 square miles of Cedar Rapids. It’s not immediately clear if the Cedar Terrace apartments got hit with particularly high wind gusts or simply took more damage due to it being poorly-built.

Richard Chigorogo, another Congolese refugee, has been hosting the Nduwimanas and six others at his home in downtown Cedar Rapids—save for a few damaged windows, his place is relatively intact. 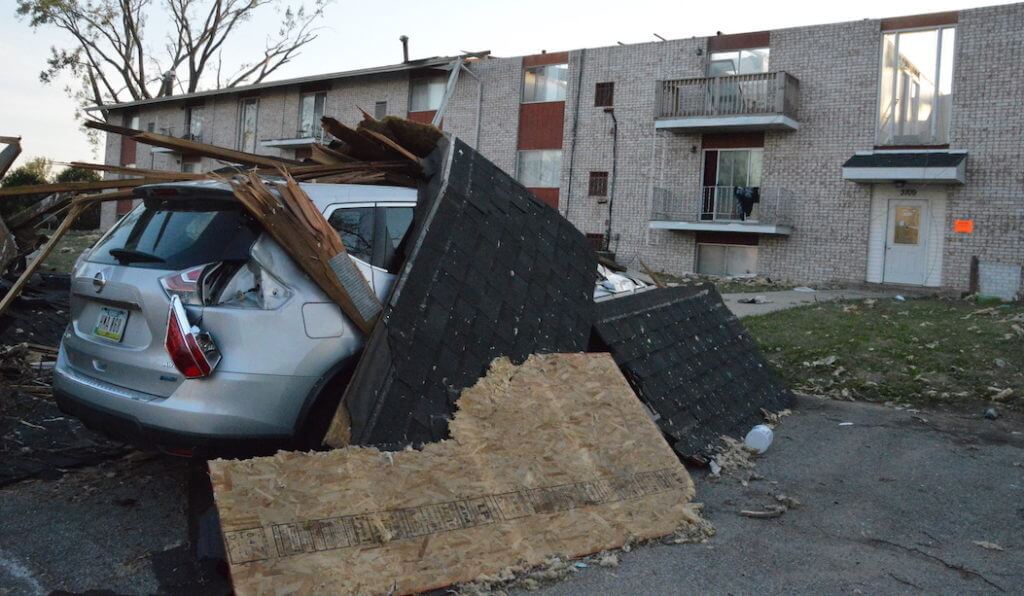 Opening his home to his now-homeless friends and buying food for the complex is not something Chigorogo can easily afford, however. After losing his job as a bus driver due to COVID-related cuts, the refugee joins a growing number who, after dealing with years of threats in their home countries, found shelter in Cedar Rapids only to be hit with the economic perils of the pandemic’s effect.

Now, just add a devastating inland hurricane to the mix—these newly-minted Iowans are left in nearly impossible positions to dig out of.

“The preexisting epidemic of poverty, the existing trauma from having to flee conflict and seeking refuge, the pandemic, now this hurricane,” said Lemi Tilahun, a supervisor of the Refugee Rise AmeriCorps Program. “The economic devastation from the  pandemic is something completely just—it put everything at a standstill. And now you add in this.”

Help, like that of Chigorogo, arrived for the complex on Saturday. More aid groups started to flow in over the weekend, along with tents and plans to move the residents to a safe shelter. But on Friday night, Cedar Terrace was quiet.

Wires jutted out of a group of Congolese refugees’ floor-level apartment unit—one of the majority of homes completely destroyed at the complex.

The group of about 12 laughed, drank Heineken and played checkers with children’s toys and containers of food sprawled around them. Most said they were staying with friends and family overnight but came back to cook and spend time outside their devastated homes during the days ensuing the derecho. Others slept in their cars or even outside. 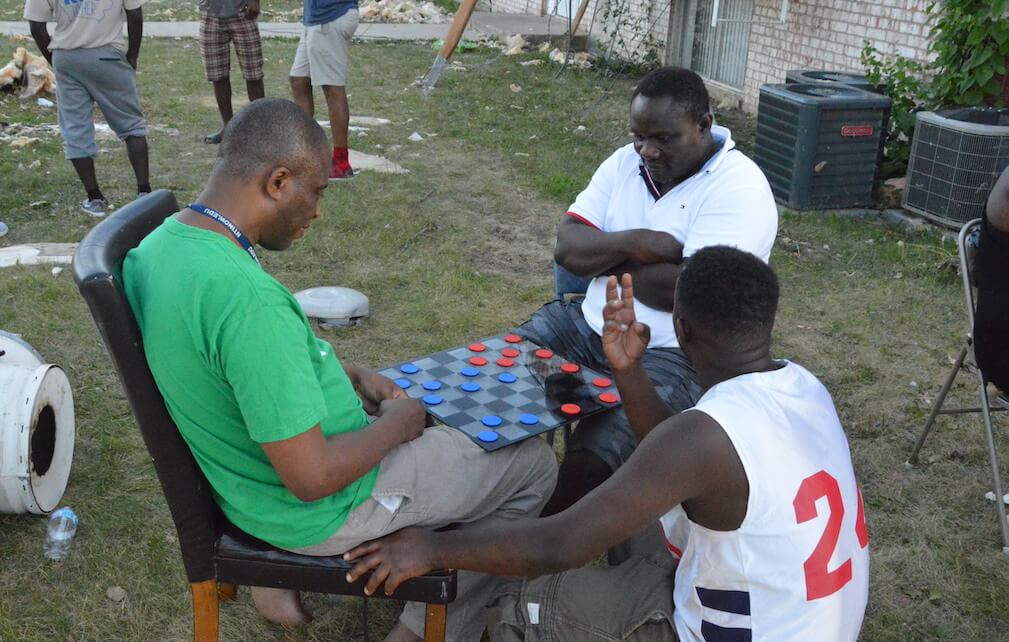 A woman who worked at Tama National Beef, one of Iowa’s packing plants that had an early, widespread outbreak of COVID-19, has not been back to work since the storm. Her family of seven is too large to all fit in a friend’s house, so they’ve stayed, sleeping in tents or cars.

“A lot of these people, if federal money isn’t declared, they’re never going to be able to recover,” Tilahun said, while expressing gratitude for the power outages throughout the complex because “the power could come back on and burn this place down.”

“Economic stability, upward mobility, depends so much on safe and accessible housing,” Tilahun added. “That never gets talked about. More often than not, it’s families and people from emerging populations, unrepresented, that suffer the most.” 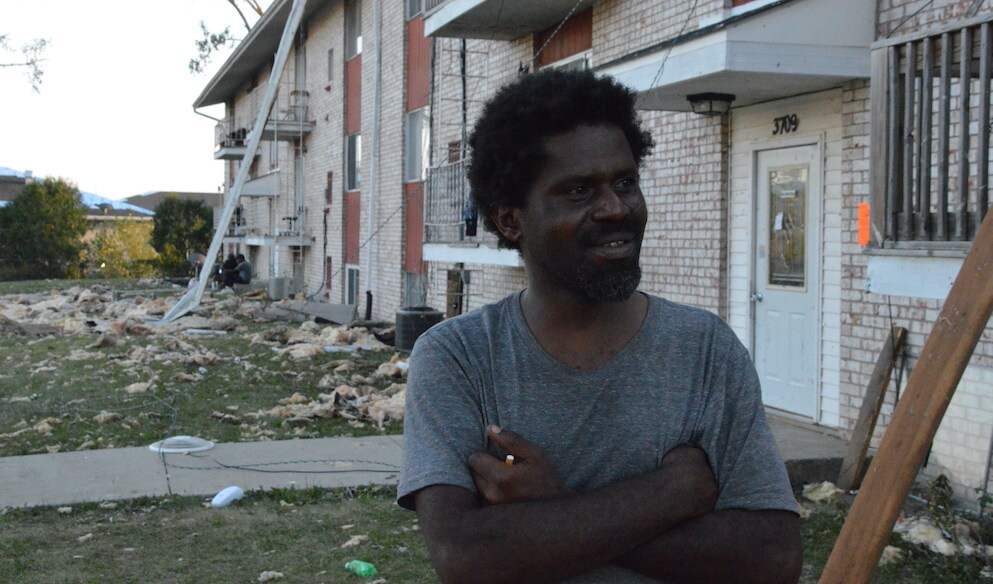 Pointing to his apartment which donned a bright “Do Not Enter” orange sign warning, Kidero took a break from playing checkers to describe his experience during the storm. He said trees began to fall and even injured his leg as he was outside when it raged.

Kidero’s home was just one of the 1,089 housing units the Cedar Rapids Fire Department decided was too damaged to occupy in an initial sweep of the city, the Cedar Rapids Gazette reported. And he said he had no idea what recovery would look like for him.

A Lack Of Swift Help

Tilahun and his team have been touring damage and helping distribute food and assistance since the storm hit a week ago. In fact, Tilahun was at the complex providing an informational session to refugee families about upcoming school protocol when the storm began—he said he then quickly sought shelter at Hoover Elementary School down the road.

Hoover itself educates the majority of the child refugees—a school comprised of 78% students of color and houses 26 different languages, according to Tilahun. Eighty-five percent of the school is also on reduced lunch.

“First and second generation survivors of genocide have come to this community,” Tilahun said, along with environmental or otherwise resettled refugees. 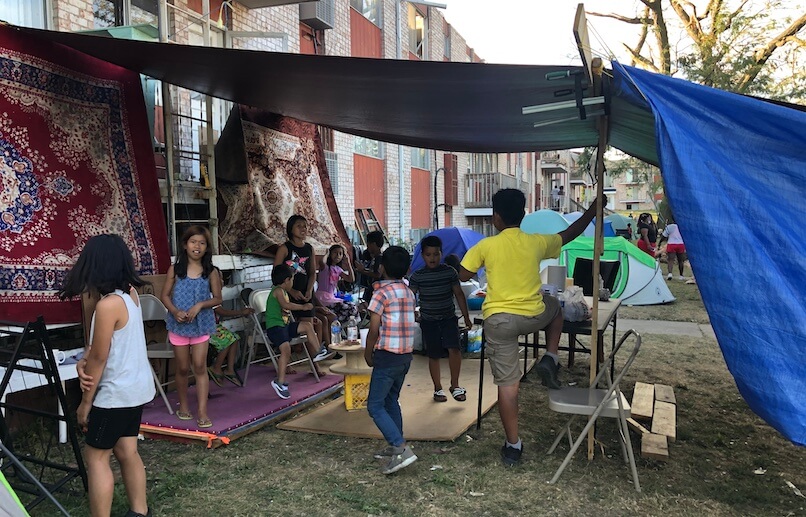 Immigrants accounted for 47.1 percent of total population growth in Cedar Rapids between 2012 and 2017, according to research from New American Economy. The report also highlights the impact that immigrants in Cedar Rapids have on their community, such as contributing $53.9 million to federal taxes and $26.1 million to state and local taxes.

But before Saturday, six days after the derecho devastated the complex, very few members of law enforcement or social organizations other than RISE had visited.

“We’re juggling relief effort vs. reaching out to public officials to ask for help,” Tilahun said, noting that the first state legislator he spoke with called him on Friday at about 2 a.m. “I shouldn’t have to take the initiative … they only saw police after two days.”

Down the street at southwest Cedar Rapids’ Westdale Apartments, Carine Jamanie, 16, and Prince Kapila, 30, sat in 90 degree heat on folding chairs with friends and family underneath a lone standing tree. Up in their apartment, a corner unit, you could see a white refrigerator and what was left of their kitchen cabinets surrounded by no walls. A tan, suede couch sat covered in pieces of white insulation. It looked like it may have fallen from what was left of their second-story family room.

Kapila asked, through the translation of Jamanie, why no one had been there yet.

“The storm happened six days ago,” he said on Saturday. “We sleep outside. We tried to call police and police said to call Red Cross. We called them and they did nothing. Red Cross said they can’t help people with shelter because there is COVID.” 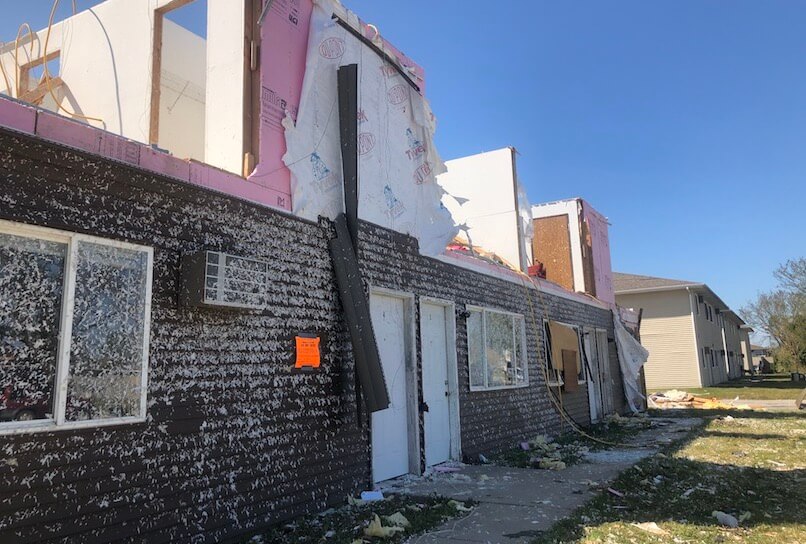 Other residents said their property managers told them to go to a hotel or shelters. But unsure of how to pay, linguistic barriers to access and transportation struggles make those options impossible.

And placing these refugees in shelters is also difficult, because many require each person’s date of birth, address and the correct spelling of their names, which is difficult to extricate because of linguistic barriers.

“We need help,” said Kapila, who had also recently lost his job at Whirpool because of COVID-related cuts.

A shelter was eventually set up by the Catherine McAuley Center.

Another Round Of Homelessness

For most refugees at low-income apartment complexes, homelessness or resettlement isn’t a novel experience.

“One of the people we were talking to today said, ‘we’ve gone through much worse.’ Some families say this is the first time they’ve ever had a home where they didn’t have to be in hiding. They don’t want to leave this place,” said Tilahun.

This is especially true for Cedar Terrace’s Micronesian community, who built a camp with the rubble from their crushed homes in the days after the storm. They grilled food using fire kindled with fallen branches and hung decorative rugs like tapestries while they sat and talked.

When more help came on Saturday, they received some tents and planned on staying there despite the arrival of the Cedar Rapids Fire Department who said tenants had to leave the premises because of safety concerns.

“We’re homeless,” said Jane Thomas, a Micronesian environmental refugee cradling a newborn child in her arms in front of their makeshift dwelling.

Some have simply given up, and plan on moving out of Iowa. The coronavirus already took some of their jobs, and the derecho wiped out all of their possessions. Several of those who lost their homes told Starting Line they planned on moving to other states like Tennessee or Arizona.

Thomas said she wasn’t planning on returning to her job because of the derecho—she needed to help her community by watching the children who were now dancing and giggling as if everything was one big slumber party. And she didn’t know how long they’d need her help.

If you’re interested in helping Iowa refugee organizations, you can visit EMBARC Iowa (Ethnic Minorities of Burma Advocacy and Resource).