Guest op-ed from Porter McNeil, a longtime Democratic consultant from the Quad Cities

In 2016, roughly 80,000 votes across the upper Midwest proved to be the margin of despair for Democrats as they watched a Hillary Clinton popular-vote win “trumped” by the Electoral College.

David Axelrod and David Plouffe, in a May 4 piece for the New York Times, stress the need to “embrace a suite of virtual, data-driven tools and creative tactics …”

The infamous 1992 Clinton-Gore Bus Tour that travelled through the heartland may be a creative tactic worth emulating in 2020. Team Biden might consider a virtual bus tour that combines the old and new digital politics to visit the precincts of social media in the heartland.

We know Team Trump is saturating the rural social media precincts on Facebook — a tactic even more important as community newspapers fold their tents.

Campaigns, good ones, work hard to create free media and grassroots momentum. That bus tour also says something about the changes in the national Democratic Party — away from a focus on the small towns in the heartland in favor of big cities.

Choosing the bus tour was the result of an internal Clinton Campaign debate. Nearly 30 years later, that debate still rages within the Democratic Party.

On one side were those who pushed a traditional bus tour that would have taken the candidates to only large cities for big crowds in their urban political base. On the other side were advocates for taking the bus into more purple turf — smaller towns and town squares in swing states. The latter, led by then Clinton Campaign Manager David Wilhelm, won the argument.

Cathleen Decker, then a reporter for the Los Angeles Times, covered the six-day, eight-state bus tour in 1992 that generated an avalanche of free media. She called it a “ … remarkable journey that delivered the Democratic presidential ticket into the town squares and front yards of an America usually forgotten in the hustle of modern political campaigning,” 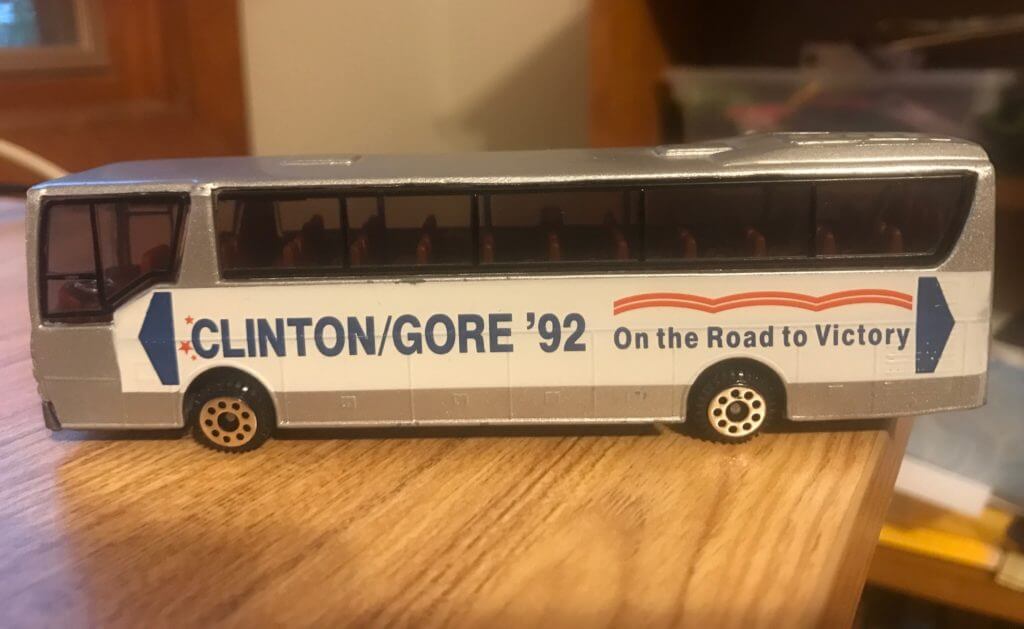 The 2020 bus should include Iowa in its list of Midwestern states, since Democrats have won three out of five presidential contests there. Including the Obama-Trump counties that border the Mississippi River would be a smart place to start. Former Gov. Tom Vilsack knows the value of showing up everywhere in Iowa. During his 1998 gubernatorial campaign, he rode a bus to winning 48 of 99 counties, smashing the Republican Party’s 30-year hold on the governor’s office.

Iowa, with its 31 pivot counties (counties that went for Barack Obama twice and then Donald Trump), is ripe for such a bus tour. With 25 pivot counties in the eastern half of the state, the bus needs to head east.

Joe Biden, who led the Obama-Biden Middle Class Task Force, is a natural ambassador to blue-collar Midwestern voters. The key to a real — or virtual — Biden Bus Tour may be the key to the White House.

By Porter McNeil, a longtime Democratic consultant from the Quad Cities
Posted 5/28/20