The Institute for Health Metrics Evaluation from the University of Washington is now predicting Iowa will experience 1,513 total deaths from COVID-19. The peak in daily deaths is now not coming until between June 8 and 10, with the model predicting 21 average deaths a day during that three-day peak. It believes the total deaths will accumulate through August 4 at least.

Today, Iowa experienced its highest one-day death total yet, with 19 more Iowans passing away due to the virus. The state also surpassed 200 deaths and 10,000 positive cases, with 207 total deaths and 10,111 confirmed cases overall.

You can compare what the models for Iowa looked like during different times. Here’s the Iowa death estimates as of today, May 5: 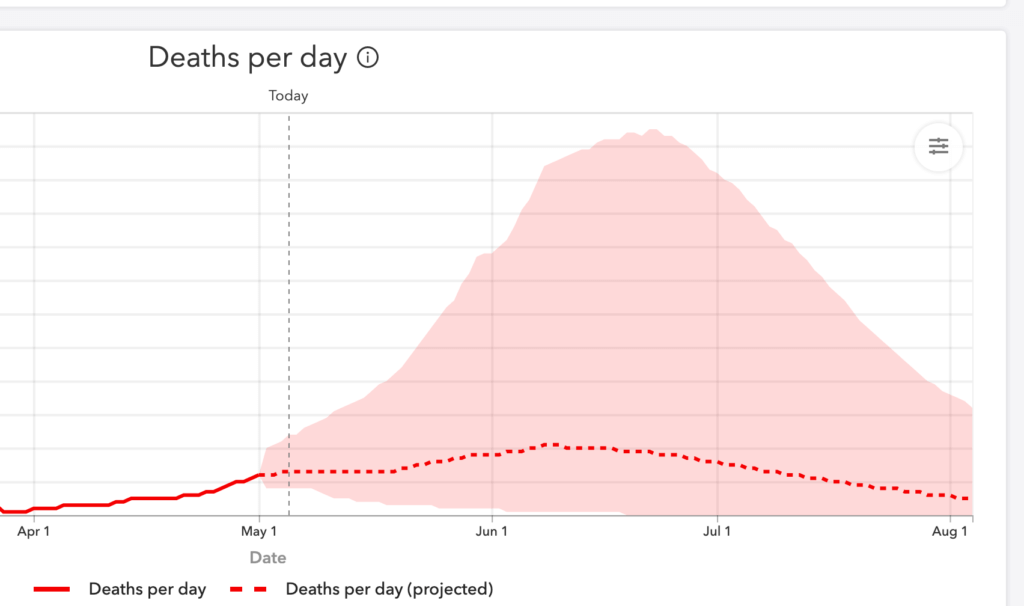 And here’s what it looked like back on April 21:

In early April, after the IHME model finally and correctly accounted for the state’s school closures, the initially dire projection of 1,500 deaths was reduced to just 420. At that point, the peak in deaths was thought to be April 26, with the worst deaths per day being 15.

The model moved a couple times after that, predicting 743 deaths by June 7 (when it expected the initial wave to come to an end) and 565 deaths by June 3.

On April 17, the model was predicting the peak would hit on May 8. By April 21, the model moved the peak up to May 7.

Throughout the month of April, Reynolds and state health leaders often predicted the state’s peak was just two to three weeks away. They said that at the beginning of April, as well as last week.

Despite knowing the peak of cases and deaths in Iowa had not hit yet, Reynolds went forward with her plan to pull back restrictions on 77 counties, saying that Iowans “must learn to live with” the coronavirus.

The IHME cited “rising mobility in most U.S. states as well as the easing of social distancing measures expected in 31 states by May 11” as the reason for their increases, which now predict about 135,000 deaths nationwide. Also in mid-April, the model predicted 61,545 total U.S. deaths by August 4. The country has already recorded 69,680 deaths as of today.

Before the IHME updated its national and state projections, it was already reported this week that the Trump Administration was internally predicting a far higher death toll in another model forecast. The daily death toll will be around 3,000 by June 1, it predicted.