Despite nearly half of Iowa’s new coronavirus cases coming from the Southeast Iowa region over the past week, the state’s metric system for determining shelter-in-place now shows it in better shape than before.

Region 5, which covers most of Southeast Iowa, Johnson County, Scott County and up through Jackson County, is now rated an eight, down from its previous nine, because the percentage of hospitalization has decreased.

In order to trigger a shelter-in-place order under Iowa’s system, a region has to hit a 10 ranking, which is established from four factors: hospitalization, percent of population older than 65, rate of positive cases per 100,000 population in the past 14 days and outbreaks at longterm care facilities. However, Reynolds has recently noted that the state will take many things into account when deciding next mitigation steps.

As Starting Line previously reported, the hospitalization metric could actually decrease with more widespread testing, regardless of whether that meant the virus was more or less severe. Today, Iowa has tested 18,696 people, according to Reynolds. 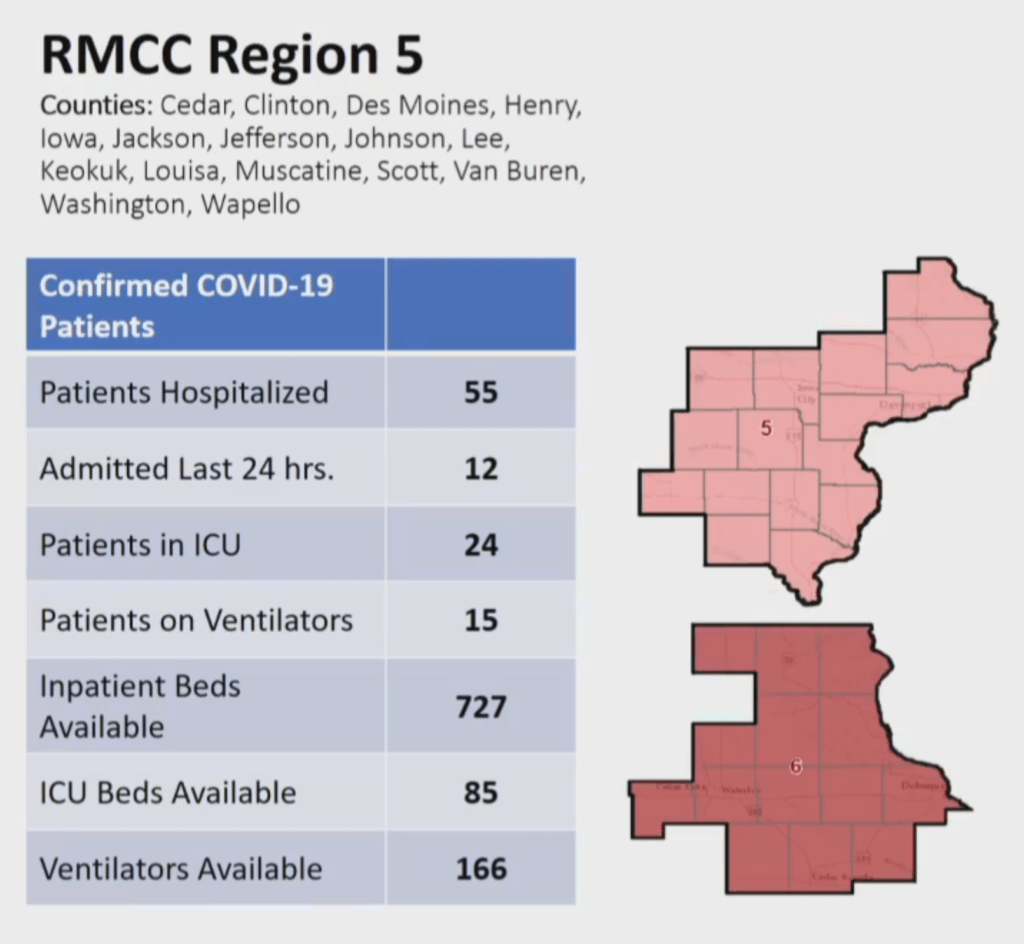 In Region 5, there are now 55 people hospitalized. Twelve were admitted in the last 24 hours and 24 patients are in the intensive care unit. Many ICU and inpatient beds remain available.

Sarah Reisetter, the deputy director of the Iowa Department of Public Health, said that change in hospitalization is the reason for the downgrading in rating.

“What’s happened in Region 5, is that as we’ve continued to see case counts increase, the severity of the illness has also decreased,” Reisetter said in this morning’s press conference.

Johnson County had the biggest one-week increase here with 92 cases, bringing its total to 210. Louisa County was just behind with a 72-case increase. It now has 79 total cases after over two dozen employees at a local meat packing plant were infected, and in one week the county went from just one case to the highest per capita case ratio in the entire state.

As it stands, regions ranking between four and nine only require mitigation strategies like social distancing. Currently, every region in Iowa is below that.

Today, Reynolds gave the metrics for each region:

You can see how those numbers have changed from this map put out on April 6:

Reisetter and Reynolds confirmed that Iowa’s peak in coronavirus cases is still projected for late April.

“All Iowans must continue to do our part to protect our health and the health of others during this critical time,” Reynolds said.