A well-known conservative pastor with a large following in Iowa has spent the past weeks railing at Gov. Kim Reynolds’ order to halt large gatherings at places of worship, while making frequent Facebook posts questioning the severity of the pandemic.

Pastor Cary Gordon, the senior pastor of Cornerstone World Outreach church in Sioux City, has derided the shutdown order as  an”egregious abuse” of power, said the government was “grossly overreacting” and the entire reaction to COVID-19 was “stupid” and “mass hysteria.” A Simpson College professor noticed the social media messages from Gordon earlier this week, which also included a number of racist posts and jokes aimed at Chinese people.

Many times in the past few weeks, Gordon has shared messages or stories that looked to downplay how serious the coronavirus’ spread was in Iowa. On March 23, he shared a quote of how Iowa’s numbers weren’t doubling like Italy and New York. Four days later, Iowa’s cases had doubled; five days later, they’d tripled. 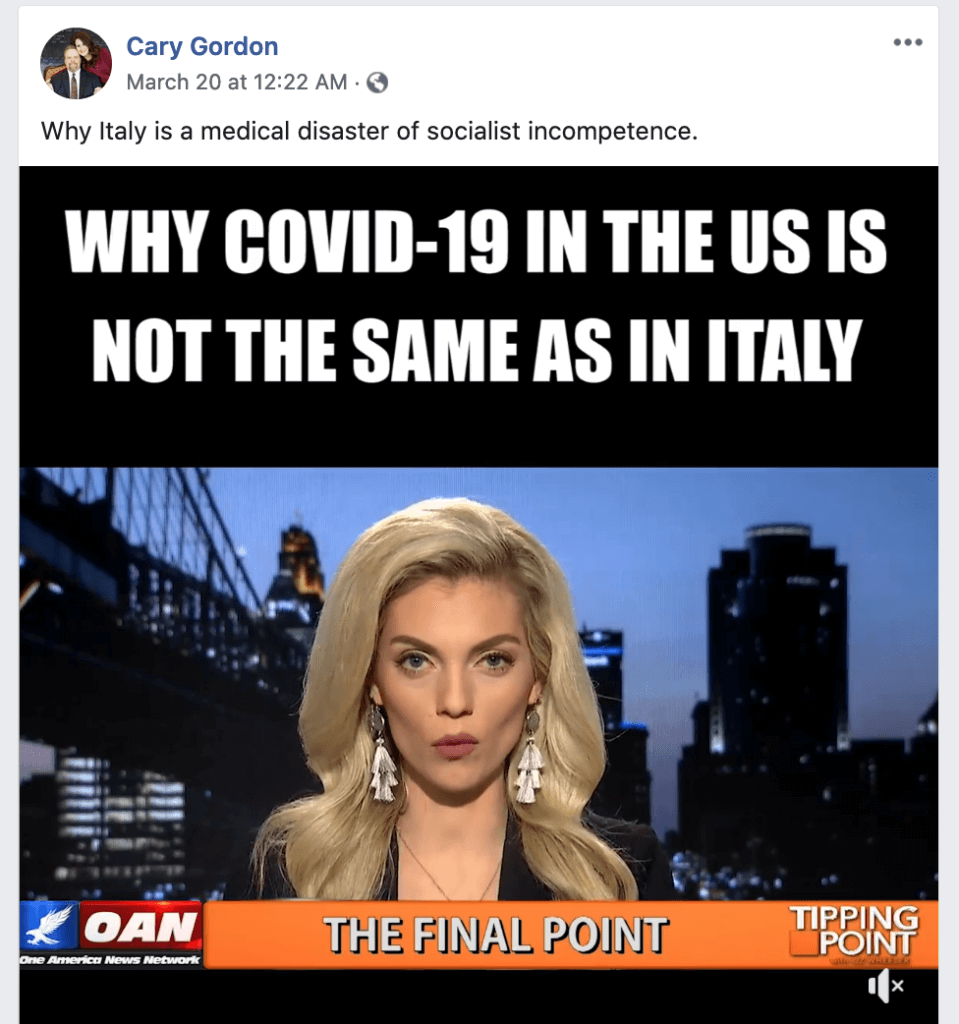 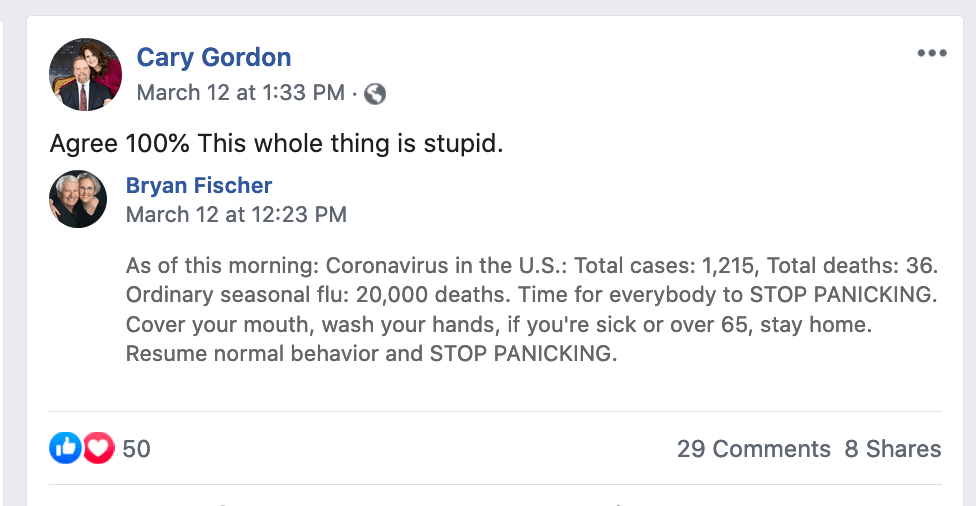 On March 24, still early on in virus’ spread in Iowa, Gordon complained that Iowa was “grossly overreacting” considering he had heard of only seven hospitalizations in the state from the virus. Later that same day, Reynolds would announce that 18 Iowans had been hospitalized, a number that has since jumped considerably. It’s also a trend that’s been clearly seen in other countries and states where the virus spread to in the weeks and months before it came to Iowa. 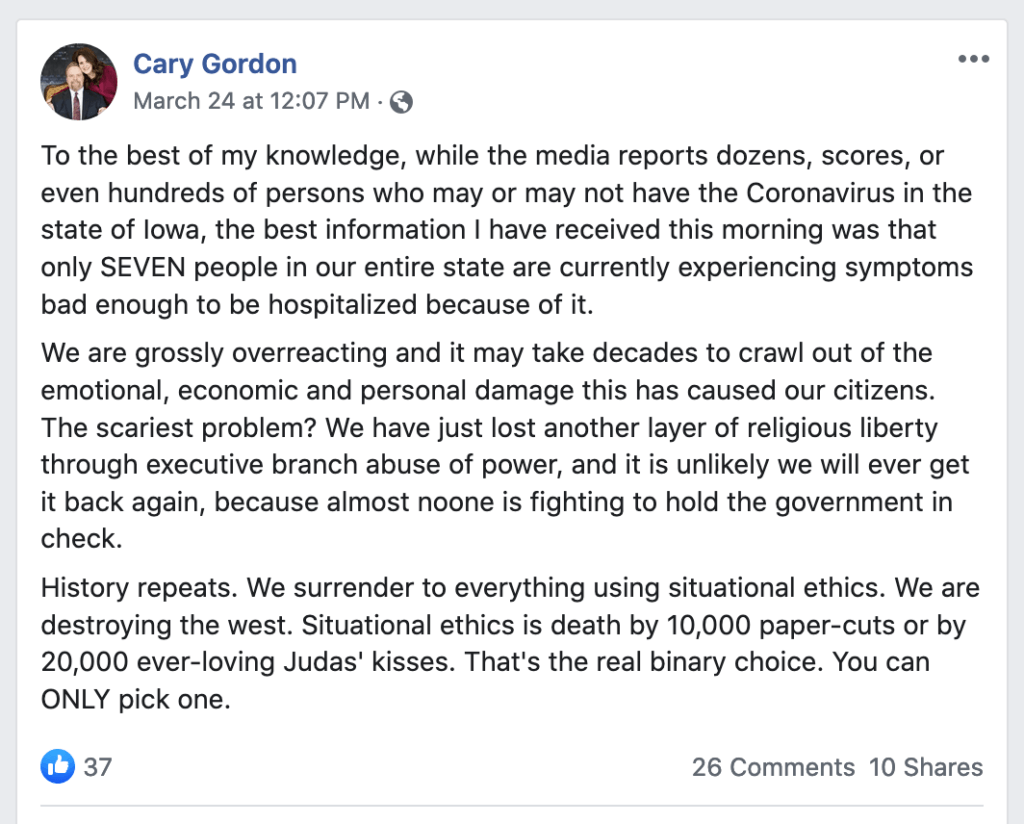 Gordon’s skepticism of the severity of the outbreak mirrored many far-right outlets, like the OAN outlet he shared one story from, as well as President Donald Trump’s early statements on the coronavirus.

Also like some of Trump’s allies, Gordon took pleasure in calling it the “Kung Flu” virus to further “otherize” the pandemic. Early on in March, he said the virus was “allegedly created by gross Chinese people who decided to add whole bats to their egg-drop soup.” He also called those Chinese “culturally backwards” with a “culinary retardation.” For good measure, Gordon also theorized that the Chinese government, which locked down an entire province, may have intentionally helped spread the virus to its people, because of communism. 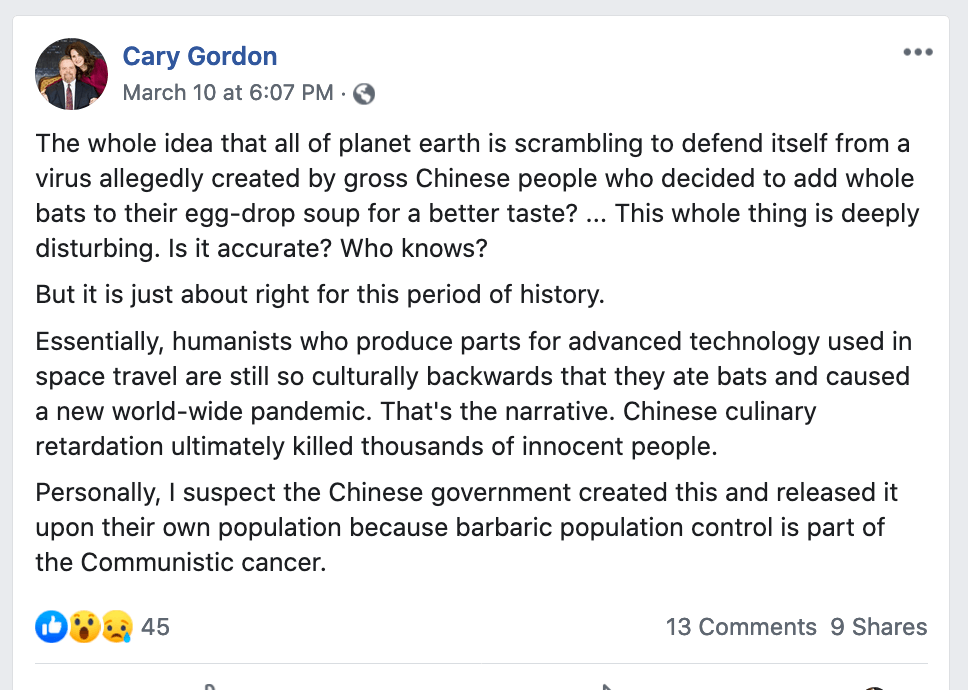 Gordon, however, has not fully dismissed the dangers of COVID-19 like some other right-wing personalities. He has repeatedly urged older members of his church and those with underlying health issues to consider staying home. 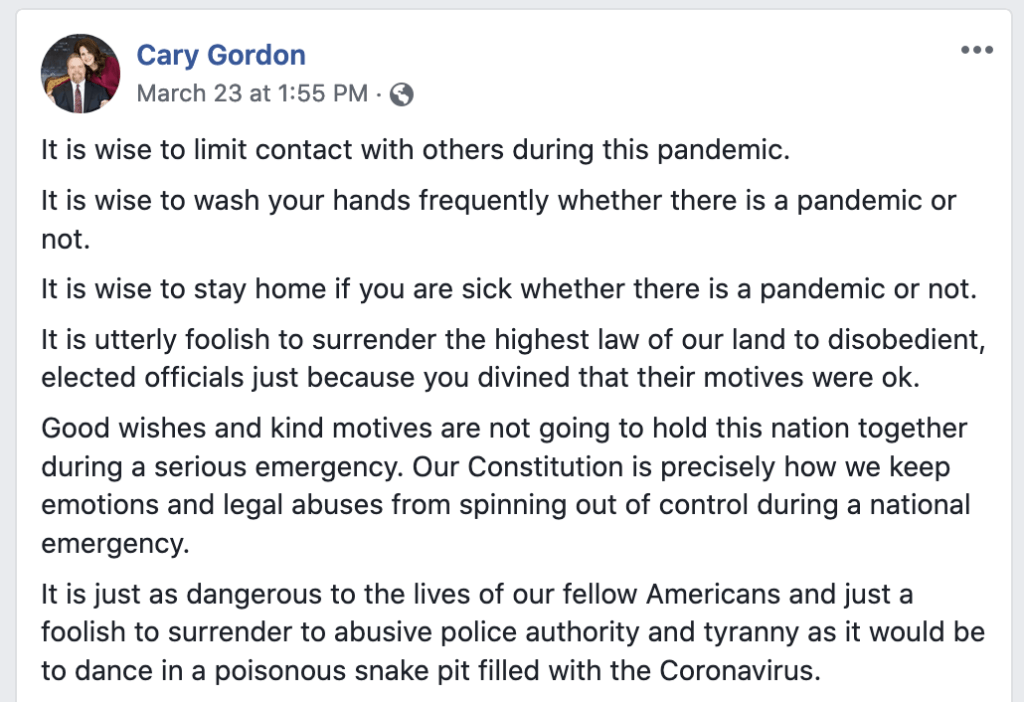 However, given the tone of his many other posts seen by his congregation on social media, it’s questionable which message is being heard louder by his followers — that you should be cautious or that it’s an overblown media spectacle with limited consequences in Iowa.

In an interview with conservative radio host Steve Deace on March 24, Gordon noted that they had added stainless steel brackets to bathroom doors so people wouldn’t have to touch the door handles and added many hand sanitizer stations. Gordon said his church was now “wiser and cleaner than any of the local hospitals that I live” and comparable to a NICU.

But what has angered Gordon the most is the directive from Reynolds, who he refers to as the “Governess,” that gatherings of ten people or more are banned in the state, including at places of worship. In a call to the Governor’s office, Gordon complained that it was an “egregious abuse” of power.

“Now you’ve put me in a precarious position of having to become a civil disobedient person as a pastor in our community when people are scared and they need the church, and I’m being told I might be arrested if I go ahead and hold services according to the 1st Amendment of the Constitution,” Gordon warned.

Gordon argued it should have been optional instead of mandatory, in which case it seems likely he would have still held service. This past weekend, Cornerstone held a service, albeit in the parking lot with audio delivered over the radio. Though the photos show a full parking lot, it appears the worshipers stayed in their cars. 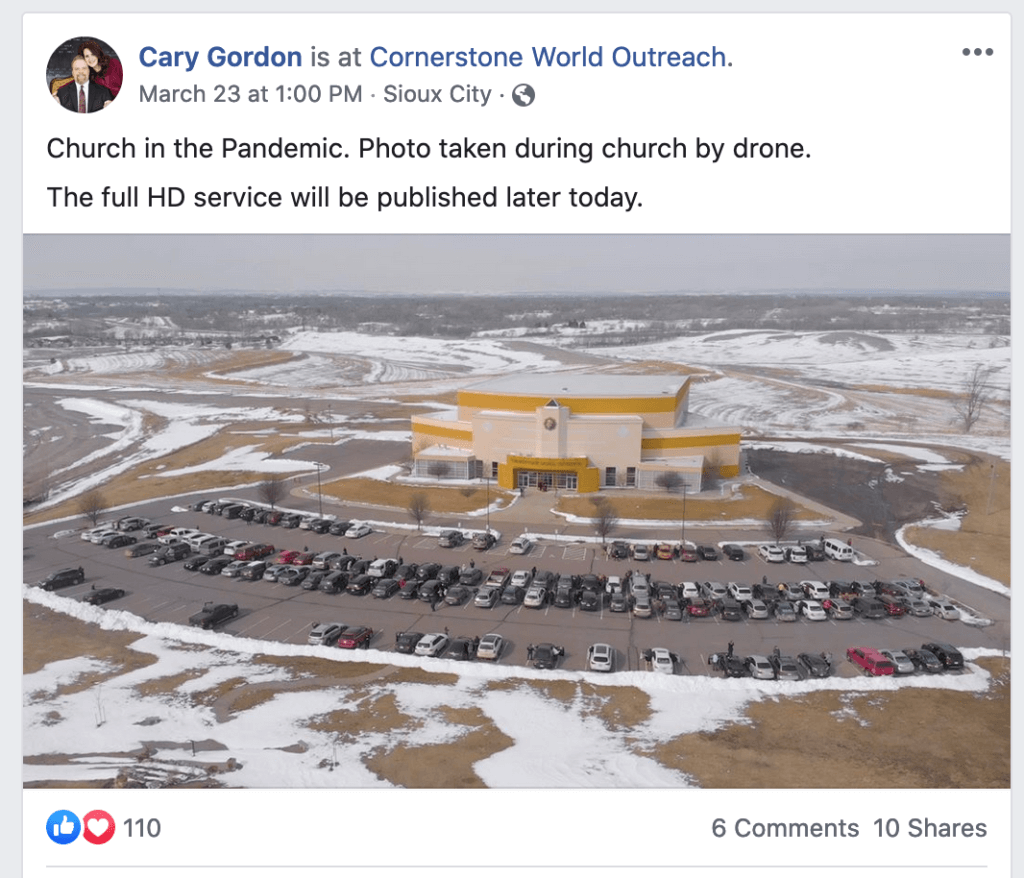 Last evening, Gordon argued that many state governments’ actions in closing church services was “more dangerous and frightening than a deadly virus.”

In other interviews, he does bring up important points about the difficulties that closing churches present to the faithful, from being less able to comfort people in a time of crisis, to being unable to baptize people online and noting, “You can’t bury the dead through a video screen.” He’s also concerned about the First Amendment precedents.

But interspersed in all of that is more attempts to downplay the severity of the current crisis.

In a March 26 interview, Gordon said, “there are lots of medical experts that say we’re grossly overreacting,” and referenced an English study that supposedly said, “banning mass gatherings of worshipers on Sundays would do virtually nothing to stop the spread of the disease,” contrary to the CDC and nearly every other country’s medical professionals.

And like other right-wing commentators, he’s accepted a certain amount of fatalism.

“I think you could make the medical argument that every single public gathering, you’re taking some reasonable risk of some communicable disease will come into the auditorium and someone will die,” Gordon said. “Shall we just close church and build a bunker? At some point, men have to be self-governed and do it within the constraints of the Constitution.”

Gordon is well-known in Iowa politics for his conservative views and opposition to marriage equality. This situation, however, has him planning to leave the Republican Party.