The deadly, global pandemic that has already sickened two of his constituents is a source of big laughs to Rep. Steve King.

While King has had little to say in Congress about the coronavirus’ spread, his official political Facebook account has been a nonstop stream of memes about the virus since the crisis started to dominate the news.

Just hours after King walked off the House floor where he was one of 40 Republicans to vote against the major coronavirus relief package, his Facebook page shared a meme about the virus and Jeffrey Epstein’s suicide. 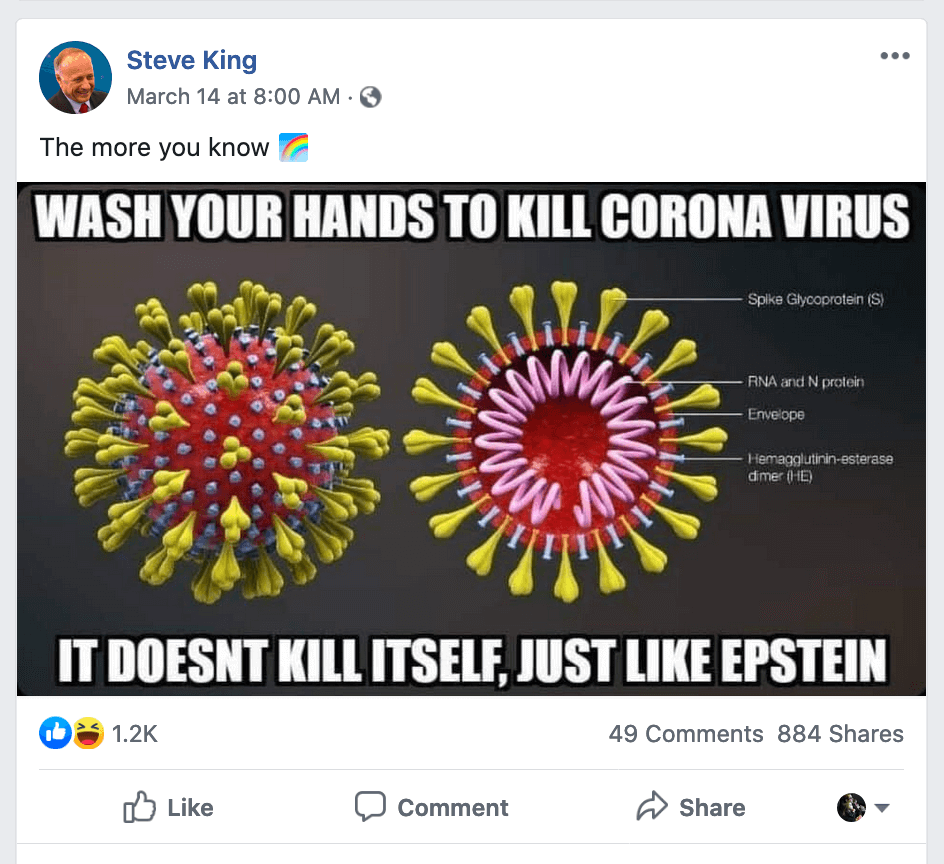 At least that one had a modicum of good advice wrapped into a joke. The rest of his posts on the matter have been completely devoid of logic or good sense.

Later that Saturday, King’s page shared yet another racist meme involving Elizabeth Warren, this one incorporating the shortage of toilet paper due to hoarding around the crisis. 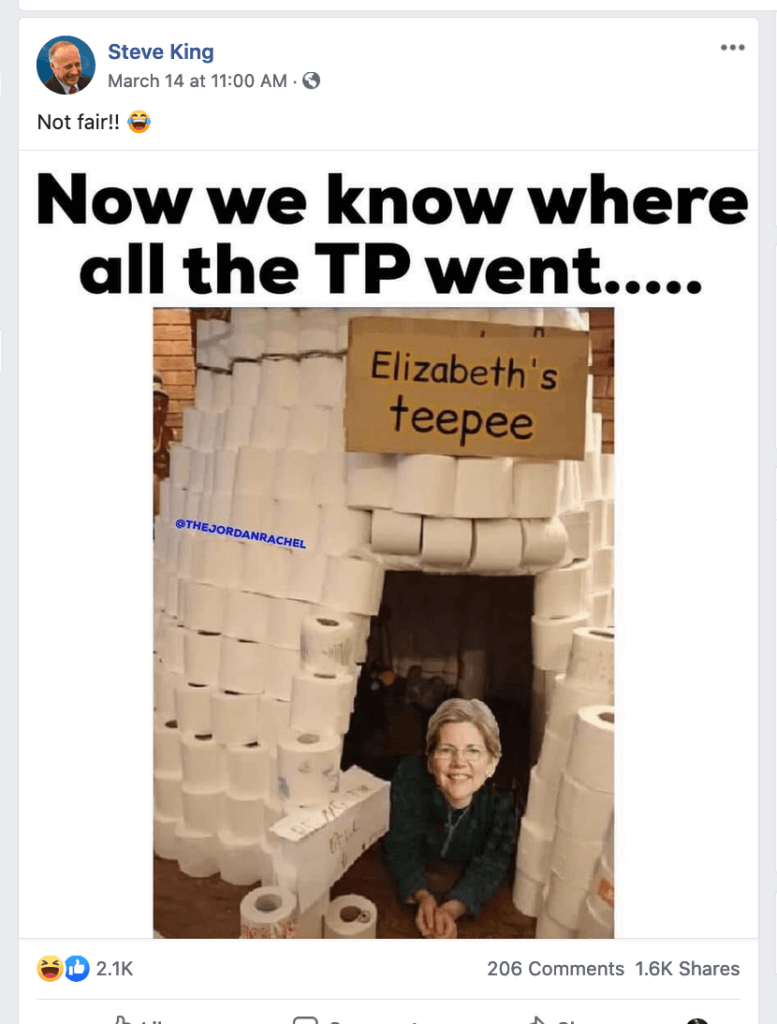 It’s suspected that one of King’s family members runs his Facebook page, not the congressman himself, though he has been questioned about the memes it shares before and nothing has changed. 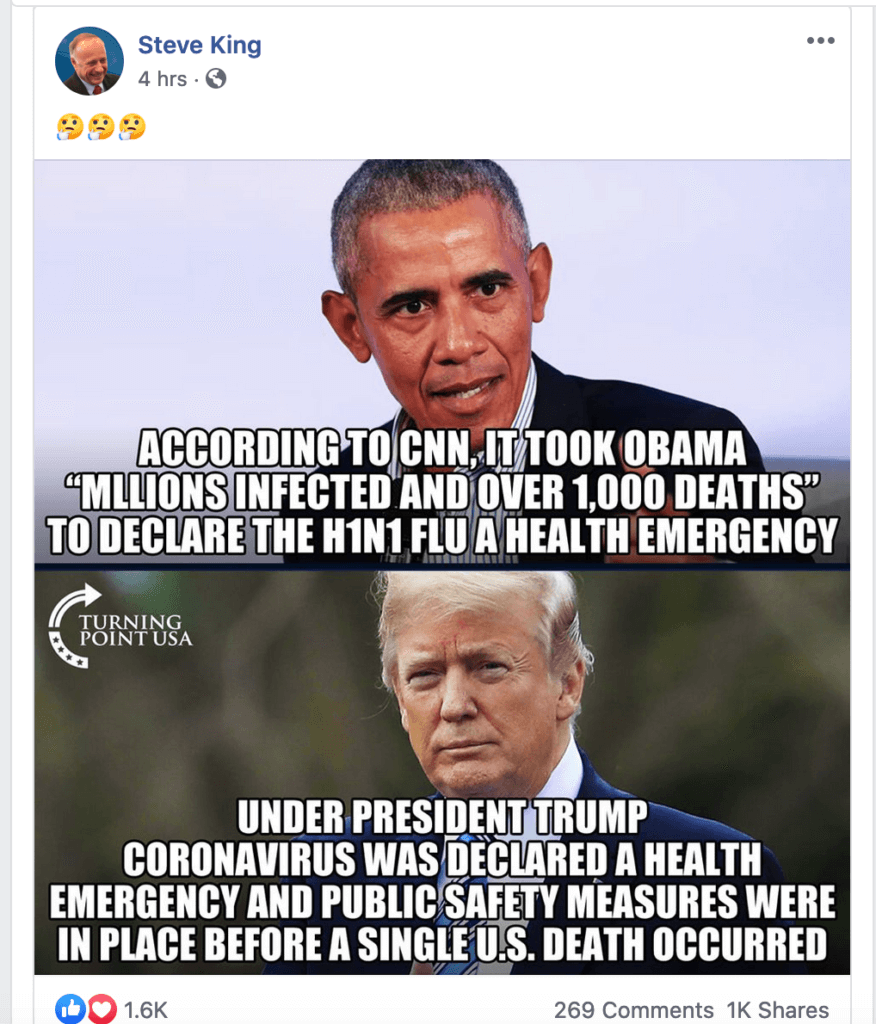 One would think King might show some more concern considering two of Iowa’s confirmed cases of COVID-19 has occurred in his district.

Instead, the morning after the first positive case of coronavirus in the 4th District was announced in Carroll County, from a resident who had returned from an Egyptian cruise, King’s Facebook page mocked Bernie Sanders and store shortages on essential supplies. 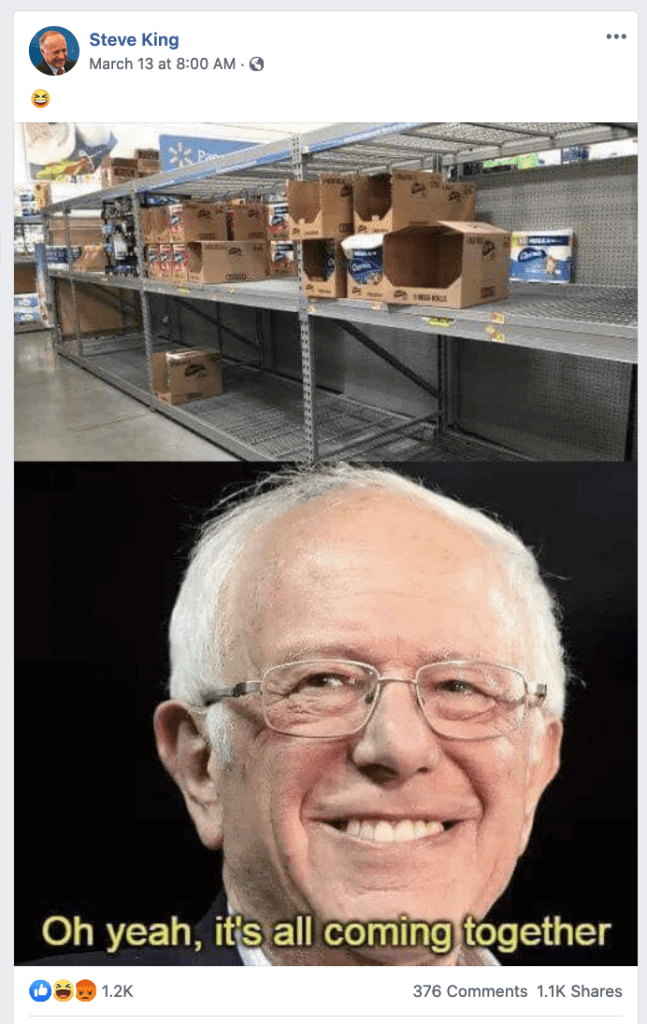 Keeping with his theme of Democrats for that day, he also had some jokes about Hillary Clinton. This one was posted around the time Gov. Kim Reynolds was announcing the second case of coronavirus in King’s district, this one in Harrison County. 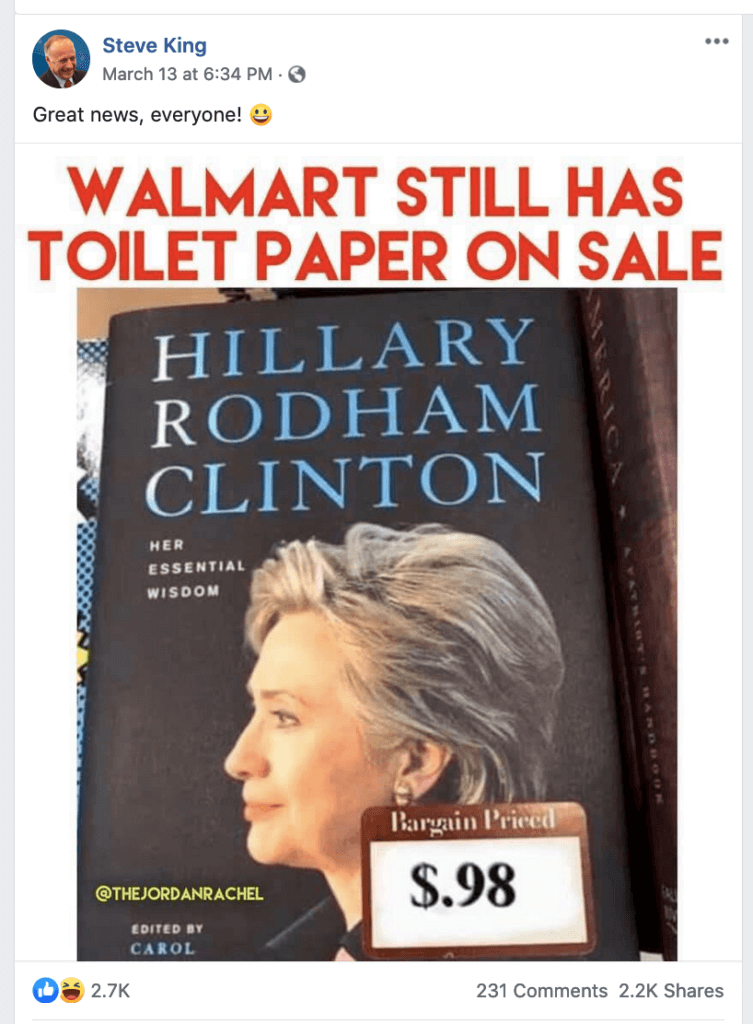 While other Republicans, including those in Iowa, have bristled at any words from Democrats that could be construed as politicizing the ongoing pandemic, King has happily used it as a cudgel to hit Democratic politicians and the left, usually on unrelated matters. 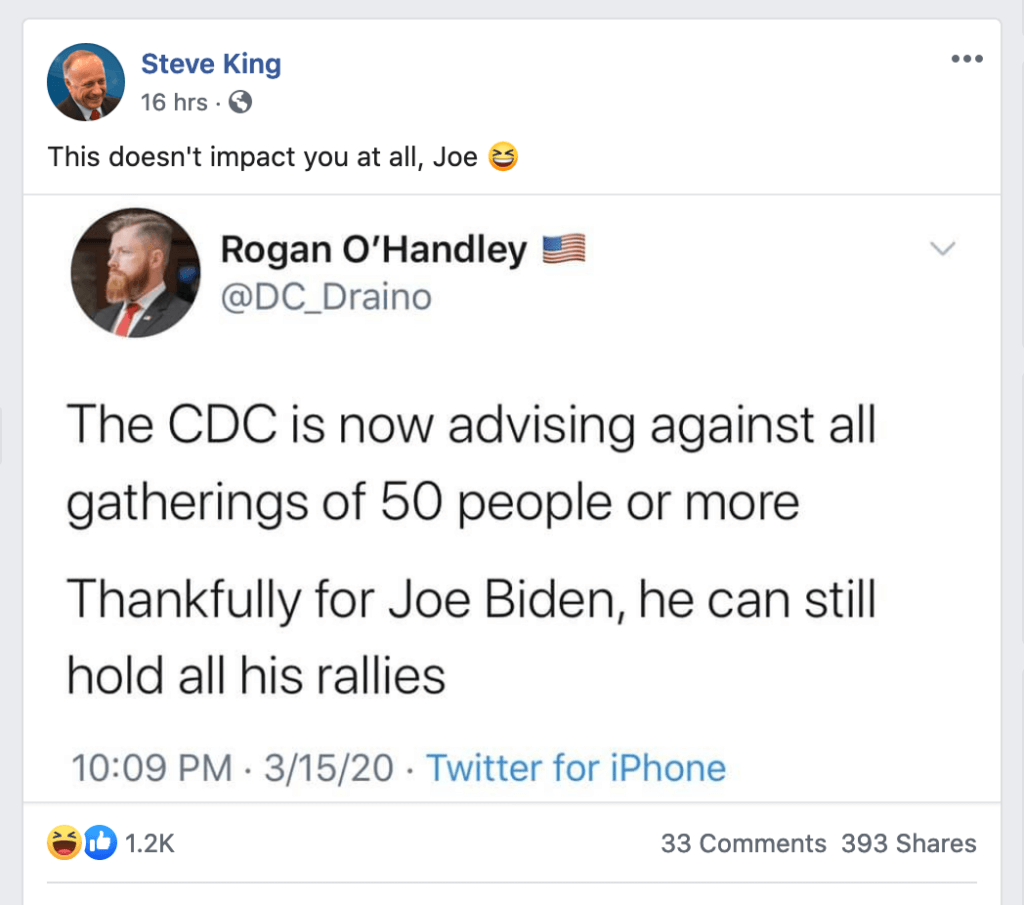 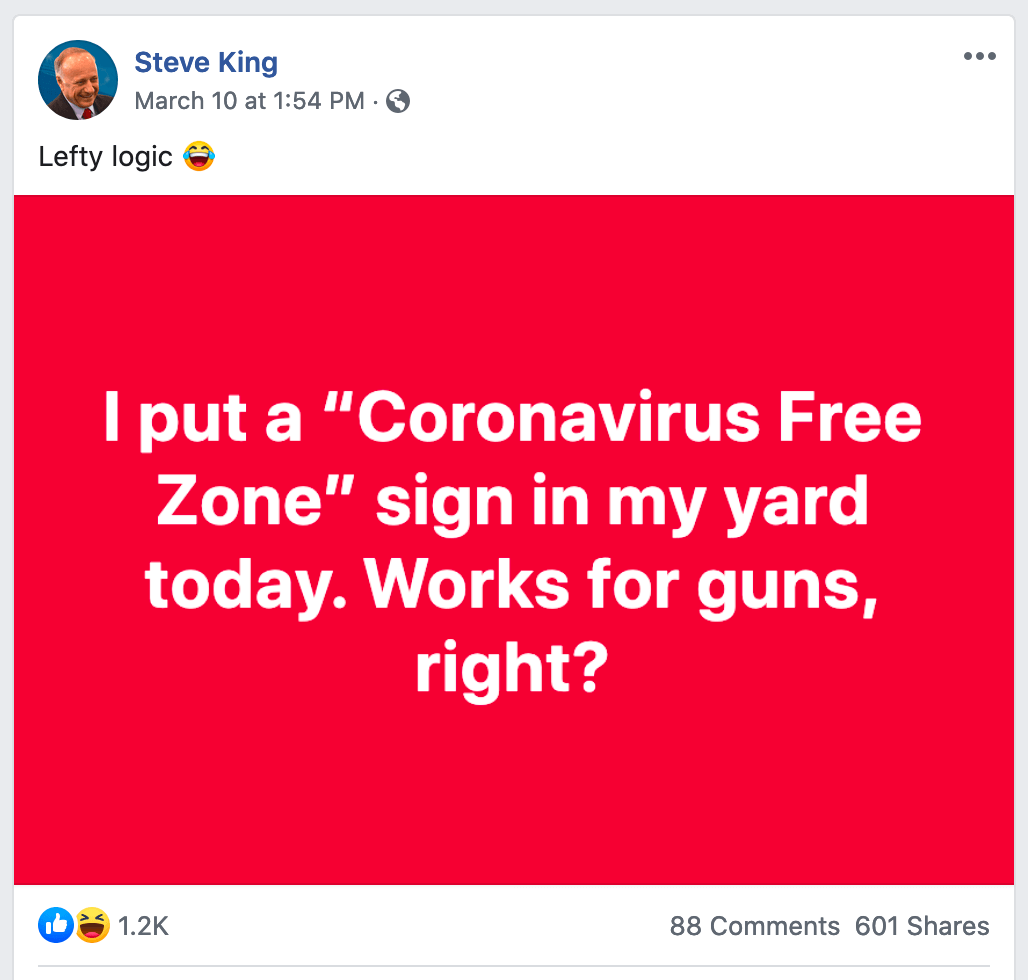 Fortunately for King or his staff, they did still find time to push one of King’s new personal conspiracy theories about a former government official who died recently. 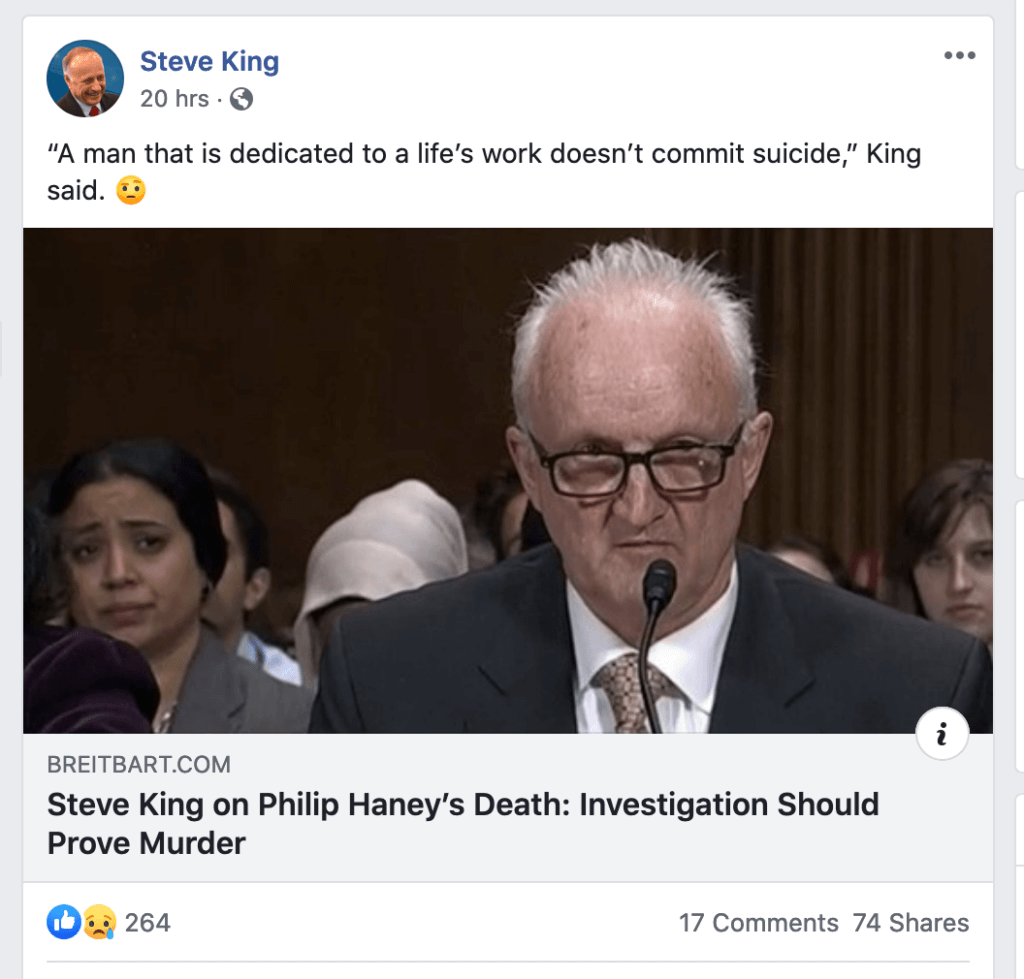 King has, however, decided to reschedule two town halls that were planned for Thursday.

Perhaps we can look forward to even more childish memes from one of Iowa’s members of Congress if he and his staff actually takes government advice and stays at home for the next few weeks. It won’t be too much of a change for King’s workload, considering he continues to not sit on a single committee in the House.

5 Comments on "After Voting Against Relief, King Memes The Coronavirus Crisis"