Theresa Greenfield marched up to the Iowa Statehouse this morning, flanked by dozens of labor union members carrying boxes that contained over 20,000 signatures to put her on the ballot for the June primary. It was the most names of any of her Democratic competitors who also hope to take on Sen. Joni Ernst for the Senate seat this fall.

Since Greenfield launched her campaign last June, she has amassed those signatures in support of her candidacy in all 99 counties. Candidates are required to submit at least 3,200 valid signatures to be eligible for the June 2 primary ballot.

Greenfield hand-delivered her nominating papers Wednesday morning at the Secretary of State’s office. Two years ago, this was the place of disappointment and failure for Greenfield’s previous campaign for the U.S. House in 2018, when her campaign manager’s forgery of signatures kept her off the ballot and put him in serious legal jeopardy. She quickly fired the staffer, and a last-minute effort to gather all new petition names came just short.

Today was much different, however, as Greenfield projected the strength of the candidate who out-raised the incumbent over the past two fundraising quarters and has brought in the most high-profile state and national endorsements to date in the primary.

“I am thrilled to be in this fight for hard-working families, ” Greenfield told her group of supporters outside the Capitol. “I’ll never forget why I’m in this race, unlike Sen. Joni Ernst — she doesn’t stand up for Iowans with preexisting conditions.” 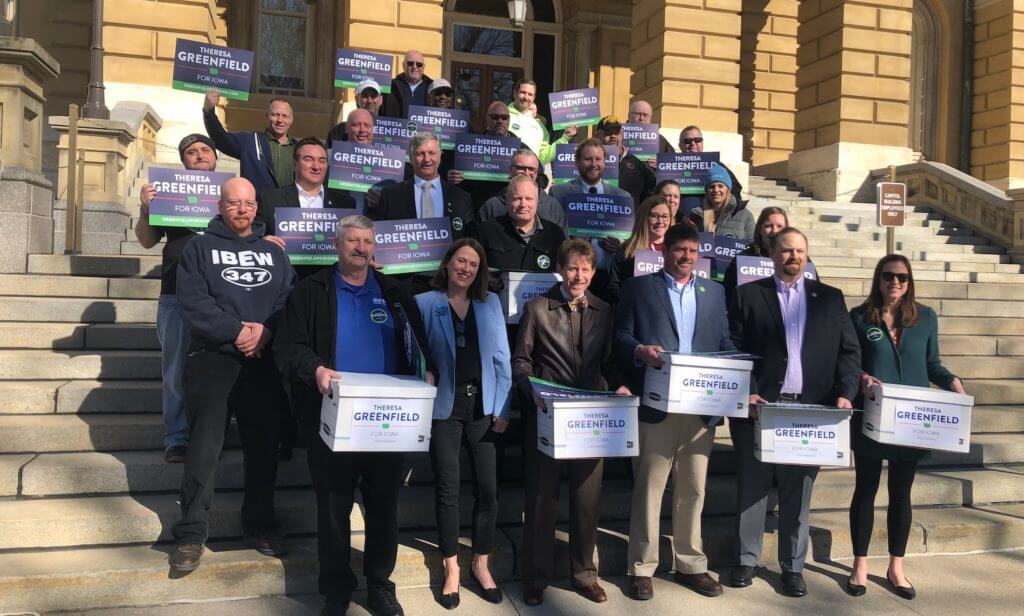 The filing period for state and federal candidates in Iowa closes March 13, but the field of U.S. Senate candidates likely is set.

“She’s left Iowans behind,” Greenfield said of Ernst in an interview with Starting Line afterward. “She told us she was going to be independent, different, make em’ squeal. Nobody is squealing in Washington, D.C. Instead, I think she has really fought hard for her corporate PAC donors.”

Central to Greenfield’s message for the general election is health care.

“I’m going to go to the U.S. Senate to work hard to make sure absolutely every Iowan has affordable, high-quality health care. Period. Sen. Ernst’s votes would be devastating to Iowans if we didn’t have the ACA … the Medicaid expansion of the ACA has really saved rural and urban hospitals,” Greenfield said. “We’ve got to do a better job, though, we have to improve the Affordable Care Act. I support a public option as a first start.”

A large part of Greenfield’s biography is rooted in rural issues; she grew up in small community in Minnesota just across the Iowa border.

“I grew up rural, came of age during the farm crisis. Had to put myself through community college,” she said. “I’m going to put Iowans’ interests first, not the interests of large corporate PAC donors. I’ve taken a pledge not to take one dime of corporate PAC donations.”

That issue of corporate PACs and ending political corruption in D.C. has been key to Greenfield’s message of late. She rolled out a large anti-corruption proposal last month and has targeted Ernst for the support and possible coordination she’s had with the Iowa Values organization.

But Greenfield has also gotten push-back from Franken, one of her Democratic competitors, over the help she’s receiving from a national Democratic PAC that has begun running TV ads on her behalf.

“I can’t control what those groups are doing today, I would love to see them all to disclose their donors, but my plan is to work toward ending Citizens United,” Greenfield explained. “That would eliminate some of these problems we’re having today.”

According to the campaign, Greenfield collected three times the number of signatures needed in suburban Dallas County and more than double the requirement in swing counties like Dubuque, Jackson, Clinton and Cerro Gordo. Due in part to her Minnesota upbringing, her campaign noted, Greenfield also had “strong showings” in Northern Iowa where she “has especially strong roots.”

Greenfield leads the Democratic field in fundraising and endorsements, raising $1.6 million in the final quarter of 2019.

Greenfield’s campaign has pointed out that they have received more than 9,000 campaign contributions from Iowans across the state’s 99 counties and were endorsed by End Citizens United, a group working to rid politics of corporate influence.