Iowa Democrats added a lot of new voters to their rolls thanks to the Iowa Caucus, gaining a net of 27,385 new registrations from the February to March report. It was only about half as large an increase that followed the historic 2008 caucus, but it was still enough to put Democrats ahead of Republicans in registrations for the first time in years.

But the gains were not evenly distributed throughout the state, with several trends that have developed over the Donald Trump partisan realignment years showing up once again in this data.

Let’s first take a look at the top ten counties for raw number of Democratic registration gains. You can follow along and draw your own insights from our large, somewhat messy spreadsheet.

The top three are what you’d typically expect in a contested Democratic caucus: big increases in the three counties with the largest activist bases, where you find a lot of higher-educated liberal voters. These three and Dallas County are also among the places where Democrats have improved their margins the most during Trump.

But most of these counties are also at the top simply because they’re some of the largest in the state. The more interesting data is found in the percent increases among registered Democrats. That gives us a much different list of leading counties where Democrats gained the most as a percentage of their previous registration totals:

Here again, we have counties with large suburban or higher-educated populations, like Story, Johnson, Polk and Dallas, in the top ten.

Story County increased their Democratic registrations by over 12%, the best in the state. Democrats’ increasing dominance in Story County has been one of the under-appreciated stories of the Trump era. Most just assume that it’s always been a significant Democratic stronghold thanks to ISU, but while Democrats have almost always carried it in general elections, the turnout and margins for Fred Hubbell there in 2018 were a marked gain from past years, especially compared to past state-level races:

Several of the other counties with the biggest jumps are smaller, rural ones with college campuses: Winneshiek (Luther College), Poweshiek (Grinnell College) and Bremer (Wartburg College).

When we take a look at this on the map (click here for larger version), we can try to identify some other trends. 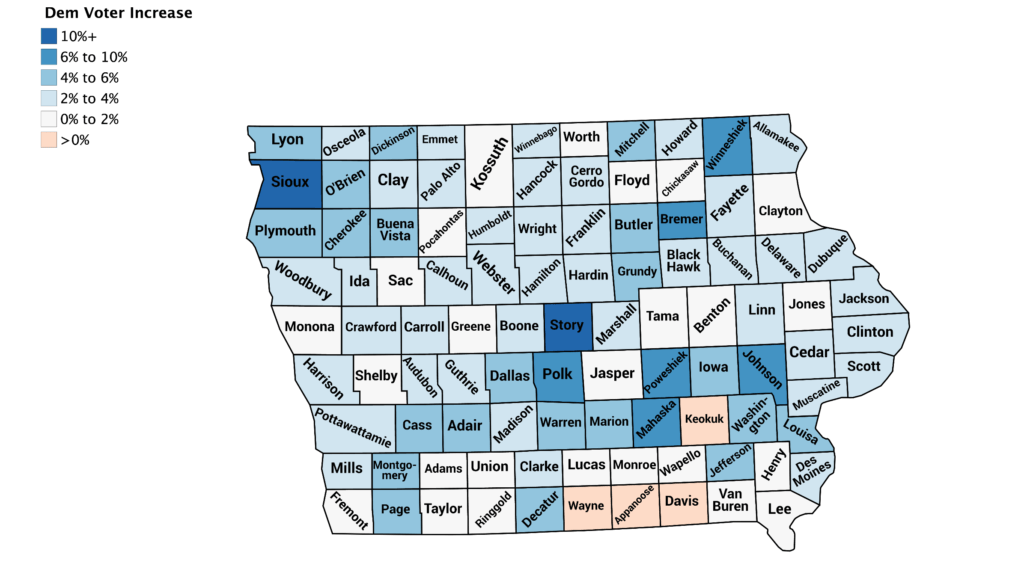 A cluster of the best increases for Democrats are all in the northwest corner of the state. Part of this may be due to there being so few registered Democrats in Northwest Iowa to begin with that any change is meaningful, but the same didn’t happen in other smaller, Republican counties in Southern Iowa. Even though Sioux County is the most Republican county in the state, it has interestingly been moving ever so slightly away from its deep red hue during Trump.

While this obviously remains the most conservative corner of the state, improvements here for Democrats could give J.D. Scholten a small boost in his rematch with Steve King this cycle.

Across most of the state outside the metro areas and college towns, there aren’t many clear regional trends, save for the southern tier of counties and Southeast Iowa. Democrats actually saw their registration numbers decrease in Wayne, Appanoose, Davis and Keokuk counties, and they did rather poorly overall across the two lines of counties closest to Missouri.

Out in Eastern Iowa, Democrats only slightly improved their numbers in the blue-collar counties that used to be the base of the Democratic Party in Iowa but have moved right under Trump. The Mississippi River counties of Dubuque, Jackson, Clinton, Scott, Muscatine and Des Moines only saw modest registration gains for the party.

The counties that improved without any clear reasoning, like the northwest regional boost or a sizable college campus, were: Mahaska, Grundy, Butler, Mitchell, Cass, Adair, Montgomery, Page, Decatur, Iowa, Washington and Louisa. Democrats or the campaigns there just must have been particularly well-organized.

A Caveat On Active/Inactive Registrations

There is one caveat to mention: it appears that several county auditors also did some large voter roll maintenance/clean-up during this time period, which moved large numbers of active voters to inactive status (we’re only counting active Democratic voters in our charts/maps for a variety of reasons). A voter is moved to inactive if they haven’t voted in several election cycles. This is why the overall voter registration numbers for Iowa oddly dropped slightly the month after the caucuses.

You can dig through the spreadsheet if you want, but this probably had a small impact on some counties, but not the larger trends. For example, Dallas County saw a huge 51% jump in the number of inactive registrations. They had 427 registered Democrats moved from active to inactive. If those had all stayed active, Dallas County would have seen an overall 8.7% increase in Democratic registrations as opposed to a 5.9% jump. Similarly, Jasper County would have seen a 2.7% increase instead of their 1.3% improvement.

You’re welcome to play around with the numbers if you wish, but the bottom line is to not fret too much if your county saw a 2.5% increase while the next one over had a 3.7%.

We’ve got some interesting numbers when we compare things by congressional district, both on the raw vote change and percentage improvements:

But that’s the problem with the 1st District: there isn’t a major county there experiencing those large voter trends under Trump that favors the Democrats. Linn County had a big inactive registration jump; if you put those back into the active column, Linn had nearly a 5% increase, which is better than their 3.5% in our spreadsheet, but still not moving as quickly for Democrats as other urban centers are.

For the Iowa House districts, let’s take a look at the top 15 districts for Democratic registration percentage changes:

Most of these 15 are either in deep blue or red districts, but a couple spell good news for House Democrats’ targeted swing districts. Karin Derry, John Forbes and Kenan Judge’s suburban Des Moines districts all saw good increases, helping them in their reelection efforts. Republican John Landon of Ankeny won’t enjoy being on this list, another sign that he faces a very tough election against Andrea Phillips this year.

There are a few that are concerning, though. Mary Gaskill’s Ottumwa-based HD 81 saw the second-lowest percentage increase in registered Democrats in the state. Todd Prichard and Wes Breckenridge’s districts were in the bottom ten, as well.