Finally. We have numbers.

Just not all of them.

After a disastrous caucus night where the Iowa Democratic Party could not release results, they finally posted 62% of the precincts this afternoon at 4 p.m. While they’re not complete, we can still glean some very interesting observations from them.

Let’s start with some statewide numbers (again, which aren’t complete) and then delve into precinct-by-precinct observations — those we can analyze with more certainty right now since individual precincts are fully in.

Five Tickets Out Of Iowa?

With just these precincts in, you can’t call a winner yet. But there’s one candidate who definitely lost: Joe Biden.

He’s currently on track to come in fourth place, confirming what many of us saw on caucus night itself: Biden groups simply struggling to make viability in a surprising number of precincts. Right now, he’s at just 15.6% of the state delegate equivalent results, with Amy Klobuchar close behind at 12.6%.

For a while, it looked like just Biden and Bernie Sanders could emerge as the main contenders from the early states. Now, there’s new life for Pete Buttigieg, Elizabeth Warren and Klobuchar. If the front-runner Biden follows up Iowa with similar showings, he’ll be in free-fall come Super Tuesday, opening up this race significantly.

More concerning for Biden: he does not appear to have won any of the mostly-African American precincts that are reporting right now. Sanders carried most of those.

Meanwhile, Klobuchar can legitimately make the case that this is a five-way race after her impressive showing that sits right now at just three points off Biden.

After a bruising month in the media that damaged his national polling, Buttigieg’s strong Iowa operation and nonstop campaigning here got him to where he may yet win. He’s in the lead at the moment with 26.9% of SDEs, though Sanders is at 25.1% and most of Black Hawk County, which should be good for Sanders, is out.

Still, Buttigieg’s main goal isn’t beating Sanders now, it’s setting himself up as the Sanders alternative down the stretch. He accomplished the first step in that here, now he has to prove an ability to quickly boost his numbers among African American voters.

The Sanders team was headed into the caucus very confident. They may yet win the SDE number (which is what news organizations are using as the official “win”) or not, but they are in a good place to win the initial raw vote on first alignment (the popular vote, if you will). His first alignment number is currently at 27,194 Iowans to Buttigieg’s 23,763.

But two big concerns stood out.

First, turnout is not looking that great statewide. It may be closer to 2016’s total (170,000) than 2008’s (240,000). Sanders’ entire rationale for his electability is that he can turn out new voters. He certainly did some, but this wasn’t the groundswell it seems they were shooting for.

Second, Sanders failed to bring many people to his corner during realignment, showing he may struggle in winning over other candidates’ supporters when they eventually drop out. From first alignment to second alignment, Buttigieg gained 3,364 overall, while Sanders only netted 1,132.

It wasn’t a great night for Warren, but it wasn’t bad either. The most important thing is that Biden’s weakness changes the nature of the race.

Alright, now let’s take a look at the results that are fully in: individual precincts. The New York Times’ results map can be seen by precinct. These confirmed what we thought about candidates’ particular strengths, but it’s still interesting to see it play out with real voters.

In Iowa’s largest county, we can see how each candidate’s advantages played out. On the Times’ map, Buttigieg is yellow, Sanders is blue, Klobuchar is green, Biden is purple and Warren is orange.

Buttigieg swept many of the suburban precincts, winning much of Ankeny, Johnston, Urbandale, Clive, Waukee and West Des Moines. Warren and Klobuchar often picked up a decent number of delegates here too.

Warren carried an important, delegate-rich precinct in the upper-income liberal area in the Beaverdale neighborhood. Klobuchar also picked off a couple suburban precincts, while Biden has carried all of two precincts in Polk County so far.

Right now, the county map could still change based off precincts outstanding. But currently, we can see Buttigieg carrying much of rural Iowa, while Sanders is doing well in many of the urban centers around Sioux City, Council Bluffs, Des Moines, Cedar Rapids and Iowa City. Klobuchar will pick off several rural counties, including some in Northern Iowa, while Warren isn’t leading in a single one yet.

Glancing through the precincts, it seems that Warren did decent all across the board, showing up with delegates in many precincts, just not winning many of them. In an odd way, that speaks to her message of being the candidate who can unify the party because she appeals to all parts of it, but these results also show she lacks one core, strong base that can carry her in certain areas. 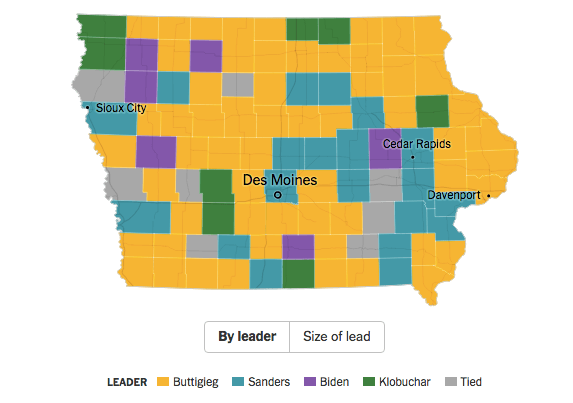 Buttigieg’s biggest lead right now is in Dallas County, home to the fast-growing suburbs west of Des Moines. Sanders’ best lead is in Woodbury County, which has a mix of working-class, rural and Latino voters.

In many counties, Biden is struggling. He’s only at 3.9% in Johnson County, the most Democratic in the state. Perhaps most worrisome, Biden is currently in third place in Dubuque County with 21.7%, trailing Buttigieg (27.5%) and Sanders (24.6%). Dubuque is the ancestral homeland of the Biden voter, so if he can’t win here, that could spell bad news for him in working-class, formerly Democratic strongholds in other parts of the country in the primary.

Starting Line will wait to do much more analysis of the results until we have the rest of the precincts in.