Round and round Iowa, the candidates go.

A lot happened this weekend on the Iowa Caucus trail, from major endorsements to huge turnouts at rallies with musical guests, but the takeaway remained the same: this is still anyone’s game on caucus night.

For every candidate who saw overflowing crowds at their rallies, a different contender on the other side of the state had just gotten a major endorsement that could sway the many still-undecided Iowans, while another got a surprising poll result. Any slim advantage could push someone over the top on Feb. 3, and all the Democrats seemed to be finding theirs in the final stretch.

The weekend began with a New York Times/Sienna poll that placed Bernie Sanders in the lead, outside the margin of error, adding to other surveys that show him surging at just the right time. The energy at his events was more than enough real-life evidence to back those numbers up.

Young people came out in droves for Sanders’ college campus events, as they did in 2016, but the most impressive event was in Sioux City, where over 1,100 people packed the convention center to see Sanders, easily the largest event there by any candidate this cycle.

Sanders brought out the big guns for his final two weekends in Iowa, squeezing in as many rallies and town halls as he could between the Senate impeachment proceedings. Rep. Alexandria Ocasio-Cortez, filmmaker Michael Moore, and musical guests Brian Posner and Portugal. The Man all joined the traveling road show for Sanders.

AOC herself participated in eight separate events, helping bring out over a thousand people at the University of Iowa on Friday night, an event without Sanders. About 1,400 showed up to a boisterous rally at Iowa State University in Ames.

“We are taking on the Democratic establishment, and all across the country, let me tell you, that the big money interests are getting very nervous,” Sanders said in Ames. “They’re looking at recent polls in New Hampshire and in Iowa and they’re saying, ‘Oh my god, Sanders can win.'”

Also on Saturday morning, Rep. Cindy Axne, one of the last remaining high-profile Iowa Democrats yet to endorse, threw her support behind Joe Biden. That gave the former vice president the backing of two of the state’s three Democratic House members, and helped bolster the electability argument he’s hammering home here at the end.

“I believe we need a Democratic nominee who not only has the vision to rebuild our alliances and strengthen our middle class, but who can win in November,” Axne said in her endorsement. “He is someone who appeals not only to Democrats, but to independents and Republicans as well.”

Both Axne and Rep. Abby Finkenauer, who previously endorsed Biden and campaigned with him again this weekend, face competitive reelections after defeating Republican incumbents in 2018. State Rep. Mark Smith, who recently led Iowa House Democrats’ efforts to win swing districts when he was the party’s leader in the House, also announced his support of Biden.

Put together, the endorsements drove home a clear message: many prominent Iowa Democrats running in tough races in 2020 want Biden at the top of the ticket.

And Axne could help lift up Biden in the Des Moines metro’s suburbs, where an intense battle for high-delegate precincts will play out. Biden stumped in Ankeny on Saturday night, joined by Axne and Attorney General Tom Miller.

Another Democrat was celebrating a major endorsement later on Saturday. Elizabeth Warren did a little happy dance upon learning that she had won the coveted endorsement of the Des Moines Register’s editorial board.

Elizabeth Warren learns she’s been endorsed by the @DMRegister pic.twitter.com/lR7xPItkFz

“She is a thinker, a policy wonk and a hard worker. She remembers her own family’s struggles to make ends meet and her own desperation as a working mother needing child care,” the Register board wrote. “She cares about people, and she will use her seemingly endless energy and passion to fight for them.”

The newspaper’s write-up could be more important than usual this year, considering the number of wavering caucus-goers still making their decision.

On Sunday, Warren appeared before one of her most enthusiastic audiences here in months, with around 900 people packed into the NewBo Market in Cedar Rapids. Jonathan Van Ness, star of Queer Eye, helped rev up the crowd beforehand. Also joining her on this Iowa swing was her dog Bailey, who commanded his own selfie line after events. 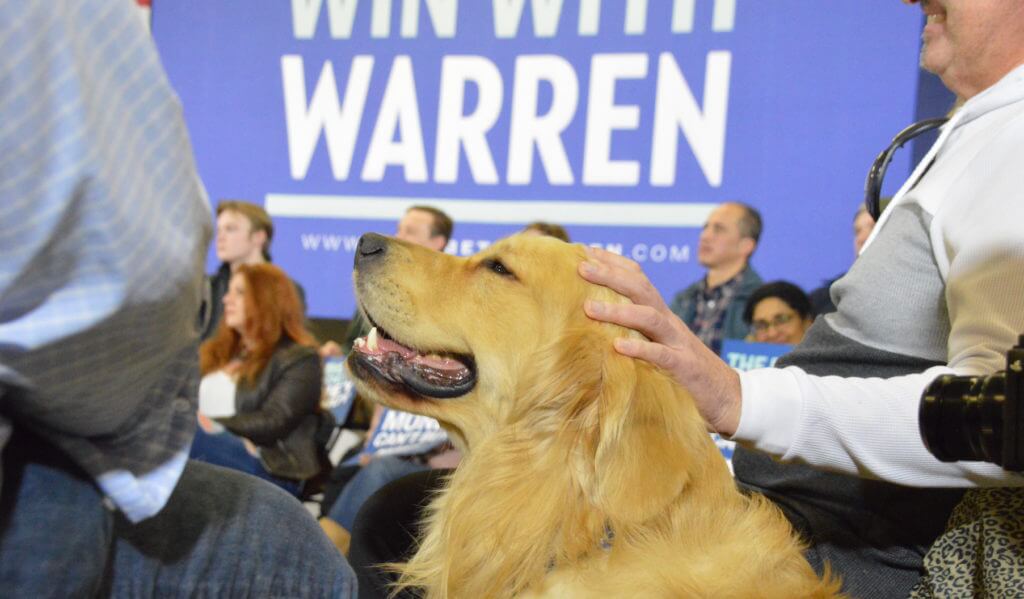 The candidate herself seemed particularly energized this weekend. Warren has one of the more set stump speeches, but she added in a new, closing message for Iowans on this trip, which she delivered in a fiery manner at the Scott County Democrats dinner on Saturday night. 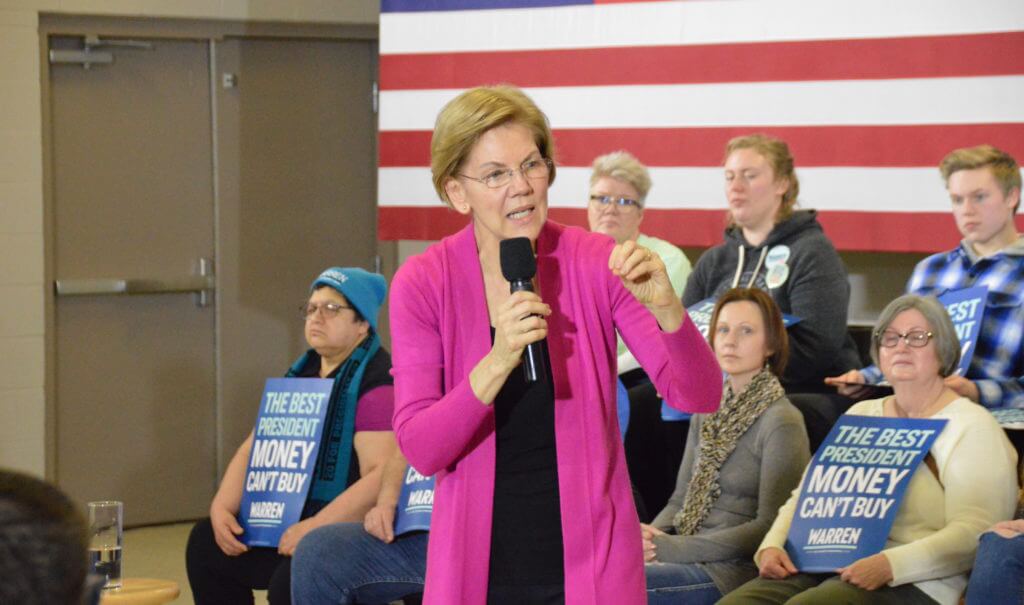 Meanwhile, on the western side of the state, Pete Buttigieg once again was drawing the kind of crowds in rural Iowa that could preview a victory for him on caucus night. Over 300 in Fort Dodge and Carroll. Two-hundred and fifty in Storm Lake.

“What I’m seeing on the ground among voters is a desire, especially here in the Midwest, to have somebody who can speak to the concerns of communities that have been overlooked and have felt like the Democratic Party isn’t really connecting with them,” Buttigieg said in Storm Lake. “I think it’s part of why we defied a lot of expectations a couple of years ago and I think it’s part of what will carry us to success on caucus night.”

Add strong, if not winning, performances in much of rural Iowa to Buttigieg’s strengths in the Iowa’s suburbs — he turned out 1,200 in West Des Moines on Sunday — and that looks like a first or second-place finish for the former mayor.

And Buttigieg also made a concerted play to show off how he could win over frustrated Republicans and Trump voters. He drew a standing ovation from the audience at his Fox News town hall in Des Moines on Sunday evening, with his appearance there likely getting his face in front of many voters who aren’t seeing much unfiltered news about the Democrats. Even if that intrigues a few hundred Iowans to go out to caucus for him, that will be a very useful boost for Buttigieg.

But for each of the four front-runners, just when you think it’s all coming together, little things stood out that raised concern.

Biden’s crowds, though they’re growing, continue to be a shadow of what Buttigieg and Sanders are producing, and one wonders what new voters he brings out in a record turnout year at the caucus. Sanders, who is relying in part on mobilizing first-time voters from the Latinx community, still had a mostly white crowd in Perry, a town that’s about 40% Hispanic. Buttigieg still needs late-decider momentum to solidify his place, and losing things like the Register’s endorsement to Warren doesn’t help. Warren’s first event in Muscatine on Saturday drew only around 75 people. Amy Klobuchar appeared to bring out more than that at a bar across town an hour later.

Those other candidates outside the usual top four still present an element of uncertainty.

Klobuchar drew over 400 people out to her Ames event on Sunday, where she got an unexpected endorsement from a local legislator. Her team excitedly shared an Emerson Poll that showed her pulling into third place in Iowa on Sunday evening. The senator seemed to certainly make the most of her precious short time in Iowa; she’s hurt perhaps the most by the impeachment trial sidelining candidates.

But the candidate that perhaps more eyes should be on at this point is Andrew Yang, who was in the middle of his 17-day bus tour throughout Iowa. Bringing out nearly 250 people on a snowy Friday night in Fairfield, with the help of former candidate Marianne Williamson, Yang delivered a well-honed, convincing argument that might win over more Iowans than many expect. 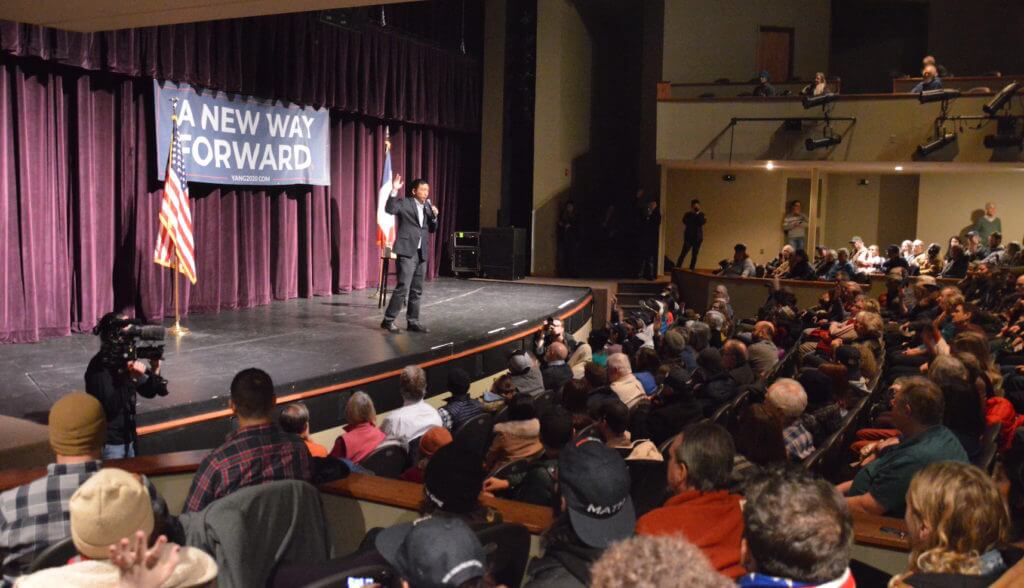 And his barnstorming of Iowa, visiting many smaller towns and rural counties that no other candidate will get to between now and caucus night, lets Yang be the last candidate many Iowans will see in person. His wife Evelyn is adding to the territory the campaign can cover, as she gave one of her first speeches on behalf of her husband at the Scott County Democrats event on Saturday.

Evelyn Yang speaks on behalf of her husband @AndrewYang for one of the first times at an event at this Scott County Democrats dinner in Bettendorf pic.twitter.com/t5JDwB6zMv

Still, many of the voters Starting Line reporters spoke with at events remained undecided.

“I want someone who’s going to win, more than anything in the world,” said Gary Lapsey, 65, from Cedar Rapids, at Warren’s event there. “And they say Biden’s got a lot of support down south. I don’t want people to stay home like they did last time. So that’s what’s tearing me. I don’t know if Warren has much of a black audience or not.”

Plenty of them are still thinking they’ll head into caucus night undecided, making up their mind on the spot.

“I’m completely undecided,” said Sarah Blakeney, 26, of Cedar Rapids. “I think I’m going to go in with a few in mind but I’m pretty impulsive, so I can see myself at the caucus making that decision.”

Other polls released over the weekend showed a mixed picture with mostly slight Sanders leads. A Suffolk/USA Today poll released Sunday afternoon had Biden on top with 25% and Sanders second at 19%. CBS News put Sanders at 26% and Biden at 25%. All of the new polls put together has Sanders with a lead, but not one so large that things couldn’t yet shift, especially with so many undecided.

One more thing to watch: the weather. It could be great (well, for Iowa).

Early forecasts for next Monday is a high of 41 degrees and partly sunny. That could send turnout for the caucus soaring to even higher levels than was already expected. And if the electorate is expanded beyond the campaigns’ projections and strategies, all bets are off.