Or at least that’s what his wife, Kat Taylor, said on his campaign bus earlier this month while in Iowa, supporting his largely self-funded bid. The two have been united in their personal lives to their pledge to give the bulk of their money to charity; now, both are out together on the campaign trail to bring even larger change to America.

“When I married Tom, we actually took two vows,” Taylor said in an interview with Starting Line. “Our marriage pact, but also, we made a commitment to leave everything on the table in a fight for a better world. Our money, our time, our energy, our access. Everything.”

Voters should get to know Taylor, in part because she’ll be out on the campaign trail in early states a lot more. At the start of this year, she took a leave of absence as CEO of Oakland-based Beneficial State Bank to drive home her husband’s candidacy.

And one of the other candidates out campaigning along with Steyer is one of Taylor’s personal heroes: Elizabeth Warren, a fellow leader in the fight for a fairer banking system.

A Political Force In Her Own Right

While riding through Western Iowa in early January on the argyle-clad Steyer bus, it became clear that Taylor’s a campaign spouse you could just as easily see running for the job herself. As a decades-long industry leader, Taylor has before combined philanthropy, business and political will in hopes of positively impacting the world.

The bank Taylor headed has a mission to bring “beneficial banking” to low-income communities in an economically and environmentally sustainable manner. Beneficial State Bank came about after OneCalifornia Bank, which Taylor founded with Steyer in Oakland, California, merged another Pacific coast-based bank.

“Banking is another form of nation-building – we pool our idle cash, our deposits to finance the world in which we actually wish to live,” she said.

She’s focused in her efforts on banking in part because of all the harm the industry can cause when it’s misused. Taylor cited redlining, home foreclosures, the financing of fossil fuels and how a third of bank tellers are on public assistance as some examples.

“These are massive organizations. The industry itself spends twice as much on political lobbying and candidacies as any other industry,” Taylor explained. “For all we think of oil and gas is running the world, which it is in part, it’s really the finance of oil and gas that’s so powerful. So, it’s a system we have to get right.”

“We have to discipline the banking system to be back in the public interest,” she added.

That interest brought her into circles with Warren in recent years.

Richard Cordray, who worked with Warren to establish the Consumer Finance Protection Bureau and served as its first leader, was recruited by Taylor to the board of her bank. Taylor was so impressed with Warren’s efforts, she’s trying to replicate the CFPB with Cordray at the state level in California.

“One of the things I respected so much about Elizabeth Warren is her brave establishment of the Consumer Finance Protection Bureau to protect consumers against the worst excesses of the banking system,” Taylor said. “I don’t get to talk to her as much anymore, to be honest. But we’ve known her personally in the past, done some fundraising for her … We recruited Rich [Cordray] to help us try to establish a CFPB at the California state level in the hopes of inspiring other states to do the same.”

Her other leading passion is one she shares with her husband: climate action.

TomKat Ranch Educational Foundation, where Kat is the founding director, is a California ranch where sustainable food production is attempted through ranching, tours, research, and school lunch and garden programs.

The goal is “de-risk regenerative agriculture” — basically, test out experiments that most farmers can’t afford to do themselves on creating more sustainable agriculture methods.

“Healthy soils is the basis of a healthy society,” Taylor said. “They are critical not just to feed the world, but also to restore the balance of carbon. Soil is our last great carbon sink. The estimate is now agricultural soils are only 1.5% carbon, when historically it was at 11%. So you know where the difference is, it’s in the air and the oceans, and we need to put it back in the soil.”

TomKat Ranch is meant to “present a playbook” to go from industrial agriculture to sustainable agriculture in a way that helps make farmers money, Taylor said.

“We’re running a huge amount of science on the property,” she added, to “help farmers find a path to regenerative ag that’s profitable.”

Taylor noted that a regenerative agriculture policy piece she co-authored is cited in Warren’s agriculture plan.

Leaving It All On The Table — All Of It

The ranch, along with other of the couple’s projects, are some of the ways they’ve looked to give back to the world after amassing significant wealth themselves.

And Taylor and Steyer believe so much in their Giving Pledge devotion, which they were recruited by Bill and Melinda Gates to do, that they won’t be a couple that hands off immense wealth to their children. Instead, Taylor said, their children will be inheriting the world as a “better place” thanks to the charitable work.

“We made our commitment known to them that we were leaving everything on the table to make the world a better place,” Taylor said. “What we’re giving them is the most excellent education and excellent health care, not worry about their own families. But beyond that, they are not inheriting anything.”

The Steyer kids must not mind too much. Two of the four of them are working full-time on the campaign in Iowa. Taylor noted that she was particularly proud that they had all chosen career fields where you give back, including clean energy and responsible finance.

But even though much of their later life has been defined by philanthropy, Taylor noted that she’s well aware that that alone isn’t enough to solve America’s problems.

“Philanthropy is not enough to get us out of the pickles that we are in,” Taylor said. “I’ve actually been personally busy on seeking reform of the philanthropic rules, because we have to remember when we allow philanthropy, we are allowing a large tax deduction that deprives government of otherwise tax receipts they would be getting, and we rely on government to fund really important things like public education, pollution mitigation, climate resilience, etc. So, I have a somewhat limited view of philanthropy in the first place.”

The “Billionaire” She Knows

On the trail recently, Steyer often talks about how the “B-word” (billionaire) doesn’t define him. And it’s actually relatively easy to forget about his wealthy status when you see him in person — whatever you expect a billionaire to act like, it probably isn’t what you get with Steyer.

Taylor said that’s the kind of man she’s known of Steyer since first meeting him, when they were training for a marathon together.

While breakfast after their first time on a run together, Steyer told her about his current job. He had been working at a private equity firm that had a large investment in an air conditioner company in the South.

“He said to me, ‘You know, it turned out, I was really bad at selling air conditioners.'” Taylor said. “And I actually hadn’t heard an aggressive, competitive, ambitious business person ever admit to not being able to do anything. But that’s Tom Steyer. He’s very truthful about himself.”

His Democratic competitors have tried to make his wealth a weakness throughout the campaign. Taylor, as many other candidate spouses that Starting Line has spoken with, said she tries to not take the criticism of her husband personally.

“He’s a very, very moral, upstanding person in my view and my children’s view,” she said. “So when there’s criticism, we consider it if it doesn’t fit, then we leave it behind. We can’t really afford to have hurt feelings in taking a stand like this. It’s too important for the future of our species and this country.”

Taylor On Her Husband’s Fashion Sense

Taylor thinks that the biggest obstacle to Steyer’s candidacy is his lack of celebrity status. But Steyer has benefited from some high profile moments on the trail, some because of his highly identifiable uniform, including a red plaid tie.

“The tie is his ability to add some color to the basic business suit look,” Taylor said. “It’s a family plaid — he has Scottish roots. He wears an African belt, which was purchased when he was on a trip to a girls’ school in Africa. The belt is also an attempt to add color to his look, but also a reminder that when we educate women and girls, everything gets better.” 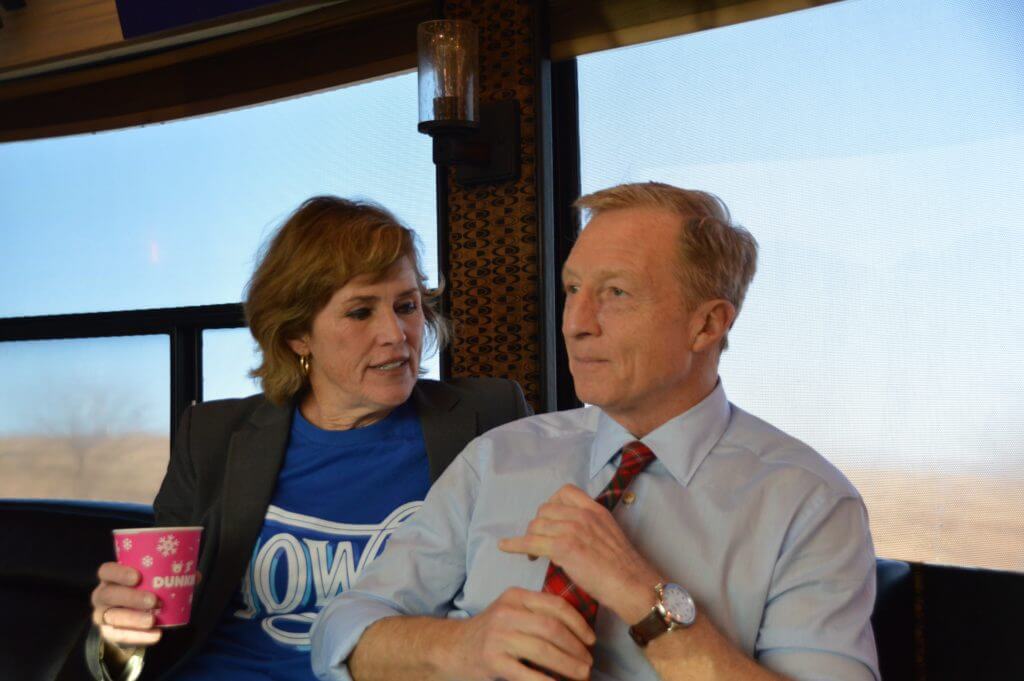 Steyer is very “ritualized,” according to Taylor, who said he draws crosses on his hand every day to remind himself of humility and telling the truth. He also puts jasper stones, igneous rock from the Lake Tahoe basin, in his pocket every morning to remind him of the natural world and their commitment to restore and protect it.

“I would call [his fashion sense] highly individual. He is who he is,” Taylor said. “He is the oddest combination of competitive and ambitious, at the same time he is humble and very generous … He tells the truth, then he does something about it.”

2 Comments on "Get Ready To Know Kat Taylor, Tom Steyer’s Better Half"