Whenever a major political or world event happens, the attention during this presidential primary quickly turns to how the individual Democratic candidates will respond. Where’s their statement on the matter? Will they tweet out a response? What will the candidate say in a press gaggle?

With the way news spreads so quickly on Twitter now, there’s pressure for the candidates to respond near-instantaneously. Obviously, this isn’t always realistic.

While candidates are on the campaign trail in an early state, there’s also the added problem of their packed schedule. They may have three events in a row where they’re on stage, speaking or taking questions, with limited time in the van or bus in between, time that already may be blocked off with something else. There may only be a 10 or 15-minute window after an event where a candidate can huddle with staff, take in the new information, talk over a potential response and then sign off on a statement.

A perfect example of this dynamic happened this week with the news that top Iranian official Qassem Soleimani had been killed in an U.S. air strike in Iraq.

Starting Line was with Tom Steyer as the news broke and the following day as the Democratic field fleshed out their Iran positions. Steyer’s campaign also provided to Starting Line today a tick-tock of how their senior leadership team learned of the news, discussed it with Steyer and came up with a response.

Let’s take a look at the timeline.

The initial indications of something big happening in Iraq begin to pop up around 5:30 PM on Twitter. The chatter picks up online around 6:00 PM, and it really starts to hit American political Twitter closer to 6:30 PM.

Steyer got on his bus, roughly around 5:45 PM, after a stop at his hotel in Sioux City to ride just a few minutes over to his event at the Sioux City Convention Center.

After watching his wife introduce him, Steyer takes the stage in Sioux City, his fourth and final event of the day in Western Iowa. Around 6:40 PM is the first confirmations of Soleimani being killed in an attack at the Baghdad airport. Steyer’s campaign team begins to learn the initial details while Steyer is speaking. 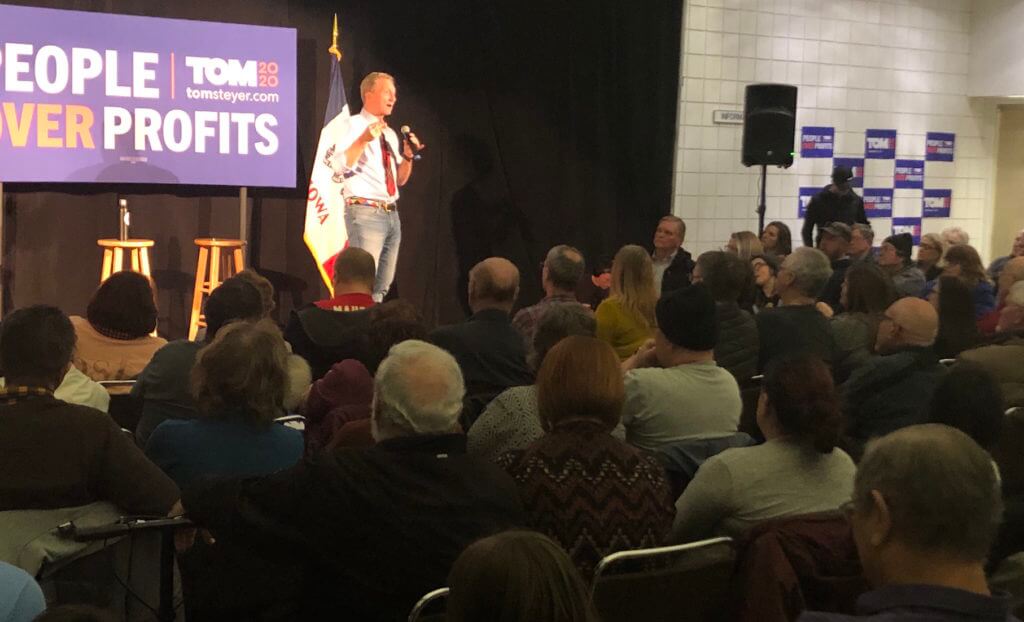 Not too many people in the audience, which was largely an older crowd, were on their phones while watching Steyer, and none of the questions during his Q&A were related to foreign policy.

The candidate spent the next half hour or so once he was off the stage doing a photo line with the event attendees.

After seeing off the last attendees, several campaign aides informs Steyer of the news. He asks them whether President Trump has made a statement yet. Informed he hasn’t, Steyer expresses his concerns about the safety of Americans overseas and how the fallout will play out.

Immediately after, Steyer walks over to do a gaggle with reporters in the corner of the room. About three local and four national/state reporters are on hand. 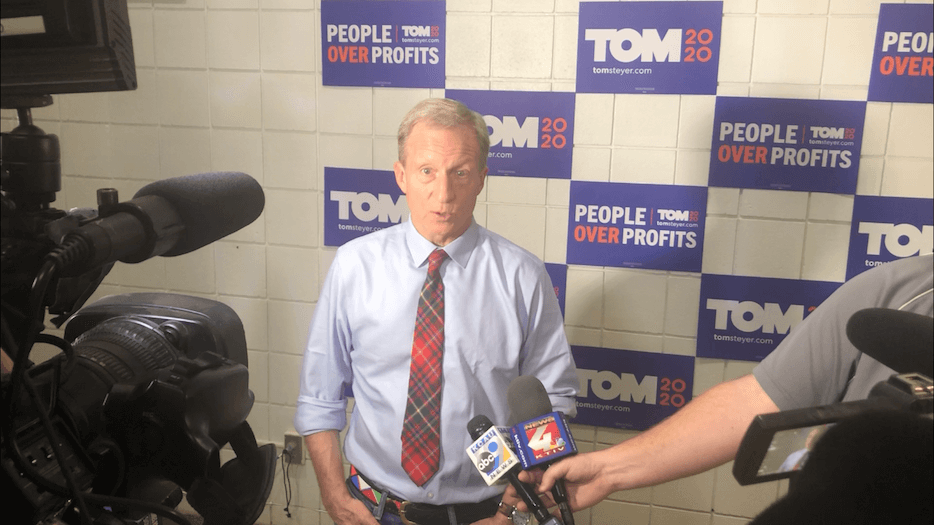 After several local questions, the Washington Post’s Dave Weigel asks Steyer about the Soleimani situation, noting that it was still developing.

“I just saw it, literally when I stopped talking to the last person in the audience, I literally just read a very brief summary of the story,” Steyer says. “What we can see is that there is a continuing escalation of hostility between us and Iran-backed forces in Iraq. I need to see much more before I say what’s important. But what’s clear is that the President’s determination to step away from the negotiated agreement with Iran … and to go it alone in a very confrontational fashion is escalating problems. I want to read this story to make sure I understand exactly all the ramifications, but we can see this is a direct result of his ‘America First’ strategy of confrontation and bilateral, unilateral act.”

After that, Steyer heads back to his hotel.

Senior leadership of the Steyer campaign both in Iowa and back in San Francisco huddles with the campaign’s policy team to put together a detailed background and briefing for Steyer to read in the morning.

Campaign staff continue to pull new details from the events in the Middle East.

The day starts early with Steyer boarding his bus around 7:45 AM for the drive up to his 8:30 AM event in Sheldon.

Steyer meets with Senior Adviser Zack Davis, Iowa Communications Director Leah Haberman and Senior Press Secretary Ben Gerdes to talk through the briefing from the policy team. They discuss the ongoing events and how the messaging strategy will play out with reporters and at public events. Steyer expresses his frustration that Trump doesn’t appear to have any long-term strategy with this new action.

The campaign is in their second day of an all-on-the-record bus tour, and Starting Line’s Pat Rynard and CBS News reporter Musadiq Bidar are on the bus during this leg of the trip. The first 20 minutes of press questions feature all foreign policy questions.

“Mr. Trump is doing exactly what he does in everything, which he is making an initial decision, often rash and ill-conceived, and then he’s doubling down on it and escalates his original decision,” Steyer says of his new thoughts on the manner. “It hasn’t turned out well. He’s a rash person who doesn’t do his homework and then insists that he’s right, he doubles downs and escalates a conflict that began when he pulled us … out of a nuclear deal.”

Steyer also mentions that he was able to read up more on the situation. 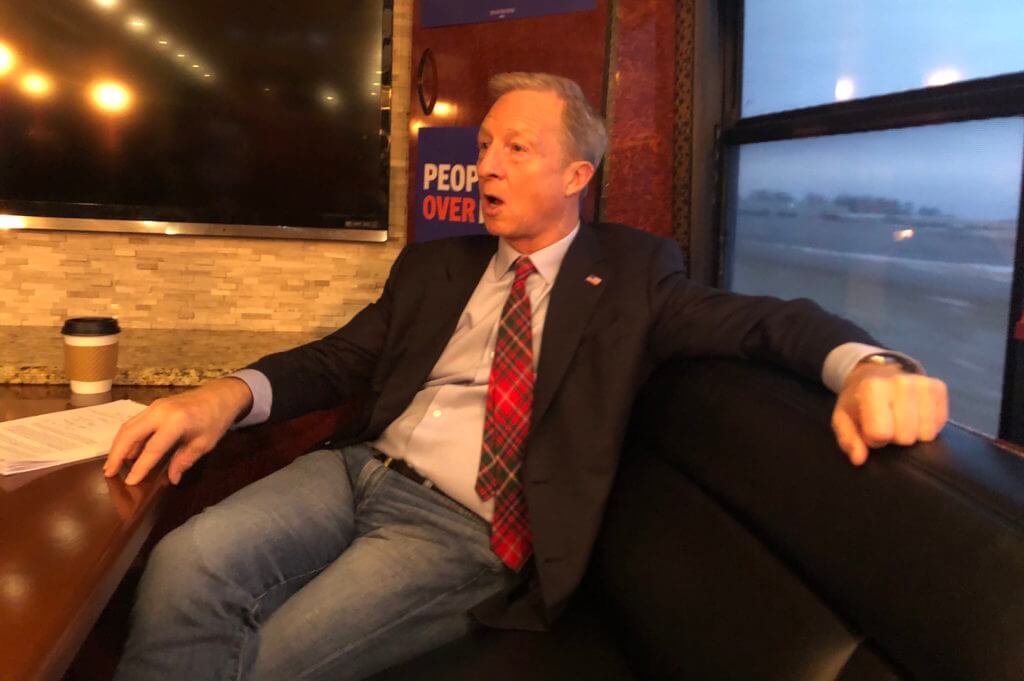 “I’ve been working around the world for decades,” Steyer says. “First of all, I have lots of international experience, and I think to a large extent, this is a temperament question. What are the goals you see for the United States, how do you perceive the role of the United States in the world, and how do you behave under duress? I think that’s something I feel very good about.”

“I actually feel as if I understand the way the world works in terms of interactions on a regular basis. What we’re seeing here is an interruption,” Steyer says.

In recent weeks, several Democratic contenders have once again brought up Joe Biden’s vote in favor of the Iraq War. Steyer is asked if he also found that a concern in judgement for Biden.

“I don’t think you can judge someone based upon a single decision. I think you have to look at someone’s record over a long period of time,” Steyer replies. “I will say this: I think the people who stood out and insisted on full information, weren’t swayed by the emotions of the moment, who actually thought seriously about protecting American lives … are the people whose judgement I respect.”

The bus arrives for his meet-and-greet in a snowy Sheldon, Iowa, deep in Northwest Iowa. Most of the national press corp is on the opposite side of the state where Biden, Bernie Sanders and Elizabeth Warren are campaigning.

After his usual brief speech, Steyer takes questions, and one of the first touches on Iran, though it’s mostly a broad query on foreign policy (video of the exchange here).

“The legacy of this administration is going to be the destruction of cooperation,” a local man tells Steyer . “You see today with the events of last night, Europe is very, very lukewarm to coming to our aid.”

“It’s a lot easier to break something than it is to build something,” Steyer says. “What the United States needs to do is to lead a coalition of freedom-loving, democracy-loving countries around the world to make the world safer together.”

Steyer’s campaign puts out the candidate’s first statement on the manner via two tweets.

It is essential that we protect American service members and citizens throughout the region while working with our allies to prevent further escalation that could lead to a devastating war that Americans do not want. (2/2)

Unlike some other campaigns, they don’t put out a longer statement via a press release. Joe Biden begins his morning with a formal address on Iran, but the media’s focus on candidate responses is aimed more at the front-runners.

Steyer’s next event is an office opening in Spirit Lake, where he begins his Q&A by saying he figures someone might want to talk about Iran. However, it’s not until the seventh question that an audience member brings up the Soleimani killing.

“This is somebody who was an enemy of the United States,” Steyer says. “But it was also a continuing escalation of the confrontation that Mr. Trump has invited since he withdrew us from the Iranian nuclear agreement that President Obama negotiated along with six of our allies.”

“Now we’re in a position where they vow — you know, they like to use excessive language — something like massive retaliation,” Steyer continued. “But what is true is that Americans are less safe. We are less safe as a result of it. I don’t know what the plan is, why this makes sense, but neither does anyone else. If we look at his other foreign policy moves, there’s never been a plan. He’s never gone to Congress to explain this.”

While headed to his next event in the bus, Steyer makes several calls, including with Deputy Campaign Manager Abdul Henderson, an Iraq war veteran who served as chief of staff to a congressional member on the Foreign Relations Committee. Steyer also calls David McKean, who was former Director of Policy Planning at the State Department before serving as the US Ambassador to Luxembourg.

His reckless behavior overseas puts American lives in danger without the necessary support from our allies or any apparent strategy for long-term success. (2/2)

Steyer continues to get more questions on Iran at later events, including in Mason City on Saturday.

At this point, Steyer has expanded his message on Iran to focus on Trump’s broken trust in the past.

“We don’t know whether [Trump] is telling the truth about whether there was an imminent threat,” Steyer says. “And this is a guy who’s lied 15,000 times. And here’s why you don’t lie 15,000 times: so when people have to believe you, when the chips are down, they can believe you. The problem with someone who lies 15,000 times is when he tells you there’s an imminent threat, you don’t know whether it’s true. When I look at what he’s done in Iran, it is an example of how not to lead.”