With one month to go until the Iowa caucuses, Dr. Jill Biden‘s schedule is nearly as packed as her husband’s.

“You’re traveling everyday,” Dr. Biden said, Friday afternoon at a campaign office in Davenport. “Like just this weekend alone I’m going to be in Alabama, then I go to Utah, then I go to Colorado — and this is all in two days. And I red-eye home Sunday night to Monday.”

“Then we go to New Hampshire,” chimed in her chief of staff.

As she addressed supporters in Davenport, Dr. Biden was on her third stop of the day. She began the morning at a town hall in Dubuque with former Vice President Joe Biden and Congresswoman Abby Finkenauer, then quickly shot south to Muscatine to visit the campaign office there.

“It’s the process,” she said, of the breakneck pace and constant travel. “And I really appreciate your being involved in the process. I know that Iowans take this so seriously because, let’s face it, you’re choosing the president of the United States.”

Thirty days stand between 14 candidates and the first-in-the-nation caucuses, forcing presidential hopefuls and their surrogates to criss-cross the state for the umpteenth time as they work to nail down caucus-goers.

At least 90 events will be held between now and caucus night.

Vice President Biden’s campaign took a significant step forward this week with news of Finkenauer’s endorsement. The 1st District congresswoman is the only Iowa representative to have publicly backed a candidate so far.

Dr. Biden, a community college professor, closed out the remarks Friday morning in front of 260 people at the University of Dubuque, calling specifically on teachers in the room to volunteer as precinct captains on Feb. 3.

“The one thing I know about teachers,” Dr. Biden said, noting her 35 years in the profession, “is that they are organized. They have a strategy, they have a plan to get things done. And most of all, they have a teacher voice to use at the caucus to bring people to their corner.”

In an interview with Starting Line, Dr. Biden said she was not surprised Iowans were slow to make up their minds this year.

“Iowans have not changed. I’ve been here before,” she said. “To their credit, I mean, they want to do a thorough job. They want to look at every single candidate. Unfortunately, this year, there have been, like, how many candidates? So, for them to hear all the candidates or spouses or representatives, the process has taken longer this time for people to commit.”

“I feel good about what I’m hearing,” she added. “I think Joe’s doing well here. We’re working hard and I hope we can win this.”

Bob Chambers of Davenport is an undecided voter who attended Dr. Biden’s event at the campaign office.

“What touched me the most, he’s the only candidate I’ve heard talk about national security,” Chambers told Dr. Biden.

Chambers, an Army veteran, told Starting Line he voted for President Donald Trump in 2016 but was looking for someone else to support this year because of Trump’s meddling in the case of Chief Petty Officer Edward Gallagher, a Navy Seal charged with committing war crimes while serving in Iraq.

“You can’t play king. You’re not the king,” Chamber said, of Trump’s intervention, against the will of military leadership, that led to Gallagher keeping his elite status as a Navy Seal. “The man got out of bounds. You can’t do that. And I hope a lot more veterans see that he is out of bounds. He’s out of control. And now he’s just wagging the dog to deflect all the problems that he’s got going on right now.”

Chambers is considering caucusing for Joe Biden because “he’s the only one that talked about national security. Our military structure is weak right now. There’s nothing there. And then our current president goes and tries to play the military by giving them a big pay raise.”

At the Davenport field office, Dr. Biden made two phone calls to supporters the campaign wanted to step up into leadership roles for caucus night. 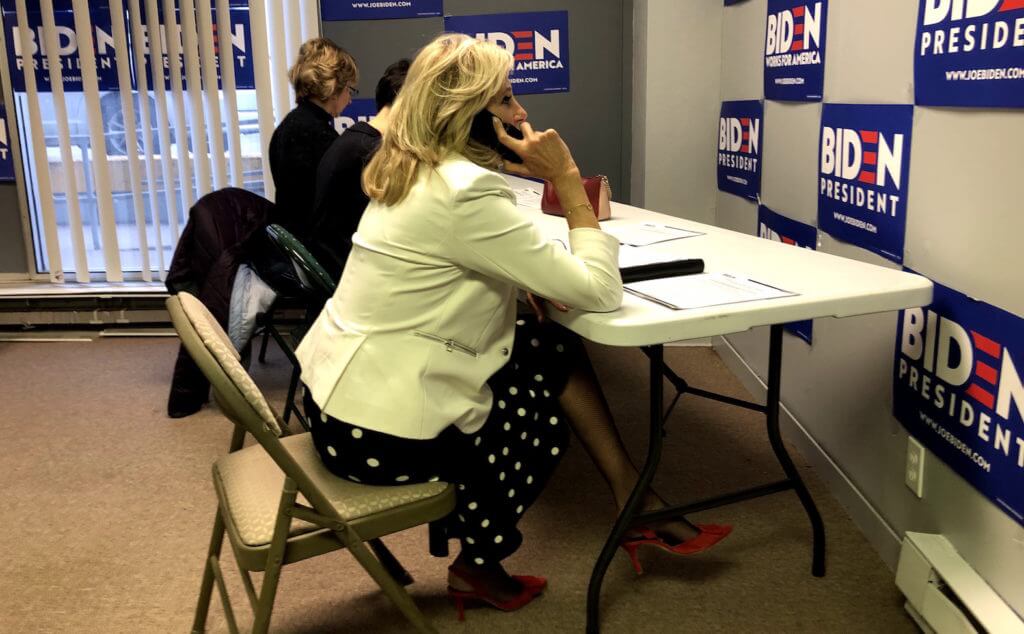 As she got on the phone with Wally Lechtenberg, of Bettendorf, she had to convince him it really was her on the other end of the line.

“It is Jill Biden, yeah!” she said, on the flip phone volunteers use to make calls.

“You know, Wally, I know you’re signed up to be on our team, but we want you to be a precinct captain,” Dr. Biden said, as two other volunteers worked the phones beside her.

In Muscatine, Bev Hull didn’t need to be convinced; she’s had her mind made up about Biden since August.

“He’s ready from day one,” Hull said, as she snacked on a cookie in the campaign office. “I’ve supported him before and I think he was a wonderful vice president. He was a great senator. He’s done so many good things in his life, and I think he’s honest.”

Hull said “most of my friends were still undecided,” but she supported Biden in part because of his plans to expand the Affordable Care Act.

“I think the things that he’s trying to do are things that are reachable goals,” Hull said, noting she saw Biden during his first presidential campaign in 1987. “They’re not pie-in-the-sky ideas.”