A second watchdog group announced today it filed a complaint with the Federal Election Commission in response to reporting about Sen. Joni Ernst’s ties to an Iowa-based “dark money” organization.

The nonprofit Campaign for Accountability (CfA) asked the FEC in a letter to investigate the campaign’s ties to Iowa Values, a 501 (c)(4) allegedly working with Ernst to help reelect her to the Senate.

On Dec. 9, the American Democracy Legal Fund also called for an investigation into Ernst’s campaign.

Campaign finance laws forbid political nonprofits like Iowa Values from directly coordinating with politicians or making advocacy for a candidate a central part of their operations.

“Federal campaign finance laws explicitly outlaw attempts by elected officials to circumvent disclosure laws by raising money for outside dark money groups,” said Daniel Stevens, executive director of the Campaign for Accountability, in a statement. “Sen. Ernst appears to have directed her campaign aides to run a shadow campaign operation through a nonprofit that doesn’t have to disclose its donors.”

CfA’s complaint comes in the wake of an Associated Press investigation that found Iowa Values has done more than simply raise money and push messaging favorable to Ernst. Documents, emails and a strategy memo “also show Ernst and her campaign worked in close concert with Iowa Values,” according to the AP.

As the Campaign for Accountability points out in its letter to the FEC, former Ernst aides created the political nonprofit. And in one instance, Ernst appeared to introduce a donor to Iowa Values’ fundraiser, who then reached out to the donor, referencing that introduction, to request $50,000.

“Illegal conduct is illegal regardless if anyone is watching,” said Stevens. “Sen. Ernst appears to have presided over a dark money operation designed to raise huge amounts of money from secret donors. Iowans should be concerned about who is funding Sen. Ernst’s campaign and why she is ignoring campaign finance laws.”

In its complaint, CfA references Facebook ads made by Iowa Values “that republish campaign materials prepared by Joni for Iowa” (Ernst’s campaign committee).

The Facebook Political Ad Archive show that all of Our Iowa Values’ Facebook ads in 2019 have been Ernst-themed, though their spending on those ads is relatively low for most serious digital ad campaigns. 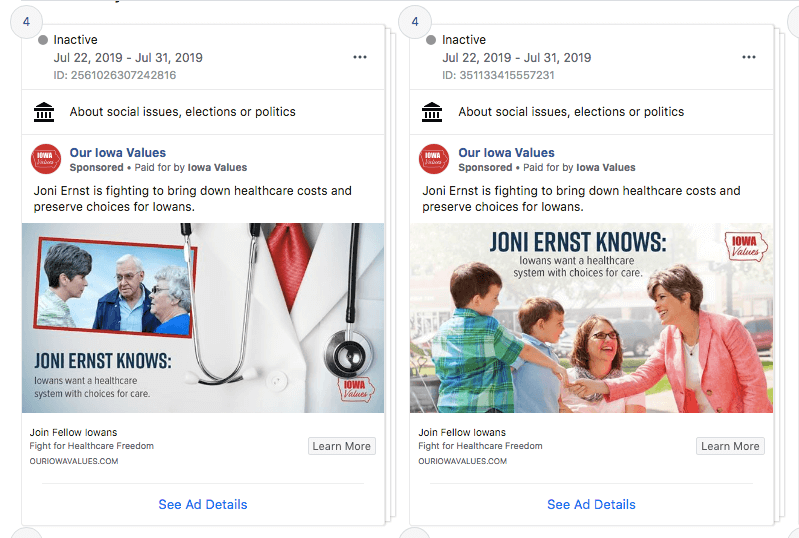 “According to Iowa Values’ own materials, it intends to spend funds in connection with Sen. Ernst’s re-election campaign in 2020 by ‘shoring up’ voters for Sen. Ernst, and targeting those voters that will represent ‘the difference between winning and losing’ her seat in the Senate,” the 19-page complaint states.

“Since the announcement of Sen. Ernst’s re-election campaign, Iowa Values’ public communications have been focused on promoting Sen. Ernst, often directly advocating on her behalf.”

Ernst’s current campaign finance woes are not the first time she has run into trouble with the FEC.

Last week, Starting Line reported on a $14,500 fine Ernst’s 2014 campaign paid to the FEC, the largest in history for an Iowa candidate.