The conservative energy non-profit that campaigned against President Barack Obama’s 2012 reelection is now set on targeting the Green New Deal and 2020 Democratic candidate Bernie Sanders’ advocacy for it.

In an advertisement released on Facebook and Instagram near the end of October, the American Energy Alliance made at least six buys of ads depicting the Vermont senator speaking to three scientists in white lab coats with tape over their mouths and text saying “The Debate is Over.”

According to Federal Election Commission filings, the conservative, largely Koch-funded group last spent money on an election in 2012, funding attack ads against political candidates using messages such as “stand with coal” and “vote no on Obama’s failing energy policy.” 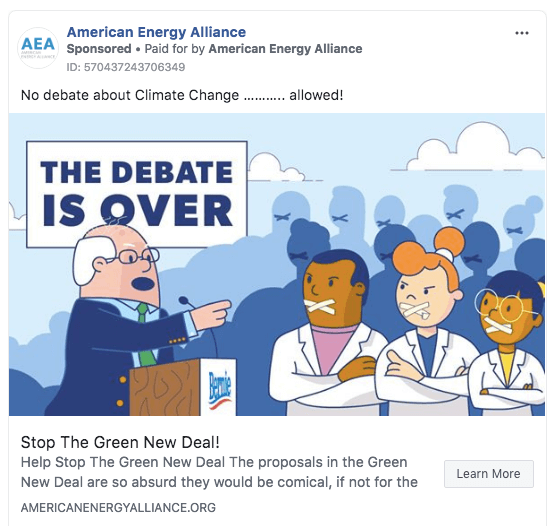 “The Koch brothers’ lies will not silence Iowans organizing to take on the fossil fuel industry and make Bernie Sanders’ Green New Deal a reality,” said Bernie 2020 Iowa State Director Misty Rebik. “Iowans have seen firsthand the impact of climate change and the scientific community has overwhelmingly declared that we must take immediate action to avert a climate catastrophe. Bernie Sanders is the climate candidate, and that’s exactly why we’ll win the caucus.”

The AEA calls itself a “not-for-profit organization that engages in grassroots public policy advocacy and debate concerning energy and environmental policies.” The group spent nearly $1.4 million on electioneering communications ads — with Obama as their subject — during the 2012 election cycle.

The active post is coupled with the caption, “No debate about Climate Change ……….. allowed!”

Since May 2018, the AEA has spent $68,363 on Facebook and Instagram ads that feature other campaigns against the GND. One includes a cartoon of a thermostat, coins and dollar bills saying, “You might think the Green New Deal is funny, but you won’t be laughing at your new energy bill.” The post then urges people to sign an AEA-created petition demanding lawmakers reject the deal.

“It looks like a pretty standard fossil fuel industry front group attacking clean energy,” Josh Mandelbaum, an attorney with the Environmental Law and Policy Center, said of the ads.

Tom Pyle is the former lobbyist for Koch Industries who runs the AEA and its parent organization, the Institute for Energy Research. Politico in 2012 reported that Pyle attends Koch-organized mega-donor summits regularly, including one in Indian Wells, California, where the Kochs raised more than $150 million ahead of the 2012 general election.

The candidate has been campaigning strongly in Iowa for the GND. In November, he hosted a climate summit with one of the deal’s lead sponsors, Congresswoman Alexandria Ocasio-Cortez, and last Friday stood with activists striking for climate in front of the Iowa Capitol in Des Moines.

“We’re looking not only in Iowa, not only in the Midwest, not only in America — we’re looking all over the world about a serious crisis in food production,” Sanders said in front of the Capitol building. “That’s the bad news. But here is the good news. If we have the courage to take on the fossil fuel industry and other special interests, if we have the courage to pass a Green New Deal, we can create up to 20 million good-paying jobs transforming our energy system.”