Sen. Bernie Sanders has his sights set on being the 2020 election’s “climate candidate,” and Green New Deal lead sponsor, Rep. Alexandria Ocasio-Cortez, is helping him get there.

After the Vermont Senator trailed behind competitors Sen. Elizabeth Warren and South Bend, Indiana Mayor Pete Buttigieg for voters who would choose a candidate based on climate in a Quinnipiac poll released Wednesday, Sanders was today boosted by a number of high-profile endorsers and surrogates at a Des Moines “climate crisis summit.”

“We understand, perhaps uniquely … that no president of the United States, not even the most honest and well-intentioned, can do it alone,” Sanders said around the third hour of the event. “What Alexandria was talking about, our campaign is about the need to build an unprecedented grassroots movement.”

The summit came a day after the candidate drew over 2,400 in Council Bluffs, which the Sanders campaign calls the largest crowd in the state so far in the 2020 cycle. Over 2,000 were in attendance at today’s event, which included a climate scientist-led presentation, a panel featuring artists and activists, speeches from international climate activist Naomi Klein and State Rep. Jeff Kurtz, before Sanders and Ocasio-Cortez spoke and engaged in a Q&A.

“Are we ready to talk about the Green New Deal?” Ocasio-Cortez asked the crowd after a long standing ovation. “2,400 people in Council Bluffs, last night. To talk about these issues.”

“If Bernie would bump it up in his agenda to the level that it needs to be addressed, which is an absolute crisis, I could see him getting there. He’s got good ideas about it, but it feels like he’s not prioritizing it in a way that he needs to, to be the climate candidate,” she said. Ed Fallon, a local talk show host from Des Moines, is also unsure that Sanders can take the spot, which he said was formerly occupied by Washington Gov. Jay Inslee. Although Inslee campaigned for president nearly entirely on a climate platform, Fallon said he is optimistic about the fact Sanders and his campaign put together a climate-focused summit.

“I’m not sure yet [if Sanders can take Inslee’s spot]. Jay Inslee was clearly the candidate who was most cognizant of how much danger we’re in, and no candidate has yet stepped in to fill that void. Maybe it will be Bernie, too early to tell, but this is encouraging,” Fallon said.

Under a Sanders administration, the candidate said, America will end tax breaks for the fossil fuel industry, meet the recommendations of climate scientists by moving to 100% renewable energy in electricity and transportation by 2030, and create 20 million good-paying jobs under the Green New Deal, which climate experts call more ambitious than Inslee’s plans.

“Bernie has put forth the most ambitious climate plan that we’ve seen,” said event panelist Zina Precht-Rodriguez, a leader for the Sunrise Movement, a youth-climate activism organization. Forrest Burgess, a 25-year-old student from Ames, appreciated Ocasio-Cortez’s endorsement and what it means for Sanders’ agenda.

“I think she really put a spotlight on [climate change]. Before the Green New Deal, there really was no comprehensive plan for people to coalesce around … I know she’s gotten a lot of flak for some of the details, but there’s finally a plan,” Burgess said.

Shannon Walker, a 48-year-old from Clarion who cleans houses for a living, said she’s seen Sanders four to five times, but came to today’s summit because of surrogates like Ocasio-Cortez and Naomi Klein. Walker is unsure of who she is caucusing for but said climate is one of her top issues this election.

“This is significant because they’re bringing a lot of voices to the table,” Walker said. “I’m here for AOC, and Naomi Klein is a big voice, I’ve seen her a few times.” 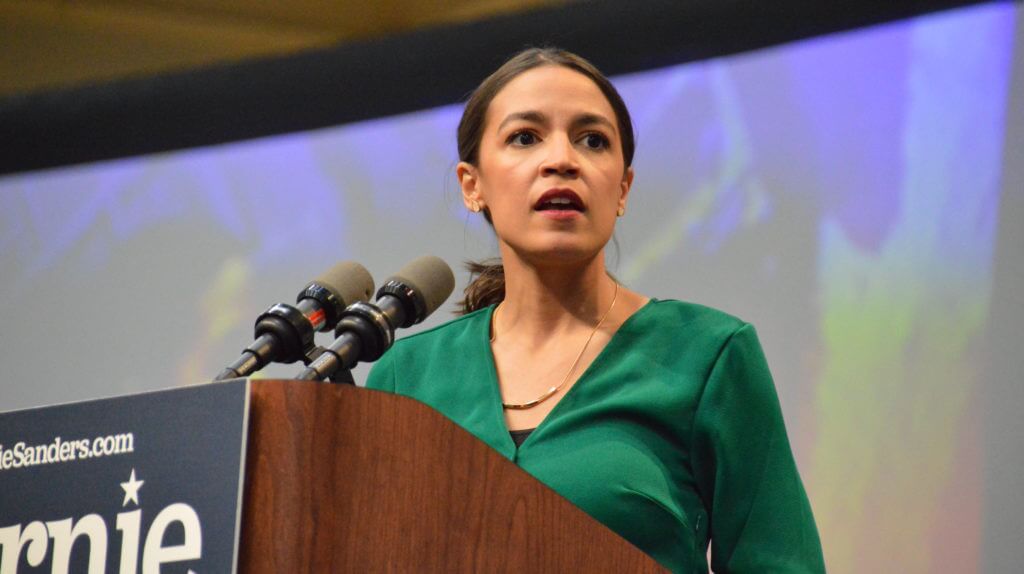 The event, which lasted over four hours, generated a number of standing ovations for the speakers and panelists.

“With this energy, we could win the caucus, we could send Bernie Sanders to the White House,” said Linn County Supervisor Stacey Walker.

“When we talk about fighting money in politics, what we’re talking about is fighting big oil,” said Ocasio-Cortez. “Do you really believe that if oil and gas were not some of the most profitable things in the world, we would be burning our planet to our destruction? That’s what fighting big money means.”