In Iowa, the voters are angry.

Even the really old ones, like 95-year-old Bud Guthrie, a World War II veteran who lives in rural Story County.

He’s so upset by Donald Trump, that Guthrie, a lifelong Republican, has now switched to being a lifelong Democrat, as he told Sen. Cory Booker in early November.

“As president, first thing I’d like for you to do is to kick his ass out of the White House and into the jail house,” Guthrie told Booker, who stopped by Guthrie’s son’s house to talk about renewable energy.

Booker chuckled nervously at the remark, which wasn’t exactly on-brand for Booker’s overarching message of love and unity. He quickly pivoted back to that message.

“I am looking forward to beating him,” Booker replied. “I think it is a national urgency that we return this country back to civility and decency and dignity. The republic deserves that. Forget party, we just need kindness coming from the White House.”

“Oh, yeah,” Guthrie nodded, then went on to urge Booker to do something about the national debt.

The rest of that stop, however, fit Booker’s brand of light-hearted, “joyful” campaigning. The host at the house is also known as Iowa’s “Carrot King,” and shared his renowned carrots with the vegan Booker. Amazingly, the pun-obsessed senator somehow refrained himself from making his “receding hare-line” joke. 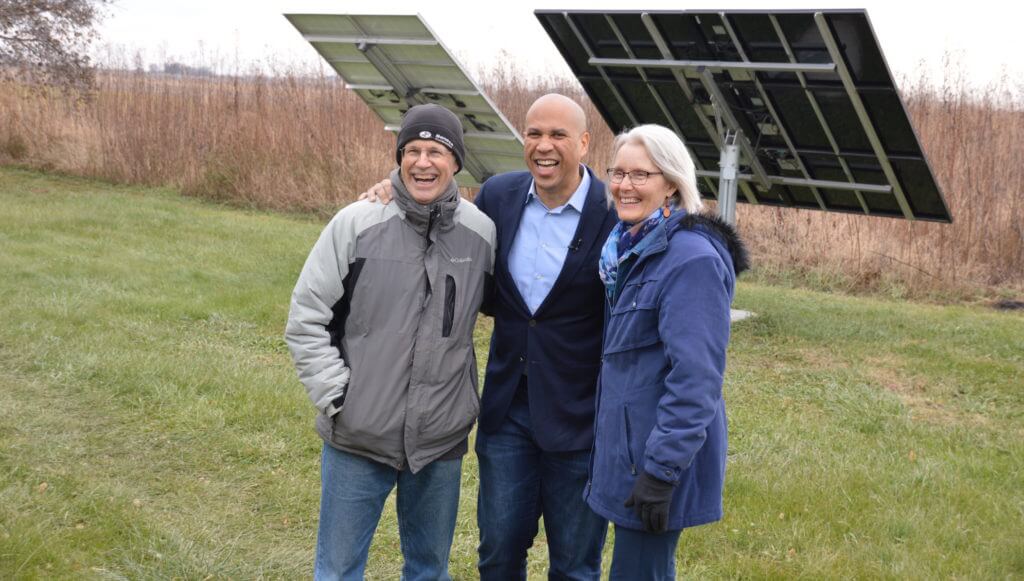 In Booker’s travels through Iowa, including a stop before Thanksgiving Day for service projects and another tour this upcoming weekend, his core message has never wavered. Only by uniting the country in a mission of love, Booker asserts, can Donald Trump be defeated and — more importantly — America can finally make legislative progress on any major issue.

So far, it’s produced limited success, though signs of a possible breakthrough always seem just around the corner.

“I’m Cory,” he introduced himself as to a woman crocheting on a couch outside his radio interview at an Ames station.

Stuck in the low-single digits in Iowa for most of the year, Booker still always polls well among Iowans who say they are actively considering him, they just don’t have him as their first choice yet.

Some political analysts have questioned whether Booker should change up his messaging approach at a time when Democrats are furious about Trump, something Booker and his campaign are adamantly opposed to.

But just as you can find amusing anecdotes about feisty World War II veterans, so too can you find Iowans who are fed up with being fed up, ones who are drawn to Booker’s message.

“I think he is most inspiring,” said Carol Kramer, a retired teacher and Native American from Newton, at Booker’s event later that same day in Ames. “The inclusion, the energy. I heard him a year ago at the Fall Gala … I went home and told my husband that he reminded me so much of Barack.”

And it’s not like that message of coming together is a nonstarter in Iowa. It seems to be working just fine for Pete Buttigieg. Last month’s Des Moines Register poll showed him not just leading the crowded Democratic field, but putting real distance between him and the other three front-runners. Buttigieg has been campaigning on a unity message in Iowa for much of the last month, contrasting himself explicitly with Elizabeth Warren.

The issue for Booker is just that it hasn’t caught on for him specifically yet. But he sees it working, little bit by bit, at his campaign events here.

“They’re telling us they want a leader who can unite people,” Booker said of what he hears from Iowans, in an interview with Starting Line. “That’s where our strength comes from … I think that theme is the winning theme. It’s not only going to be able to win the White House, it’s going to help us make bigger change, as well.”

And now that message will be getting a wider reach for Booker. Today, his campaign announced a six-figure digital buy of their first ad, titled, appropriately enough, “Love.”

The goal is to demonstrate that Booker’s approach is the winning one in taking on Trump, that it’s not just the confrontational, punch-for-punch strategy some of his Democratic opponents are running on that can work.

Another African-American senator rode a message of unity in the primary back in 2008. At that time, the Democratic electorate in Iowa was plenty angry after seven years of George W. Bush, but they were also exhausted, looking forward to what the post-Bush years in D.C. could look like. Barack Obama’s hopeful vision of a less-partisan America that got things done was alluring (even if it didn’t quite come to pass).

This time, Democrats know they first have to defeat an incumbent that has already upended political norms and expectations. Ask a lot of Democrats out at caucus events, they’ll tell you they’re looking for someone “tough” enough to beat Trump.

Booker argues you need someone coming at him with a completely different, almost asymmetrical warfare approach to put Trump on his heels.

“Trust me, I’m going to do jujitsu to Donald Trump when he tries to insult me, wait til I’m your nominee,” Booker said in Ames after relating one of his favorite stories, how he got in a national social media battle with Conan O’Brien over Newark’s image.

It’s something Iowans seem plenty open to, as evidenced by Booker’s still-in-it-sized crowds he draws.

“Oh, wow,” Booker exclaimed as he walked into his 200-plus person event in Ames in early November, one at which his team sealed the deal with several key activists they’d been pursuing for months. His Iowa operation rolled out another long list of endorsers last week, a sign of a campaign still in the mix. 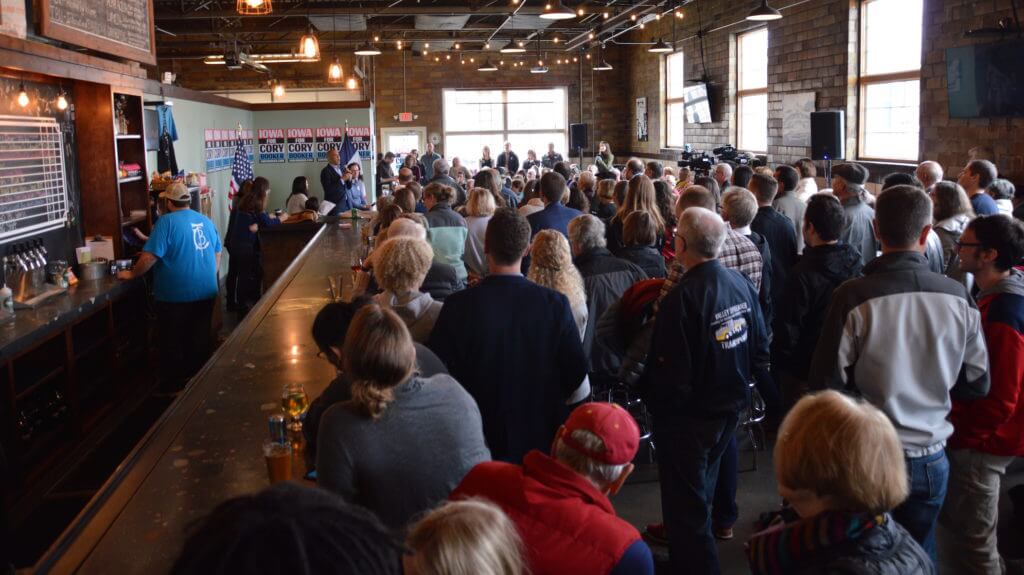 “I came in here with maybe a top four or five, pretty undecided, but I’m very much leaning toward him,” said Martha Selby, 60, of Ames, a faculty member at ISU after his event. “I really like his message of it’s not just about beating Donald Trump. Who could win? Who could beat him? … I am not going to analyze that. I am going to pick a person who I think is best.”

And Booker is well-positioned in several ways for the final stretch in Iowa. For one, he’s been the most congenial of the candidates, rarely making critiques of his competitors (when he has with Joe Biden in debates, it’s usually been prefaced with a joke to take the edge off).

With Buttigieg showing no sign of slowing down in Iowa, we’re likely just a few weeks away from someone — maybe almost everyone? — going nuclear on the Iowa front-runner in TV ads. As we’ve seen in past cycles (most notably the 2004 caucus), that can hurt both the attackee and the attacked.

If the race gets sufficiently nasty, worrying Democrats again of a divided party heading into the general, Booker can point to himself as the potential uniter.

“I think a lot of us are still hurting from the last election where we didn’t have the unity we needed to prevent Donald Trump from becoming president,” Booker told Starting Line. “That’s one of the things I was determined when I got into this race that I wasn’t going to allow … The way we address this is not another president that divides us deeper along party lines. The president we need right now is one who can call us together across those lines that divide us.”

Meanwhile, Booker has positioned himself to compete for the same sort of mainstream progressive voter — not Bernie Sanders’ far-left support, not Biden’s older, loyal, moderate support — that has been so in-flux this year. Those kinds of Iowans have fueled both Buttigieg’s and Warren’s rise, and they make up the bulk of those who still haven’t made up their mind in most polling.

“It’s relevant that Senator Booker made a correct observation that we can’t even get all ten candidates to agree on Medicare for All,” Ralph Rosenburg, of Ames, commented after seeing the candidate. “If we can’t get all ten to agree, how are we going to get Democrats like Senator Manchin to agree, let alone the Republican Senate? I think he did it well without criticizing the candidates who are for Medicare for All. He did it in a civilized way, which is what he’s talking about.”

Booker is on the record supporting Medicare for All, but has emphasized that he’ll first work on a “pragmatic” option that quickly gets more health care coverage to more people. That middle ground seems to be resonating better with Iowans after Medicare for All got more pushback this fall.

And if he starts to move up in polling, Booker’s play-nice strategy should pay dividends on caucus night. One recent poll showed him with a net +42 favorability rating, third in the field, behind only Buttigieg and Warren. Where Booker is viable, he should be able to rack up delegates with second-choice caucus-goers.

But he still needs two things, which largely conflict with each other, to get traction in Iowa: time on the ground and stronger fundraising to run ads. Both are crucial to picking up some polls where he’s at 4% or more to get into the December debate, which he hasn’t qualified for yet.

“I feel enthused when we have town halls like that,” Booker said of his Ames event. “If I could be here this whole time, I think we’d be having even more momentum right now. The challenge for us, this next month is all about fundraising.”

Booker said that making the next debate wasn’t “do-or-die,” but that he obviously wants to be there. He apparently raised enough to push out digital ads (though notably not TV ones yet). The rest will depend on whether he can find that ever-elusive “moment” that puts him back into real contention as the Iowa Caucus quickly approaches.