Today, the Senate Judiciary Committee voted to advance the nomination of Steven Menashi to the Second Circuit Court of Appeals, despite multiple red flags he’s raised.

Sen. Joni Ernst was one of the senators to vote for him.

Menashi made it through the committee on a party-line 12-10 vote that was finally taken after being pushed back twice, presumably because he didn’t have a majority of the vote until now.

Ernst didn’t speak before the vote, but she did say “aye” when called on.

Because of that vote, Demand Justice, a progressive judicial reform advocacy group, will begin running ads in Iowa calling her out for the vote.

Christopher Kang, the chief counsel for the group, said, “Americans deserve to know if a man seeking a lifetime appointment as a judge was an accessory to one of the greatest abuse of power scandals in American history.”

These are the versions of the ads they plan on running: 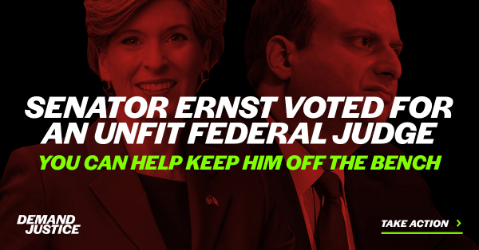 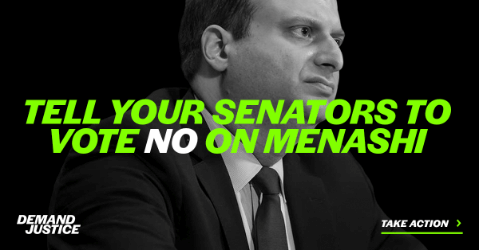 This is a reference to his position in the White House Counsel, advising the administration on legal matters. After news of Donald Trump conditioning military aid on the Ukrainian government investigating his political rival, former vice president Joe Biden, Menashi refused to answer questions about whether he was involved with the phone call.

“Steven Menashi isn’t even answering basic questions about his role in the Ukraine scandal, but that didn’t stop Ernst from supporting his nomination. Iowans deserve better,” Kang said.

More information about Menashi and his record was revealed today.

The New York Times obtained information Menashi has refused to give to the Judiciary Committee on his work advising Secretary of Education Betsy DeVos.

The Times reported Menashi helped brainstorm an illegal effort to use Social Security data to deny debt relief to students who were victims of for-profit colleges. A federal judge ruled that it violated federal privacy laws and ordered the end of the practice.

Menashi worked as general counsel under Sec. DeVos at the time. During his hearing in September, he refused to answer specific questions from both Democrats and Republicans about his time and work there.

He served the same role when DeVos rolled back Title IX protections for survivors of sexual assault.

And that wasn’t the only area of his professional life he was evasive about.

As reported earlier this year, Menashi also refused to answer questions about his writings from college that seemed to undermine the severity of rape and sexual assault on college campuses, and compared the college application process to Nazi Germany’s Nuremberg Laws because race was listed on the application.

There are also concerns about his writings about LGBTQ Americans.

Menashi also refused to answer specific questions from the Senators about whether he had a role in the White House policy of separating migrant children form their parents.

He only said he gave advice on a variety of questions, including immigration, but he wouldn’t go into specifics.

This morning, Sen. Mazie Hirono quoted Sen. Kennedy’s comment while explaining why she would vote against Menashi.

Overwhelmingly, Republicans on the committee who spoke before the vote said they didn’t like Menashi’s refusal to answer questions during his hearing, but that wasn’t enough to make them vote against him.

“Final point I’ll make is I didn’t like the fact that the nominee wouldn’t straight up answer questions. I agree with Sen. Feinstein, I didn’t like it at all, and I made my concerns known to White House Counsel,” Kennedy said today. “And I hope it gets better, but I’ve spent a lot of time on this and I’m gonna vote for his nomination because I think his reasons are carefully, carefully articulated.”

He said disagreement on points of view isn’t enough to disqualify a nominee as long as the nominee came to that conclusion reasonably. Kennedy also suggested that Democrats on the committee would be willing to vote for a nominee who had radical views, as long as those views were liberal.

Kennedy also said he’d have to assume that nominees are being honest when they say they’ll put personal feelings aside when on the bench.

Much about Menashi’s nomination is concerning to national groups, but even Iowans have gotten involved.

Over 70 students from Iowa Law wrote a letter urging Ernst to vote against the nomination in late October, citing his refusal to answer questions and his record as evidence he didn’t belong on a federal court.

“The federal judiciary is supposed to be impartial, and apolitical. Such a political actor has no role on the bench,” the students wrote.