Harold Schaitberger is the international president of a 320,000-person union and leads the ninth-largest federal union PAC in the United States, but he has one thing on his mind come caucus night: where to put the Joe Biden posters so voters can easily see them as they walk in.

An old caucus pro himself, Schaitberger knows all the little details that make for a successful caucus campaign, and one thing he’ll have precinct captains tasked with is securing “the ideal space at the caucus locations” for Biden’s backers.

“You go in and go to the registration table and walk through the door and into the auditorium and we understand, you know — where’s the line of sight? And how do you secure a good location?” Schaitberger told Starting Line in an interview before last Friday’s Liberty and Justice Dinner.

This is far from Schaitberger’s first rodeo in Iowa. He’s often spent the last month in the state before past caucuses helping out the firefighter’s endorsed candidate, including John Kerry in 2003/2004. You’ll see him in the state this January, likely surrounded by yellow-clad firefighters, to knock doors for Biden and talk with fellow union members.

The firefighters made their presence known at the LJ Dinner, contributing to Biden’s second-loudest reception of the evening. Posted up in a special section in the crowd, firefighters from around Iowa and beyond arrived to give Biden an extra boost in the big arena. 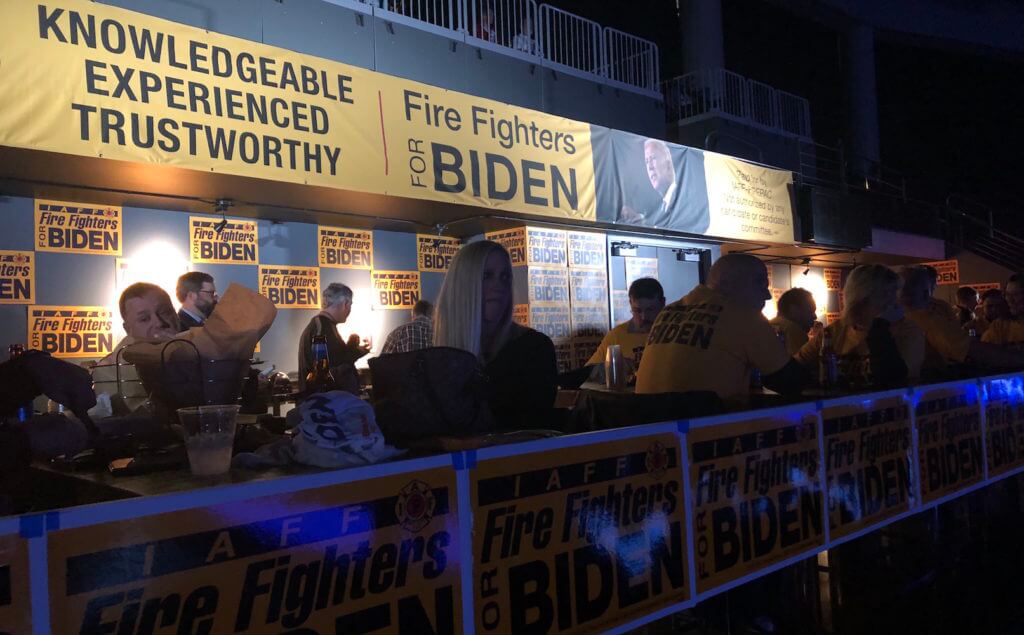 In Iowa, nearly 40 local affiliates of the IAFF represent more than 1,600 career firefighters.

The IAFF was the first of the nation’s largest unions to endorse a 2020 Democratic presidential candidate earlier this year. For Schaitberger, it wasn’t a hard decision to make.

“We had made our decision back in the fall of 2015 when we were pushing, encouraging and hoping that Joe would enter into the Democratic primary for the 2016 election,” Shcaitberger said. “He has been with us every step of the way for over 40 years. He has supported our profession, he has supported our union rights, he has been there in troubled times when we lose members to the line of duty.”

One week years ago in Delaware, Schaitberger said, three firefighters were killed on the job. Biden showed up, but it wasn’t just for the funerals and wakes.

The former vice president ensured the public safety officers’ death benefit program was handed out expeditiously and made sure families received the support he helped pass into law in 1976.

Schaitberger recalled another incident, this time in Prescott, Arizona, when 19 firefighters were killed in a wildfire. Biden visited and made sure the families were cared for and financial assistance was streamlined.

“It’s really been more than just a distant political support,” Schaitberger said, about Biden’s relationship with the firefighters. “It has really been an intimate relationship he’s had with our profession and our members for decades.”

Schaitberger said firefighters will “bring everything to the arena we can, legally and certainly within the federal election commission rules.”

He supposed the most important thing they bring to the table is the union’s membership.

“We like to say we are in every place where there’s a blinking light,” Schaitberger said. “We have a standing within a community where we are part of the fabric of the community … firefighters are out in the streets raising money for MDA [Muscular Dystrophy Association], filling the boots and they’re building the ramps for the handicapped and disabled that can’t afford it … They are engaged in community.”

In Iowa, that kind of community leadership should be particularly helpful on caucus night, where neighbors try to convince each other to come to their corner of the room for a candidate.

This past Saturday, Schaitberger said he was hosting a meeting with leadership in Des Moines to put in place a strategic plan to get IAFF members, their families and friends to show up to caucus in February.

They’ll also train firefighters so they understand how the caucuses work. They’ll learn about viability rules and how to pull undecided voters into their corner and how to engage first-time voters in the process.

“We have a very strong statewide leadership and we have great local leadership, and we will use all of that to kind of magnify what looks like raw numbers,” Schaitberger said. “But, we have a much further reach than just Iowa.”

2 Comments on "Firefighters Draw On Caucus Experience To Boost Biden"