Everyone who was in Wells Fargo Arena for the Iowa Democratic Party’s Liberty and Justice Dinner last night can agree – it was loud.

But how loud was it?

In an effort to measure the degree of cheers and jeers of the night, I spent five hours looking at a decibel meter to find out who had the loudest reception of the evening. The result was unexpected, nuanced, and filled with lessons that could be useful to campaigns and candidates in the future.

Here are three takeaways from the applause-o-meter experiment:

The Earlier, The Louder

At 6:30 PM, Wells Fargo Arena was filled with 13,000 Democratic activists, politicians, staffers and voters. Needless to say, the crowd was fired up to hear from the 13 Democratic presidential candidates to take the stage throughout the evening.

During the opening speeches from Iowa Democratic Party Chairman Troy Price and Democratic National Committee Chairman Tom Perez, the noise level in the crowd was comparable to the sound of a subway train (100-105dB). As the evening wore on, the noise dwindled down as did the crowd.

It’s certainly not the case that the popular State Auditor lost supporters in that two-hour span, but that there were simply fewer people there to cheer him on at that point in time.

In possibly the most shocking revelation of this experiment, it turns out that the noise-making devices that are often used by campaign supporters don’t technically make all that much noise. While this may be hard to believe, it makes a bit of sense upon further examination.

The most popular noise-making device in this arena was the thunderstick. The thunderstick undeniably produces a constant level of sound, but it is more of a base-level rumble than a roaring ovation.

Candidates such as Mayor Pete Buttigieg benefitted from this rumble when loud vocal cheers were placed on top, creating a well-rounded and considerable level of sound. Of course, the Mayor also benefitted from speaking to a full arena. At its loudest, the crowd reached 108dB during his speech – the highest of the night.

While Senator Elizabeth Warren’s supporters also made use of the thundersticks, there was not as much vocal noise to bring up the overall sound level. The energy in the Warren camp was undeniable, but the sound only reached 100dB because of this seemingly unknown variable. Senator Harris’ overall sound level was arguably impacted in the same way.

But why doesn’t raucous thunderstick beating produce more sound? Well, this is where it gets a bit technical. The sound that these devices make is at a low frequency, creating that base-level rumble. A higher frequency sound, such as cheers and claps, registers higher when measured in decibels. When combined, it’s quite a force to be reckoned with. 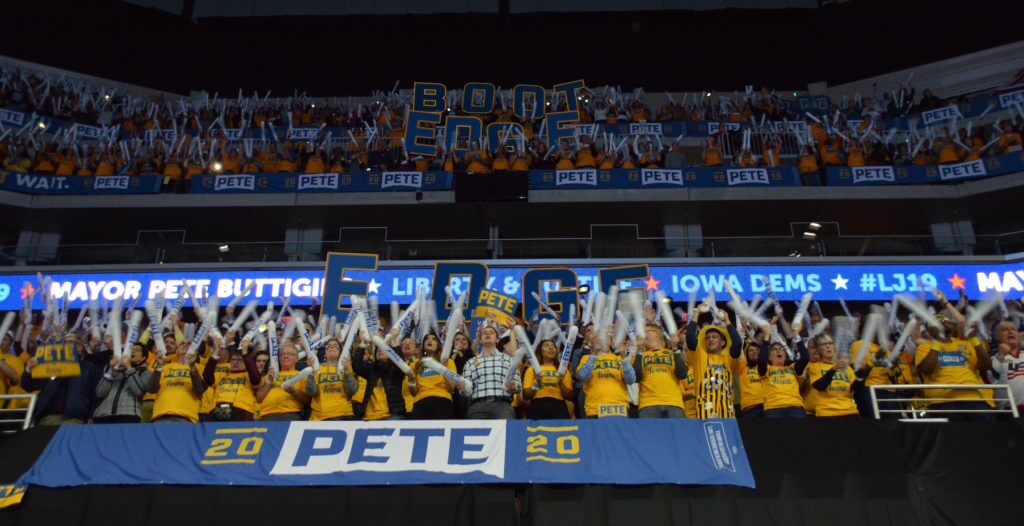 When In Doubt, Give A Shoutout

For the lower-polling candidates with fewer supporters in the arena and those who were scheduled in the second half of the program, another tactic was used to garner applause from the crowd. Tom Steyer, Secretary Julián Castro, and former Congressman John Delaney garnered crowd support from deploying some classic Iowa lines.

Congressman Delaney touted his visits to all 99 counties in the state (78dB), Secretary Castro gave a general shoutout to the Iowa Democratic Party (90 dB), and Mr. Steyer pointed out that the event would likely be the largest gathering of Democrats until the 2020 Democratic Nominating Convention in Milwaukee (96 dB).

Simply put, you can’t go wrong with playing to the home team.

Keeping these many variables in mind, I present to you the decibel count of the 2019 IDP Liberty and Justice Celebration. Candidates are listed in order of appearance with their highest level of applause, excluding their musical walk-ons and walk-offs:

2 Comments on "Which Candidate Had The Loudest Reception At The LJ Dinner?"