The 50-some staffers of Cory Booker’s Iowa Caucus operation turned into 50-some finance assistants this past week as their campaign fights to survive in the primary. In addition to their usual field duties, the Iowa staff have hit the phones and their own personal networks to cobble together every dime they can before the end of September.

Booker set a public, self-imposed goal of raising $1.7 million in the final ten days of this fundraising quarter. If he fails to meet it, the New Jersey senator will drop out of the race. If they pull it off, Booker sticks around to fight another day — and a lot of his campaign staffers will get tattoos.

While Booker’s campaign manager gives regular public updates on the campaign’s progress, Iowa staffers have taken to the phones and social media to help boost the numbers. Many of Booker’s Iowa staff are upping the ante by committing to get various tattoos if they hit their own personal goals, ranging from $81 to $30,000.

One Des Moines field organizer already got a tattoo of Booker’s signature on her arm. Several more organizers are getting theirs done together this weekend. If the Iowa staff raise $30,000 or more in total, state director Mike Frosolone will get a “We Rise” one, as well.

“I can’t say I’m surprised by how our team shifted gears and went hard at this goal, but I have been absolutely blown away by the energy and the response,” Frosolone told Starting Line. “Our organizers know Cory better than most, and they know how important it is to keep his voice in this race. Don’t sleep on this team. When I entered the tattoo challenge, I thought I set a pretty tough fundraising goal for them. Turns out, they’re more than two-thirds of the way there with three days to go, and I’m well on my way to getting a tattoo.”

And the Iowans that Booker’s team has built relationships with are lending a hand to the effort.

State Auditor Rob Sand, the only of the three statewide Democratic elected official who hasn’t endorsed in the 2020 primary, has used his sizable social media platform this week to encourage people to donate to Booker.

Cory Booker literally ran into a burning building to save a woman’s life when he was mayor. That’s someone whose voice needs to stay in this race. Contribute here: https://t.co/nnLt6rLJoX https://t.co/uky1oSvobT

J.D. Scholten, the Democrat running against Steve King, cited Booker’s work on anti-trust laws with the agriculture industry in the Senate when making a pitch online for Booker.

Others, like the chair of the Marshall County Democrats, have made direct appeals:

This is not an endorsement, but a statement that Cory Booker's presence is an asset to this race. Plus I like @ClassPrezz & want to keep her around & make her get a tattoo. Help Team Cory Stay in the Race https://t.co/3ieZ7V7S9W

And even some staffers for other campaigns have donated to one of their opponents. Norm Sterzenbach, the state director for Beto O’Rourke’s Iowa campaign, gave some money to help keep Booker in the race. 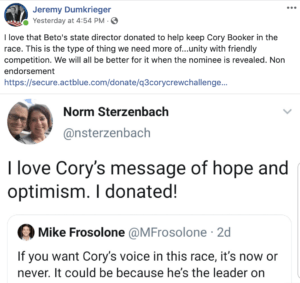 Former Kirsten Gillibrand state director Lara Henderson did as well, and Gillibrand herself jumped on a Booker staff conference call earlier this week.

While Booker has struggled to gain traction in most polls’ top-lines, he continues to do quite well under the surface. The Des Moines Register’s recent poll showed Booker only getting 3% of Iowa caucus-goers’ first-choice picks, but he had 42% actively considering or backing him. That was better than all but five of the Democrats in the field. His favorability ratings are typically rather high, as well, showing that he has the potential to quickly move up in places like Iowa if he gets some sort of spark in a debate on or at a major event.

That all depends, of course, if he’s still in the race after this coming Monday. This morning, Booker’s campaign said they had raised $1,269,551.59 of their $1.7 million goal.