Johnny Lynn and Randy Williams parked their burgundy pickup truck behind a barricade last Friday, which sat in front of their property just off of Interstate 29 — a home and farm three feet deep in floodwaters.

In one direction was the Missouri River, out of its banks for the third time this year. In the other, the Loess Hills, the small line of elevation in Western Iowa that the couple has had to retreat to time and again.

A retired teacher, Johnny Lynn had paint on her knees and elbows from working on the couple’s newly purchased Crescent, Iowa home earlier in the day. It’s just a few miles from their farm on a small hill in town.

The couple bought their new house because they were tired of dealing with the devastation floods have on their farmland.

“Everyone is just exhausted. And we haven’t gotten any type of compensation. They’ve just taken the value out of our house,” her husband Randy, a recently retired farmer, said.

“I don’t know how I’ll ever sell that house out there.” 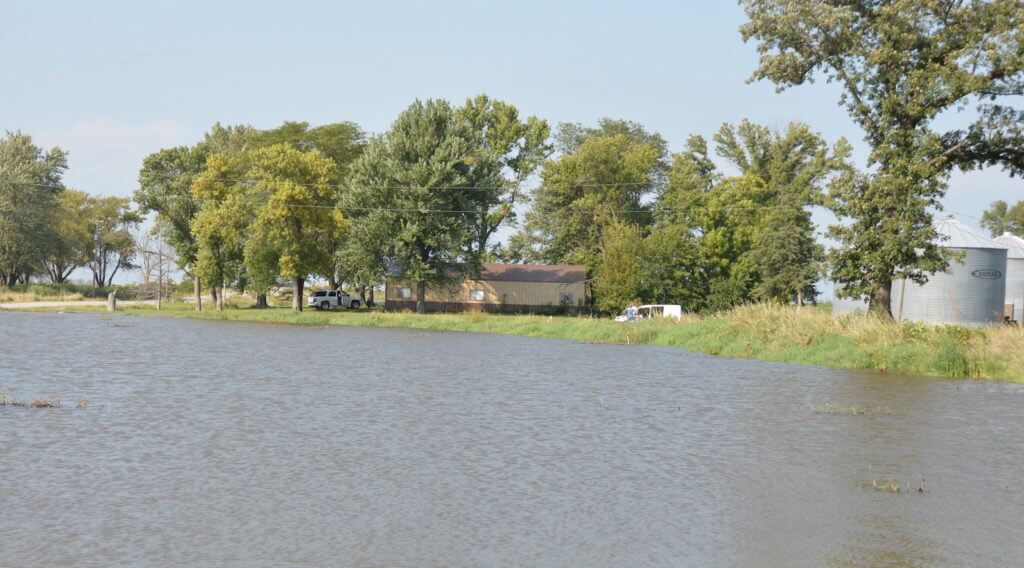 The Missouri River that runs along Pottawattamie County’s western edge crested near 30 feet last Friday, with road closures and the ruin of crops and some homes. The Williams are just one of many of the area’s families who have had to adapt to the year’s third round of major flooding.

But this isn’t the first year that floodwaters destroyed the Williams’ farm. In 2011, waters flooded their basement and fields — when Randy was still working as a farmer. The couple suffered about $30,000 in home destruction and lost all of their crops.

The furnace and water heater, among other things, had to be replaced in their finished basement.

“Our basement was finished, and people had wings, I swear, on their backs and came to help us haul stuff out,” he said.

The couple did not have flood insurance in 2011, but FEMA offered a little bit of money after the disaster under the condition they’d carry flood insurance from that point forward.

Williams said they had less time to prepare for this March’s flooding, so they thought their flood insurance might come in handy.

“This year we only had a few days’ notice. We thought, maybe it won’t get that high — but nobody could come out there to help us because all the roads were closed. So we didn’t get a whole lot,” Randy said.

The couple then made a claim. But after an adjuster came out to see the house, the Williams were told that basements really aren’t covered under the flood insurance.

“But they were happy to take our premiums all those years,” Randy said. “It’s those little digs. A little more salt in the wound.”

After the March floods, the couple and their two cats spent a week in a hotel after renting out their in-law’s property by the month. Everywhere else they looked required a year-long lease, Randy said.

The Williams moved back into their house off of the Interstate-29 Honey Creek exit in May, thinking the flooding was over. But when the year’s second round of flooding hit, the couple vacated their home again.

“The water came up again so we had to leave. So we took the new furnace back out and hauled it back upstairs and left,” he said.

The couple then purchased a traveling trailer and set up camp at Hitchcock Nature Center, staying for about six weeks while they looked to purchase a new house—they said they were too exhausted to live in their home again, in fear of another round of flooding.

Five minutes from the Williams’ new home down the Mormon Bridge Road, a lengthy county road off of Interstate-29, Mary Anne Kuhr and her husband Steve Hultman looked out over a landing at the Hitchcock Nature Center. 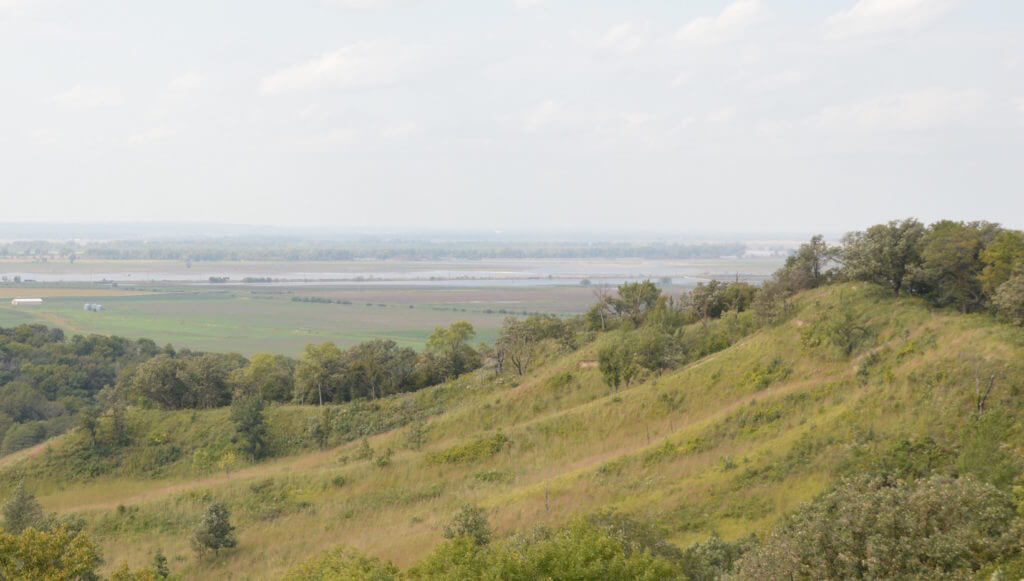 When Interstate-29 is closed, as parts of it were this week, Mormon Bridge Road sees bumper-to-bumper traffic during rush hour. Last week, the usually sparse road was full again after work hours.

Kuhr and Hultman met at Hitchcock decades ago when the property was a YMCA camp. Hultman oversaw the campgrounds while Kuhr taught art. The couple then got married on the grounds and lived their first home on the property.

“We never used to see water out there,” Hultman said, pointing to the landscape — filled with countless numbers of inflood. “There’s the interstate over there, and a lake on either side.”

“When we lived up here, that would have all been fields, turning gold just about now,” Kuhr added. “The climate is seriously changing and we have to adapt.”

Some of the root causes of the year’s flooding was more rainfall and heavy snow melts, said the Iowa Policy Project, due to climate change. Since 1991, annual precipitation in the Midwest has increased, according to the Fourth National Climate Assessment, in addition to more intense rainstorms.

Kuhr, a community activist, and Hultman, a member of the citizen’s climate lobby, said they’re among the rural area’s few Democrats. Their neighbors, they said, don’t always acknowledge the flooding’s link to climate change.

“Our neighbors take it one day at a time,” Hultman said. “They say ‘we’ve adapted before, so we’ll adapt again.’ Some of the people near here tend to be so socked into their belief systems that they make up odd reasons or conspiracies to justify the foods.” 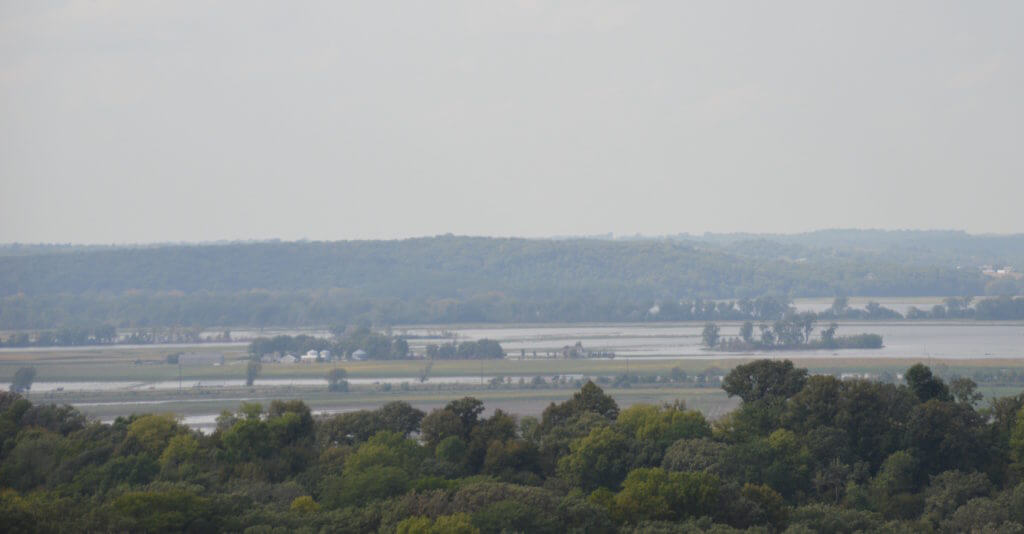 Many of the town’s residents blame flooding on the Army Corps Of Engineers — for the way it manages the Missouri River and for how it makes towns scale back levees.

“Some people blame the Corps, but the states along the river made the rules,” Kuhr said. “If mother nature followed the rulebook, we wouldn’t have to worry, but she has plans of her own.”

Hultman said part of his role in the climate lobby is trying to change public opinion about the issue.

“Look out here and see all of this water, the land is feeling pressure to adapt to the changes in weather,” he said. “We have to work together.”

For the Williams, the flooding has significantly altered their retirement plans. The couple had plans to stay in their home until the age they thought it might be easier to live in town.

“This intermediate house is not in the plan. It’s a nice house, but it’s not in our plan,” Johnny Lynn said.

This spring, the couple had sold one of their farms to create a larger retirement fund, so the extra money happened to come in handy when they had to buy the second house.

Randy said he hopes that next year, the farm ground will settle back down and they’ll be able to grow a crop—and maybe sell the house.

It’s a nice house, said Johnny Lynn, and the couple had just gotten it the way they wanted.

“We just had two bathrooms remodeled a year and a half ago. They were like my dream bathrooms, with pretty tile,” she said. “It’s just sad.”