The Steak Fry is underway. Your Starting Line team was spread out across the candidates’ rally sites. Here’s what was happening early on today.

“Mayor Pete, he’s our guy, welcome to the Steak Fry!” Supporters screamed as car upon car made it through the event’s gates.

Jazz music floated throughout Butigeg’s large stake fry lot. The mayor’s team bought two campsites for the event, and as the morning progressed, it quickly began to fill up with his large Iowan staff and supporters. 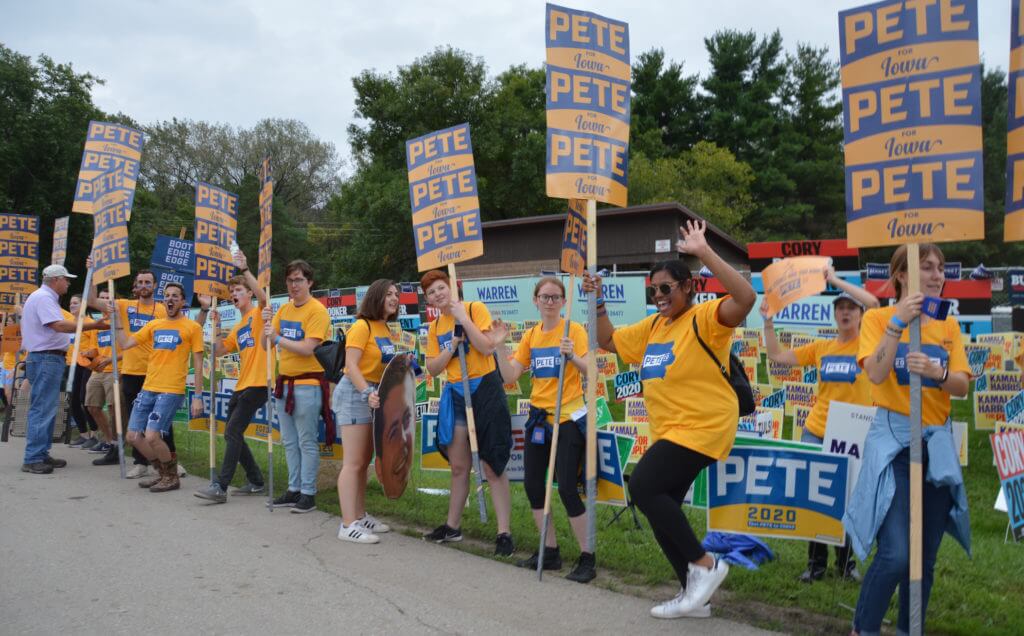 Buttigieg’s team said they had bought 1,500 tickets for the event, and a lot of his supporters had already purchased their own, so a large crowd was expected.

Decorations included construction risers floating 15 feet in the air doting ‘Pete 2020’ signs, a blue and yellow balloon arch that kept falling apart because of the wind, and tents with free t-shirts and refreshments. 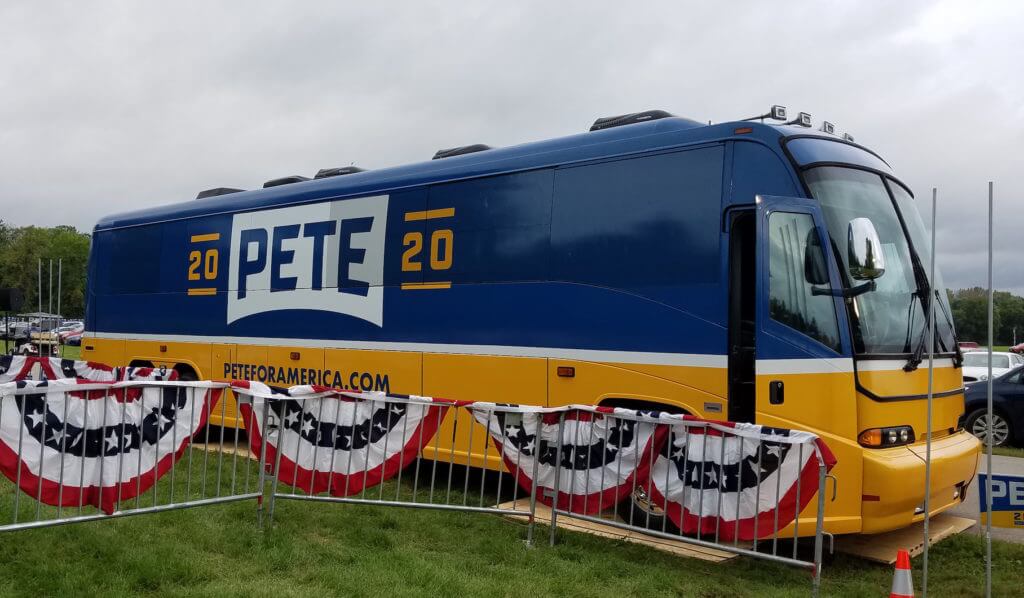 Several sets of ‘bags’ were set out for people to play throughout the day.

The jazz came from a five-piece band—including a saxophone and a bass– set up next to a large, shining ‘Pete 2020’ bus, ready to take the mayor on a tour of Iowan counties after the fry.

The Harris team got a good spot by the entrance, and they had it surrounded from the very beginning, cheering at passing cars already at 7:45 a.m. Two rows on either side of the road chanted and sang along to music by artists like Beyonce, Cyndi Lauper, Miley Cyrus and Whitney Houston. 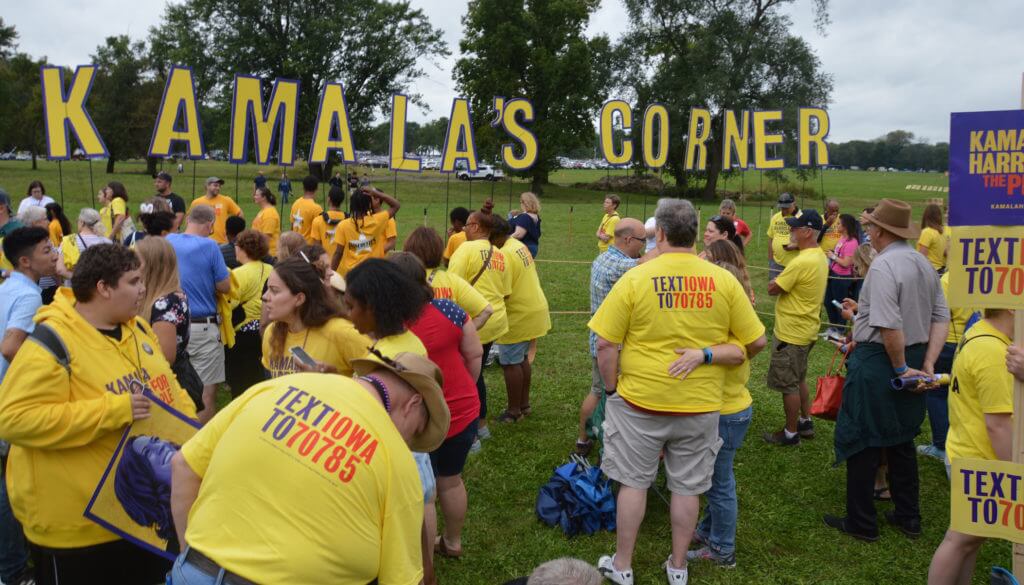 Their sign line also featured Kamala Harris cardboard cutouts (including one bedazzled like a jacket Harris once wore) and someone in a steak costume and another person in a French fry costume — shoutouts to the Steak Fry.

The volunteers worked hard to draw honks from the passing cars, and they cheered extra loud when they spotted yellow shirts or signs in the cars. To the willing, supporters even handed out miniature cutouts of Harris’s face on popsicle sticks. 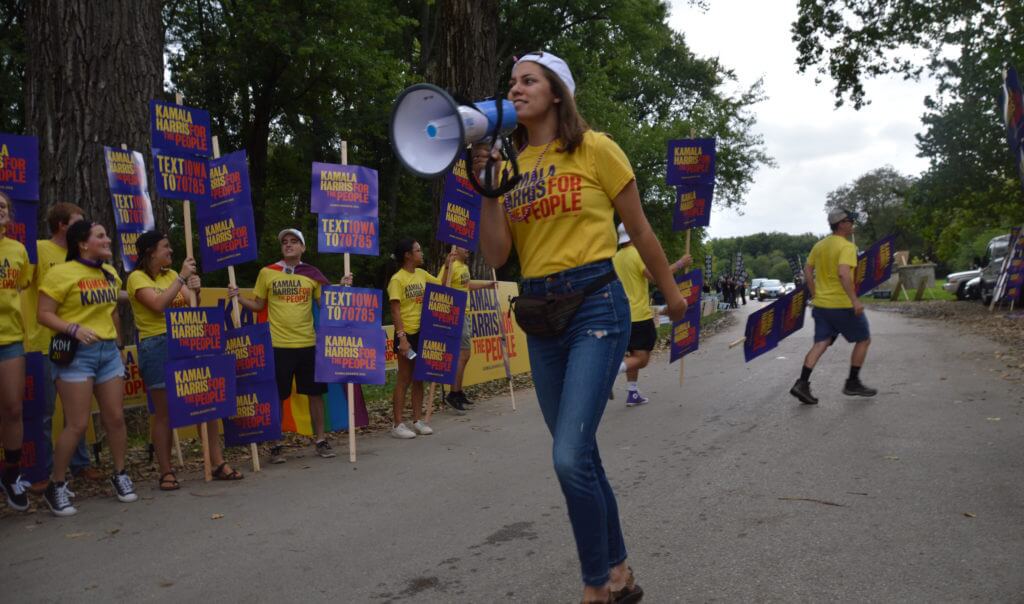 Their whole time along the street, Harris supporters kept up the energy, posed for pictures and cheered for their candidate.

At her rally site, supporters listened to more of Harris’ signature mix of hip-hop, R&B and pop music, put up letters that spelled out “Kamala’s Corner” and waited for the candidate to arrive and address supporters before marching in.

Harris was set to march into the event with a group of striking McDonalds workers and supporters who are calling for a $15/hour minimum wage. She also had the help of the Isiserettes, the famous Des Moines marching band that has often led Democratic candidates into events like these in past years. 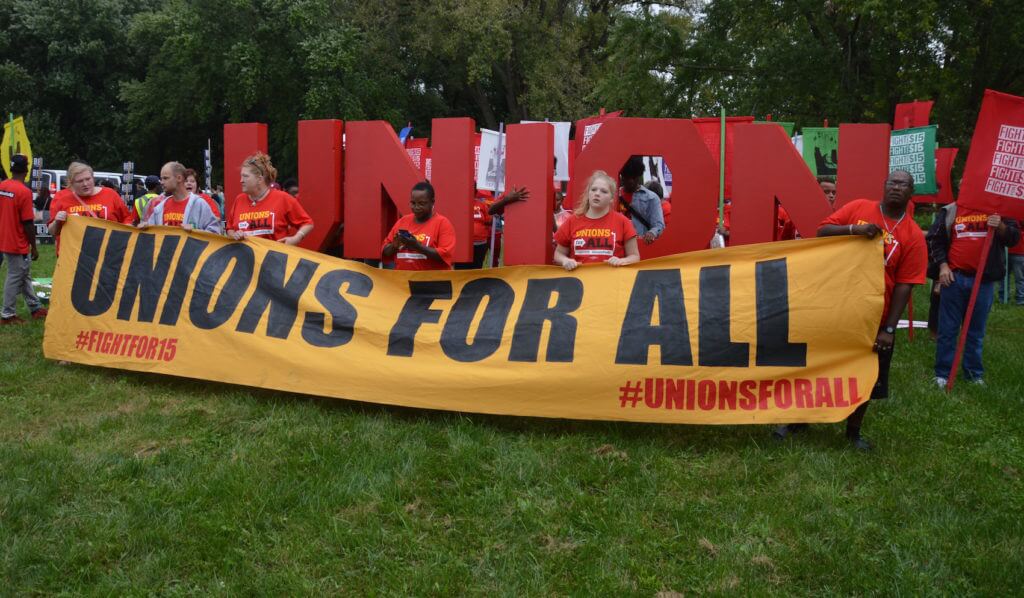 Hammers sounded as members of Amy Klobuchar’s staff placed rows and rows of staked blue ’Amy’ signs around their campsite.

The senator had been traveling around the country this week on a ‘blue wall’ tour to win back states like Michigan and Wisconsin that went red in the 2016 election, so Klobuchar’s Steak Fry decoration was, in fact, a ‘blue wall’ that compiled signs helped create.

While most of Klobuchar’s staff created the wall at the campsite, other supporters roamed the Steak Fry grounds. 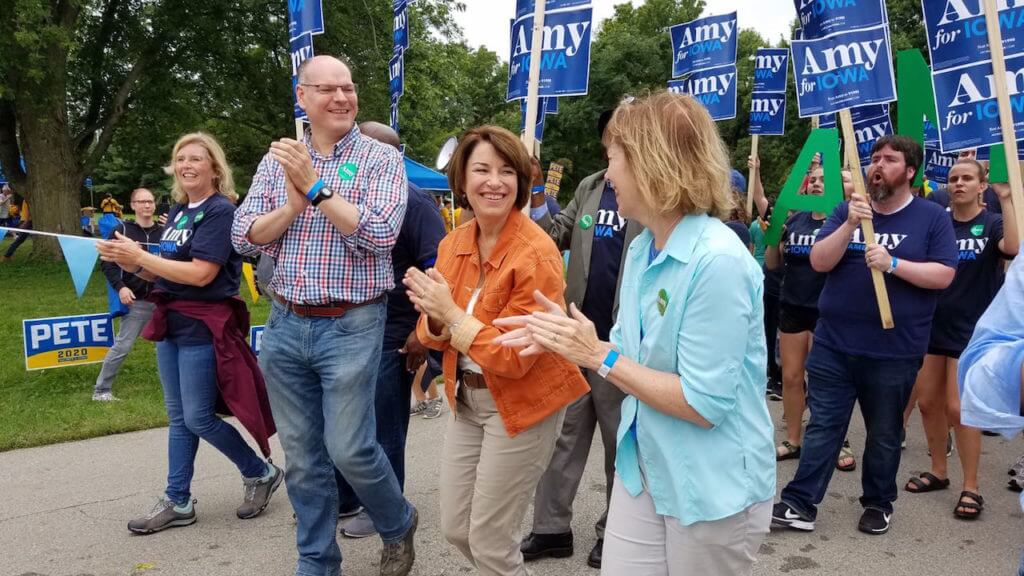 Klobuchar’s ‘heartland’ theme was displayed as supporters donning ‘Amy’ t-shirts, or alternatively, collared shirts, signed in under a large white tent and then joined picketing crowds.

One group left after checking in, chanting ‘Midwest is best.’

The O’Rourke group capitalized on their space near the pond and were the only team to cover the water, with a small raft bearing Beto’s name floating and moving with the wind. They also had massive, handmade letters spelling out “You Beto Believe It” at their rally site. 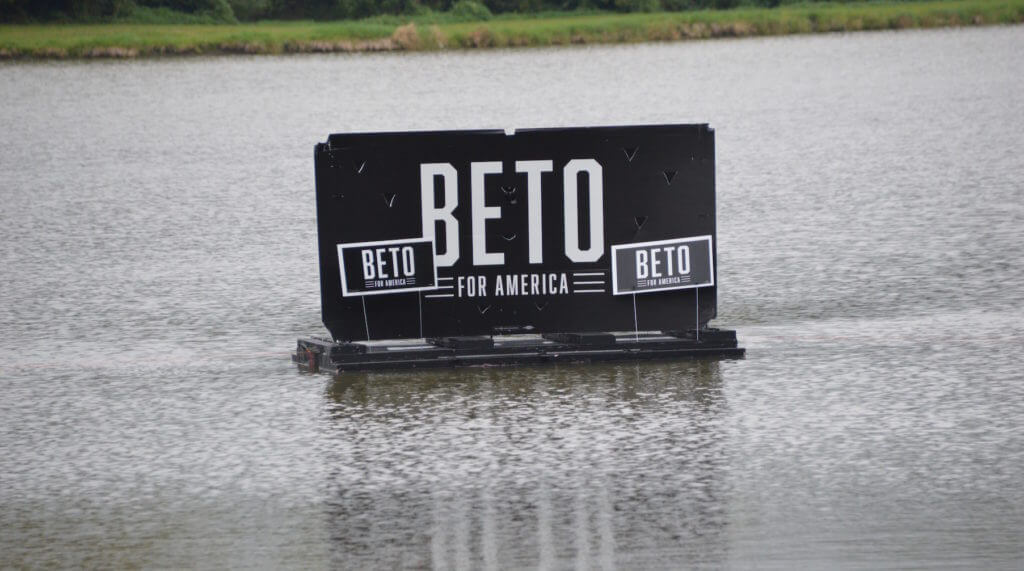 The Beto site had a variety of signs, too. They formed a fence of sorts with the yard signs, but they also had larger wooden signs propped against cars, multiple banners, and a big sign up along the entrance.

They went back and forth from their rally site and the entrance and one of their chants was “hell yes,” a reference to O’Rourke’s answer at the last debate that “hell yes, we’re going to take your AR-15s.”

Similar to the rally sign, they had giant blue letters spelling “Hell Yes,” too. 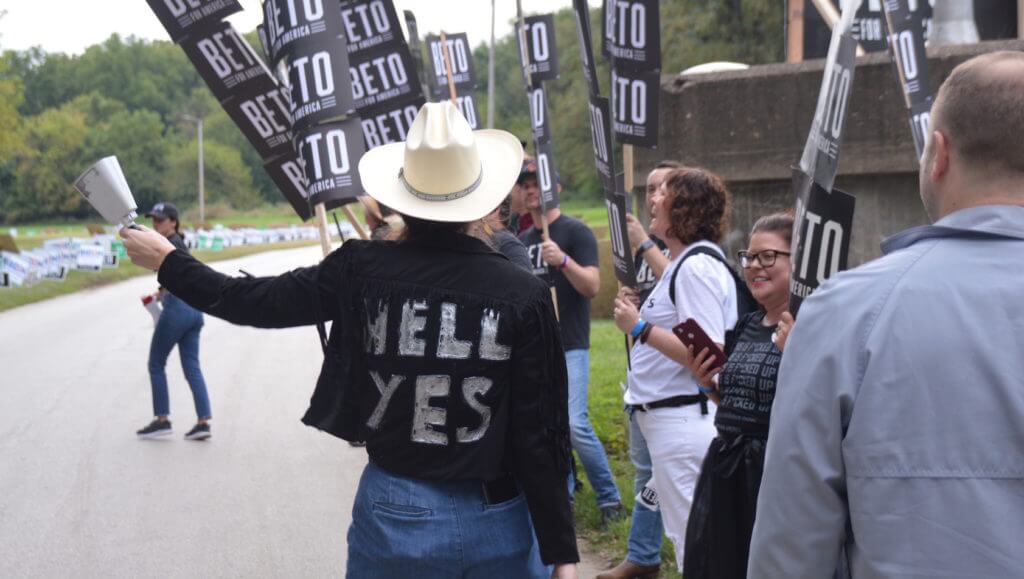 Another hallmark, and easy identifier, of their site were cowbells with Beto’s name.

And of course, the rally site was blasting the rock music heard at many of the candidate’s events. Some of the many songs were “Sweet Home Alabama,” “Born to be Wild” and Hall and Oates’ “You Make My Dreams Come True.”

Survivor’s “Eye of the Tiger” was the cue to move from the rally site to their spots on the road. 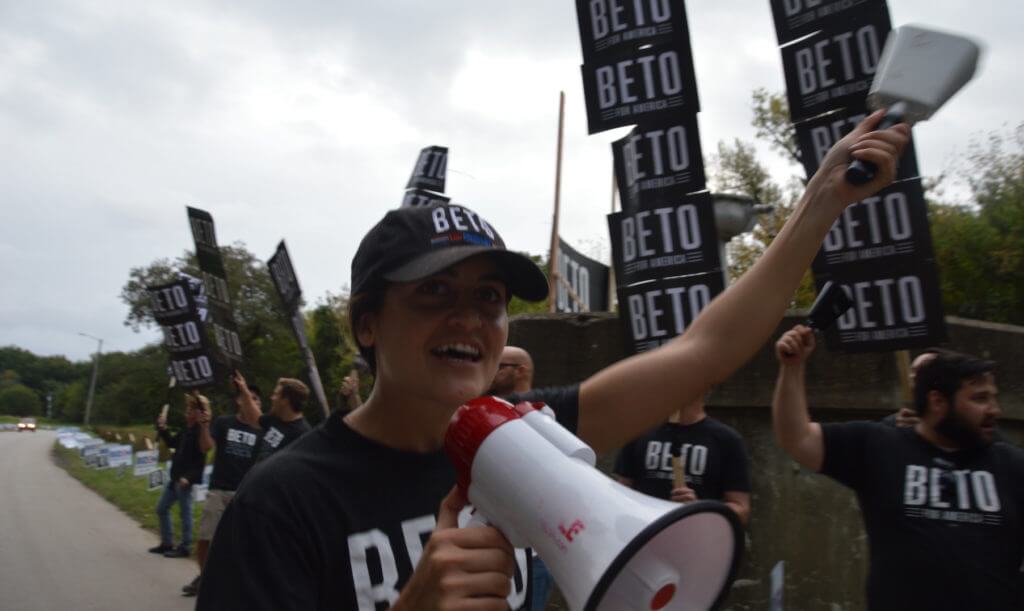 Joe Biden could have put on his own personal Steak Fry had he wanted. His campaign set up on a sprawling section of the Water Works grounds, erecting a tent that looked larger than the ones inside the official event.

Campaign volunteers flipped pancakes for supporters who showed up early, and they set up a bounce house for kids.

People driving into the Steak Fry saw a fire truck adorned with Biden signs at the edge of his rally space. The firefighters union endorsed Biden early on in his run, and firefighters showed up en masse in yellow Biden t-shirts to cheer on their candidate.

All the hallmarks of Biden’s personality were there: an ice cream truck was on hand and the campaign placards had images of aviator shades on them.

At least six busses arrived full of supporters to fill out Biden’s rally space, appearing to have one of the largest turnouts of the candidates.

Julián Castro’s Texan roots were on full display at his camp. Castro’s team started setting up camp later in the morning, really getting started when a Mariachi band arrived in a traveling trailer.

The band, dressed in traditional garb, began setting up their equipment in front of a towering blue ‘Julián Castro’ sign.

Castro supporters that weren’t dressed in t-shirts that said ‘Adios Trump’ or “Julián Castro 2020’ looked as if they just came off the ranch. Blue jeans and black-and-white checkered shirts, as well as Texan inspired t-shirts were among the looks congregated at the candidate’s campsite.

Members of Castro’s staff and supporters wore white cowboy hats as songs from Texans like Selena, Beyoncé and Kacey Musgraves wafted through the speakers.

Reggaeton and Cumbia music also projected, and supporters danced as they set up Castro signs—that said things like Castro Country– around their site.

Booker’s team continues to grow throughout the morning. They’ve got possibly the biggest display at their rally site of the campaigns, with two large lifts covered in signs, a stage for him to speak on and a massive PA system.

The team served up some breakfast to their workers and volunteers, and have been dancing and playing bags. With the large setup they’ve got, look for them to be rather rowdy once they start their march into the venue. 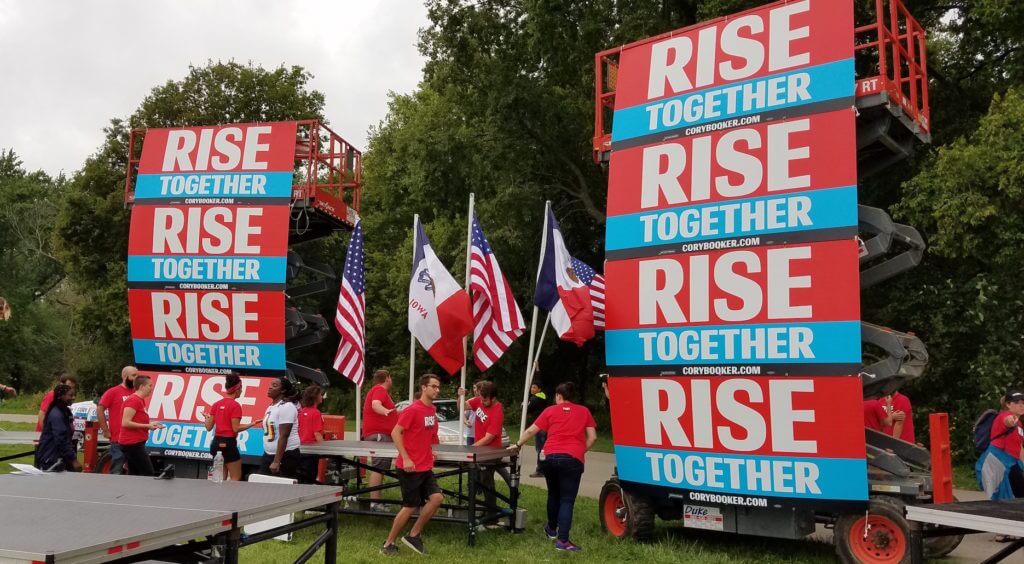 One of the bags sets, made by a supporter in Iowa, is decorated with a giant photo of Booker’s face over an American flag – all set with stars ‘n’ stripes bags.

Booker’s team has made it clear that they are approaching their deadline for expansion to make a real push for the nomination, so they’ll try to make a lot of noise and grow their support in a big way this weekend.

The Sanders team isn’t at the Steak Fry yet, they’re out knocking doors instead and they’ll be arriving later. Their tent is in between the Booker and Warren camps, so it looks a little desolate, but their team is starting to show up and set up now. 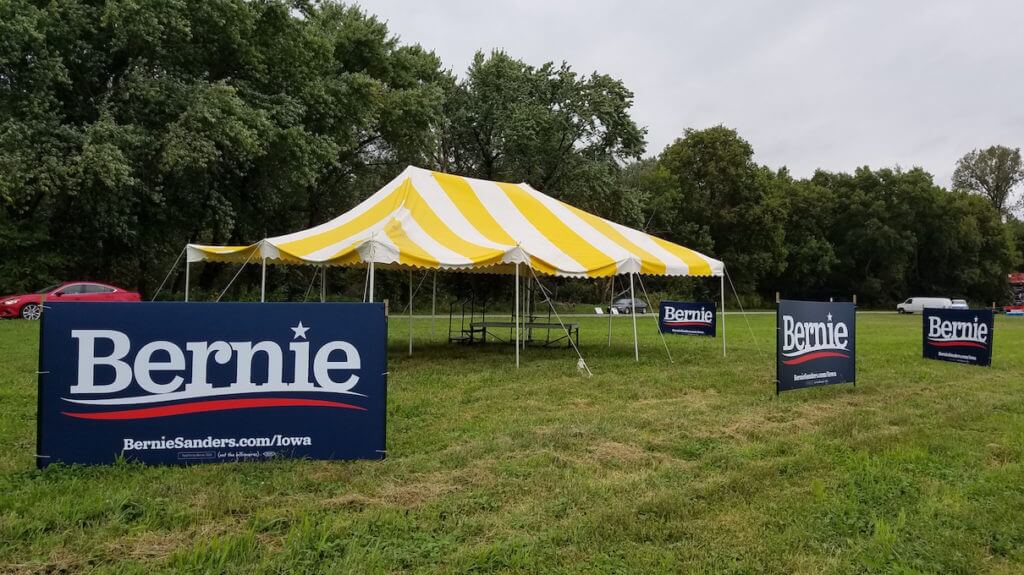 In a clever move, they brought out a door with signs on it to explain their absence, and they’re keeping track of how many doors have been knocked on the day.

At this point, around 10:30, they’re up over 2,000 doors knocked – we’ll see where they’re at by the time their volunteers start rolling in. 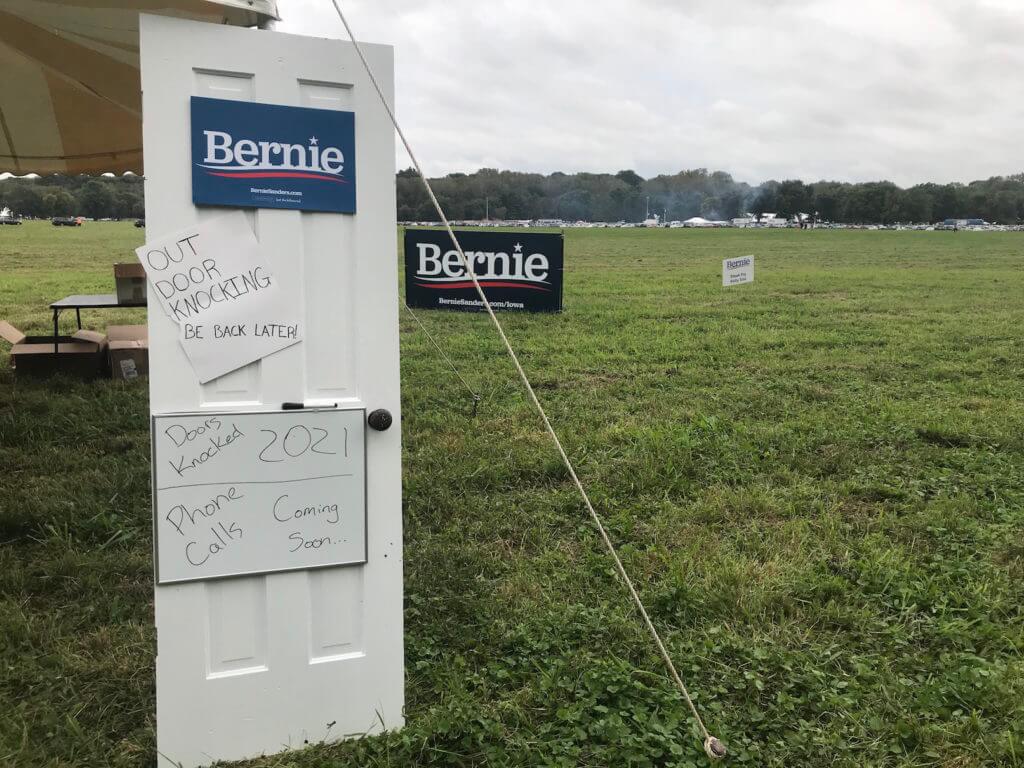 Bennet Puts the Hammer Down

Bennet’s team is excited right out of the gates. While they don’t have the biggest crew of the campaigns present today, they’re making the most of what they’ve got by being loud and proud.

What else do they have? Well, they’ve got a giant, 10-foot gavel. It’s part of Bennet’s plan to ‘pound some truth’ into the campaign at the Steak Fry – an ongoing part of his campaign. 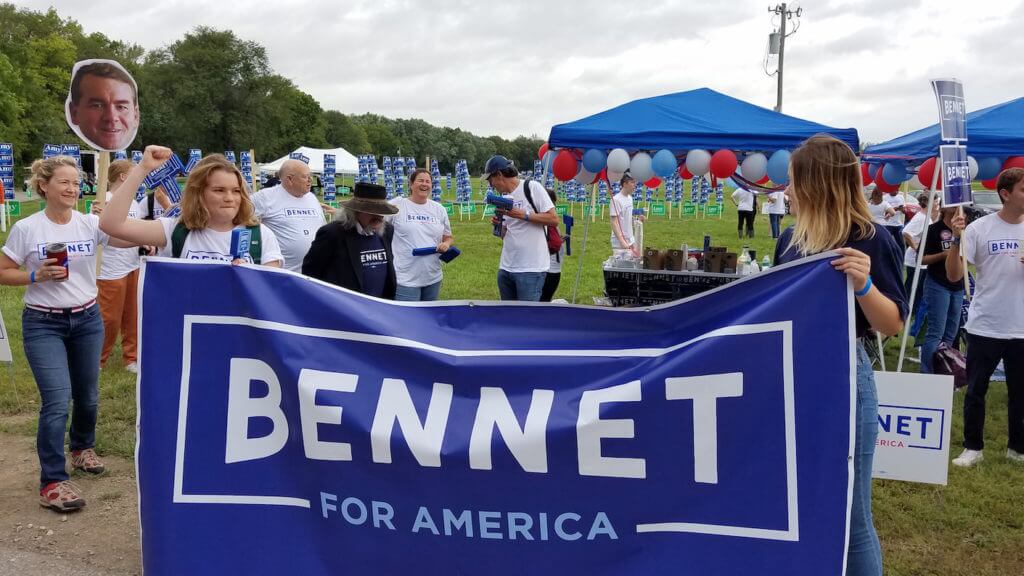 Bennet’s campaign is pushing hard right now, this weekend marking his fourth trip to Iowa, along with the team spending a lot of money on TV and social media ads this month. We’ll see if Bennet can stand out on the stage and rally some more support out of this event.