Amy Klobuchar may have an extra bounce in her step as she heads into this weekend’s big Polk County Democrats Steak Fry event. A poll put out this morning by Focus On Rural America has her moving into 5th place in the Iowa Caucus, leap-frogging fellow senator Kamala Harris.

The poll, conducted by David Binder Research after the third Democratic debate from September 14 to 17, has Joe Biden holding a narrow lead at 25%, with Elizabeth Warren close behind at 23%.

Focus On Rural America has conducted a quarterly poll since September of 2018, and there’s been movement for the candidates between nearly every survey: 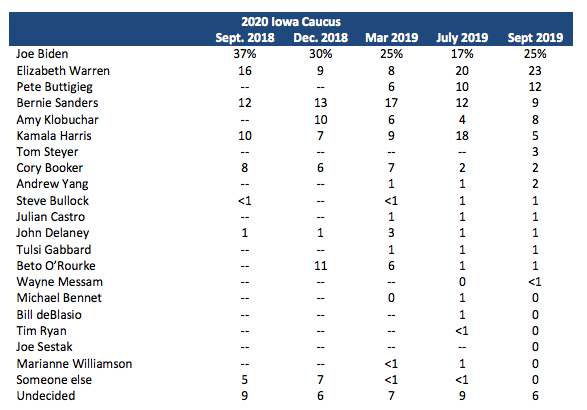 It’s a bit of a bounce-back for Biden, who regains his lead in September, and a big drop-off for Harris, who falls a full 13 points since July, when she was riding high off of her first debate performance. Pete Buttigieg still leads the second cluster of contenders behind the two front-runners.

It should be noted that Klobuchar has often over-performed her numbers in other surveys in these Focus On Rural America polls, while they’ve also usually picked up less support for Sanders than nearly every other Iowa polling outfit.

Tom Steyer hops onto the board with a decent 3% after a heavy rotation of TV ads in Iowa for the past two months.

There’s plenty of other intriguing numbers deeper in the survey.

Warren has the strongest positive opinion ratings of the field at 84%, followed by Buttigieg at 81%. 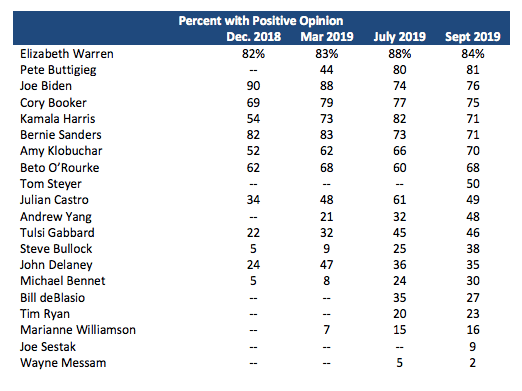 Harris and Julian Castro both saw dips in positive ratings following the third debate. In that debate, Castro came after Biden with some harsh criticism of his record and memory.

Both Cory Booker and Beto O’Rourke have high positive numbers despite their low position in the polls, suggesting that both could have a chance to break out in the final stretch of the caucus. Booker and O’Rourke have sizable field operations in Iowa and lots of endorsements.

Andrew Yang saw a big jump in his positive ratings, and Steve Bullock moved up here as well.

The poll also asked who likely Iowa caucus-goers were actively considering to support, which can be a useful measure in a field this massive. In this question, the news isn’t as good for Yang, with only 16% currently considering him. Castro has also been ruled out by a surprisingly large number of people. 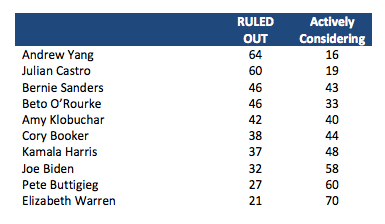 This ranking also shows off Warren’s enduring strength in the Democratic primary, with a full 70% of likely caucus-goers considering backing her. Biden is further behind at 58%, with 32% ruling him out, but that still leads most of the field. Just like with the positive ratings, Buttigieg does well here too.

Once again, Booker shows up here as a candidate to watch, with 44% of likely caucus-goers actively considering him, more than several candidates currently polling above him.

Neither Warren or Buttigieg have received much criticism from other candidates, which seems to be benefiting them significantly as not many Democrats have ruled them out as an option. That might change as we get closer to caucus night and campaigns have to make tough decisions on how to slow down the front-runners.

That might also be some good news for Biden in a roundabout way. Despite constant attacks from his fellow candidates, tough questions in the debates and mostly negative press coverage, Biden still leads. Once negatives are introduced and discussed more on the candidates nipping at his heels, their ratings might see a slight decline. Biden has already weathered some tough months and remains on top.

The debate had some effect on voters’ minds, but not as much as previous ones, the poll finds. The September debate was watched by 30% of respondents, while 35% tuned in for the June debate. It still had some impact, as 12% said they were considering Biden based on his debate performance, which most media analysis said was his strongest of the three. Castro, however, has 18% of respondents saying they aren’t considering him due to the debate.

The poll also asked Iowans about the ongoing drama surrounding the Trump Administration’s favoring of oil refineries over Iowa biofuels. The waivers to oil refineries will hurt Iowa farmers, according to 76% of likely caucus-goers. Another 83% said that Democrats should continue to compete strongly for votes in rural America.

“If Democrats keep showing up in rural communities and standing up for rural voters, we will win the 2020 election. We have an incredible field of candidates and most of them are focused on revitalizing the rural economy, undoing the damage of Trump’s small refinery waivers, and restoring some order to politics-as-usual,” said Patty Judge, Chair of Focus on Rural America and past Lt. Governor and Secretary of Agriculture for Iowa.

The Binder Research poll was conducted on cell and landline phones, surveyed 500 people and has a margin of error of no more than +/- 4.4%.

5 Comments on "Amy Klobuchar Moves Up In Latest Iowa Poll"