In tweets and top official statements this weekend, the Trump White House seems like it’s inching its way toward a conflict with Iran after drone strikes from an unknown source knocked out half of Saudi Arabia’s oil production. Rebels in Yemen took public credit, but there’s suspicion that Iran either provided the weapons or help conduct the attack themselves.

Gabbard, an Iraq War veteran who’s built her political identity in Congress on foreign policy and promoting peace, spent most of her speech at a campaign event in rural Warren County last night addressing the latest Middle Eastern flashpoint. She criticized the Trump Administration for saber rattling with Iran despite offering no evidence that Iran was involved in the attack.

“This President does not have authorization to start a war against Iran,” Gabbard said to about three dozen attendees sitting out on a green field as the sun set. “Congress has not taken that action. Nor is there any authorization in the constitution or otherwise that gives the President of the United States the power to basically pimp out our military to any foreign country like Saudi Arabia. But that’s exactly what he’s doing here.”

What angered Gabbard in particular was Trump’s tweet on Sunday that suggested he was awaiting instructions from Saudi Arabia on where to direct America’s military forces.

Saudi Arabia oil supply was attacked. There is reason to believe that we know the culprit, are locked and loaded depending on verification, but are waiting to hear from the Kingdom as to who they believe was the cause of this attack, and under what terms we would proceed!

“As a soldier, I can tell you this is despicable and a disgrace,” Gabbard said of Trump’s tweet.

Trump has had a very close relationship with Saudi leaders, visiting the Kingdom before any other country after he was inaugurated. The Trump Administration later largely turned a blind eye toward the reports that Crown Prince Mohammed Bin Salman was linked to the murder and dismemberment of Washington Post columnist Jamal Khashoggi.

Gabbard noted that Trump and his advisers have been spoiling for a reason to go to war with Iran for some time. She explained at her event that Trump had designated Iran’s entire military as a “terrorist organization,” something she called “unprecedented” in the history of the world. 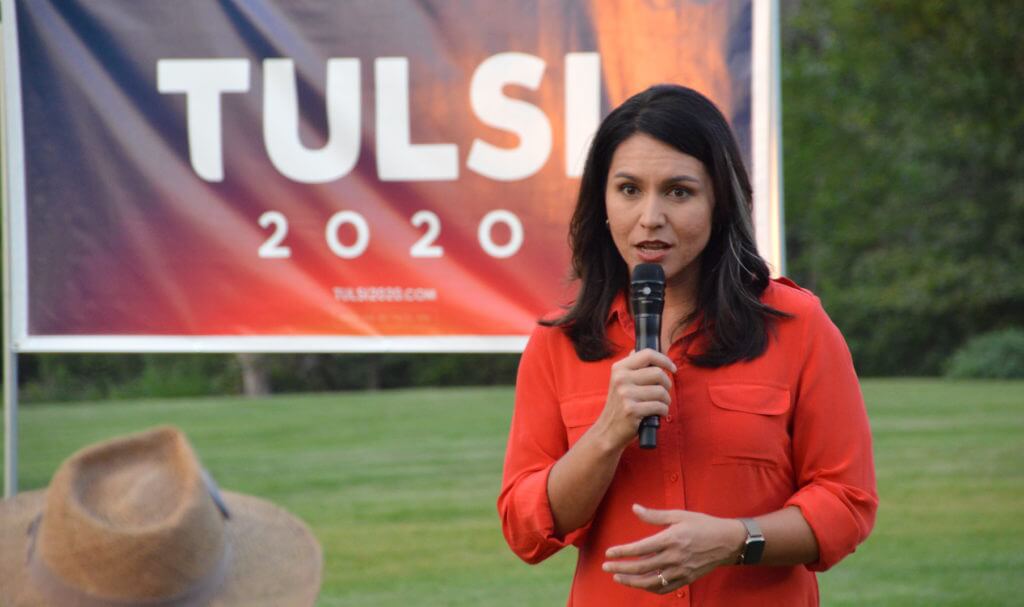 “The reason why they did that is because they want to be able to use the current authorization to use military force that is in place because of the attack on 9/11,” Gabbard said. “They designated Iran’s military as a terrorist group to create a backdoor for them to start a war with Iran without Congressional authorization.”

Such a conflict would significantly more dangerous and consequential than the Iraq War, Gabbard argued, pointing to the size and sophistication of Iran’s military compared to Iraq’s.

“It is unimaginable to see what the consequences would be, but we know it would make what we saw in Iraq, the cost we experienced in Iraq, look like a picnic,” she said.

Gabbard pitched herself in Warren County as the candidate best-suited to take over the commander-in-chief role, explaining her “service above self” mantra that drives her personally. She turned most questions about domestic issues back in part to foreign policy, stating that America could do much more “nation building” at home if so much of the country’s money wasn’t spent on overseas wars.

Just how many conflicts she would have to navigate the U.S. out of if she becomes president may be determined over the next few days as the Saudi Arabia story plays out.

“Trump has said he’s locked and loaded,” Gabbard said. “Iran has said they want to get back into the nuclear agreement … But they said if it comes to it, they are prepared to go to war. We are literally one spark away from that war.”

1 Comment on "Tulsi Gabbard: U.S. “One Spark Away” From War With Iran"