Joe Biden is ramping up his Iowa ground game as the caucus race enters the final months and as his top Democratic opponents narrow the gap in the polls.

The Biden campaign plans to have about 110 total staff in Iowa by the end of September, over 80 of which will be on the field side, they told Starting Line. That’s an increase from the 75 total staff that were in place here by mid-August. They’ll also have just over 20 field offices open by the end of the month, a jump from the 14 they have operating now.

As one of their top campaign advisers told reporters right after Labor Day, the Iowa Caucus may not be a must-win for Biden, but his campaign is still seriously investing in the state to stave off challenges from his closest competitors. The new staffing additions should make them the largest operation of any candidate here, at least from what’s publicly known.

“Biden for President is quickly building the most robust field program in Iowa — not only because we have the largest team in the state, but because like Vice President Biden, our organizers are doggedly determined to pave a better path forward for our country,” Biden’s Iowa state director Jake Braun said.

Elizabeth Warren, Bernie Sanders, Pete Buttigieg and others hope the Iowa Caucus yields the first major upset of Biden’s front-runner status in a long primary. It’s a place that’s been kind in the past to upstart candidates and progressive-leaning contenders who bring new voters out to the caucus.

Biden, however, has plenty of his own strengths here, ones that his newly-expanded field team looks to fully capitalize on.

Many of those longtime Democratic caucus-goers loyal to the Bidens were on hand at the campaign’s Des Moines field office opening this weekend.

The inside of the office was decorated with on-brand ice cream cone and Aviator shades paper cut-outs on the walls. Outside, experienced activists, along with some well-known local endorsers like Polk County Mary Maloney, turned out for some BBQ and to sign up for volunteer shifts with the local field organizing team.

The Biden campaign also has probably the best surrogate speaker of any in the field: Dr. Jill Biden, who helped open the Des Moines and Mason City office.

“I’m grateful for all of you for the time you’ve decided to spend with Team Biden,” she told the crowd of supporters at the Des Moines office on Grand Avenue, singling out praise for local activist Bruce Koeppl, who’d driven her during many past trips in 2007. “You never forget people’s kindness, especially when you’re in your home away from home like I am here in Iowa, the things that people do for you that really make it special.” 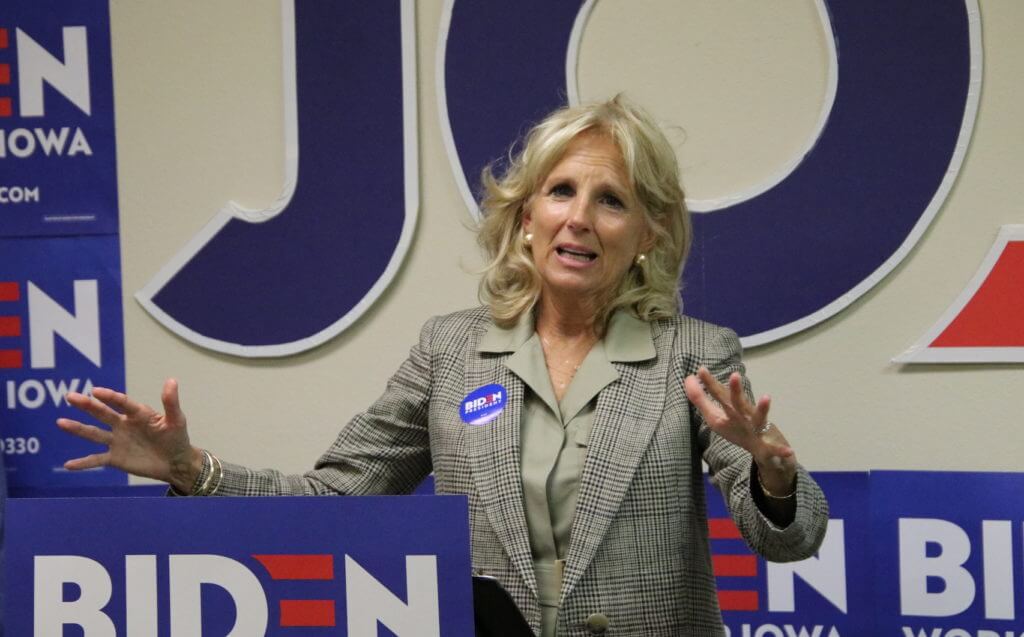 Miyoko Hikiji, a veteran who ran for a state senate seat a few years ago, introduced Dr. Biden. Hikiji and her daughters accompanied the Bidens on their Iowa State Fair visit, one of many trips where the Bidens spent personal time with key caucus leaders. 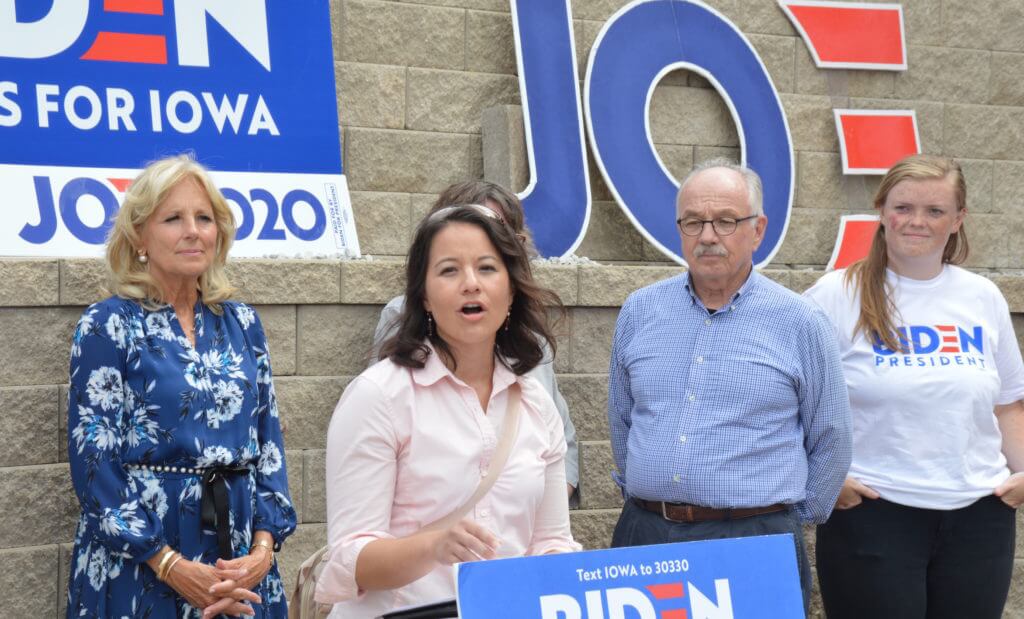 About 75 people turned out for the Des Moines office event, with another 50 up in Mason City on Friday. The crowds at both skewed older, as do most of Biden’s public events while campaigning in Iowa.

And as the field organizers chatted with attendees and signed them up for volunteer shifts, they were playing a catch-up game with some of the rest of the presidential field. Warren and Cory Booker staffed up very early in the year, quickly snatching up a lot of the experienced Iowa operatives. Bernie Sanders brought on staffers from the 2016 campaign and new ones with deep ties to Iowa’s progressive community. Kamala Harris built her large field operation up about a month before Biden’s really started to expand.

A later start has its consequences, though Biden does have some well-connected Iowa hands in Jesse Harris, their Iowa senior adviser, and Lucas Oglesbee, their deputy political director.

But the campaign has one person with deeper relationships in Iowa than any other: Biden himself.

“[Biden] did a couple of visits in 2007 to several parts of my turf,” Haller, who organizes Sac, Calhoun, Buena Vista, Pocahontas, Clay, Palo Alto, Emmet and Dickinson counties, told Starting Line. “Twelve years later, there’s a huge following in Emmetsburg led by the Kibbies … They’ve been hugely helpful because they have really strong roots there. Working with people like that makes my job much easier.”

Jack Kibbie is a former president of the Iowa Senate, and he hosted Biden at his lakefront home in 2007.

For the Iowa Caucus, where voters meet in-person at neighborhood gatherings to discuss and caucus for their candidates, relationships matter more than anything else. New campaign technologies or air-dropping a ton of staff in near the end are nice, but nothing can replace the personal relationships that drive the choices of engaged Iowa activists.

“Yeah, we know Joe, he was here in the 80’s. He played Bocce ball with us,” Steele said is what she’s heard from voters on Des Moines’ South Side.

The South Side is Steele’s turf for the caucus, a place where relationships are everything among the old Italian families and the new immigrants living there. A heavily-Democratic, working-class, union-dense part of Des Moines, Biden should run strong on the South Side, where Democrats tend to be a little more moderate or conservative and prefer well-known, trusted politicians.

“The South Side is about if you’re at their door,” Steele said. “In terms of building community on the South Side, which I love, is finding those leaders. Finding the person who is so strong about labor that he talks to his neighbors every day about it.” 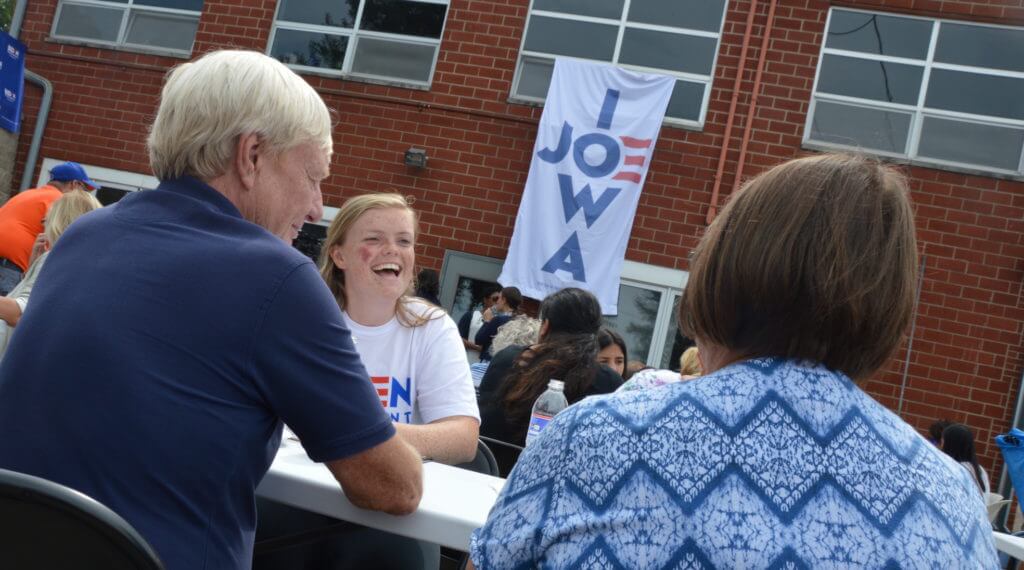 Biden has some good inroads in that part of the city, thanks in part to State Representative Bruce Hunter and Betty Brim-Hunter, a former political director for the Iowa Federation of Labor. And Biden’s stance on the issues are a good fit for the area, too.

“There were people who didn’t have health care in the early 2000s, but now do because of the Affordable Care Act,” Steele said of voters she talks to. “They are also very union-heavy, so these are people who fought for incredible benefits. And elderly voter talk about how they have Medicare or Medicaid, but they also have private supplemental insurance, and they don’t want that taken away.” 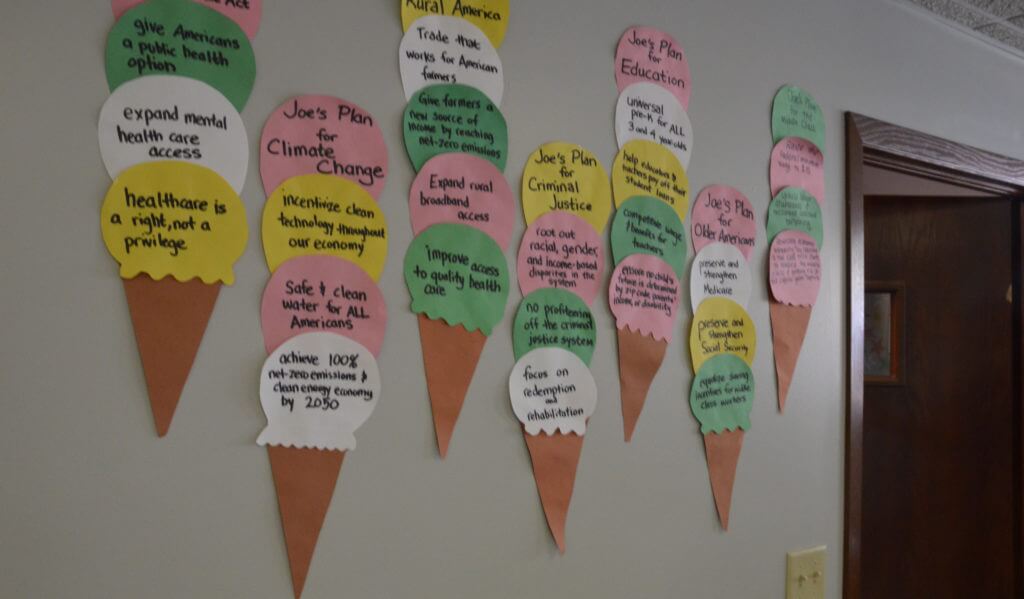 Much of what drives the voters backing Biden are also what motivates the staffers that make up Biden’s sprawling Iowa operation.

Grace Darrah, a field organizer for Jasper and Marion counties, joined the team because of what the Affordable Care Act meant to her personally.

“My father passed away when I was a kid unexpectedly from a heart a condition, which caused a lot of stress in my family,” Darrah said. “There were worries with me having a preexisting condition that may affect my ability to have access to health care … With the passage of the ACA, it really helped my family in a lot of ways and anxiety.” 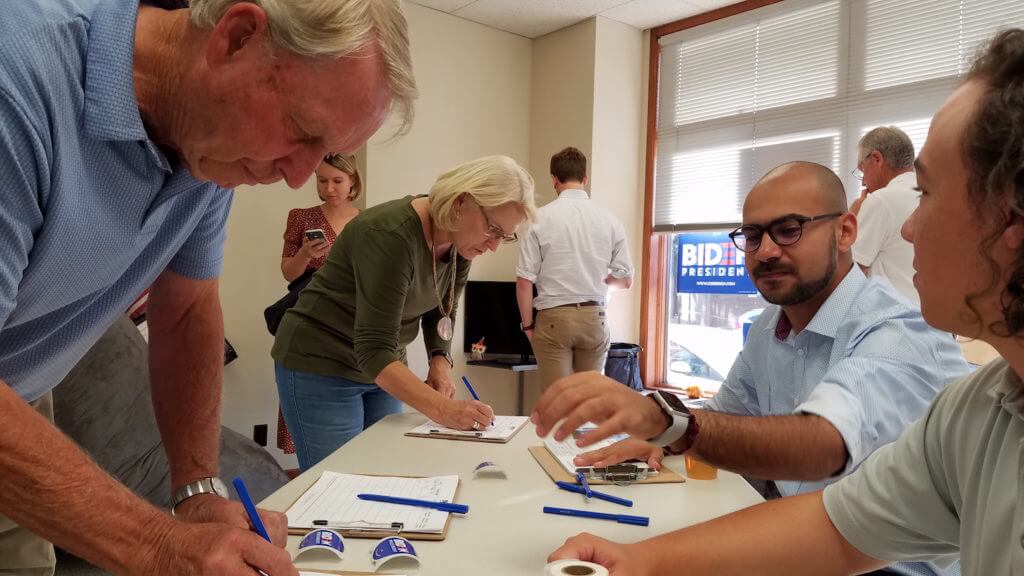 Originally from Baltimore, Maryland, where she first got involved in politics by knocking on doors with her mother for Martin O’Malley, Darrah now is tasked with winning over caucus-goers in Newton, a blue-collar town that’s seen its ups and down with manufacturing jobs.

There, too, old Biden stories remain. One family showed Darrah the thank-you note that Biden sent them in 2007 after they paid for Biden’s tab at a local restaurant they ran into him at after a campaign event.

Organizers like Steele signed on with Biden for other parts of his legacy. Growing up in Denver, Colorado, she witnessed the consequences of gun violence early and often.

“A lot of students were committing suicide because they had access to gun,” Steele said, explaining that Colorado had the ninth-highest rate of teenage suicides in the country. “I also had a classmate whose parents died in the Aurora movie shooting, and I knew someone who stole his father’s gun, brought it to school and killed a 16-year-old girl in the library … I remember sitting in my English class sophomore year, thinking about what I would do if someone came in with an assault rifle, not what I was going to wear to prom.”

Biden’s 1994 vote on the assault weapon ban helped seal the deal with her.

“What got me on Team Joe is that he has banned assault weapons before,” she said. “He did something to try to stop these atrocities.” 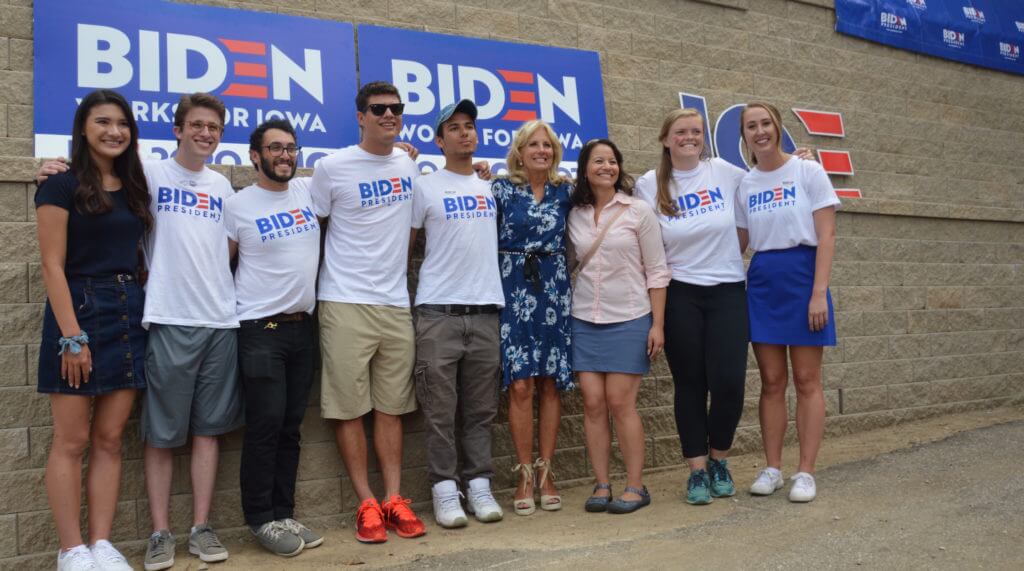 For other organizers, the caucus presents a way to mobilize communities like their own to get more involved in politics.

Haller, who was born in Colombia and came to America when he was seven, is working to get the diverse community in Storm Lake more engaged.

“All [my family] wanted for my brother and I were more opportunities than they did,” Haller said of his aunts and grandmother that raised him in Colombia. “A land where if you work hard, have enough talent, conviction and passion, anything is possible. They really bought into that. I’m the direct product of those beliefs … There’s a lot of kids in this country, as great as it is, a lot of kids that look like me that, Latino boys and girls and immigrants, don’t have the same access to those opportunities.”

Haller’s goal has been to “normalize” political participation among the Latino and Southeast Asian communities in Storm Lake by continually knocking doors, calling them and inviting them to events. He’s said he’s seen progress from people who were initially hostile when he first arrived, noting that recruiting local bilingual volunteers is key to building trust.

For Biden to succeed in Iowa and hold off the rise of his fellow Democratic candidates, he’ll need to run up margins in blue-collar areas like Newton or Des Moines’ South Side, while also doing well in rural Iowa with older voters. Add in outreach efforts in more diverse communities, and it could help compensate for some of the suburban and progressive urban areas that other Democrats are expected to do well in. 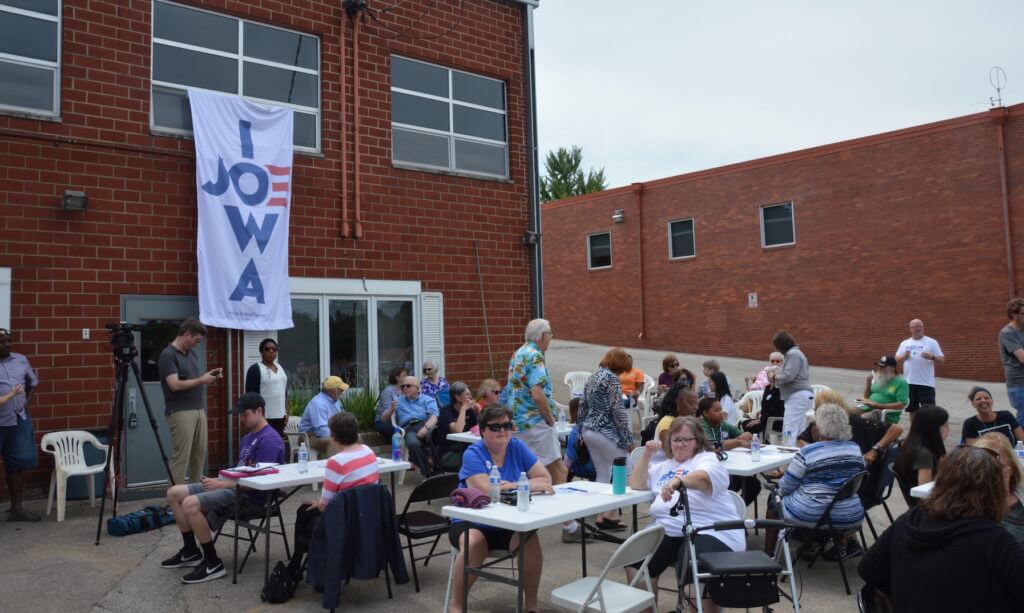 That respect and universal name ID has put Biden in the driver’s seat for this primary. His large field team now just needs to make sure that actually translates into caucus-night support.