Pete Buttigieg made his to way to the Iowa State Fair the way many regular Iowans do: on a DART bus.

The South Bend mayor hopped on board at the downtown shuttle stop this afternoon, much to the surprise of fellow riders. Two of the people that Buttigieg sat down next to were already planning to go watch his speech at the Fair.

Buttigieg introduced himself around and sat down as the bus took off on the 15-minute trip over to the fairgrounds. 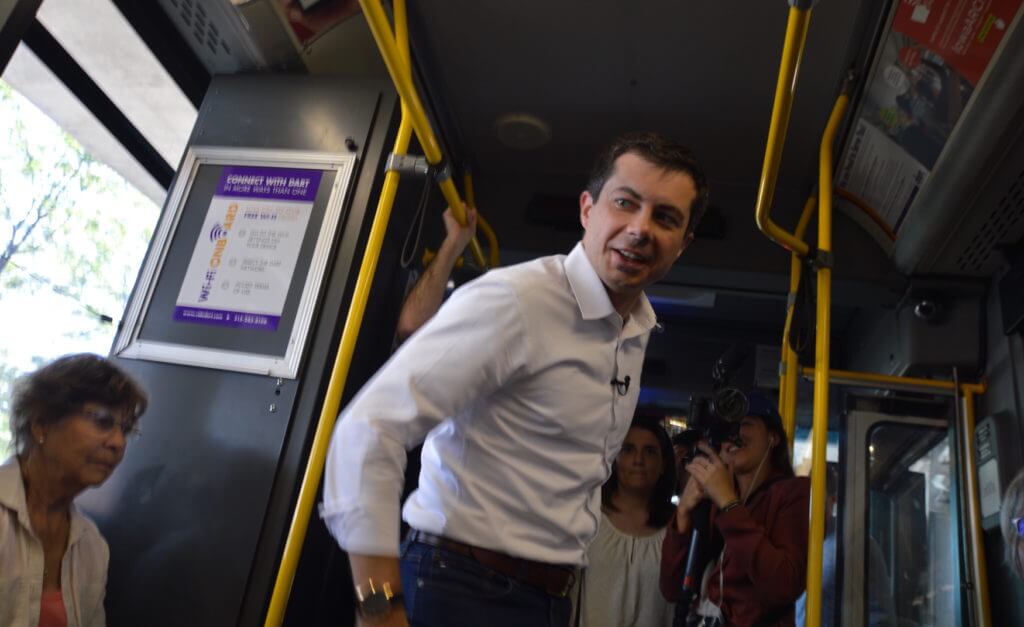 He chatted with one older couple that farmed and raised horses, explaining to them he had just rolled out a rural economy plan that day, one that focused on market consolidation.

“I saw that corn’s starting to come up a little bit,” Buttigieg mentioned.

“You’re not up on the times, they got killed the last two days,” the man replied. “It’s horrible. Soy is a little better.”

Corn prices took a drastic hit on Monday after a USDA report predicted much more corn would be produced than anticipated this year, despite weather problems for much of spring and summer.

The farmer pulled out his phone and pointed out the market changes to Buttigieg, who listened and asked some more questions. 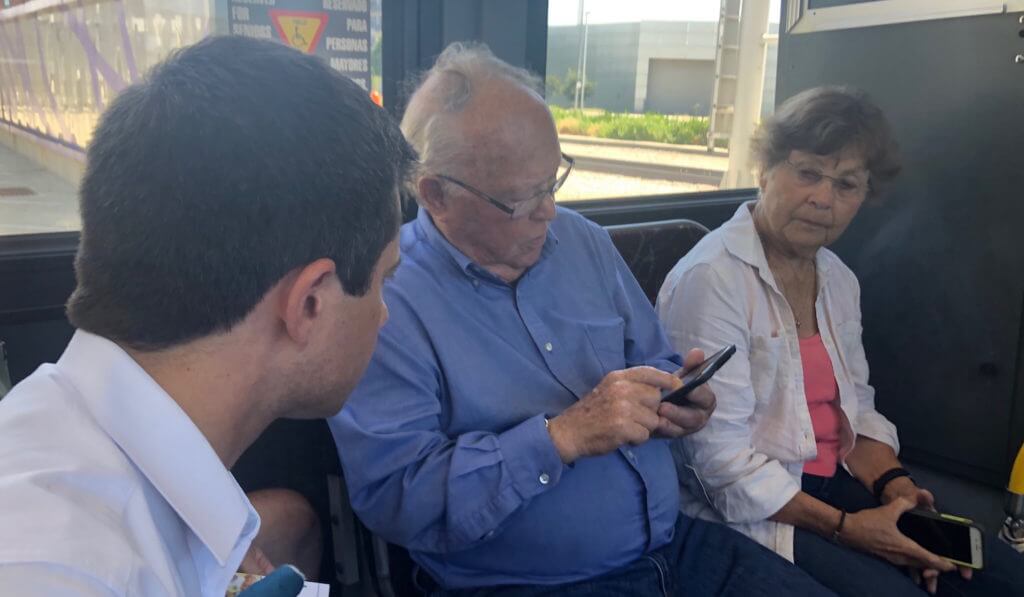 Some of Buttigieg’s seat-mates suggested various State Fair foods to test out, listing off the beef sundae, a pork chop-on-a-stick (which he would end up getting) and the beer at Stockton’s.

“I’ll try it once,” Buttigieg said of the beef sundae.

By sheer coincidence, Buttigieg ended up sitting down to a retired teacher who was the relatively recent president of the Iowa State Education Association, the state teachers union.

Chris Bern, the former ISEA leader, was headed to the Fair specifically to see Buttigieg and ask him about his stance on charter schools. A friend of Bern had shared a story with him that suggested that Buttigieg was backed by donors who supported charter schools.

“I don’t know where that came from,” Buttigieg responded, confused. He noted his campaign hasn’t released a full education plan yet, and that he’s very supportive of public education.

Buttigieg stated in a press gaggle back in May that he opposed for-profit charter schools. The story may have come from Splinter News, a left-wing site that seems to be rather antagonistic toward Buttigieg.

“I was coming to hear him, so I’m thrilled I got to ask that question, and I’m very satisfied with his answer,” Bern told Starting Line after.

“He’s a contender,” Bern said of Buttigieg for his caucus support, but noted he’s still undecided and is waiting for the field to shrink some.

Upon arriving at the State Fair, Buttigieg threw himself into the full, weird spirit of campaigning there. He stopped often throughout his wondering, starting off with a root beer float before getting to the Des Moines Register Political Soapbox stage. 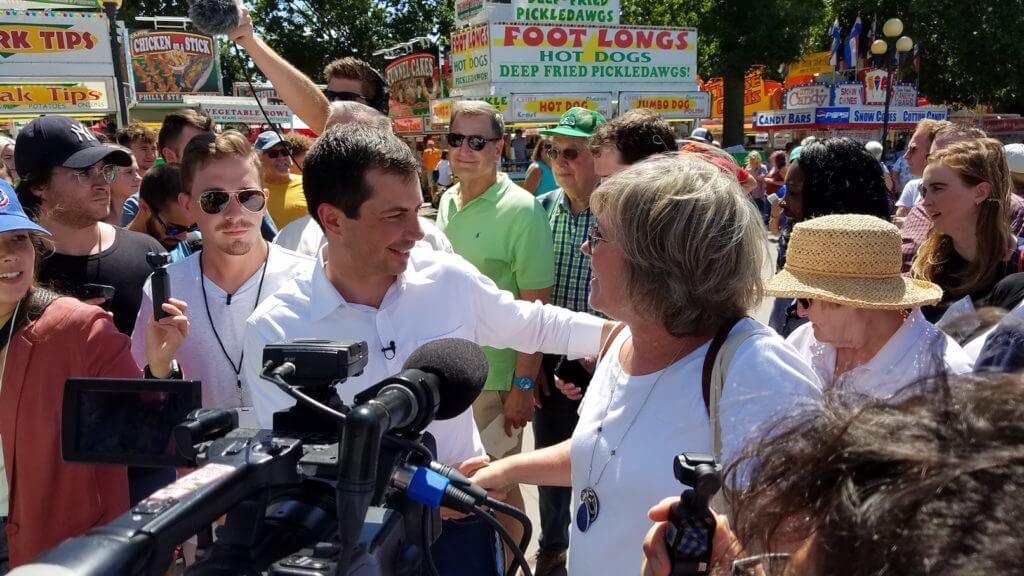 A very large crowd awaited his turn on the Soapbox; he’s the second-to-last one to take the stage, with Congressman Seth Moulton finishing things off on Saturday. Buttigieg’s audience did not look as large as those that Bernie Sanders, Elizabeth Warren, Kamala Harris or Cory Booker drew, but those were weekend visits when there’s more people at the Fair. 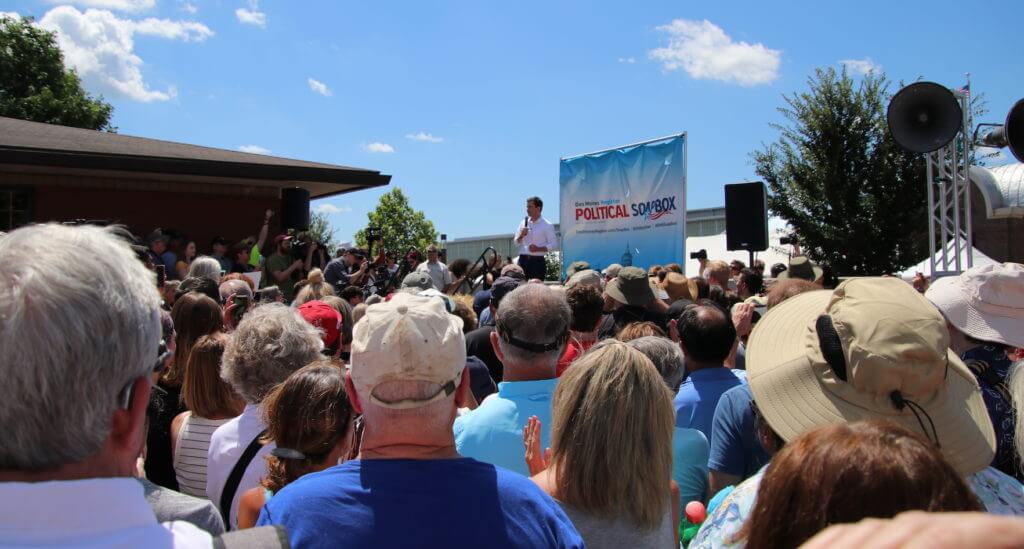 Most of Buttigieg’s short speech was from his usual stump, then he jumped into questions, looking like he was enjoying the back and forth with the crowd.

One of his largest applause lines came from a response on campaign finance laws.

“This is not a democracy as long as dollars can out-vote people,” Buttigieg said. “Citizens United was a disaster for this country, and we need reform … If it’s really true that under this constitution we can’t have common-sense campaign finance reform, if that’s really true, then it’s time for a constitutional amendment to clear this up once and for all, that money is not the same thing as speech, and that corporations do not have the same political souls as human beings like you and me. Don’t tell me we can’t do that!” 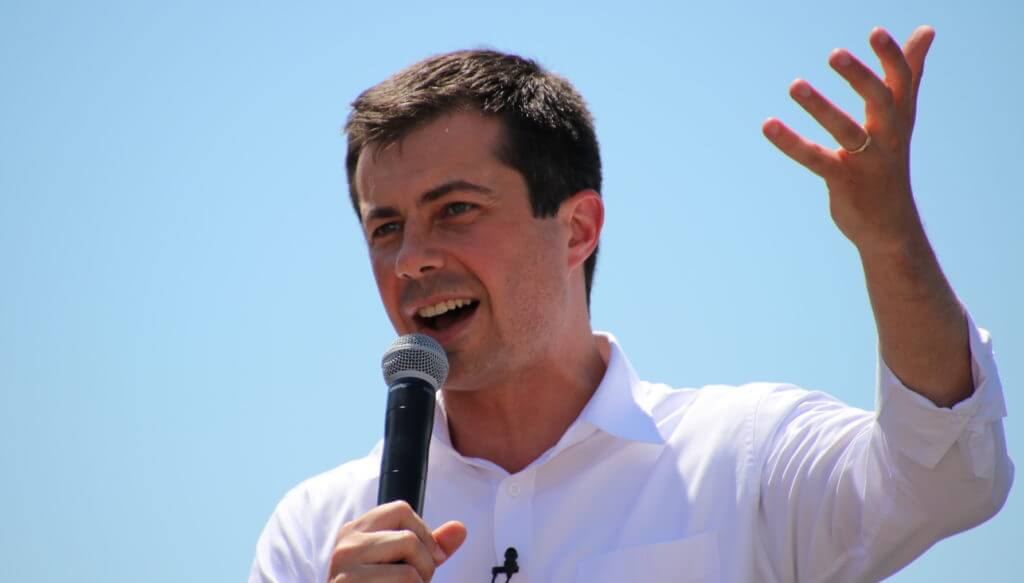 He also took up one mother’s request to later go down the giant yellow slide with her son.

Mayor @PeteButtigieg rides the giant slide with a little boy who asked him to ride with him #IowaStateFair pic.twitter.com/hT2u2T1qvz

With the day all to himself, Buttigieg took a sizable roving press gang with him as he hit all the usual stops at the Fair — the Pork Producers tent, WHO-TV’s Cast Your Kernel, the Butter Cow — and a lot of impromptu visits. He stopped for an abnormally large number of snacks and foods-on-sticks, getting a pork chop, a sausage sandwich, a fried oreo, a “bacon-ball BLT” and more.

He was also one of the few candidates to make it over to the wind turbine blade placed at the edge of the Fair to sign his name on it.

Throughout the long visit, Buttigieg got many well-wishers and supporters who ran up to him. Even with the throng of reporters around him, Buttigieg made an effort to stop and chat with many of them. He also sought out any veterans he saw as he walked around and went over to speak with them. 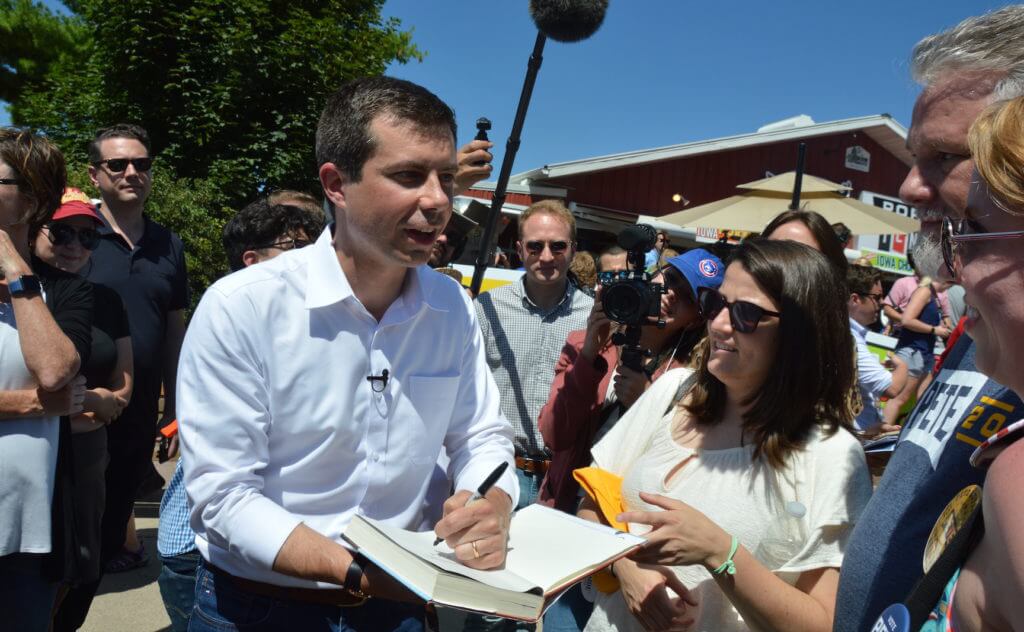 Buttigieg is back in the state after a quick trip for the weekend’s Wing Ding Dinner, and is spending the next two days mostly in Southeast Iowa.