It’s going to be hard to ever top the past four days of politicking at the Iowa State Fair. About 20 presidential candidates in all roamed the fairgrounds from Thursday to Sunday, jumping into the media spectacle that is Iowa Caucus campaigning. Only Pete Buttigieg and Seth Moulton’s trips to the Fair remain.

Starting Line was on hand for all the festivities. Here’s our top ten political moments from the 2019 Iowa State Fair so far:

The most striking political visual over the first four days of the State Fair didn’t come from the candidates tossing fastballs at the carnival games or hoisting their corn dogs in the air for all the press to see. Instead, it was the considerable crowd sizes that greeted most of the Democratic candidates at the Des Moines Register’s Political Soapbox each day. 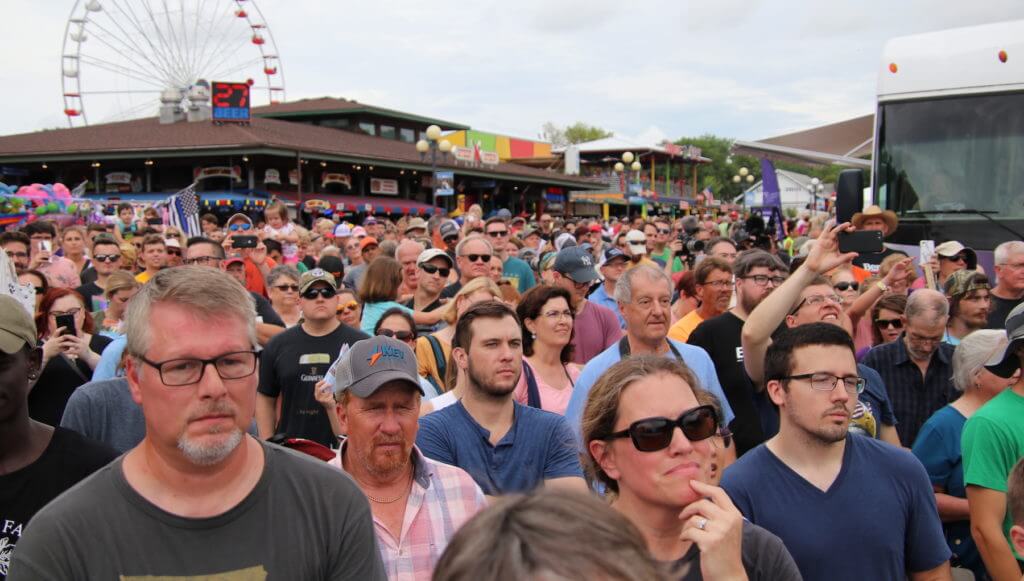 Last caucus cycle, Bernie Sanders turned some heads when he attracted what most believe was the largest-ever crowd to his appearance. This time, four separate candidates — Sanders, Elizabeth Warren, Kamala Harris and Cory Booker — all brought in a crowd nearly as far as the eye could see.

There’s some debate online as to whose was largest (a tent obstructing the view was present for Warren’s but not Sanders’ speech, so it was hard to get an exact visual comparison). Basically, the two most-progressive candidates turned out the largest audiences, but it’s impressive just how many White House hopefuls got massive crowds to watch them.

Booker Gets His Vegan Food

It’s a good thing Cory Booker has come and gone at the Fair, because if Starting Line heard one more reporter joke in the lead-up to his visit about how the senator won’t be able to eat anything vegan there, we may have snapped. Fortunately, Booker discovered a stand serving a fried peanut butter and jelly concoction, and all was right with the world.

What’s a vegan like @CoryBooker eat at the Iowa State Fair? Fried PB&J. Two of them, actually. “A little slice of heaven,” he says. pic.twitter.com/MX5KgZoXGg

Getting The Jump On An Opponent/Friend

It was difficult for candidates to not run into each other during some of the Fair’s busiest days, leading to some of the more entertaining moments. A fan was trying to get Amy Klobuchar to sign a flier while at the Iowa Democratic Party’s booth. Gillibrand was arriving for her shift at the booth and offered to help get it signed, surprising a distracted Klobuchar over her shoulder:

Kirsten Gillibrand sneaks up on and surprises Amy Klobuchar at the Iowa Dems booth pic.twitter.com/xW4LRw9Suk

Some of the Fair’s rides are not for the faint of heart, but Michael Bennet and his family had no hesitation in jumping on board one of the more intense experiences with the Hang Glider ride. Hurtling around in circles in the air, making full loops every four seconds, Bennet clutched on to the handle bars and two of his daughters’ hands as they flew around. Bennet had just eaten a corn dog minutes earlier, but had no issues keeping his Fair fare down on the ride, though he mentioned afterward he was probably done eating anything for a while. 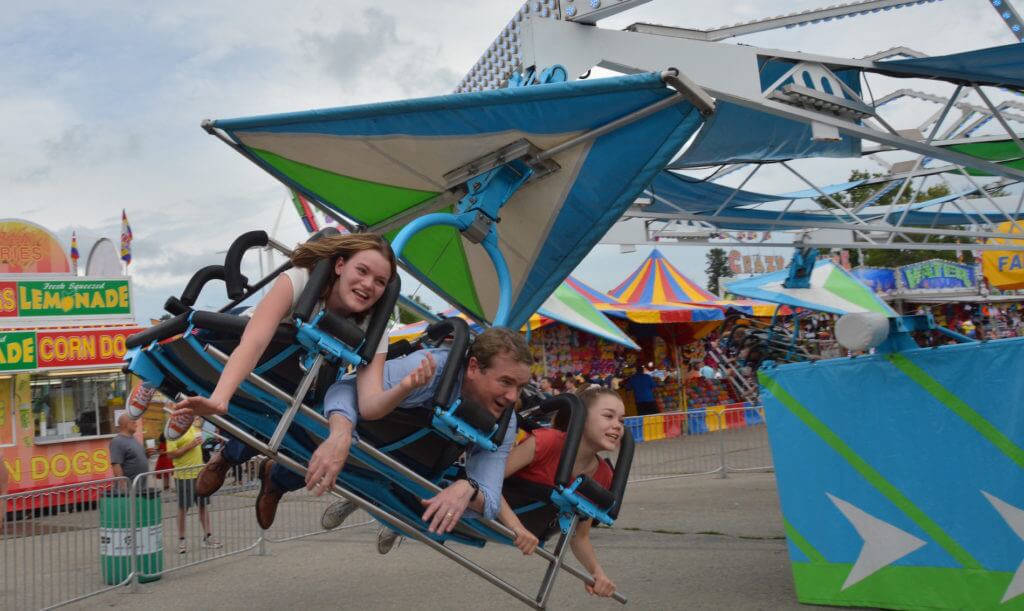 If you want a good time out on the caucus trail, tagging along with Kirsten Gillibrand is always a sure bet to get one.

The New York senator was well-prepared both for her Soapbox speech and a small family vacation, lugging around sun screen and other supplies in her Everytown USA bag she got at the gun forum hours earlier. Gillibrand’s husband and youngest son broke off from the political trail for a while to try out the carnival games. Henry, her son, returned later with a giant blue stuffed animal sloth named Blueberry. He may also have tested some patience by joking about which candidate he should cast his kernel for as the press surrounded them at the WHO-TV booth. 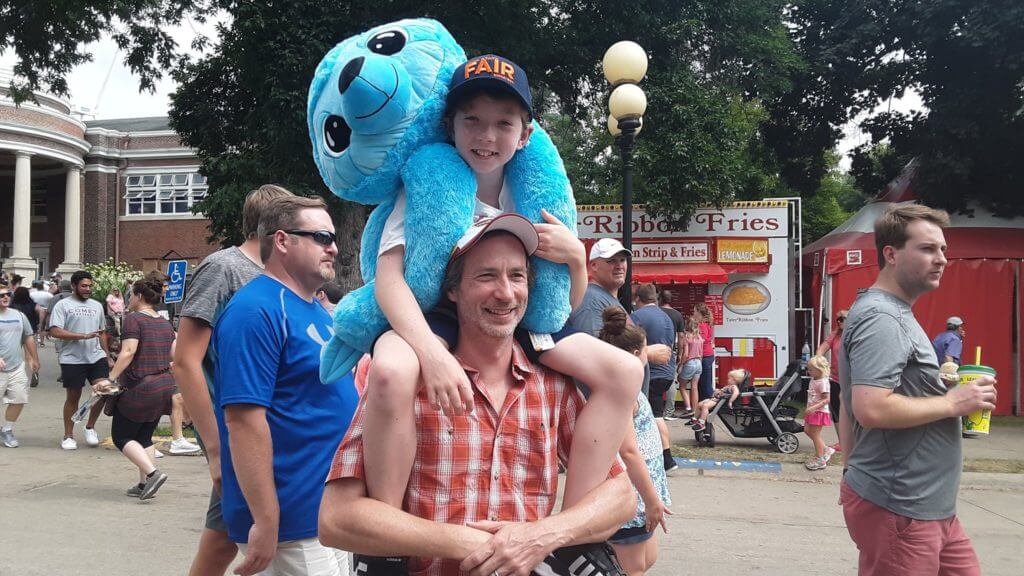 Gillibrand also made some time for other children at the Fair, doing a little quiz with some young girls as she gave them one of her books.

A couple of girls asked @SenGillibrand to sign their book. Senator Gillibrand used it as a teaching opportunity.
"What's the highest court in the land?" pic.twitter.com/VdFZePx9qi

Tim Ryan and his family was near the Soapbox when Harris exited her speech to attend the press gaggle. She stopped to pick up Ryan’s son for a minute while the two talked. There are a lot of nice moments like this during candidates’ visits to Iowa that show off how the Democrats actually feel toward each other. It’s not the contentious sniping you see on TV at the debates.

Tim Ryan runs into Kamala Harris on her way to press gaggle. She holds his son for a minute. “Good luck, but not too much luck!” Ryan tells Harris #IACaucus pic.twitter.com/dQdBYk6WXQ 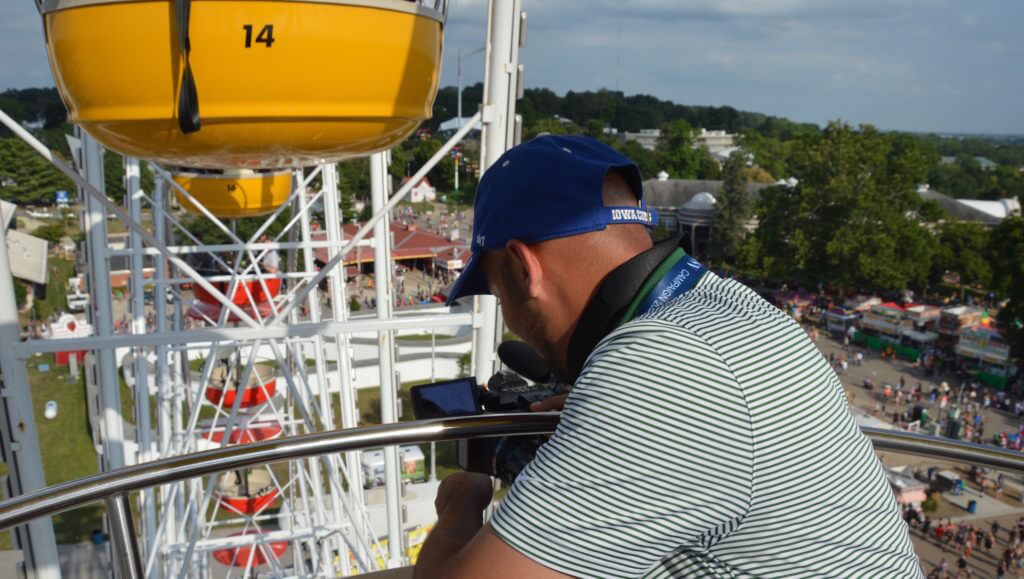 Sometimes you have to get creative to get that perfect shot of a candidate at the Fair. Such was the case when Booker went up in the giant ferris wheel. Getting a good camera angle on the ever-moving target was not easy for the journalists packed into the carriages ahead and behind of Booker (Starting Line included). Some very expensive photography equipment was dangled over the ride, a few hundred feet up, but nothing was dropped.

This was unfortunately the best photo Starting Line was able to get from our vantage point: 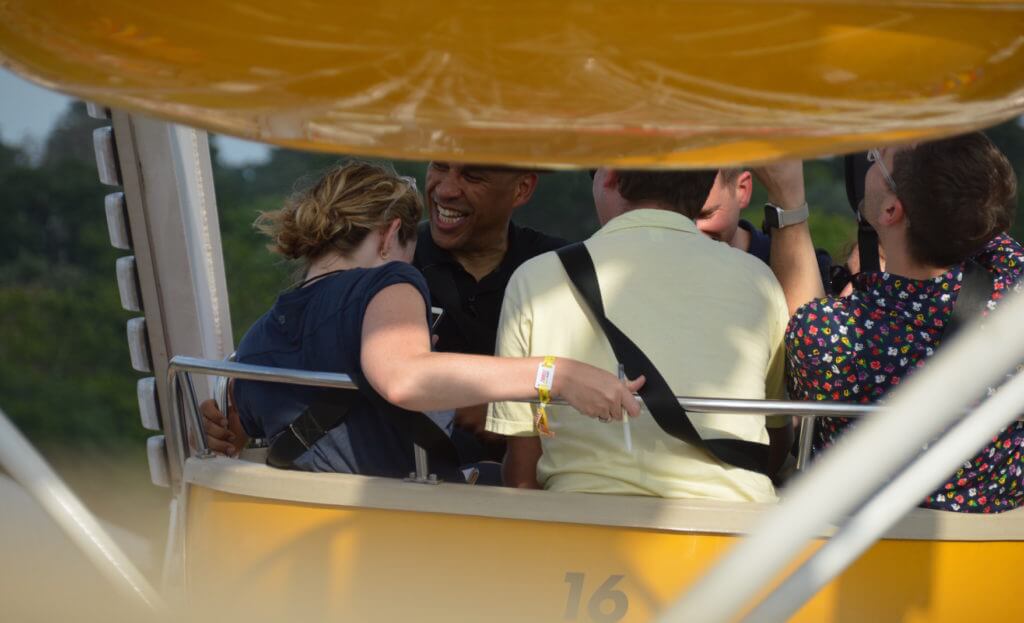 The State Fair concourse can be a dangerous place to be as candidates make their entrances to the fairgrounds. For the high-polling contenders, you can get over 100 reporters surrounding the candidate at all times as half of them walk backwards down the street. Staffers often shout out about strollers in the way so as to avoid a trampling. Sometimes the best approach is to just make yourself thin and let the crowd pass around you.

Fortunately, nothing approached the madness of Hillary Clinton and Donald Trump’s visits in 2015, where you had 50 people deep in all directions. 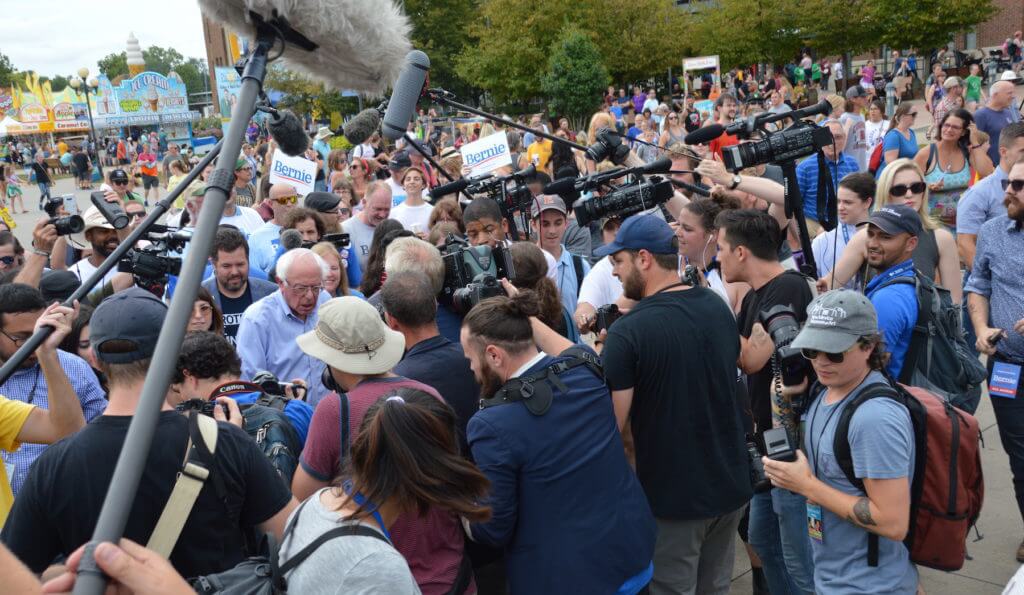 One man angrily yelled at the Sanders scrum as it interrupted his standing around, but really, if you see a fast-moving crowd of 150 people barreling toward you and you don’t get out of the way, who’s the real idiot?

Also, side note: hecklers need to be more creative. The number of people who simply yelled out “Trump!” was a disappointment to what can often be the most entertaining part of candidates’ public visits to big events like the State Fair.

Andrew Yang made his way across the State Fair on Friday, talking about his Universal Basic Income plan to fair-goers and reporters while casually chomping down on a giant turkey leg. He noted that you could get 100 turkey legs a month with his Freedom Dividend plan.

IOWA.@AndrewYang considering amending “Universal Basic Income” plan to instead be “The Turkey Dividend.”

The former Vice President has had some strong moments on the campaign trail, often overshadowed by his occasional verbal slip-ups. On Thursday, he got into a confrontation with a reporter from Breitbart, who suggested Biden was misquoting Donald Trump after the Charlottesville protests. Biden wasn’t having it and told the guy as much to his face.

Also, the credentialed reporter dynamic at the State Fair was a very weird one. The Fair essentially just gave out press badges to anyone who wanted them, leading to some folks who appeared to be conservative trolls or Republican operatives pressing cameras into candidates’ faces and asking leading/incendiary questions. They refused to identify who they were with, leading to frustration from the rest of the actual journalists on hand.

Up close confrontation at the Iowa state fair:this man accuses ⁦@JoeBiden of misquoting ⁦@realDonaldTrump⁩ on white supremacists — and Biden tears into him. pic.twitter.com/2ycHT869jP