At the outset of his speech last week in Burlington, former Vice President Joe Biden told the crowd his remarks would be different than planned.

“I planned on coming … to talk about agriculture policy, unions, rural policy, etc.,” said Biden, at a barn-themed event space in rural Burlington. “But too much has happened in the recent past, and I have prepared for me, what is a speech that I hope will set a marker for what we should be doing.”

For some in the audience, comprised in part by local party leaders and labor union officials, Biden’s speech sounded like something he would deliver in a general election fight against Republican President Donald Trump, not in the midst of a heated Democratic primary.

“It seemed to me like he wasn’t giving a speech for a primary, he was giving a speech for a general election,” said Lucy Giehl, of West Burlington. “On the one hand, they’ve got to talk about this stuff with Trump, but on the other hand, that’s all he talked about. I’d like to hear more positive stuff about what he’s going to do.”

Barbara Evans, who attended both Biden’s event last week and Harris‘ Burlington visit today, did not get the impression, however, that Biden was solely focused on the general election.

“I don’t get that feeling, no,” said Evans, after Harris’ health care roundtable concluded Monday morning.

Evans, attending the event with her grandson, who will be old enough to cast his first vote in the 2020 election, said she appreciated that Biden spoke to the importance of a president’s integrity in office.

“Joe Biden talked about something that’s near and dear to me, and that is bringing the integrity back to the presidential office, to the executive office,” Evans said, as she waited for her grandson, who was attempting to get a picture with Harris. “We need a president who communicates with us well, and doesn’t do what appears to be off-the-cuff, electronic social media … They need to be able to be the voice of our country so that there’s integrity. That spoke loud and clear through Joe.”

Biden spoke to an audience of more than 300 people in Burlington about the dangers of President Trump’s divisive language and hateful policies.

“In both clear language and in code, this president has fanned the flames of white supremacy in this nation,” said Biden, only a few days removed from the mass shootings in El Paso, Texas, and Dayton, Ohio, that left 31 people dead. “His low energy, vacant-eyed mouthing of the words written for him, condemning white supremacists this week, I don’t believe fooled anyone at home or abroad. The energetic embrace of this president by the darkest hearts and most hate-filled minds in this country say it all.”

Though the speech was largely thematic, calling for the country to “stand against hate,” the former vice president squeezed a couple policy proposals into his remarks.

“I can tell you, as the guy along with Sen. Dianne Feinstein who got the assault weapons ban and the high-capacity magazines ban in this country for 10 years, if elected president, we will do it again. We will do it again,” Biden said, to the largest applause of the afternoon.

“He did say in the beginning, ‘I’m not going to give the speech I had planned today because of what happened,’” Giehl said. “So, OK, I’ll forgive him that. But I didn’t really want to spend the whole time talking about that asshole that’s in the White House.”

The latest Des Moines Register/Mediacom/CNN Iowa Poll, released in June, put Biden at the top of the 20-plus candidate field with 24% support among likely Democratic caucusgoers. In March’s Iowa Poll, before Biden officially was in the race, 27% of poll respondents said he was their first choice for president.

For Jeff Heland, of Burlington, “It was difficult to hear somebody so graphically describe where we are. It doesn’t make me feel good,” he said, as Biden greeted a line of people waiting to say hello and take his picture. “It wasn’t a feel-good speech. It was not an uplifting speech. That was a, ‘We can do better and we will do better.'” 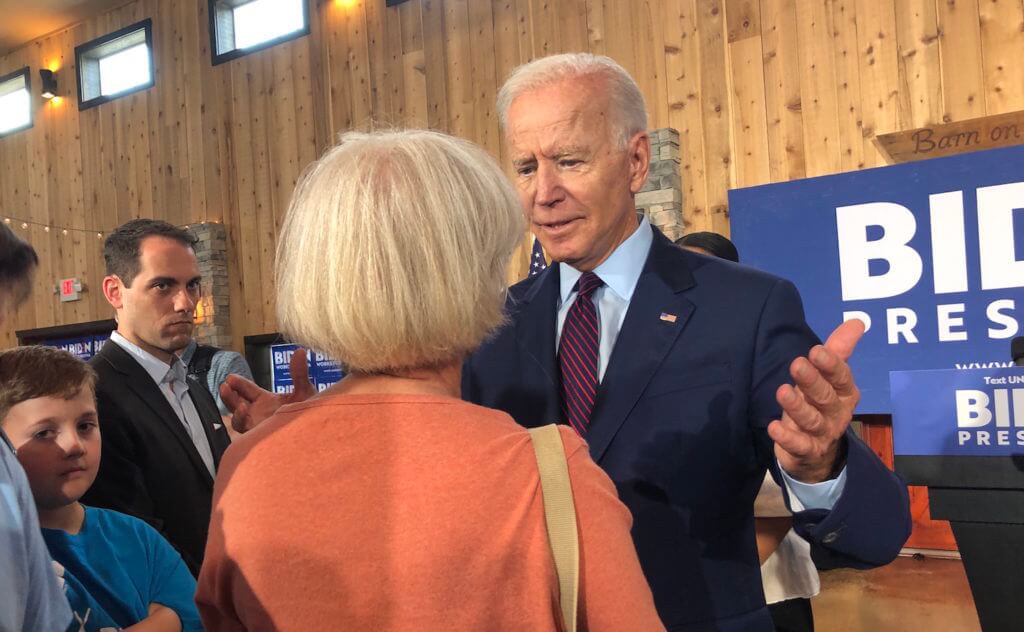 Heland’s wife, Cindy, agreed, but felt “what he said was kind of a necessary evil. I think it’s what a lot of people have to hear right now. It’s on all of our minds.”

“I’ve always thought a lot of Joe,” she said.

Des Moines County, of which Burlington is the largest city, will prove a critical barometer for presidential candidates. Long a Democratic stronghold, the Mississippi River county flipped for Trump in 2016 after supporting former President Barack Obama twice, and decades of Democrats before him.

For Biden and Harris, this was the first time they campaigned here in the 2020 cycle. Former Maryland Congressman John Delaney and Pete Buttigieg, the mayor of South Bend, Indiana, also will visit Burlington this week.

At a town hall Sunday night in Mount Pleasant, Harris also drew a crowd north of 350 people, in a historically red county west of Burlington.

“I think we all know this is an inflection point in the history of our country,” said Harris, on day four of her “river to river” bus tour from Western Iowa to its southeast corner. “This is a moment in time that requires each of us as individuals, and collectively, to look in the mirror and ask a question. That question being, who are we? And I think we all know part of the answer to that question is, ‘We are better than this.'”

“And so this becomes a moment in time that we must fight for the best of who we are, and fight, of course, we will.” 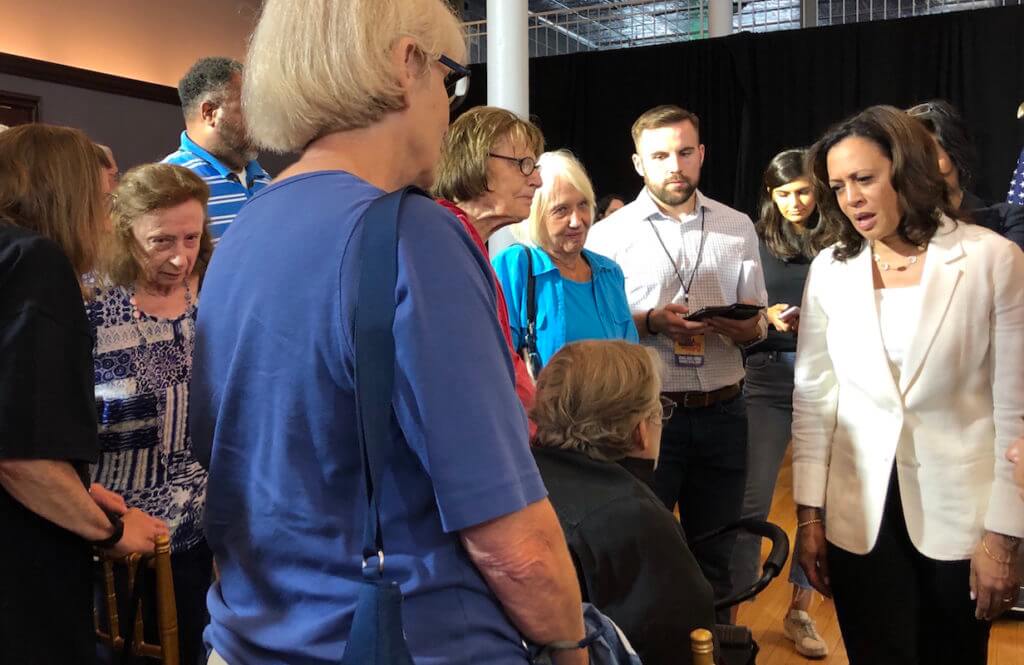 Harris, who typically polls in 3rd or 4th place in Iowa, often is named in the top tier of Iowans’ list of candidates they are considering ahead of the February caucuses.

Particularly in the wake of two Democratic debates this summer, Harris appears to have caught on among voters who didn’t know much about her when she first entered the race in January.

Her remarks in Mount Pleasant and Burlington were largely introductory, weaving together a bit of her personal story with the policies she would enact as president.

At the health care forum in Burlington, Harris told the audience about her mother, a breast cancer researcher, who herself died of cancer. She pitched her health care proposal, which allows Americans to choose whether they want to be covered through Medicare or a private insurance plan.

And in Mount Pleasant, Harris decried the Republican-led tax cut bill of 2017; proposed raising teacher salaries; and called on the Senate to pass a universal background check bill.

“After getting elected — because I fully intend on getting elected — I will give the United States Congress 100 days to pull their act together on this, and put a bill on my desk for signature,” Harris said, at Iowa Wesleyan University. “If they do not, I’m prepared to take executive action to require a comprehensive background check; to require that the ATF take the licenses of gun dealers who violate the law; and an executive action to put in place a ban on the importation of assault weapons into our country.”

Harris’ policy checklist is part of her ongoing strategy to introduce herself to voters who may have read about her at high-profile Senate hearings, but largely have gotten to know her through television appearances and performances on the debate stage.

“She was one of my first choices,” said Cindy Green, of rural Johnson County, who saw Harris in Mount Pleasant and intends to see Buttigieg Wednesday in Burlington. “When she came out of that first debate, my daughter and I called each other and said, ‘I think we got it. I think we know.’ I thought, man, she shut everyone down.”

“Hey guys, you know what? America does not want to witness a food fight, they want to know how we’re going to put food on their table,” Harris said, at the first Democratic debate in June.

“I’ve still been following her,” Green said, who also is considering Buttigieg and Minnesota Sen. Amy Klobuchar. “She’s still one of my top.”

“I don’t want somebody — like I told my grandson going out the door, ‘You don’t want grandma or grandpa running for president.’

“It’s an age thing,” she said, noting a couple of Biden’s recent gaffes (mistaking the cities that suffered recent mass shootings and confusing the timeline of the Sandyhook and Parkland school shootings). “I like him, he’s a nice guy. He did very well with Obama. That was just fine, but he never did win on his own.”

Mary Shy, of Mount Pleasant, said Harris was in the running for her caucus vote, along with Massachusetts Sen. Elizabeth Warren, Sen. Klobuchar, former Texas Congressman Beto O’Rourke and Julian Castro, a member of Obama’s Cabinet.

“I thought she was very good, very good,” said Shy, who stuck through the event despite its long-delayed start. “She has good ideas, which, we haven’t seen any ideas for the last two years. I think she’s very strong and would do a good job.”

Whether Democratic voters support Biden, Harris or a myriad other choices, one message is clear: Beat Trump.

“We’ve got to beat Trump, and I just hope she keeps drilling on that like she has been,” Green said.

“I don’t care who the Democrats put up as a candidate,” said Mabel, at Biden’s Burlington event. We’ve got to get rid of this guy.”