Explaining his entrance into the crowded field in a June 23 video on a campaign website few knew existed, word of the then-24th Democratic candidate slowly spread through political journalist Twitter. No major profile pieces, media roll-outs or cable news tours accompanied it.

Sestak had arrived in Iowa the day before, telling only a handful of former campaign and congressional aides three days ahead of time about his plans. He worked with an old acquaintance from Iowa to build his presidential website.

Unbeknownst to any media, Sestak’s first stop was to Antioch Baptist Church in Waterloo that Sunday morning. His inaugural public event, later that evening at the Sullivan Brothers Veterans Museum, came mere hours after anyone realized he was running. A few reporters quickly got up to it in time because there were literally no other candidate events in Iowa that day. Sestak’s local turnout that night was one short of the number of Sullivan brothers.

His campaign since has been exceedingly low-profile, though it’s not like a former two-term congressman from Pennsylvania who started late in the race was going to get a ton of national attention.

What Sestak has done, however, is show up everywhere in Iowa. Literally, everywhere.

In fact, since arriving in the lead-off caucus state on the first day of his candidacy, he hasn’t left. Sestak has been in Iowa for 36 days straight, meaning he has surpassed every single other Democrat in the amount of time spent in the state this year.

“We’re camping out, we’re not moving,” Sestak told Starting Line in an interview on Saturday. “We’ve got a great group rate with the Econo Lodge. They love us.”

Last week, he attended a meet-and-greet with the Linn County Democrats, the third time he’d been to the state’s second-largest county. About 150 people were there, and when Sestak asked how many of them had already seen him, half the room raised their hands. Nearly all the rest said they had at least heard of him.

“The reception is Iowa Nice,” Sestak said. “I think we’ve gotten decent exposure. We know the situation we’re in.” 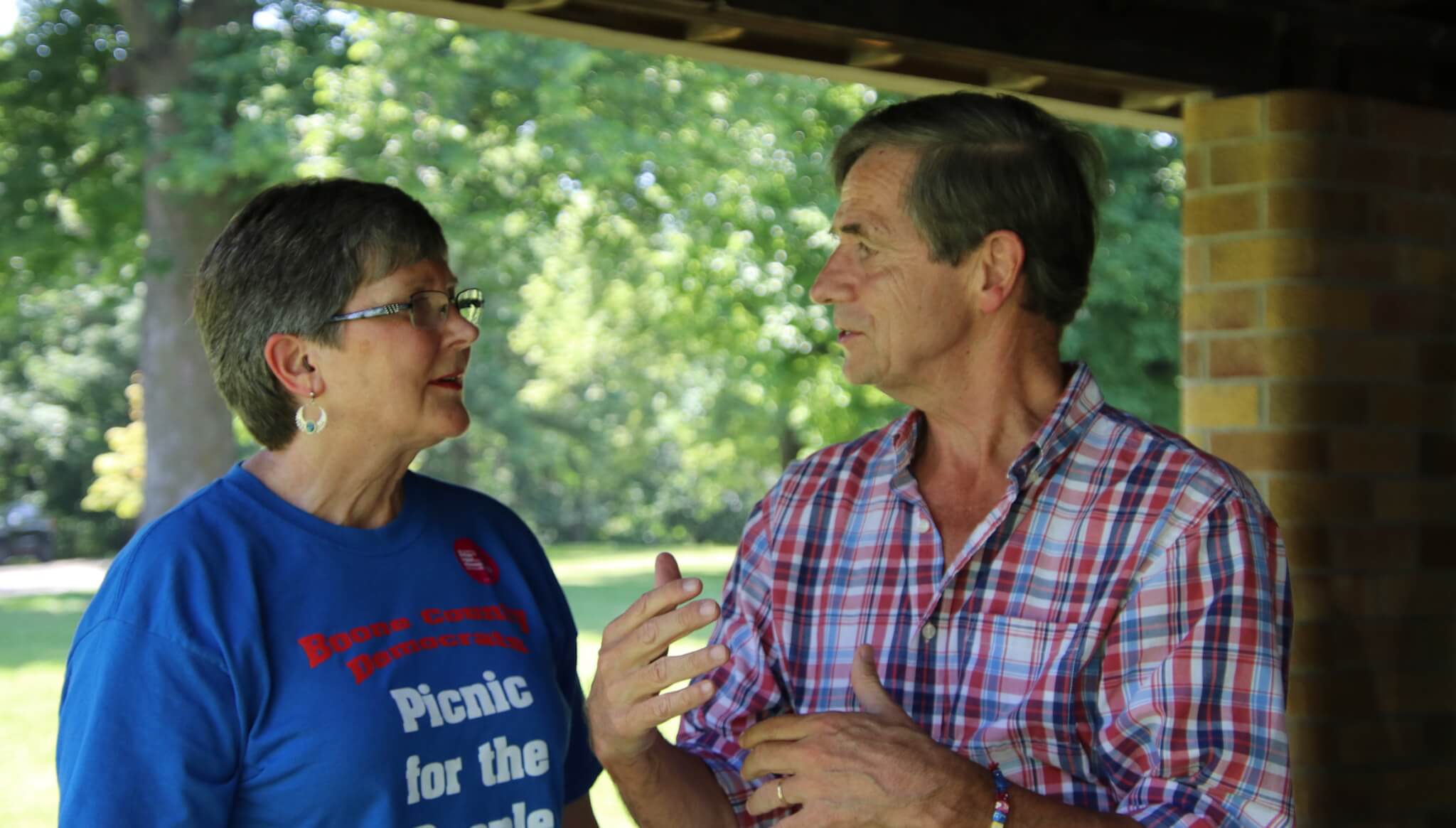 Part of how he’s gotten his name out: brochures. Tens of thousands of them.

Sestak and his campaign estimates they’ve pass out between 4,000 and 6,000 campaign fliers a day in Iowa. One man attended Sestak’s stop in Linn County because he’d gotten one placed on his windshield. An hour after he’d taken it off, another one replaced it.

“It’s an inexpensive way to do it,” Sestak explained. “And I understand, you don’t win elections with it, but you sure gain a little bit of attention. So, when they eventually see me on the air or something, they’ve already seen it.”

But where did he find supporters to help with that? It was a few weeks before Sestak’s small crew of campaign staff arrived in Iowa. No one really knew who he was yet.

So, he improvised — by recruiting homeless veterans.

“The first day I got here, I didn’t have any volunteers, so I asked where there’s homeless veterans places,” Sestak said. “I like to go to them, they’ll always help. For the first week or so, that was my supporters. I needed people to go to parades and do things. We recruited them, paid them some money, invited them here, plus bought them lunch and dinner.”

And with that, the Sestak presidential campaign was off and running.

So, too, was the candidate. He’s already been to seven or eight parades in Iowa, sprinting back and forth from either side of the route to shake hands and pass out brochures.

“Would you take me home tonight and read about me?” Sestak said he tells people. “And they chuckle.”

His campaign staff call him an “energizer bunny” and admit they can’t always keep up with his pace. They estimate that Sestak has shaken 25,000 hands so far in Iowa, and as a team they’ve passed out 50,000 brochures. 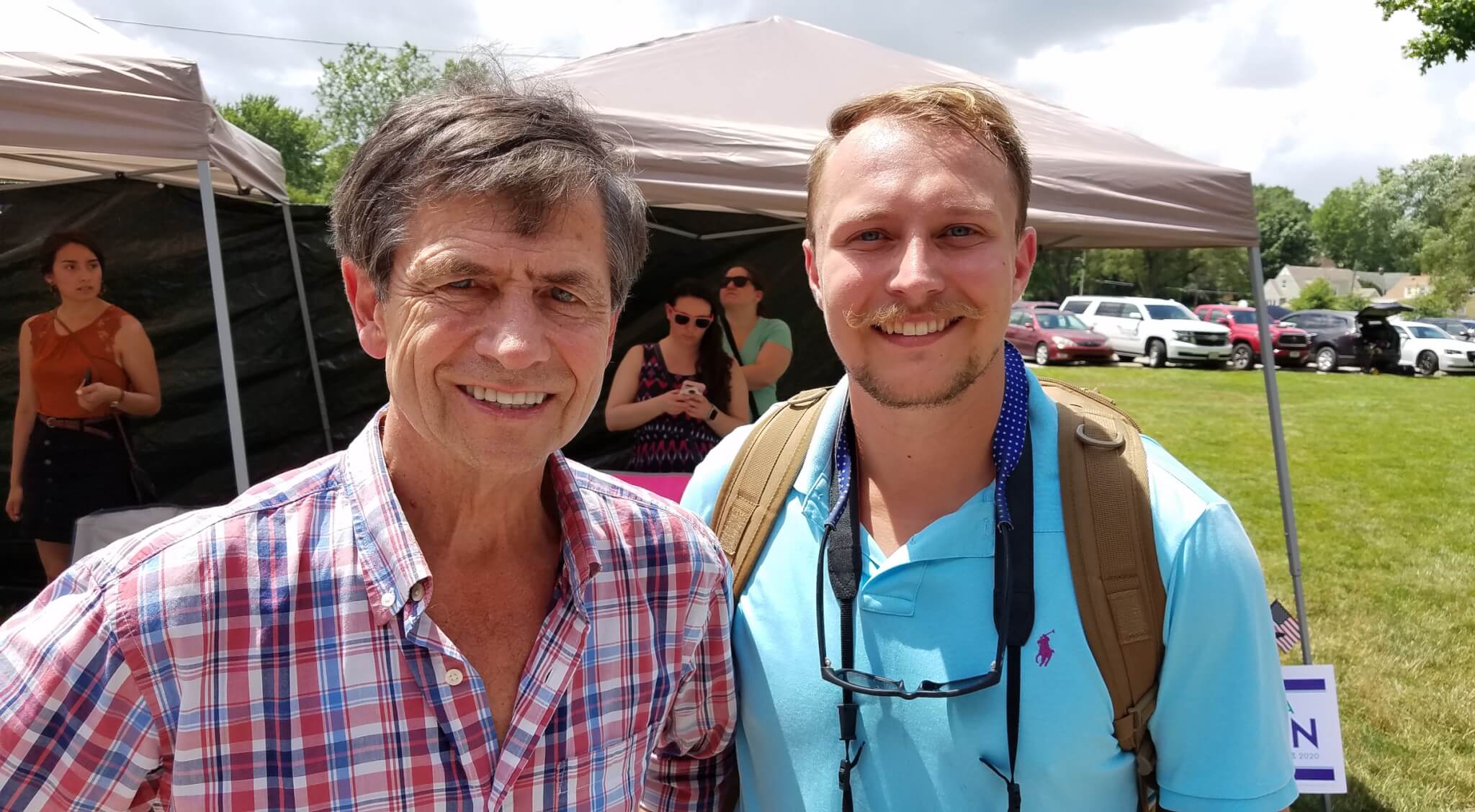 While Sestak’s campaign is officially headquartered in Alexandria, Virginia, the bulk of his small team – mostly younger men – is here in Iowa. Among them is a former intern from his congressional office and two staffers from past Senate runs (Sestak ran unsuccessfully for U.S. Senate in 2010 and 2016 – he defeated party-switcher Arlen Specter in the 2010 primary). All left jobs to quickly come out to help Sestak.

Due to his late entry, Sestak has run into difficulties. He got in too late to schedule an event with Central Iowa’s influential Asian and Latino Coalition group before they endorse, but he’s found ways to improvise.

At the Des Moines Econo Lodge he and his team stays at, Sestak has made friends with both the owner and the Latino construction crew that’s working on the building. The owner is going to introduce Sestak to Iowans at his local Hindu temple. The construction workers have been taking brochures to hand out, and they plan to take Sestak out to some events where a couple hundred Latino voters will be at.

“We chat with people,” Sestak said. “That’s the great thing about politics. You can ask to go to places.”

Sometimes, he just shows up. Sestak has popped up at a number of larger Democratic gatherings in Iowa, occasionally to the surprise of organizers. He wasn’t on the speakers list for the West Des Moines Democrats’ 4th of July picnic, but was there all the same. He didn’t throw himself into the large crowd of selfie-seekers or media scrum like Kamala Harris and Amy Klobuchar did, instead content to stand on the outskirts of the event, chatting up older attendees one by one. 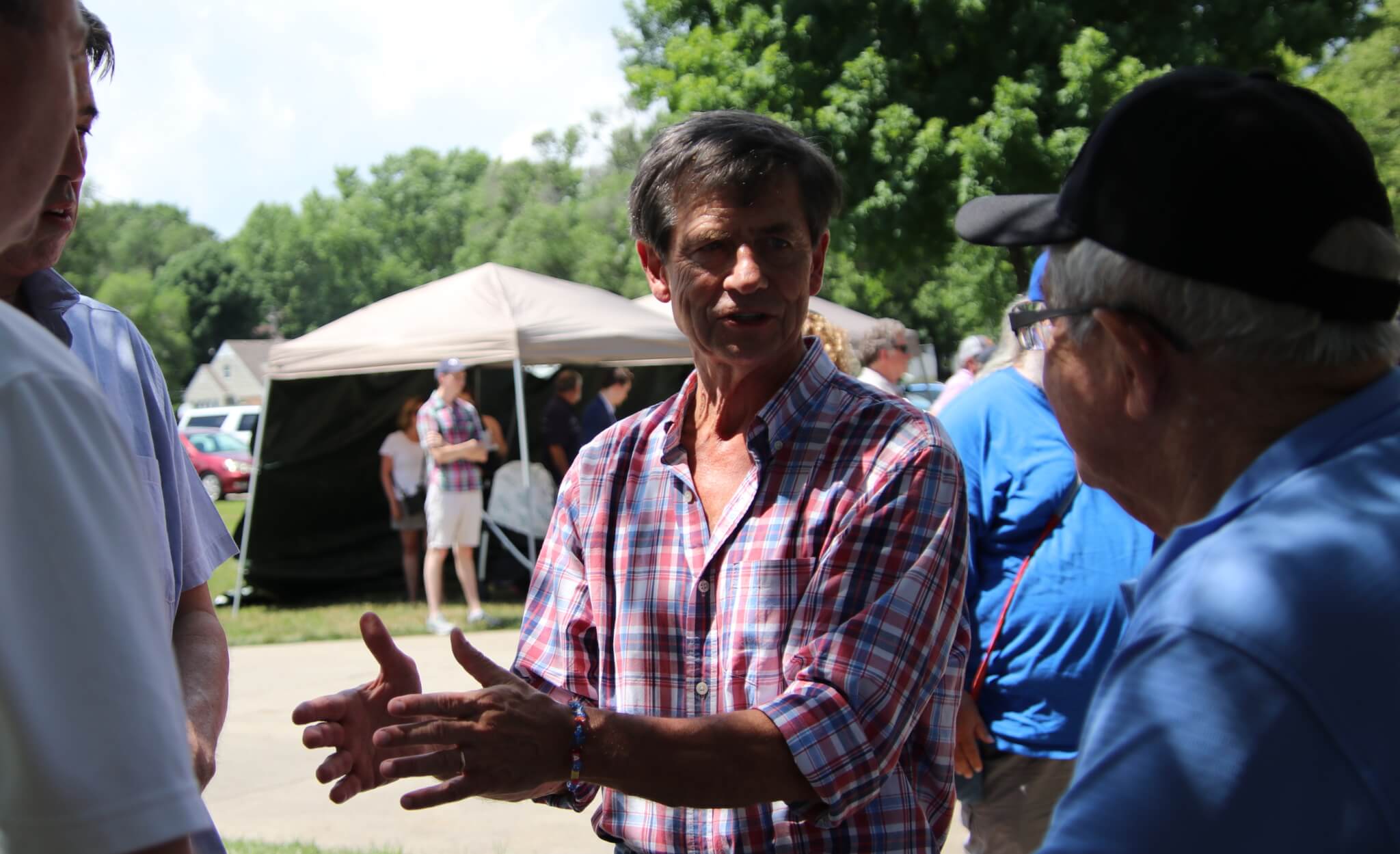 If it seems like an odd strategy, perhaps it is less so to Sestak, who has been successful with nontraditional approaches before.

“When I ran against Weldon, I just jumped in,” Sestak recounted of his first campaign in which he defeated incumbent Curt Weldon in a two-to-one Republican congressional district. “When I went to see the local Democratic Party chair in Delaware County, he said you’ve got to tell the DCCC. True story, I said, Delaware County Community College? What do they care?”

Still, he’s well aware of the challenges he face.

“I won’t get the [national] town halls like others,” he admits. “I have an email from one of the cable companies that they don’t know I have, saying don’t put Joe Sestak on. I have to break through that … We’re aiming for the Fall debates. If it’s not the first, we’d like to be in the second.”

While he’d been thinking about a presidential run for months, a health scare with his daughter, who developed a brain tumor that’s since disappeared, pushed back his plans.

“Slowly but surely, this is how it’s going to work,” he said. “Do I wish it was five months ago? Yeah. Is it? No. I landed on a beach and that’s the situation, deal with it. You don’t go back to the LCM and cry. Do I think the DNC rules should be about the money? No. But you get in, you play by the rules. You don’t moan about them.”

“I can’t be a tortoise, gotta be a bit faster than that,” he added. “But I can also be where [other candidates] aren’t physically.”

And when Sestak is physically in front of caucus-goers, he has a unique story to tell.

Sestak is certainly the only person in the field who can say things like, “When I arrived in the Arabian Sea with my carrier battle group to begin the strikes against Afghanistan…,” as he did at his first “Cup of Joe” events in Clive this weekend.

A retired three-star vice admiral, Sestak stood before a map of Iran on Saturday with a group of three dozen local Democrats and Chinese exchange students, explaining the dangers of abandoning diplomacy in the Middle East. 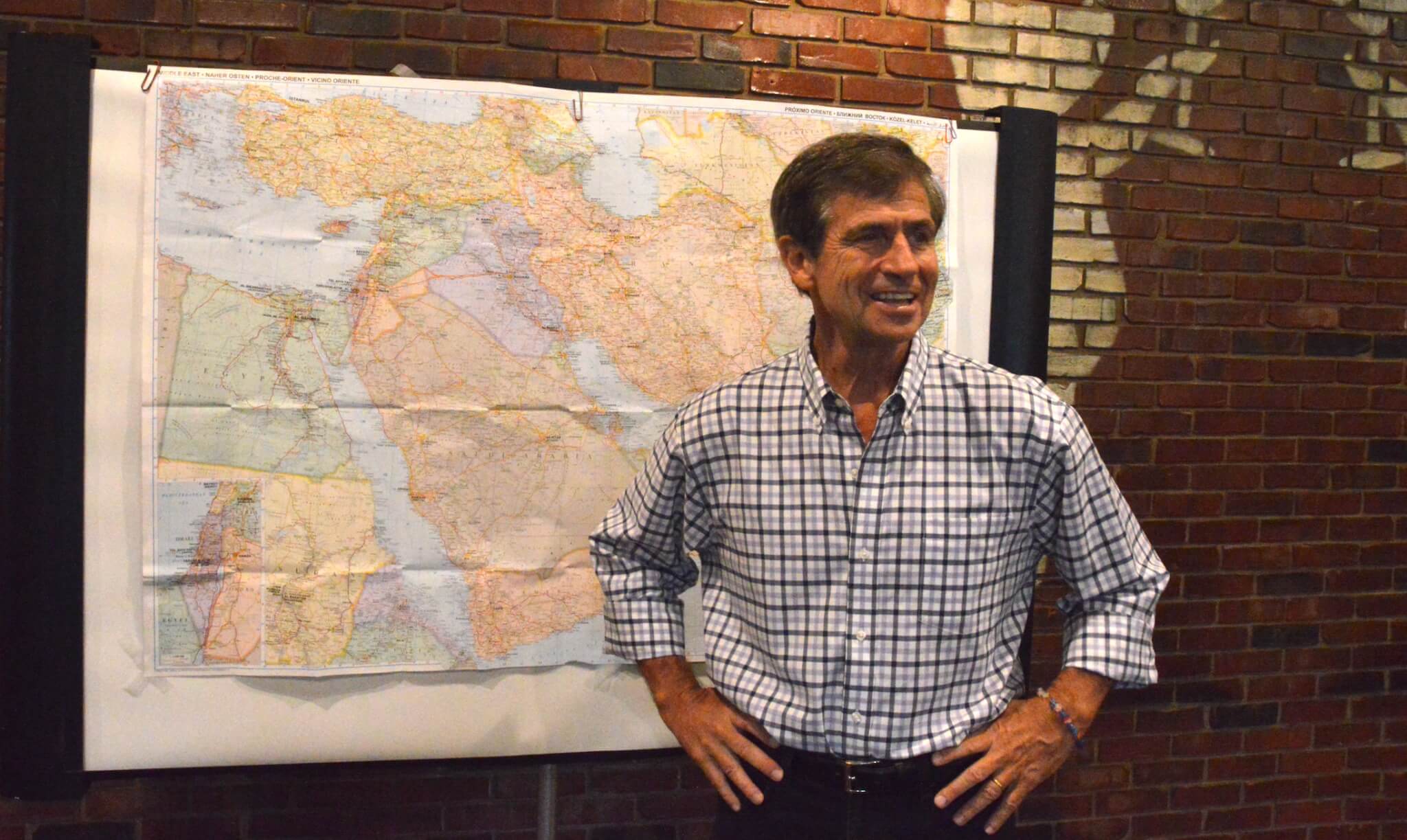 Whether anyone left a committed Sestak caucus supporter or not, they all certainly learned something. And, notably, Sestak has one of the more built-out policy sections of any candidate’s campaign website.

However, while Sestak’s profile is obviously focused on military service, his actual passion lies more with domestic issues.

“My real bread and butter as a congressman was not on foreign policy,” he explained after the event. “I only went to Armed Services, asked to get out of Intelligence, so I could move stuff like autism money in DOD. That’s where the money is. I knew that … The autism rate in military families is twice as high as civilians.”

The reason for that lies in his rationale to run for office in the first place, which he alluded to when asked by an attendee at his event what his most formative life experience was.

“The day they rolled my four-year-old child out of Walter Reed surgery,” Sestak replied.

His daughter Alexandra survived brain cancer at a young age. He left the Navy to care for her and, while in the hospital, met many families that didn’t have the same health care coverage his family did. He decided to run for Congress back in 2006 to expand health care access to more Americans.

Now, while out on the campaign trail, he wears a bracelet with his daughter’s name on it that she made while she was four, in between games of My Little Pony with her parents in the hospital room. 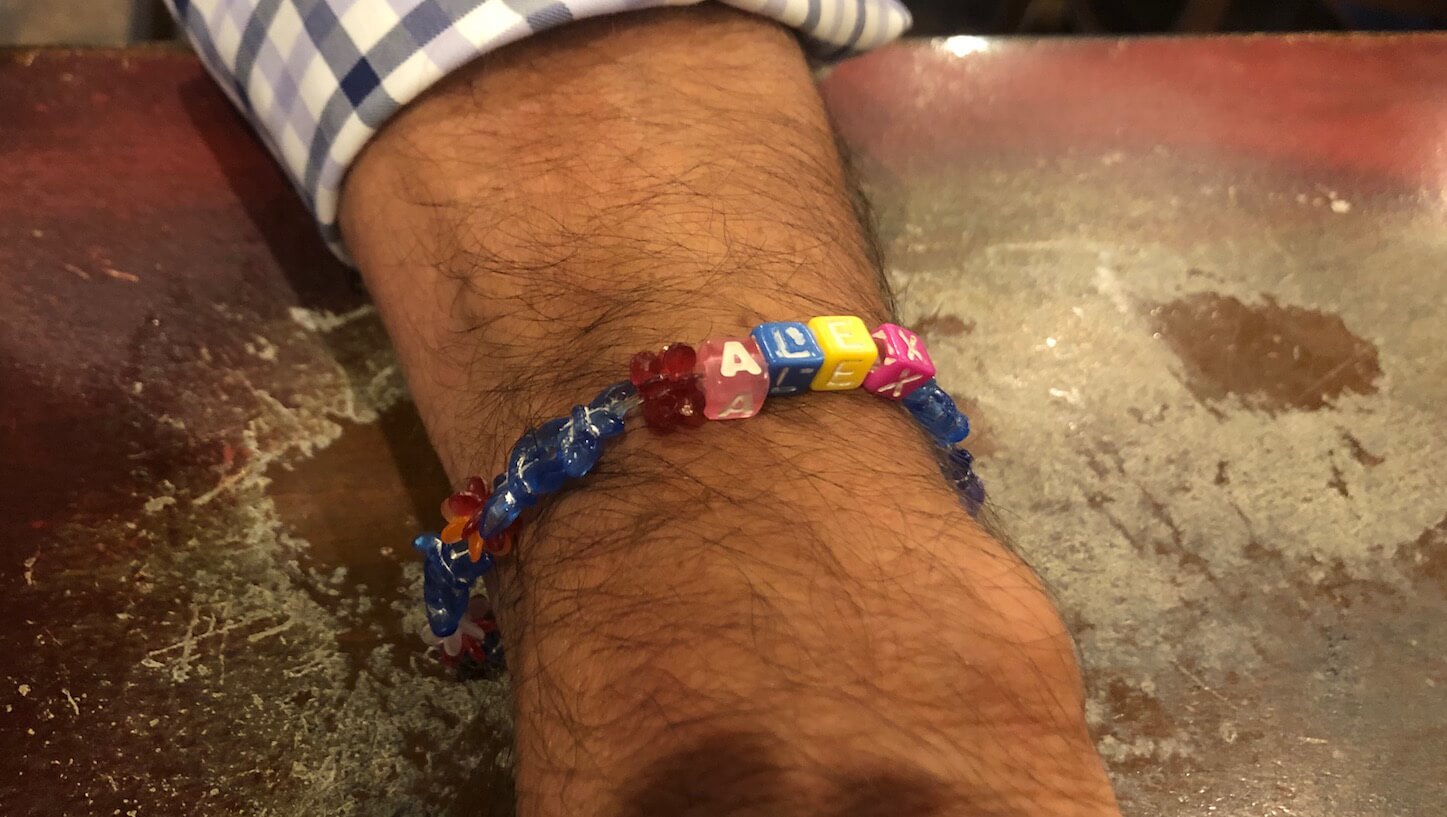 9 Comments on "The Peculiar, Surprisingly Effective Campaign Of Joe Sestak"