The Washington County Republican Party in Iowa took the lead of President Donald Trump’s racist smears on four Democratic congresswomen and ran with it last week, going a little further than their party leader. A Starting Line reader directed our attention to the post made on July 15.

“It certainly is time somebody called out The four Democratic terrorists for who they are,” the GOP county party from Southeast Iowa wrote on their Facebook page. “Very simply They hate America!”

[UPDATE: About half a day after Starting Line’s story, the Washington County Republicans edited their post to call them “incompetent Democrats” instead of “terrorists.”] 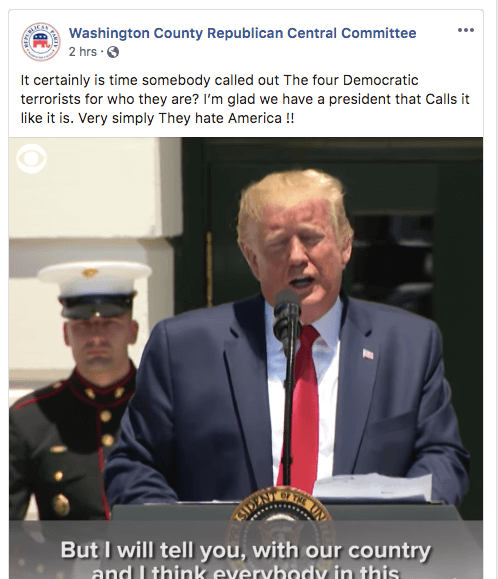 Labeling four female members of Congress as terrorists might be unusually inflammatory rhetoric in other times, but it’s becoming par for the course under Trump’s caustic presidency and for Republican Party leaders.

The Illinois Republican Party chairman publicly criticized the post, which has sent been deleted.

Trump has spent the better part of the past week and a half lobbing racist attacks upon the four Democrats, suggesting last weekend that they should leave the country and “go back” to the “crime infested places from which they came.” Three of those congresswomen were born in America, though it would have been a racist and xenophobic argument whether any were or not.

Tensions continued to rise after the crowd at a Trump rally last week chanted “send her back” while Trump stood at on stage, allowing the chant to continue.

Trump has since attempted to dodge criticism for the ugly scene, then reversed his course and embraced the people in the crowd as “patriots.” He continued his attacks on the four congresswomen over this weekend and into Monday.