Late to the race? Low name recognition? Steve Bullock doesn’t care if you’re writing him off; he’s running to fight for the written-off.

Bullock’s campaign is in full swing as he prepares for the next round of Democratic primary debates, one that he should be a part of and which will be his first crack at the national stage.

To establish a presence in Iowa, Bullock was on his sixth trip since announcing to the lead-off state, taking a tour of POET, an ethanol production facility in Gowrie, and stopping at a grain co-op in Rippey, Iowa on Tuesday. He also held a house party Tuesday night and is hosting four meet-and-greets throughout the day on Wednesday.

The governor seemed right at home talking to farmers and rural voters on Tuesday. Sporting a fresh pair of ‘gator-skin boots, Bullock talked ag and rural issues all afternoon, taking time to get a clear picture of the challenges facing Iowan farmers and rural areas.

“The challenges in Des Moines are gonna be different than the challenges here [Gowrie],” Bullock explained. “So, first of all, you’re not going to have a viable and valuable community if you lose health care. A quarter of the rural hospitals in our country are at risk of closing; so, we have to be investing in those hospitals. Same goes with education, and there’s disparities between the opportunities for our teachers in rural areas, and even recruiting them.”

“You’ve also got to recognize, in a town of 2,500 people, a company of six people – that matters,” Bullock said. “Sure, broadband is part of it, but we also need to invest in our overall infrastructure so that families can stay here.”

As he approaches his first debate performance, Bullock wants to make sure Democrats are shaping a message that includes rural voters and shows them the party is willing and able to protect their way of life.

“We’re talking about how you have opportunities in rural areas,” Bullock said. “How to make sure that nobody should have to leave their community, their church or their school just to have a decent job. I want to make sure the Democratic debate is actually not disconnected with the challenges people face.”

While Bullock believes he is a candidate who can win back rural area voters, he also said the Democratic Party should be competing everywhere and making sure people understand it is in their best interest to vote for Democratic candidates.

The governor mentioned that one third of Iowan counties voted Obama-Obama-Trump, noting that many of them believed Trump would work for their best interest. But with trade tariffs, ethanol exemptions and an abandonment of rural investment, Bullock sees an opportunity to make sure voters know electing Democrats is in their best interest in a plethora of ways. 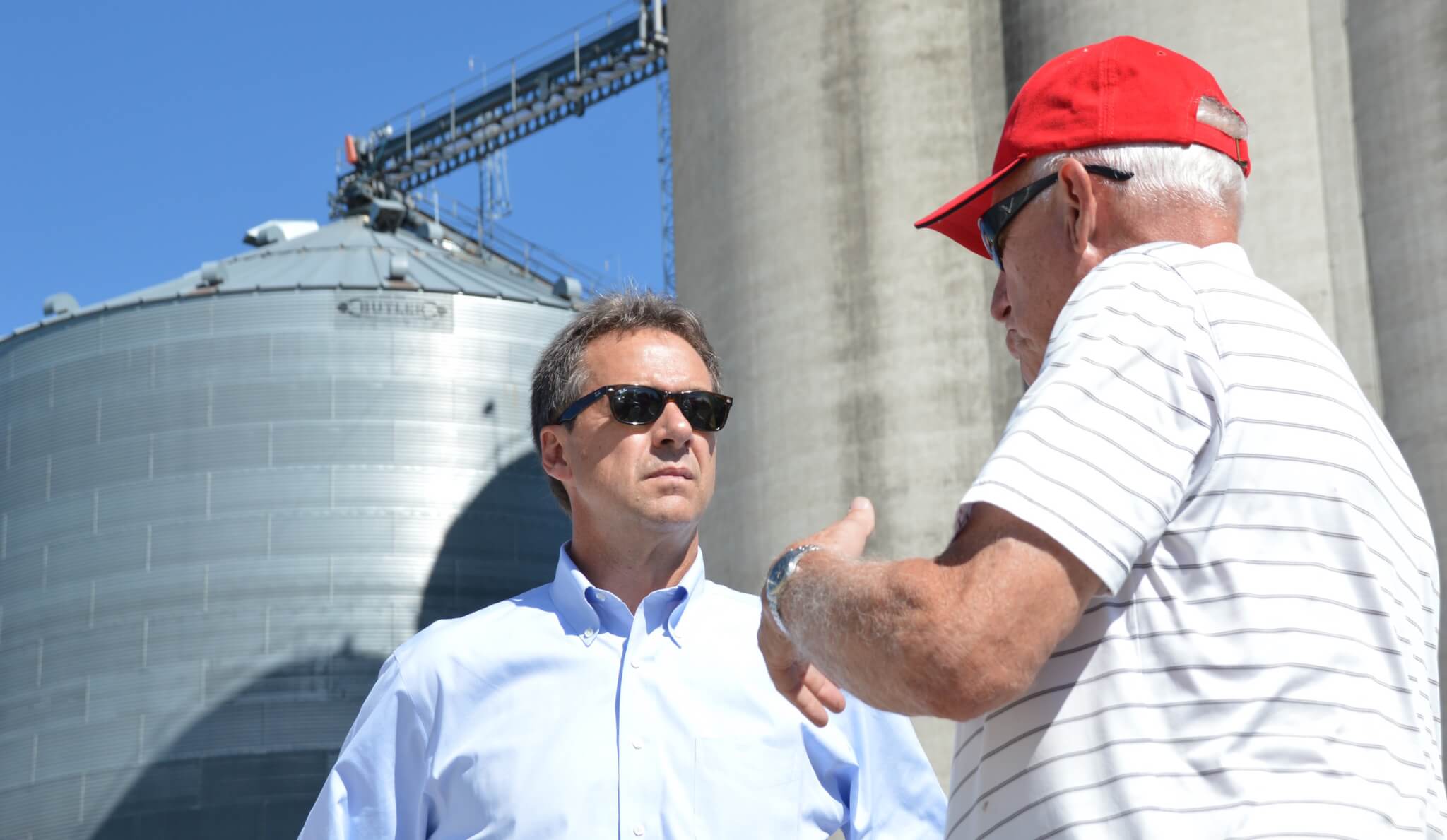 Bullock made it clear that he believes this is about more than just earning votes and gaining seats. For him, fighting on behalf of rural America is an issue of protecting the dignity in the American way of life.

“Politically, if we [as Democrats] lose rural areas, that’s one thing,” Bullock said. “But if we [as a country] lose the opportunity for families to make a decent living in areas like this, we’ve lost the heart of America.”

Listening More Than Talking At A Co-Op

After his ethanol tour, Bullock took a good chunk of time to stand around talking with a group of farmers in Rippey, Iowa. A few farmers gave detailed accounts of their recent struggles, notably that profit margins are shrinking, or disappearing completely, and that Trump’s foreign policy strategies hurt them in urgent fashion.

During the discussion, one farmer told Bullock, “Every time Trump tweets, it hurts what I’m able to provide to my family.”

Another farmer talked about struggling to just break even on an annual basis, noting that anytime there’s a rise in the markets, he doesn’t see any of the money because operational costs go up with prices of equipment, seeds, chemicals, fertilizers and health care.

“Our fixed costs just go up. Every time we get a bump in the market – like in the 2012 and 2013 area – the suppliers take every bit of it; all of the inputs just went up as the market rose,” he explained. “I’ve got two boys. I have a senior and sophomore in high school and I know one of them wants to farm; I honestly don’t know if I want to encourage that with the way things are going.”

Governor Bullock noted in a car ride conversation later with Starting Line that he prefers to listen more than talk at these kind of gatherings. His staff had to pull him away from the lengthy discussion with the Greene County-area farmers.

Much of Bullock’s central messaging in his campaign is that he’s the only Democrat in the race that won a deep-red Trump state, in large part based on his ability to win over rural voters. If he’s to perform well in the Iowa Caucus, conversations like the ones he’s had on this trip may help build a rural base to put him into contention on caucus night.