Montana Gov. Steve Bullock had most of Eastern Iowa to himself this Fourth of July as presidential candidates fanned out in cities around the state to meet Iowa voters.

Bullock, one of 24 Democratic candidates running for president in 2020, began his day Thursday morning in Cedar Rapids at the Fifth Season 5k.

From there, he headed east to Clinton’s Fourth of July parade along the Mississippi River.

He was joined on the one-mile route by more than a dozen supporters with signs and a large blue banner.

He was joined on the parade route by Rita Hart, a candidate for Iowa’s 2nd Congressional District, who used to represent Clinton County in the Iowa Senate. State Rep. Mary Wolfe, who currently represents the Clinton County area in the Iowa Legislature, also walked the route. 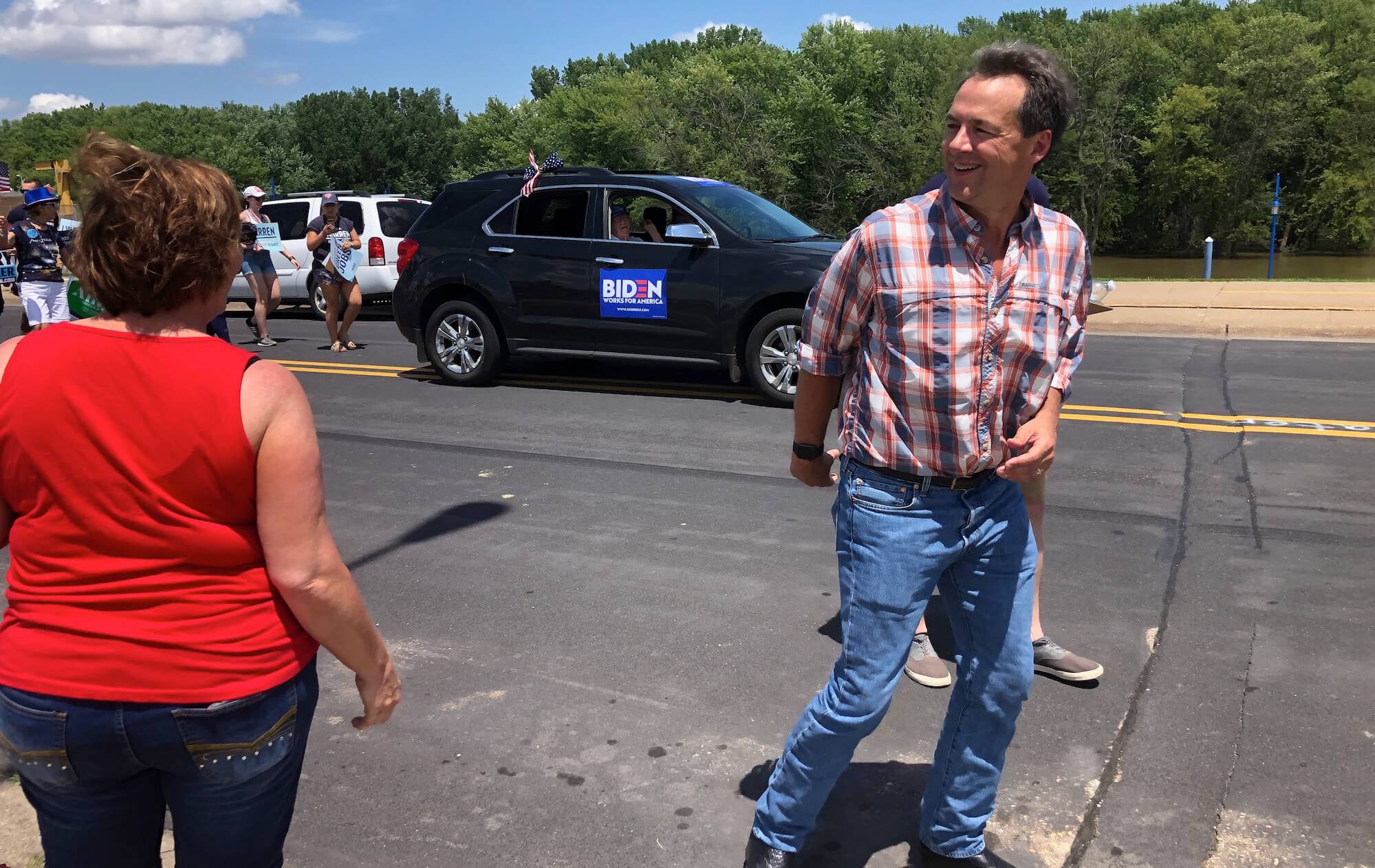 The governor stopped to shake dozens of hands while walking down the street, introducing himself as the governor of Montana and a candidate for president.

Chants of “I-O-W-A, Governor Bullock all the way” and “Believe in Bullock” were led by his supporters decked out in “Bullock 2020” t-shirts as the sun bore down.

Bullock’s day in Clinton and Jackson counties marked his fifth trip to the state since launching his candidacy about six weeks ago. Bullock was one of the later entrants to the 2020 race, as he worked through the conclusion of Montana’s legislative session.

“I’m the only one in this field that actually won in a Trump state,” said Bullock, at the Clinton County Democrats’ headquarters in Clinton. “When Donald Trump was on the ballot in 2016, he took Montana by 20 and I won by four.”

Bullock, 53, was first elected in 2012. Prior to his tenure as governor, he served as Montana’s attorney general.

His election in a largely Republican state could serve as a “lesson” for Democrats across the country, Bullock said.

“If we can bring out our base and win back some of the places we lost, if we can give people a reason to vote for us and our candidates, not just vote against Donald Trump, we will win again.”

While at the Democratic headquarters, Bullock was asked by voters about his absence from the first set of debates in June. One woman was hopeful he would be on stage later this month. Based on polling and fundraising, he is expected to join his primary opponents on the debate stage in Detroit, Michigan.

“I had to choose between health care for 100,000 people or chasing 100,000 donors — easiest choice I’ll ever make,” Bullock said, referencing the reauthorization of Medicaid expansion he shepherded through his state before hitting the campaign trail. 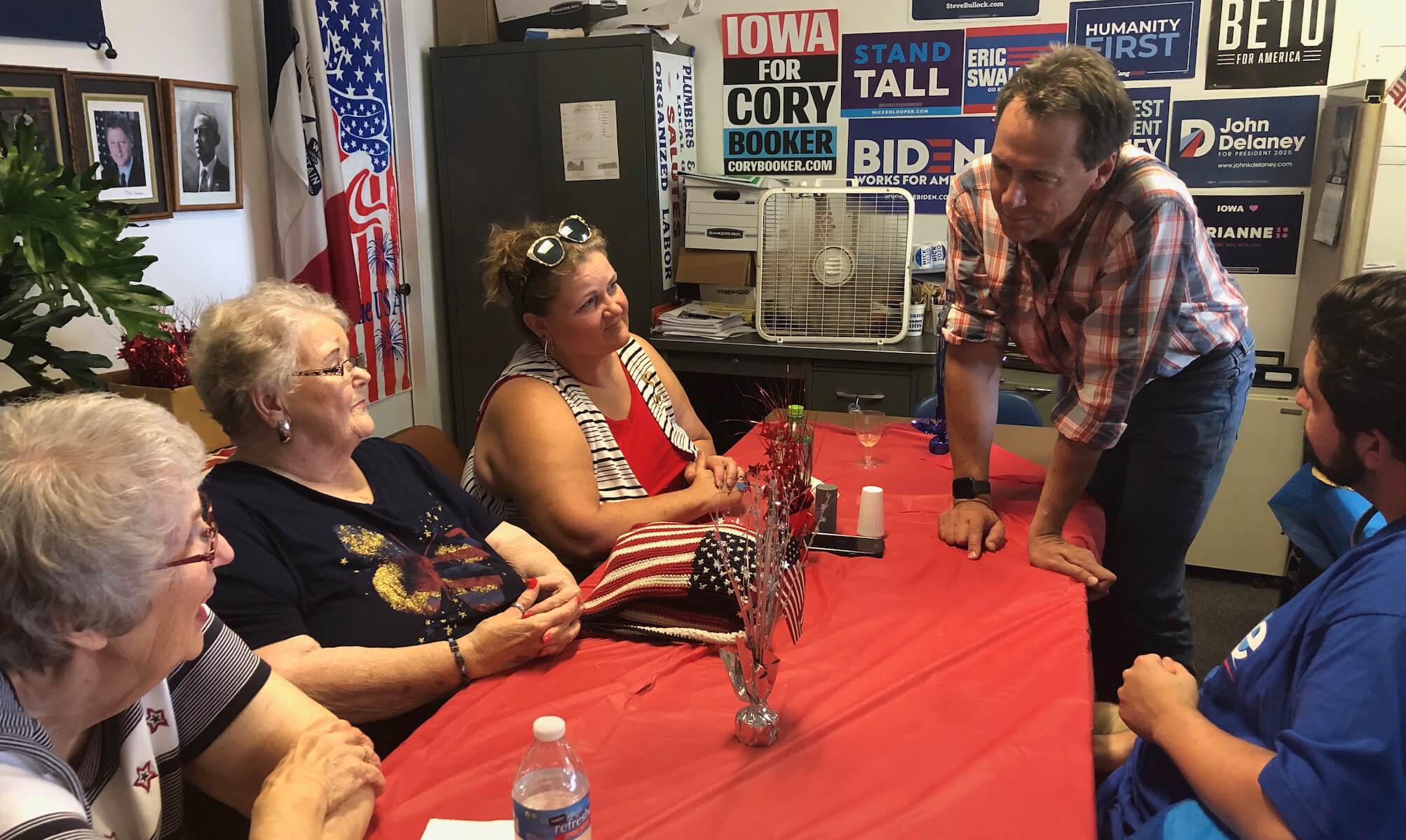 Making sure to campaign in every part of the state is part of Bullock’s pitch to survive a winnowing of the field that is the Iowa caucuses. He already has secured endorsements from two significant figures in Iowa politics: Attorney General Tom Miller and Jan Bauer, longtime chair of the Story County Democrats.

“On the one hand, you might think a town of 25,000 isn’t important, but if folks in Clinton don’t feel that they’re equally as important as folks in Des Moines, well then, in the general election we’re not going to win,” Bullock told Starting Line. “I think in part that’s what happened in 2016. There were parts of the country that just felt like the Democrats didn’t care about them.”

His last stop of the day was in Bellevue, where he attended the Bellevue Heritage Days celebration and mingled with locals at River Ridge Brewing downtown.

With an IPA — “Total Eclipse of the Hop” — in hand, Bullock winded down a long, hot day with causal conversation.

“D.C’s often become the place where talking has become the replacement for actually doing,” Bullock said, at River Ridge Brewing. “We’ve got to figure out the ways that we can actually get things done that impact people’s lives.”