We have a shakeup in Iowa.

Elizabeth Warren leads the pack in the Iowa Caucus, according to a new poll out this morning from David Binder Research, currently earning the support of 20% of likely Democratic caucus-goers. Kamala Harris and Joe Biden are both within the margin of error with Warren for first place, but they trail just slightly at 18% for Harris and 17% for Biden.

Bernie Sanders has fallen to fourth place in the polling, sitting at 12%, while Pete Buttigieg has 10% in the survey. Amy Klobuchar and Cory Booker round out the the field with 4% and 2%, respectively, while everyone else is at 1% or below.

It’s a troubling sign for Biden, who has been on a steady decline in most national and state polling lately. All the momentum seems to be with the two most prominent female candidates at the moment, in part thanks to strong performances in last week’s debates.

Some national polling has shown Harris leapfrogging Warren in the standings since they took the debate stage, but Warren’s large field operation and her frequent trips here may be helping her stay up on the competition in Iowa. Harris just expanded her Iowa operation significantly at the start of this month, allowing her to possibly lock in support from all the new excitement she’s seeing. She spends the next three days in Iowa, and the response Harris gets here should be telling.

The poll was commissioned by the Focus On Rural America organization, which has been running quarterly polls on the Iowa Caucus this year. It surveyed 600 Iowans by cell phone and landline right after the debates, between June 29 and July 1, and has a margin of error of no greater than +/-4.0%.

The July results show a major bounce for both Warren and Harris following their performance in the first round of presidential debates, while Biden continues on a steady decline. Warren has moved up 12 points since March, while Harris has improved by 9. Biden is down 8 points from the previous poll, and Sanders has dropped by 5. 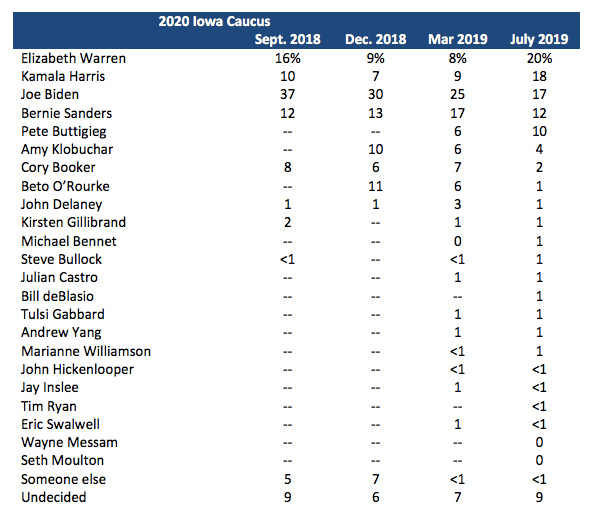 The debates appeared to have had a major impact on how Iowans view the current race. Of those polled, 63% said they watched all or some of last week’s debates, and 26% said it had “quite a bit” of an impact on how they view the race, with 37% saying it had “some” influence on their choices.

Overall, 34% said they were now considering Harris because of the debates, while 16% said Warren and 11% named Buttigieg. Julian Castro also made some headway, with 6% responding that they were now thinking about supporting him following the debate.

Interestingly, when candidate support was broken down based on who watched all or some of the debate, Harris leads that group, with Warren close behind. Those who did not watch and who also heard little to nothing about the debate support Biden and Sanders more strongly, with Harris at only 4% there.

That’s likely more bad news for candidates like Biden and Sanders, who seem to be losing support from people who are more tuned in and engaged in the race.

Meanwhile, there appears to be room for growth for several candidates whose favorability numbers have jumped. Warren, Harris and Buttigieg all earn positive opinions by 80% or more of likely caucus-goers, and it seems like Warren and Harris’ overall support is catching up to their favorables. Booker is close behind with a 77% positive rating, meaning he could easily move up in the rankings if he gets even the slightest breakout moment at some point here. 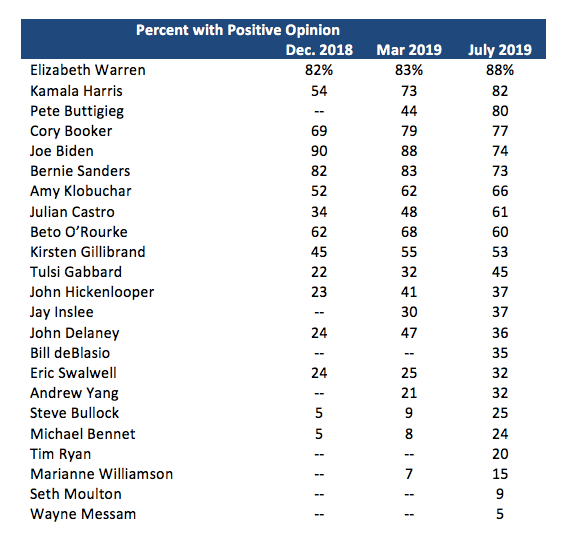 Several other candidates have seen their favorables improve significantly since the last poll, including Castro (+13), Tulsi Gabbard (+13), Michael Bennet (+16) and Steve Bullock (+16).

“I’m excited to see Iowans closely followed the first debate and will continue to work with the candidates to ensure they are engaging rural Americans in a meaningful way,” said Focus on Rural America Chair Lt. Governor Patty Judge. “Our poll shows that Iowans are paying attention and that they are prioritizing someone who can win rural America, because that’s what it will take to beat President Trump.”

Focus on Rural America has been encouraging reengagement with rural voters, and the polling data from this survey seems to show most Iowa Democratic caucus-goers agree. 51% said they prefer a candidate who prioritizes rural outreach, while only 30% said they want a nominee who prioritizes turnout in larger cities and towns.

The organization has also focused on biofuel issues, and the poll showed that 64% think the Trump Administration’s small refinery waivers for oil companies hurt Iowa farmers. Another 70% said they would be more likely to support a candidate who increases access to ethanol in order to reduce the country’s dependence on fossil fuels.

Finally, there were some interesting ways in which likely caucus-goers were willing to define themselves. Just 16% would call themselves a “socialist,” but 33% were okay with the “Democratic Socialist” label. And there must have been some overlap in those calling themselves a “moderate” (65%) and a “progressive” (67%).

Starting Line will have more coverage on other parts of this poll later today.