Foreign aid is often used more in political campaigns as a punching bag than as an applause line, but more Iowans may be pressing their candidates and elected officials on the subject if the ONE campaign is successful here.

ONE, a non-partisan advocacy organization co-founded by Bono, works to end extreme poverty and preventable diseases, particularly in Africa. They’re currently running a grassroots campaign in Iowa to get voters to contact their senators and urge them to support the Global Fund and to maintain America’s leadership in the global AIDS fight.

They have volunteers in Des Moines, Iowa City and Waverly, and are in the process of launching chapters at Drake University and Iowa State University. ONE will be present at the 80/35 music festival, as well as the Drake Global Health Consortium to connect and build a larger network of volunteers to reach out to senators.

“Over 700 million people are still living on less than $1.90 a day, over half of them in sub-Saharan Africa. This is an injustice with far-reaching consequences,” Sean Simons, press secretary for the ONE campaign, told Starting Line. “Whether it’s lobbying political leaders in world capitals or running cutting-edge grassroots campaigns, ONE and its millions of members across the globe are committed to ensuring that the voices of the world’s poorest are heard and that we shape policy solutions that help lift them and their communities out of extreme poverty.”

ONE consists of more than nine million people globally, about three million of which are in the United States, and 15,407 Iowans. They don’t do any fundraising from the general public, but rather are funded by philanthropists, charitable foundations and corporations.

“We believe the fight against poverty isn’t about charity, but about justice and equality,” their website states.

They instead focus on grassroots organizing, and a key ONE priority is fighting the AIDS epidemic.

“We’ve made incredible global progress against the AIDS epidemic over the past 15 years, but we still have a long way to go. AIDS isn’t a disease of the past, it’s still a crisis that claims 2,500 lives every day,” explained Simons. “It’s important for Iowa lawmakers like Senator Chuck Grassley and Senator Joni Ernst to stand up and speak out in support of maintaining America’s bipartisan commitment to the global AIDS fight.”

The Global Fund and the President’s Emergency Plan for AIDS Relief (PEPFAR) are two of the leading funds combatting AIDS and other preventable diseases, which ONE helps lobby on behalf of for funding. The Global Fund is due for a “replenish” in October of 2019, which ONE is working on now. The United States has made a commitment to providing $1 for every $2 of funding from elsewhere, but this may be changing under the Trump administration.

“We have the tools to defeat AIDS once and for all, but the only way we will win this fight is by continuing America’s strong bipartisan support for programs like the Global Fund to Fight AIDS, TB and Malaria and PEPFAR that save millions of lives,” Simons said.

Trump has publicly stated his commitment to fighting the AIDS crisis on multiple occasions – during the 2019 State of the Union and, more recently, at his 2020 re-election rally in Orlando – but his actions in office tell a different story.

Just weeks after his State of the Union, where he pledged to “defeat AIDS in America and beyond,” Trump proposed cuts to both the Global Fund (from $1.56 billion to $1.1 billion) and PEPFAR (from $3.85 billion to $3.4 billion).

“For decades, lawmakers on both sides of the aisle have supported measures that help fight extreme global poverty and preventable disease. It’s one of the reasons why America is a beacon to the world,” Simons said. “However, massive proposed cuts to America’s poverty-fighting foreign assistance programs — as this Administration has repeatedly proposed — betrays that bipartisan legacy.”

In the end, it will be up to Congress to vote on the funding for the Global Fund replenishing and to set the budget for the fiscal year 2020, which is why ONE works to put pressure on elected officials to prioritize their mission.

Below is a fact-sheet, courtesy of Friends of the Global Flight, on the potential impact of the cuts if passed. 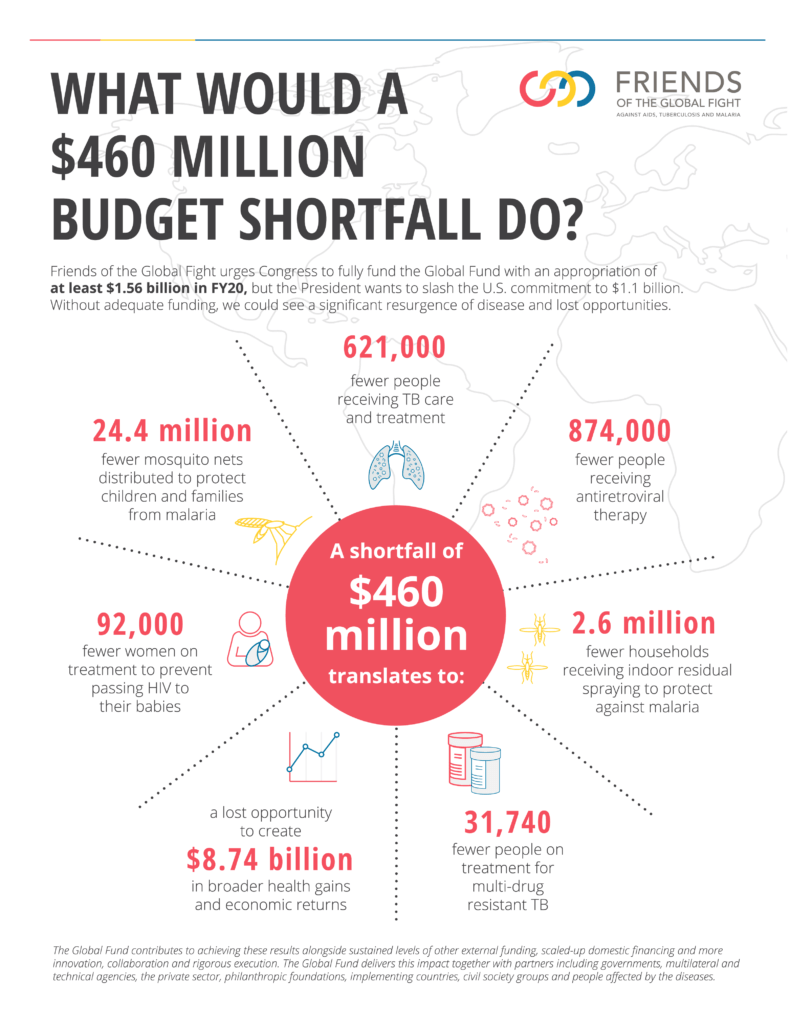 by Josh Cook
Photo from ONE campaign
Posted 6/24/19