State Representative Lisa Heddens was appointed to a Story County supervisor vacancy tonight, edging out four other finalists. Legislators cannot hold two elected positions at the same time, so she’ll have to step down from her seat in the Iowa House, which should cause a special election later this summer.

Heddens served in the Iowa House since 2003, and was a leader on Medicaid and mental health policy issues.

House District 46 will now open up, with candidates being chosen at special nominating conventions from both parties after the governor sets a special election date. The Ames-based seat is heavily Democratic, voting 57% to 33% in favor of Hillary Clinton over Donald Trump in 2016. Fred Hubbell carried it by an even wider 65% to 32% margin over Kim Reynolds in 2018. 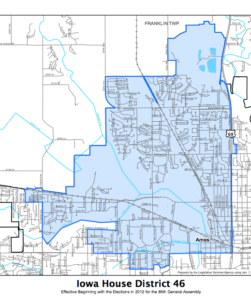 Democrats should face no difficulties holding on to the district, especially with the multitude of presidential candidates who can pitch in during a special election. That’s what happened in the state senate special election in Cedar Falls back in March, where Democrat Eric Giddens handily defeated a former Republican legislator. Still, it will take some resources to run the campaign.

The nominating convention for this district could be interesting to watch. Progressive activists, many of whom first got engaged during Bernie Sanders’ 2016 campaign, got heavily involved in the local county party in recent years, moreso than in many other Iowa counties.

Combined with younger activists at Iowa State University, Story County has become a stronghold for progressive politics in the state, especially at the county party level. It was one of the few counties where Cathy Glasson did particularly well in the county conventions during the gubernatorial primary back in 2018.

Special nominating conventions can often favor older, well-connected insiders who know all the long-time party regulars that make up county organizations. This situation could be much different.