If you’re on the hunt for a new pair of off-brand Crocs or high-end work boots, look no further than Ringgold County, Iowa. But for the county’s residents who are looking for anything in between, a 45-minute drive to Creston, the next county seat over, or an online shopping-spree are the only purchasing options.

As small towns everywhere wrestle with the effects of a struggling farm economy, aging populations, tough housing markets, and the explosion of online shopping, finding places to buy basic goods has become a challenge.

Ringgold County, situated on Iowa’s southern border with Missouri, has a population just over 5,000. The county watched as the Shopko in Mt. Ayr closed its doors on May 5, further cutting down their local selection and making it tough to buy one basic necessity in particular: shoes.

“It’s a nation-wide issue. These companies are just getting eaten up by Amazon,” said James Uhlenkamp, a board-certified English teacher who ran for the Iowa House in 2018. “The only way for people to get much beyond work-type clothes is to go to bigger places like Creston or Des Moines, or to go online.”

After a string of Shopko closings across Iowa, rural residents have a dwindling list of options for basic shopping needs. For those who can’t find what they need locally, many will head online to buy what they can. However, Iowa lags most states for internet coverage in the U.S., so buying certain goods becomes nearly impossible for those without a reliable internet connection. 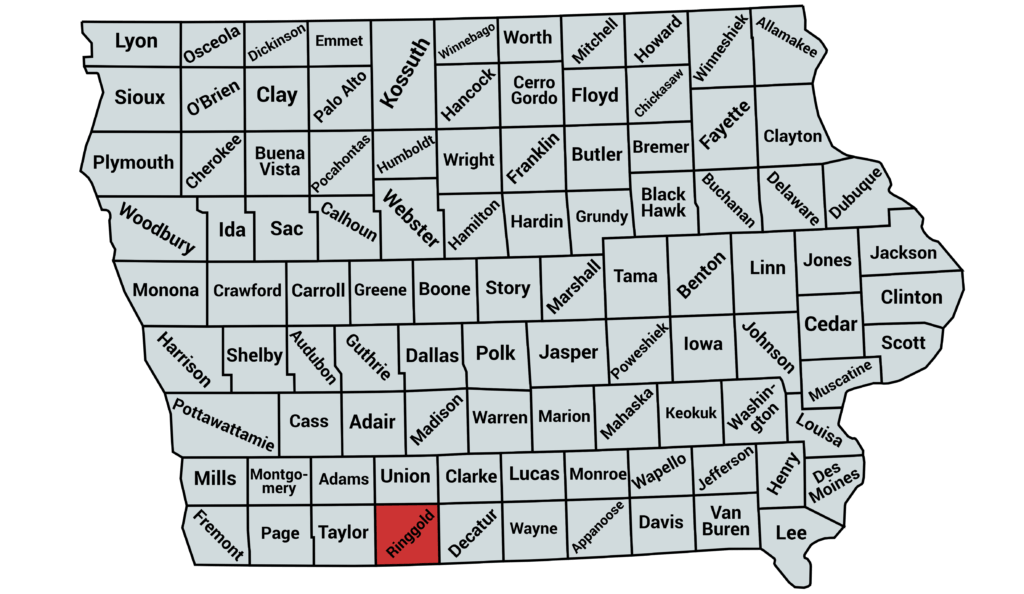 With companies like Amazon and Etsy providing cheap and easy ways to shop, stores of all types and sizes are struggling in rural areas everywhere, not just in Ringgold County.

“This doesn’t just hurt local economies but limits job and company creation, because how do you compete with them?” asked Uhlenkamp. “If we can’t come up with political solutions, we’re going to be seeing ghost towns all across Iowa, literally.”

The Des Moines Register reported that Shopko initially announced 39 of its stores would close back in December, but that number grew to more than 100 stores once the Wisconsin-based company and its affiliates filed for Chapter 11 bankruptcy on January 16.

Since then, the number seems to have kept growing as closures have spread across rural Iowa towns. For most of the basic goods everyone needs – food, drinks, working supplies – there are other options for customers in the local area through smaller groceries or market-specific stores such as farming co-ops or supply stores. Beside these selections, shoppers have flocked online to buy what they can’t find locally, which makes it harder for stores in their local area to come in and compete.

“I understand the convenience of Amazon, especially for rural people, because you can get exactly what you want and it’s here in a day or two,” said Kerleen Stephens, Superintendent of Diagonal Schools in Ringgold County. “I think Amazon has hurt retail everywhere, so why wouldn’t it hurt retail here?”

The Shopko closures have left a hole in rural Iowan towns, leaving residents in a tough spot. This is the case in Ringgold County, because Mt. Ayr held the only true ‘supermarket’ in the county.

Shopko provided Ringgold County with a one-stop-shop for basic needs and gave people from all over the county a nearby location to get groceries, prescriptions, boutique products, supplies, clothing, and shoes when needed. After it closed, though, there are just two places left to buy shoes in the entire county: Dollar General and the United Farmer’s Cooperative.

“I don’t know what the answer is to that,” said Stephens. “But retail is changing everywhere right now.”

A Laundry-List Of Problems

While the lack of options for shoe-shopping is a notable predicament, it’s representative of a slew of challenges facing Ringgold County and similar areas.

“Shopko also had a really active pharmacy. This is an elderly county, and the older we get, the more medicine we need,” said Stephens. “I always thought [Shopko’s] pharmacy had to be an asset to them, but Hy-Vee bought it and now they have a pharmacy trailer outside their store across town.”

With just one hospital and pharmacy in the county, both located in Mt. Ayr, healthcare access options are limited and centralized.

Housing is another big challenge for Ringgold County, especially in regard to recruiting people with companies, doctors, pharmacists, and other workers. When there are opportunities to move to the area for a job, it can often be tough logistically because of the housing market; lacking both new developments and nice properties ready to move into.

“It’s not just a jobs issue, it’s also housing,” said Uhlenkamp. “From an economic perspective, if I don’t have a place to live, I can’t move here or start a business or anything like that.”

In terms of the actual market, Iowa Realtor Wanda Hosfield said the market has performed quite well in the last year when a handful of properties have actually been listed.

“Any time we see nice houses go on the market there, they get bought up very quickly,” said Hosfield. “But there’s not a lot of listings because anything that pops up get purchased fast. Anything that’s on an acreage in Ringgold is drawing competitive bids, even if the house itself isn’t very nice.”

Hosfield cited a few homes of below-average condition that were bought at or above market listing because they were on nice pieces of property and were available.

A couple of the homes on larger acreages had multiples bids at market value submitted within a week or even a day of being listed, making it nearly impossible for folks to even travel and look at the home if they aren’t already close by.

For the people of Ringgold County, like other similar areas, there’s no clear path to increasing commerce, creating jobs, opening up the housing market or generating new opportunities for new companies.

What’s Up The Road

“I think it’s super important that entities, and individuals, patronize those local stores,” said Stephens. “They buy your yearbook ads, they support you, they donate to fundraisers … Amazon doesn’t do that, stores in Des Moines don’t do that.”

Understandably, many locals feel pressure to support one another and buy into their own local economy. But with close to zero options for buying locally-sold products – let alone locally-made products – what options do Ringgold residents really have?

“I can’t remember the last time me, or anyone in my family, drove to Creston or Des Moines to buy shoes. I can go online to get exactly what I want rather than driving an hour one way to maybe find what I want,” said Uhlenkamp. “It’s much easier, and ultimately cheaper, to buy online. On the micro level, it’s wiser for me, as a consumer, to do that.”

And while individual consumer behavior assuredly has an impact in this equation, there is a legal and political piece to the puzzle that impacts the housing markets, job opportunities, and overall community development.

“Something that plays into it is that we just had a big change in our assessment process, and property taxes are going to go up – too much in my opinion – but they’re going to go up,” said Hosfield. “We’re not sure how that will affect the market but it will have an impact of some kind.”

With property taxes set to rise, Uhlenkamp said increasing taxes isn’t necessary. Rather, the state needs to take better advantage of the revenue it already has.

“In terms of rural development, people say ‘Well, we don’t have the money for that.’ …Well, yeah we do,” said Uhlenkamp.

According to the Iowa Policy Project, big companies like John Deere and Monsanto receive Research Activities Credit (RAC) on their taxes each year for research they conduct in the state. The RAC payouts last year for Iowa totaled about $41.8 million.

“Why are we paying people for work they were going to do anyway?” asked Uhlenkamp. “It’s not that we need to raise taxes to develop rural Iowa, we need to just spend the money we have more wisely, but we have to want to do it.”