Joe Biden and Bernie Sanders are locked in a tie in Iowa atop the large field of Democrats running for the presidential nomination. An Iowa Starting Line/Change Research Poll of 615 likely Democratic caucus-goers that was conducted this past week, May 15 to May 19, found both Biden and Sanders garnering 24% among the Democratic candidates. The poll’s margin of error is +/- 3.9%.

Three contenders trailed the leaders with healthy percentages of support: Pete Buttigieg at 14%, Elizabeth Warren at 12%, and Kamala Harris at 10%. Beto O’Rourke came in at 5%, while Amy Klobuchar and Andrew Yang both had 2%. Everyone else polled at 1% or less.

In most national polling, Biden was blowing away the rest of the Democratic field in the immediate weeks after his announcement. A national CNN poll at the end of April had Biden up 24 points over the next closest Democrat; a Fox News national survey put Biden up 18 last week.

But here in Iowa, it’s a much closer contest for Biden. Part of that is due to Sanders’ residual strength here from his 2016 run and remaining volunteer network. In this survey, 45% of those polled who said they caucused for Sanders in 2016 list him as their first choice in the caucus. Given the expansive primary field, retaining even just around half of his former support in the caucus may be enough to get to a win.

“It’s clearly a very different outcome from our most recent South Carolina poll, where Biden leads among all demographic groups except 18-34 year olds; in Iowa he and Sanders generally split that vote,” said 2020 Change principal pollster, Jane Loria. “This is also a weaker result for Biden than our modeling (based on other polling we’ve done across the country) would have shown: that model would have had Biden up on Sanders by about 10 points or so.” 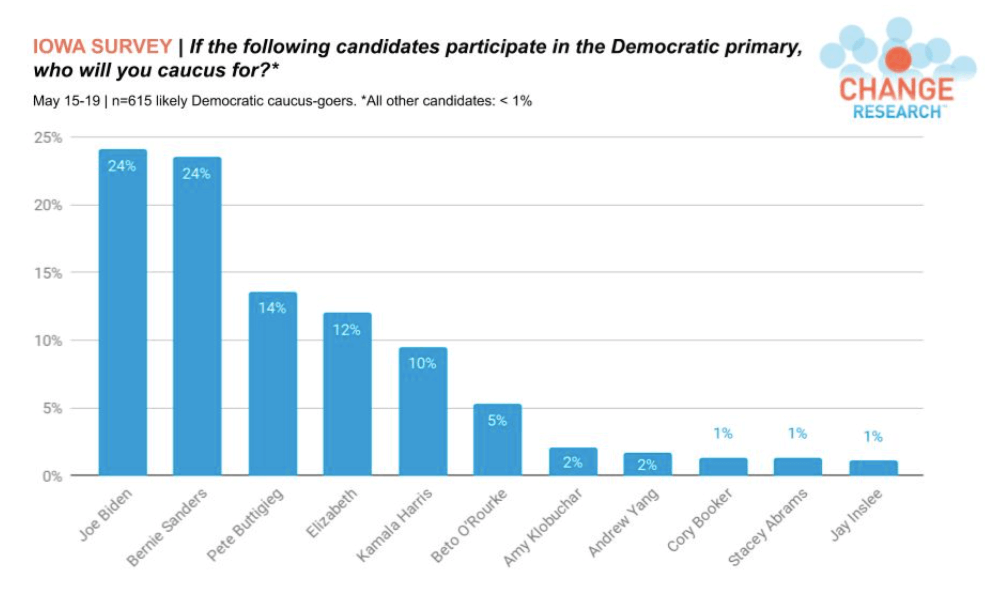 Biden, though, still polls well in most categories for Democrats. 37% of likely caucus-goers’ feelings were “very favorable” toward Biden. Only Warren (40% very favorable) and Sanders (39% very favorable) polled higher. Democrats view him as the most “likable” candidate – when asked to select five candidates who they viewed as likable, 67% included Biden in their choices (Buttigieg was second at 56%). And 71% selected Biden as one of the five candidates the respondents thought were most likely to defeat Donald Trump in the general election.

There were some notable divides on other fronts. Biden captured 34% of the Catholic vote. Sanders came in first with non-religious voters at 28%. Buttigieg’s support leans toward wealthier and the highly-educated. He came in second in the $100,000+ income bracket, winning 19% of that to Biden’s 24%. Biden dominates the group of Iowans who watch three or more hours of cable news a day, taking 46% of that.

The Iowa Starting Line/Change Research Poll is part of the 2020 Change series of polls, and was conducted online and is quite extensive. It’s obviously rather difficult to poll a field this large, especially when many caucus-goers like multiple candidates. Fortunately, Change Research asked several questions where poll-takers could pick up to five separate candidates for specific questions. That produced some insightful results.

Here’s the many other interesting findings, including plenty of good news for several candidates who didn’t top the horserace question.

If you read the rest of the poll before looking at the horserace numbers, you might think that Warren would come in first or second. She scores top marks among Democratic caucus-goers on a number of fronts. Warren gets a 40% “very favorable” rating, higher than anyone else. Combining her “very favorable” and “somewhat favorable” numbers puts her at 78% favorable, a significant jump ahead of Sanders’ next-closest 71%.

“Good news for Elizabeth Warren: her favorability exceeds that of any other candidate in the race and her name recognition is near universal,” Loria observed. “In some states, we see a large spread between the front-runners and the so-called second-tier in the excitement barometer, but in Iowa the candidates are all pretty tightly clustered. When we ask respondents to identify the five candidates they’re most excited about, 54% say Warren, followed by Biden (53%), then Harris (53%), Sanders (49%), and Buttigieg (46%).”

Warren also leads the rest of the Democrats in three other poll questions, when asked which candidates caucus-goers describe as “smart,” as “tough,” and as “honest and ethical.”

Both women and men equally list Warren as one of the candidates they’re excited about (54% each). The same is true of different education levels, and even whether someone caucused for Sanders or Clinton in 2016. That could point to Warren being a unifying force in the Democratic primary; were she to win, it doesn’t look like one group of Democrats would feel particularly left out.

Where she runs into issues may be a controversial subject. When asked which candidates they view as “likable,” Warren falls down into sixth place at 40%, behind Biden at 67%, Buttigieg at 56%, Sanders at 45%, O’Rourke at 43%, and Harris at 41%. Warren also slips to fourth place when asked which of the candidates are most likely to defeat Trump in the general election. Biden, Sanders, and Harris lead her there. Those are the only areas in the poll where Warren struggles.

Interestingly, Warren still receives the highest favorability and excitement numbers despite this. It seems that perhaps Democratic caucus-goers themselves really like Warren, but they’re worried that other voters may not.

With viability rules in the Iowa Caucus (in most precincts, a candidate needs to get to 15% to be viable and receive delegates), Iowans’ second-choices are important. Again on this front, Warren does well. She is the top second-choice candidate at 19%. The top five are:

Still Room To Grow For Buttigieg?

Booker sits at a mere 1% in the horserace poll, but his name pops up often in the other questions. 26% of likely caucus-goers listed him as a candidate they were most excited about, enough for seventh place in that rating. He’s in sixth on which candidates people list as “smart,” sixth on the “tough” question, seventh on “likable,” “honest and ethical,” and likely to defeat Trump. In almost all of those questions, he’s getting support in the 20s and 30s of percentages, a clear separation from most other candidates who join him in the 0% to 2% club on the caucus first-choice question. Those underlying qualities suggest he may be well-positioned to move up at some point.

A lot of Iowans really like Harris, even if they haven’t seen as much coverage of her. Her combined favorability is 70%, behind only Warren (78%) and Sanders (71%). Only 7% said they haven’t heard of her, although just 35% have read or seen “a lot” about her, lower than most of those high up in the horserace numbers. And Iowa caucus-goers are especially excited for her candidacy, with 53% listing her as one they’re excited for. That’s essentially tied at the top with Warren (54%) and Biden (53%).

The Iowa Starting Line/Change Research Iowa survey is part of the 2020 Change series, up to three polls per week timed to the Democratic primary schedule. See beyond the horse race with deep data reports and single state or issue polls with a paid subscription. Start a conversation at 2020change@changeresearch.com.