A nonstop parade of presidential candidates has visited the good people of Iowa nearly every day this year. Turn around any weekend in a major Iowa county and you’re likely to bump into a White House hopeful.

However, not every corner of the state has received the same amount of 2020 attention, nor have the candidates stuck to traditional or similar early travel routes. And seeing where the candidates have started their Iowa outreach this year can provide intriguing clues to their campaign strategy.

Let’s take a look at which counties each candidate has visited during 2019. We won’t be reaching back to include early visits in 2018 and 2017, in part because this already took enough time to put together as is. And where they’ve been since the primary has really kicked off this year is insightful all the same.

We’ll do these in alphabetical order. Counties shaded in darker colors means the candidate has been there multiple times in 2019. This counts events scheduled through this weekend. We’re only counting structured events, not quick, off-the-record stops for a few press photos. Before people complain, color choices were based off the color schemes the candidates themselves are using for their own campaign.

The latest candidate to enter the race, Colorado’s Bennet has only done a few short trips to Iowa so far. His surgery last month kept him off the campaign trail for a while and delayed a launch, but Bennet did make a three-day trip back in February when he first started considering a run. He’s kept mostly to Central Iowa, doing four events in Polk County alone. Bennet visited Carroll County before some of the biggest Eastern Iowa cities. As you’ll see in these maps, certain counties with strong Democratic organizations (like Carroll’s) attract candidates who have little early infrastructure because the local party can easily turn out a crowd. 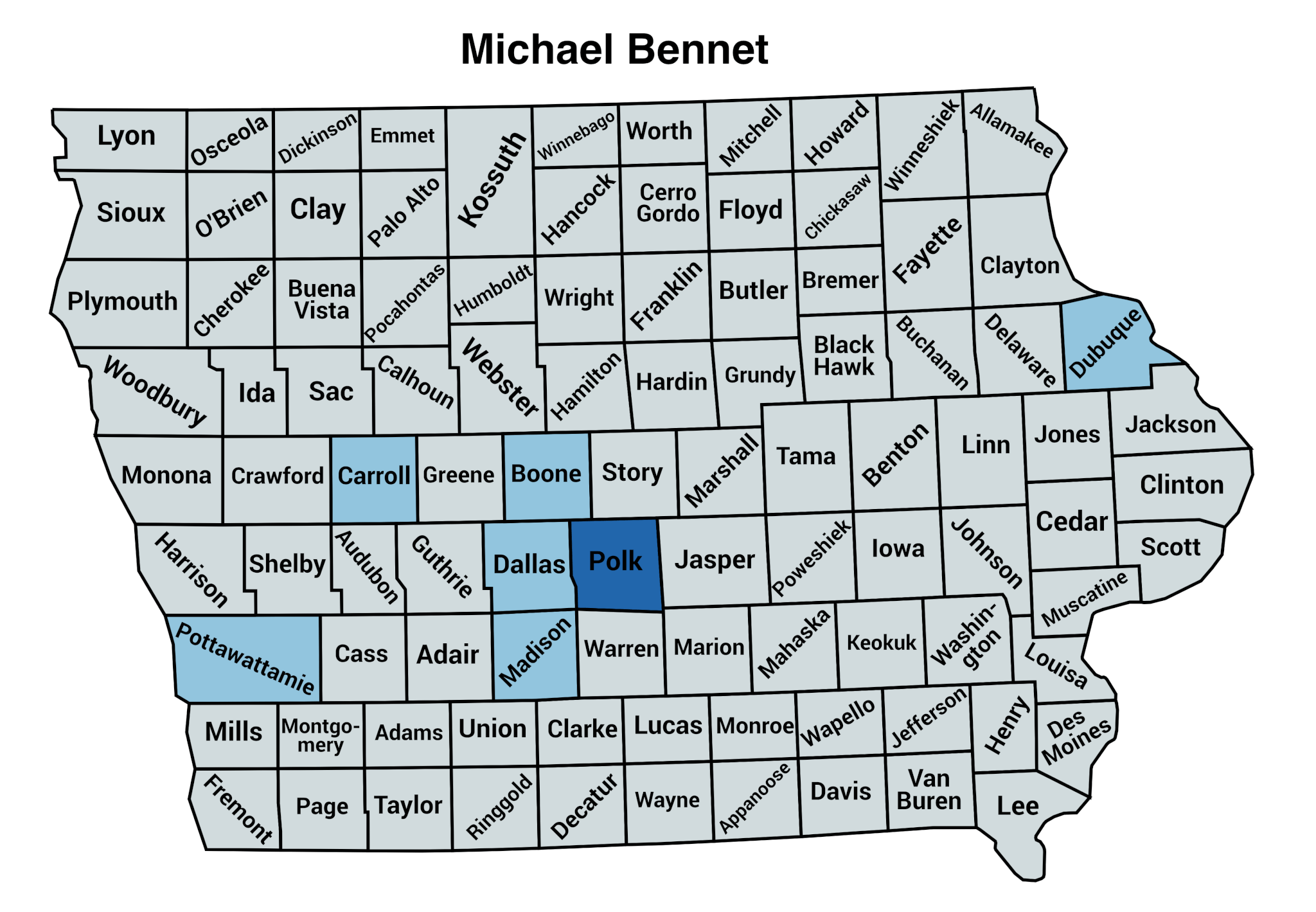 The former vice president’s county visit map looks exactly like how most major candidates plan out their initial trip: hit up the big three of Des Moines, Cedar Rapids, and Iowa City, and take in one other important Democratic county. Biden chose Dubuque, a place where he’s always enjoyed strong support from Catholic Democrats and union members. Scott County, the third-largest county in the state, often gets hit on candidates’ second trip to the state.

Biden pledged to be in Iowa often during the caucus, but he starts out behind on the map compared to candidates who announced early on or made pre-campaign visits. 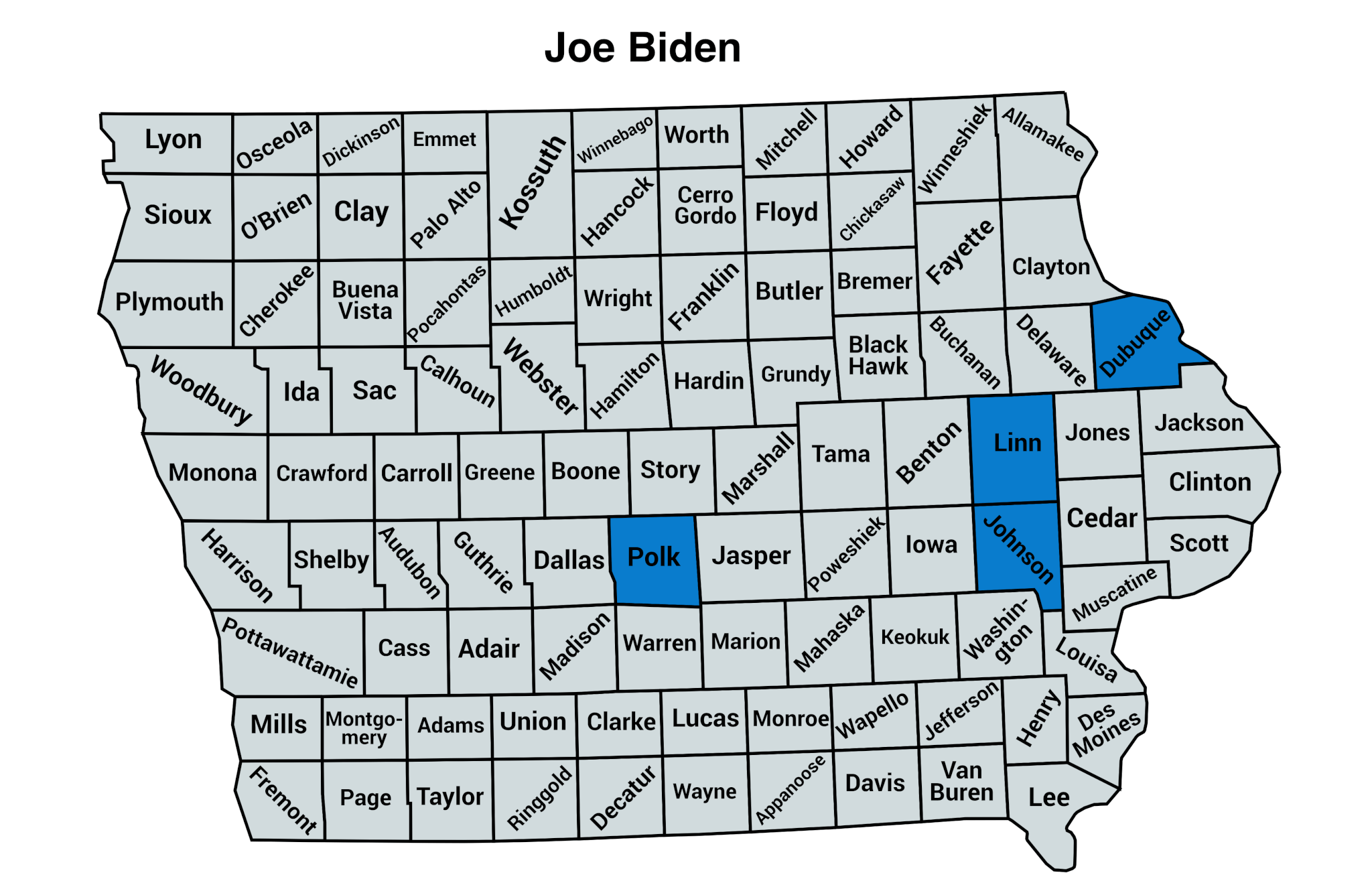 Booker appears to be working his way through all the top-population counties in the state before doing region-specific tours. He’s found large crowds along the way, mixing his event formats between town halls, rallies, and panel discussions. As will be the case with many of these maps, Black Hawk County got multiple visits thanks to the special election that several candidates helped out with in March. 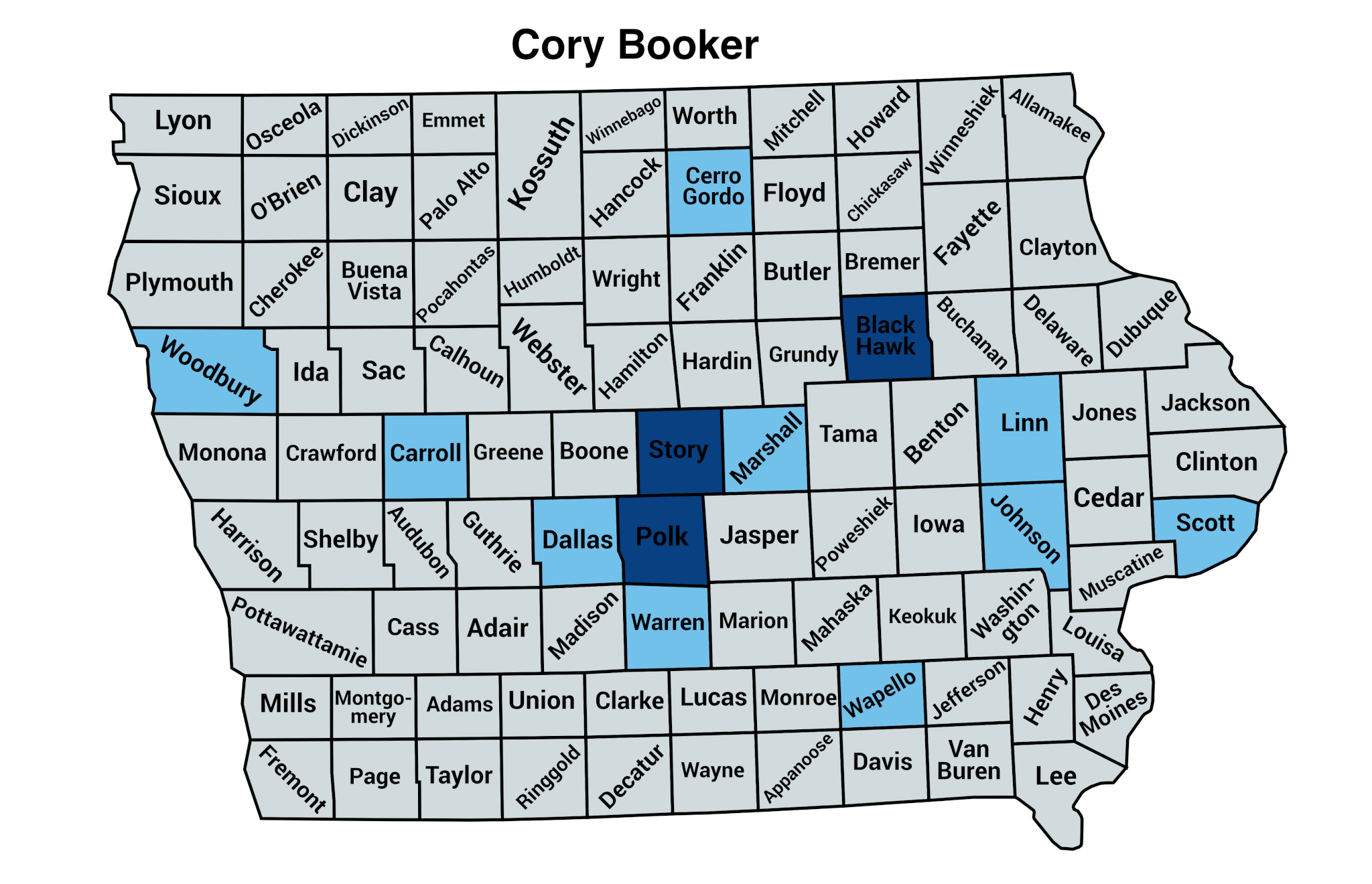 Buttigieg has only made one trip back to Iowa since blowing up after his CNN town hall in March, and he saw very large crowds greet him upon his return. However, he’s spent a lot of his time on the national news and fundraising circuit since. Earlier on this year, Buttigieg targeted his visits to college crowds in Ames and Grinnell, which seemed like a concerted effort to find his new-generation niche in the caucus. Now he’s playing to a much broader crowd. 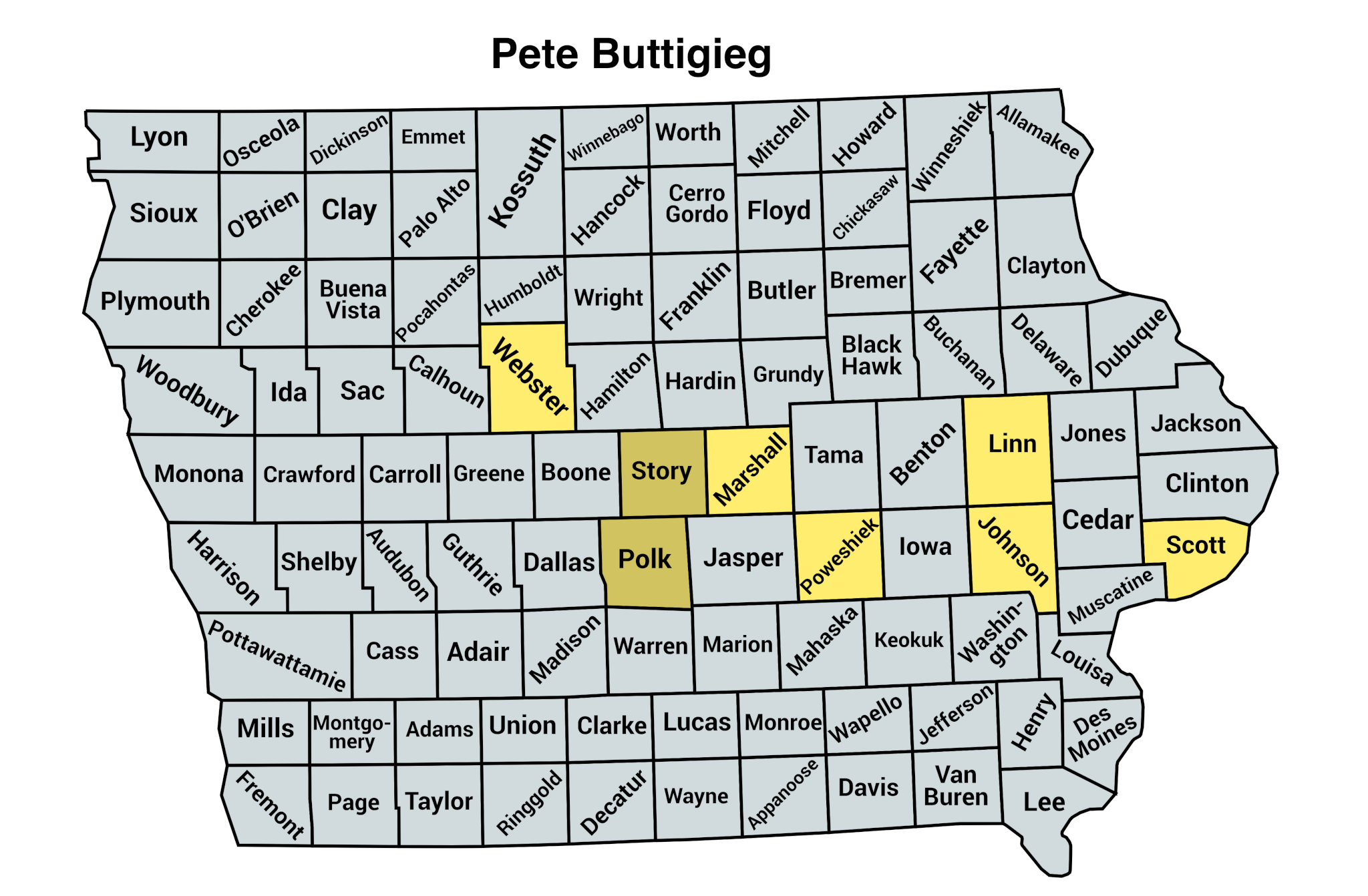 Castro has quietly racked up quiet a lot of county visits in Iowa this year, including multiple appearances in seven counties, the most of any candidate this year. He’s also taking a very targeted approach in Iowa, making several trips out to Western Iowa. Castro has visited counties with large Hispanic communities and small counties where the precincts and caucus math make it easier to hit viability (like Audubon County). This past week, Castro did a college campus tour. 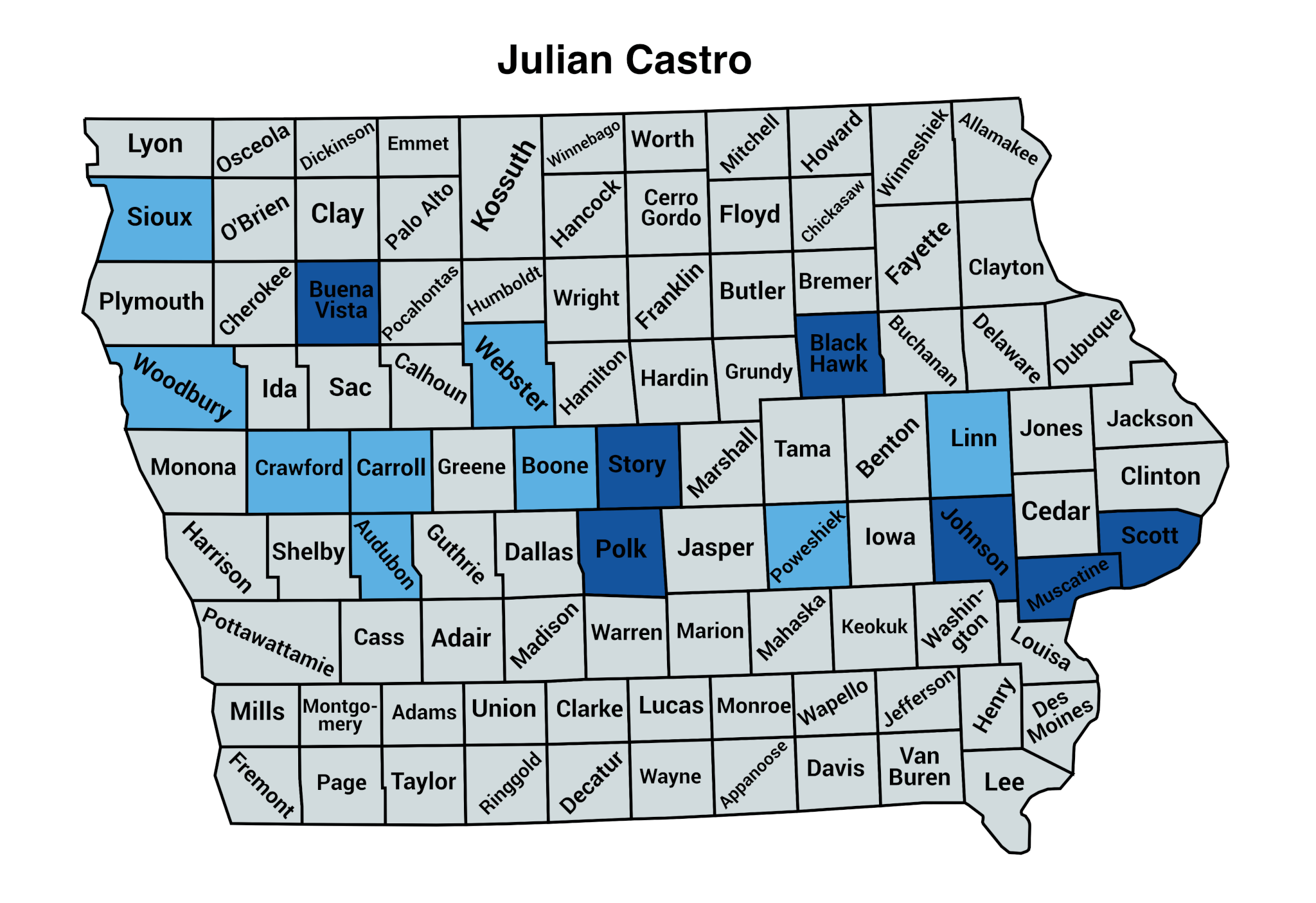 This is a case where only using the 2019 visits doesn’t tell the full picture. Delaney has already painted this entire map by doing a 99-county tour that finished up last summer. But that simply makes it impressive that he’s covered this much ground again this year. Now that he’s no longer in Congress, Delaney has even more time to drive around the early states. A large field team and good name ID in Iowa thanks to his TV ads also typically give Delaney good turnouts in the smaller counties he visits. Part of a Delaney strategy for the caucus will be to get to viability in many of the rural counties where it’s easier to do so. 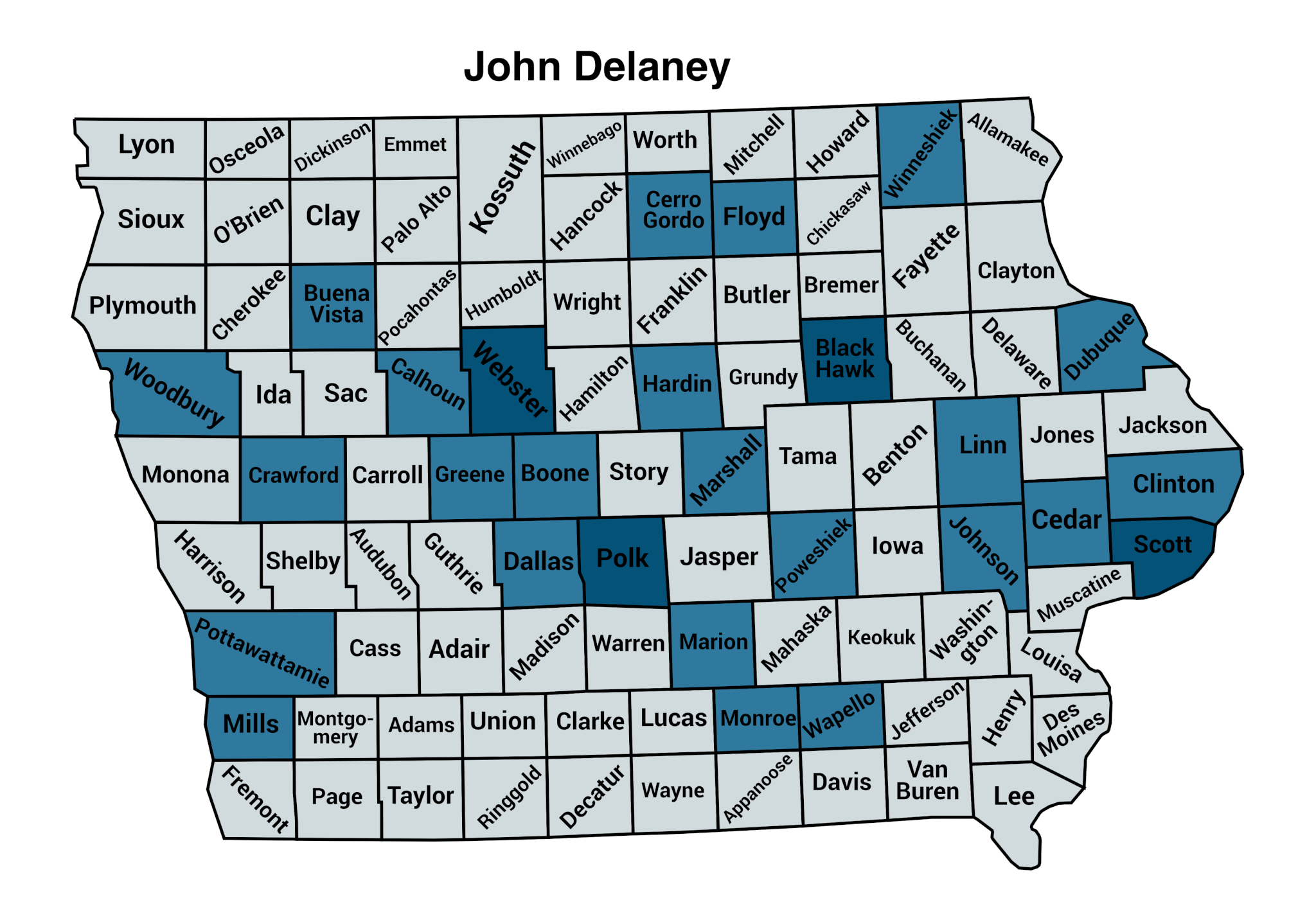 Gabbard’s initial trips out to Iowa stuck mostly to the counties that like to reward progressive or outsider candidates. She’s made a significant amount of stops in Iowa City and Fairfield before hitting up Cedar Rapids or Davenport, holding five events in Iowa City already. She’s since started to branch out, doing a Southeast Iowa swing in April. Gillibrand has notched a lot of county visits already this year, typically doing longer, multi-day swings when she comes out to Iowa. She’s done a couple of region-specific tours, visiting four Mississippi River counties in one trip and going through Southwest and Western Iowa in another. She touts on the campaign trail that she’s won in rural and blue-collar areas in New York, and much of her Iowa travel schedule has focused on similar counties here. Harris has made three trips out to Iowa in 2019, though most of those visits have been short and sweet. She’s another candidate who appears to have spent much of the 1st Quarter focused on fundraising, which will hopefully allow for more early state visits later on. Harris has attracted some of the largest turnouts when she is here. 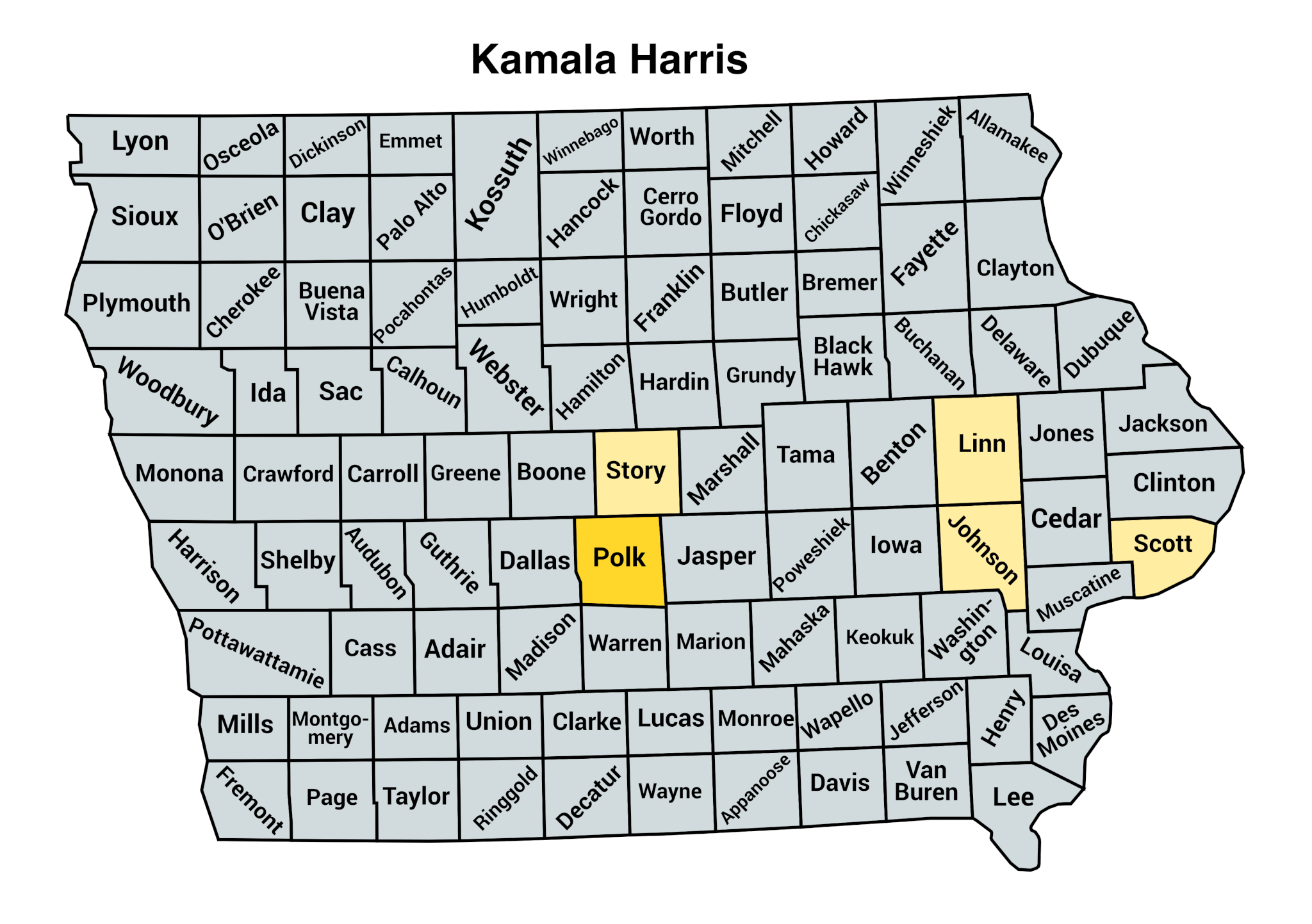 Hickenlooper’s visits have focused heavily on Iowa’s eastern seaboard, knocking out a lot of the blue-collar, union-heavy counties out there. He’ll also be one of the few that have visited Newton/Jasper County so far this year. 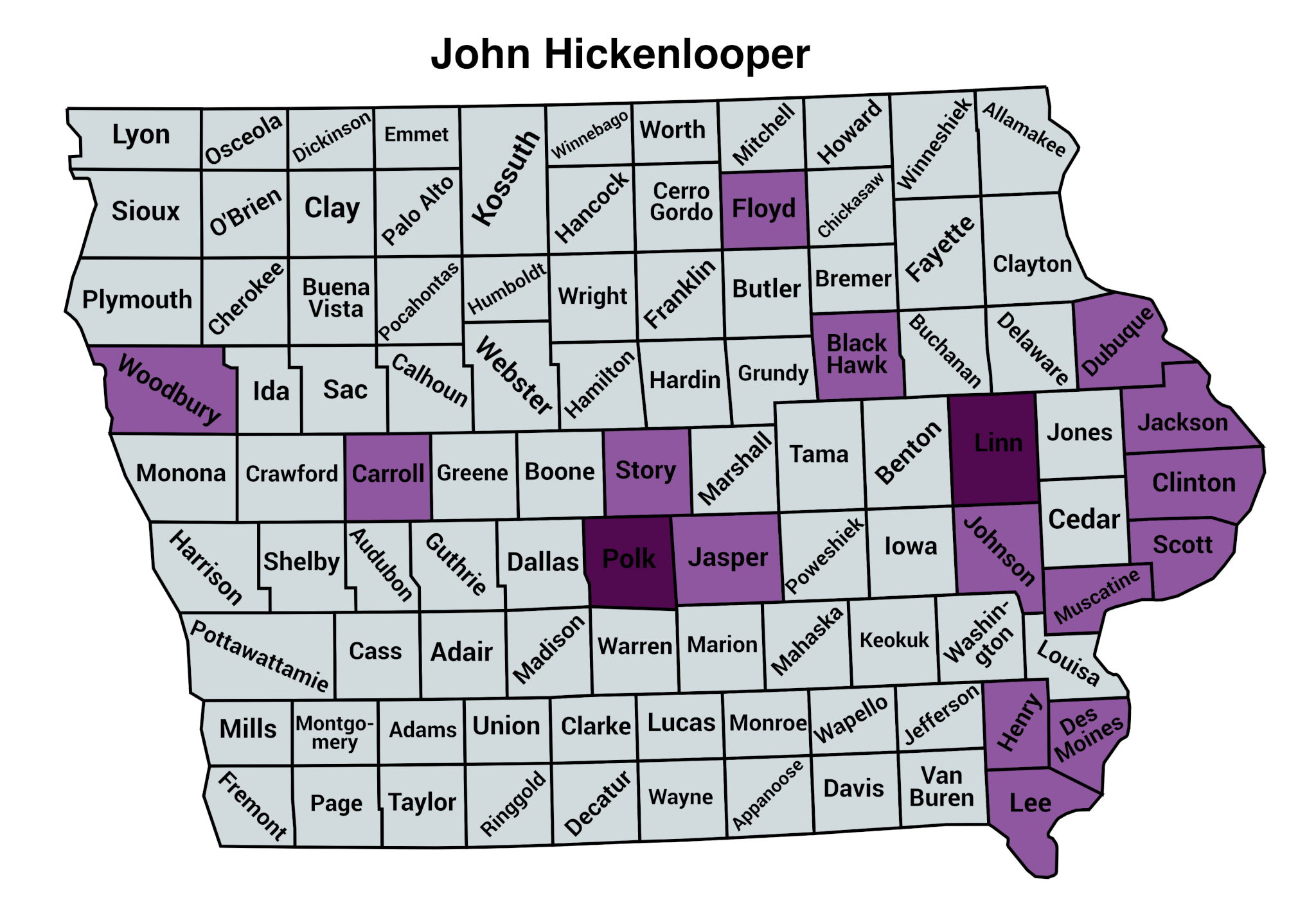 Both of Inslee’s Iowa trips have been for just one day each this year; he appears to be another candidate who spent a lot of time early on in the race on fundraising. Inslee started off in the counties where there are large climate change activist networks. Inslee also toured the flooding in Southwest Iowa, which is why Mills and Fremont counties appear on a lot of candidates’ maps. Klobuchar is a frequent visitor to Iowa. Many of her trips are only for one or two days, but being within easy driving distance means she can hop in and out more often for local Democratic events and trips. She too visited Southwest Iowa to see the aftermath of the flooding. Klobuchar has also begun to focus in on some rural counties, where her experience on the Agriculture Committee gives her some extra talking points. 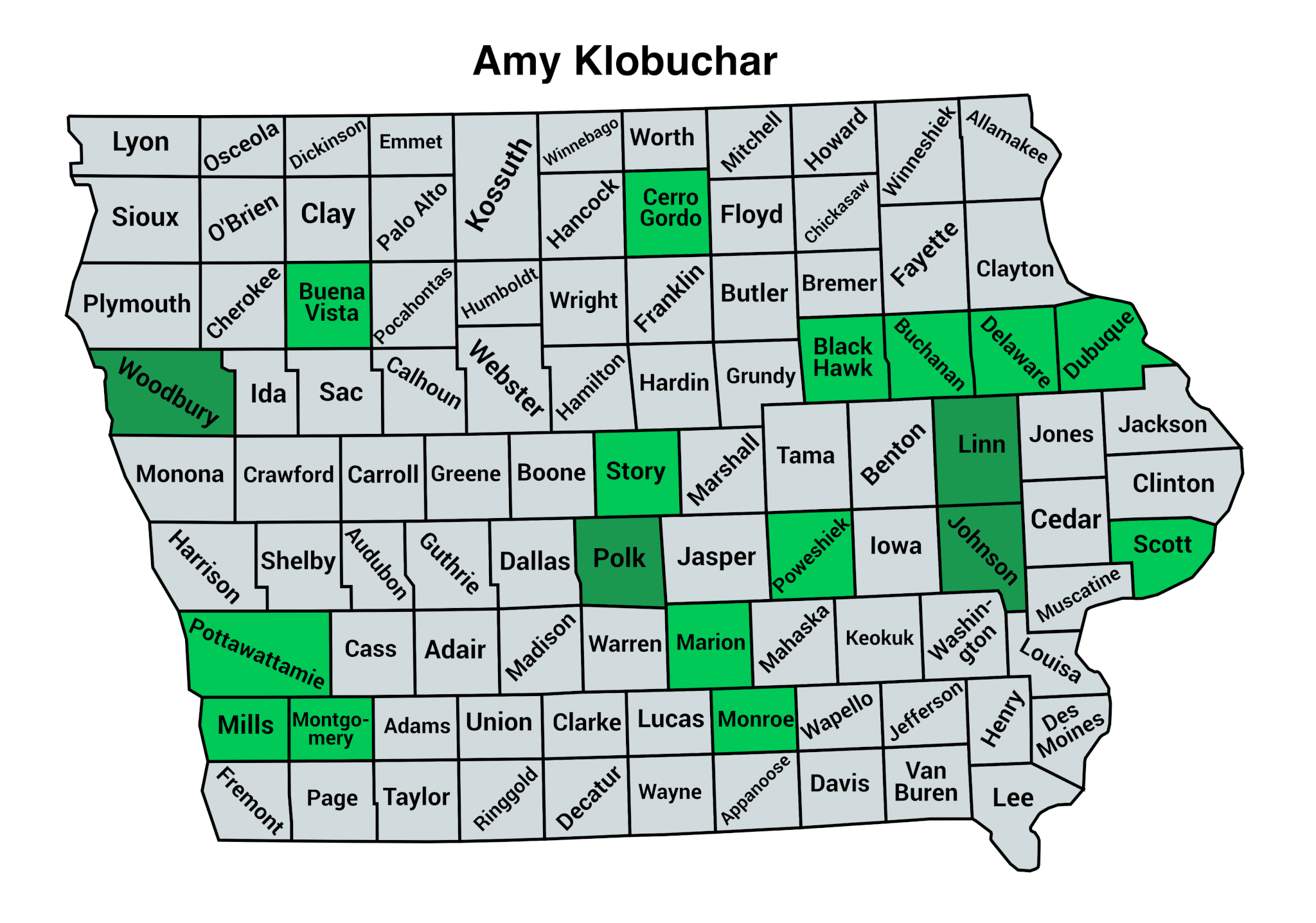 Moulton, who announced in late April, is just getting started in his campaign. He didn’t do any lengthy early visits this year before his launch like some others did (partly because it seems he made up his mind this year that he’d run). 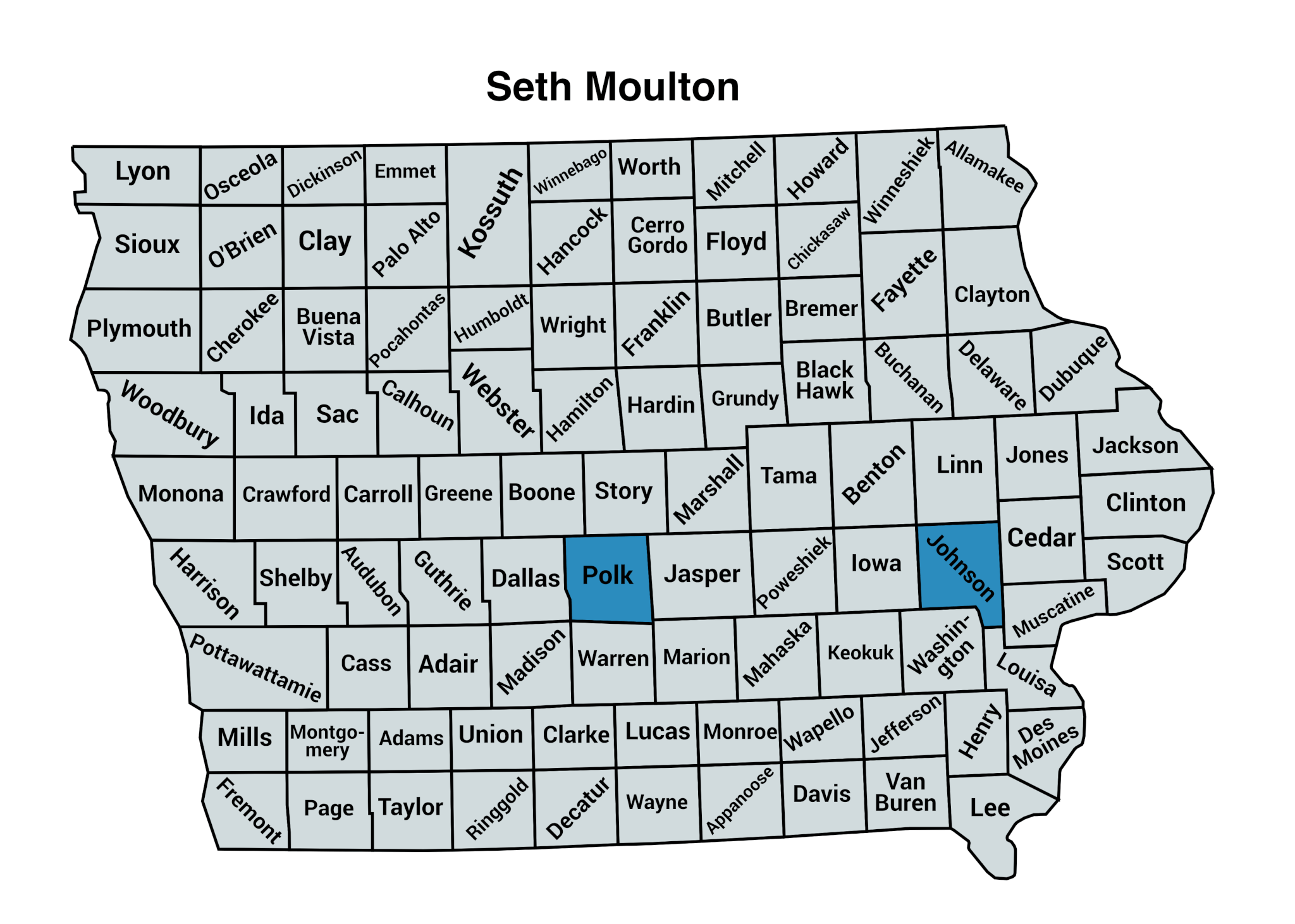 While O’Rourke has only made three trips to Iowa in 2019, each one has been an endurance test that racks up as many stops as possible, lasting four or five days. Such is the benefit of not having a formal day job. O’Rourke’s barnstorming of the state (usually with him at the wheel) has already brought him to over a third of Iowa’s 99 counties. If he decides to do a full 99-county tour, he may be the second to get there after Delaney. O’Rourke has already done multiple stops within these initial counties, including one day where he held six separate Polk County events. 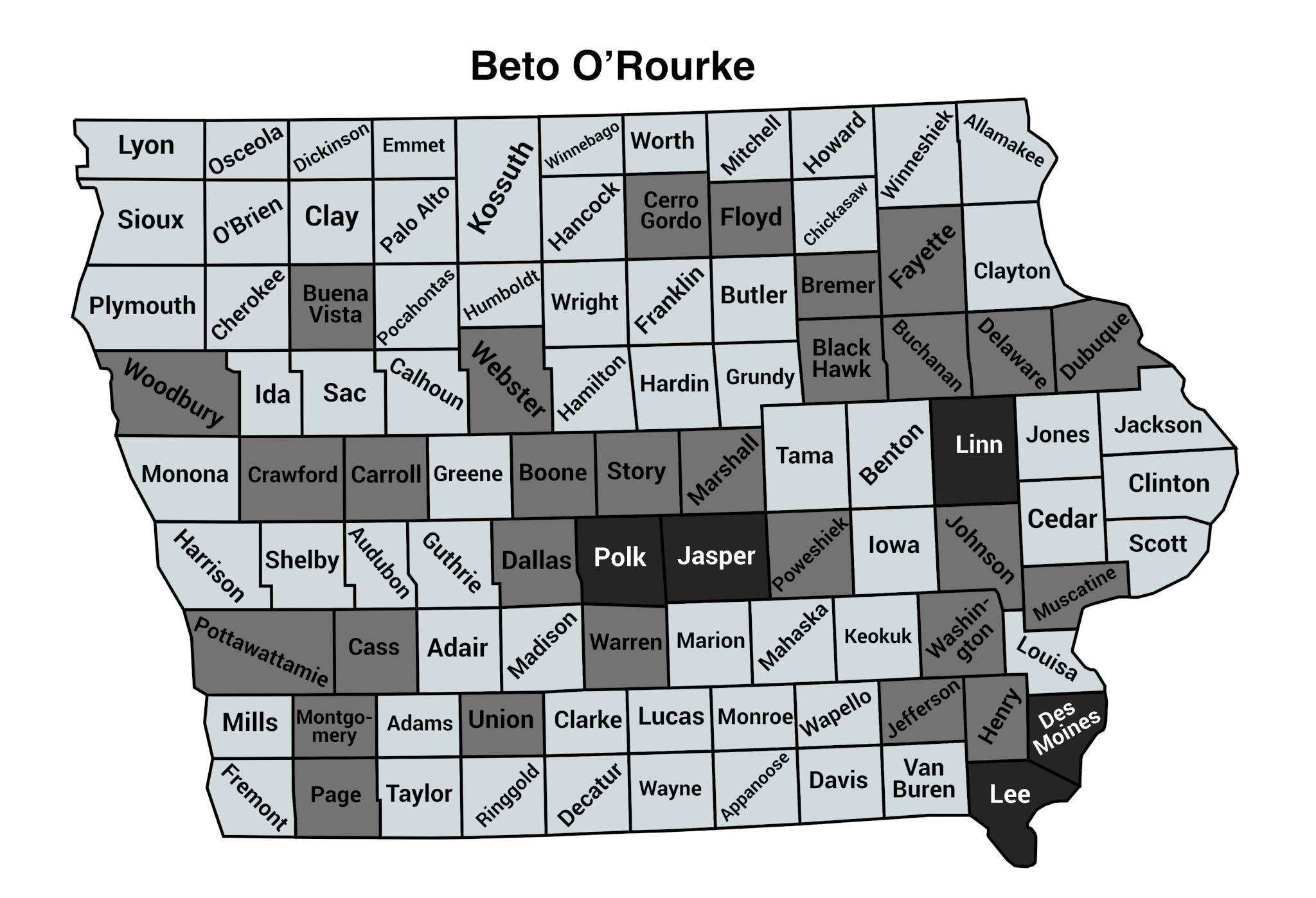 Even without staff on the ground, Ryan has started to make some headway into Iowa. One of his initial campaign swings focused on blue-collar counties in Southeast Iowa, the type he’s skilled at winning back home in Ohio. Ryan went there before some of the more traditional early stops like Ames, Iowa City, and Cedar Rapids. 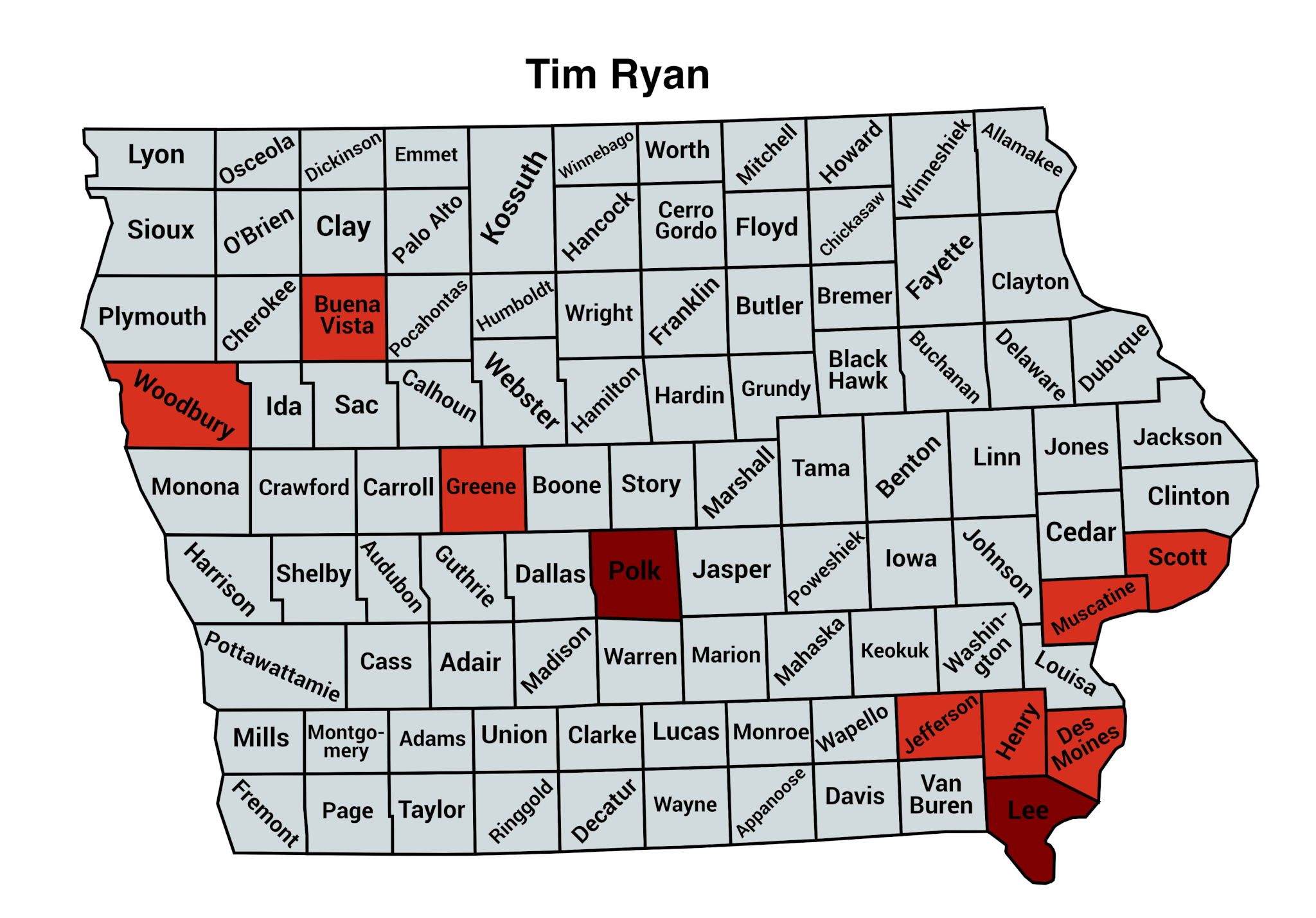 No stranger to Iowa, Sanders started off his campaign with three major rallies in Council Bluffs, Iowa City, and Des Moines. After that, Sanders’ schedule looked to more rural counties, where he’s been talking about his new anti-trust plan to break up large agribusinesses.

Interestingly, Sanders has yet to hold multiple events in any county (unless you count his unscheduled tour of the Des Moines Farmers Market). Most of his events are structured speeches from the podium that draw in Sanders fans from a wide radius, so he hasn’t been doing as many small house parties or one-off policy events like many of the other candidates.

Swalwell is another candidate who traveled across Iowa extensively in the two years leading up to this one, laying significant groundwork ahead of time for his presidential run. He too can get to 99 counties from here if he so chooses. Swalwell has spent a good chunk of time out in Western Iowa, networking with the activists there and touting his time growing up in Kossuth County. 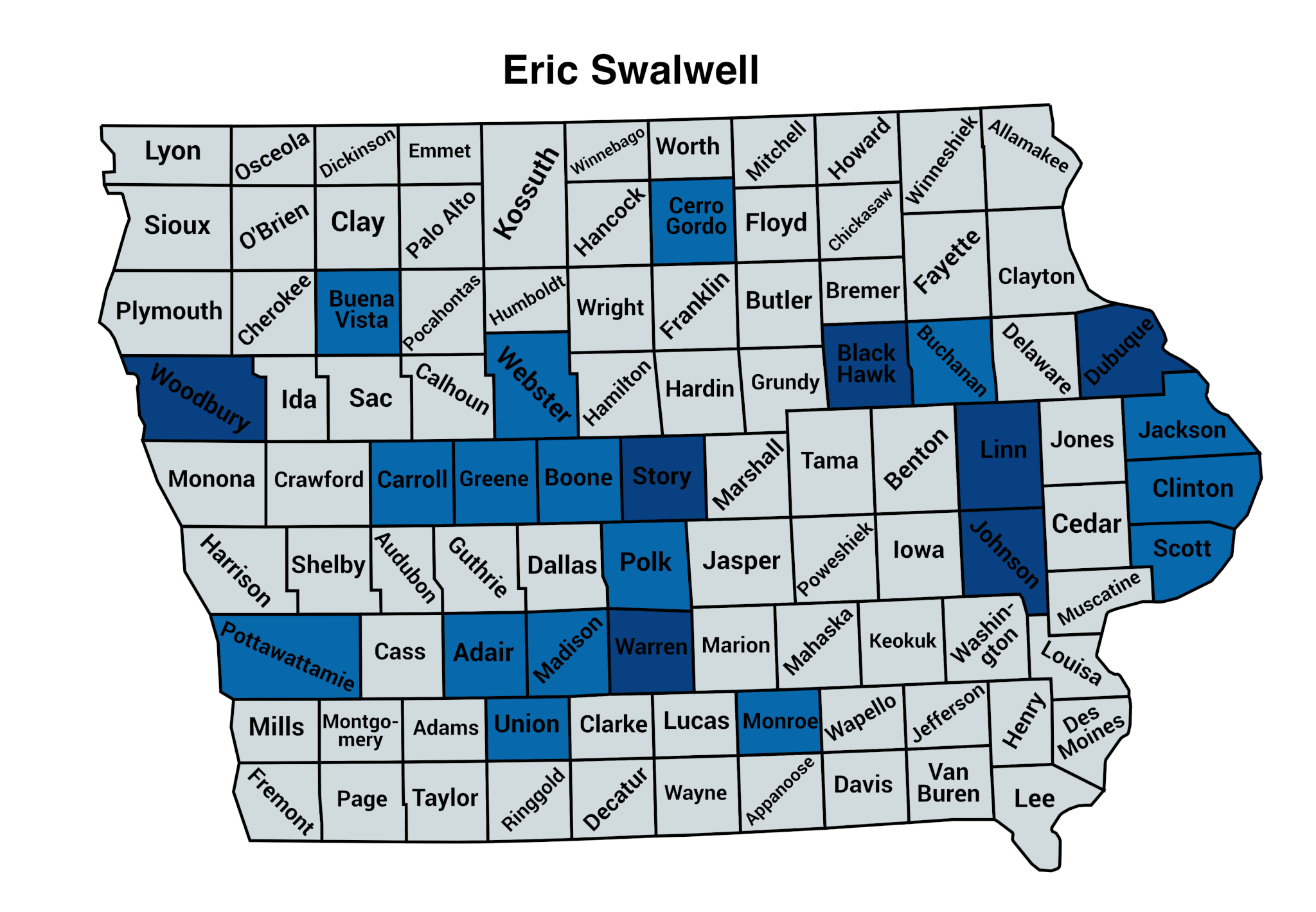 Being the first major candidate to announce gave Warren some extra time to travel to Iowa this year. She’s been back often, usually holding large, well-attended town halls across the state. Warren has a large field team, which helps build for events in some more difficult rural counties like Clayton, Hardin, and Mitchell.  She’s also one of the few candidates to campaign in Northeast Iowa early on. 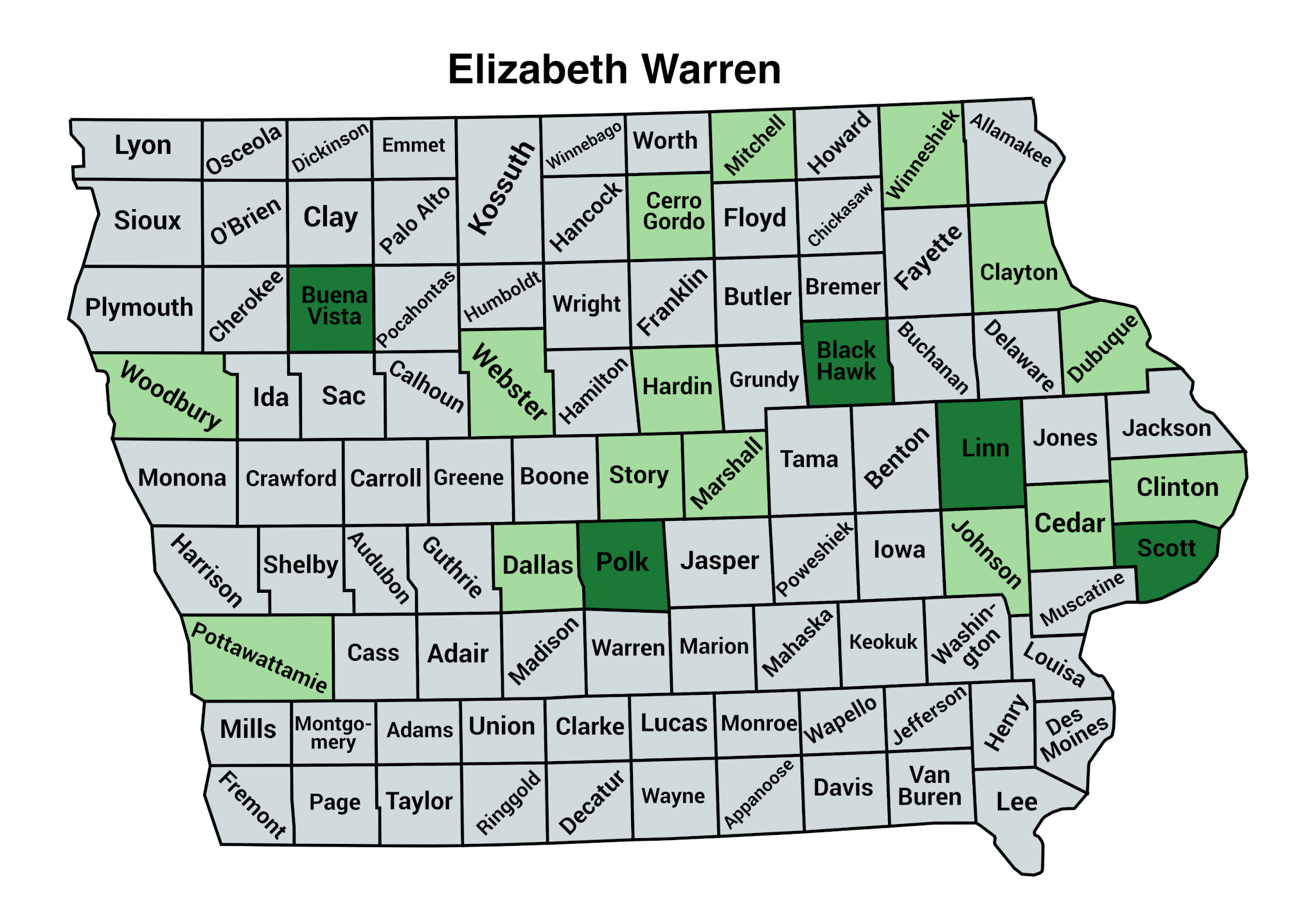 Like Gabbard, Williamson has frequented counties that prefer their outsider candidates, and she’s already done three events in Fairfield. She’s also spent significant time in the Des Moines metro (where she now has an apartment), holding many house parties there before getting out to some mainstays like Cedar Rapids and Davenport. 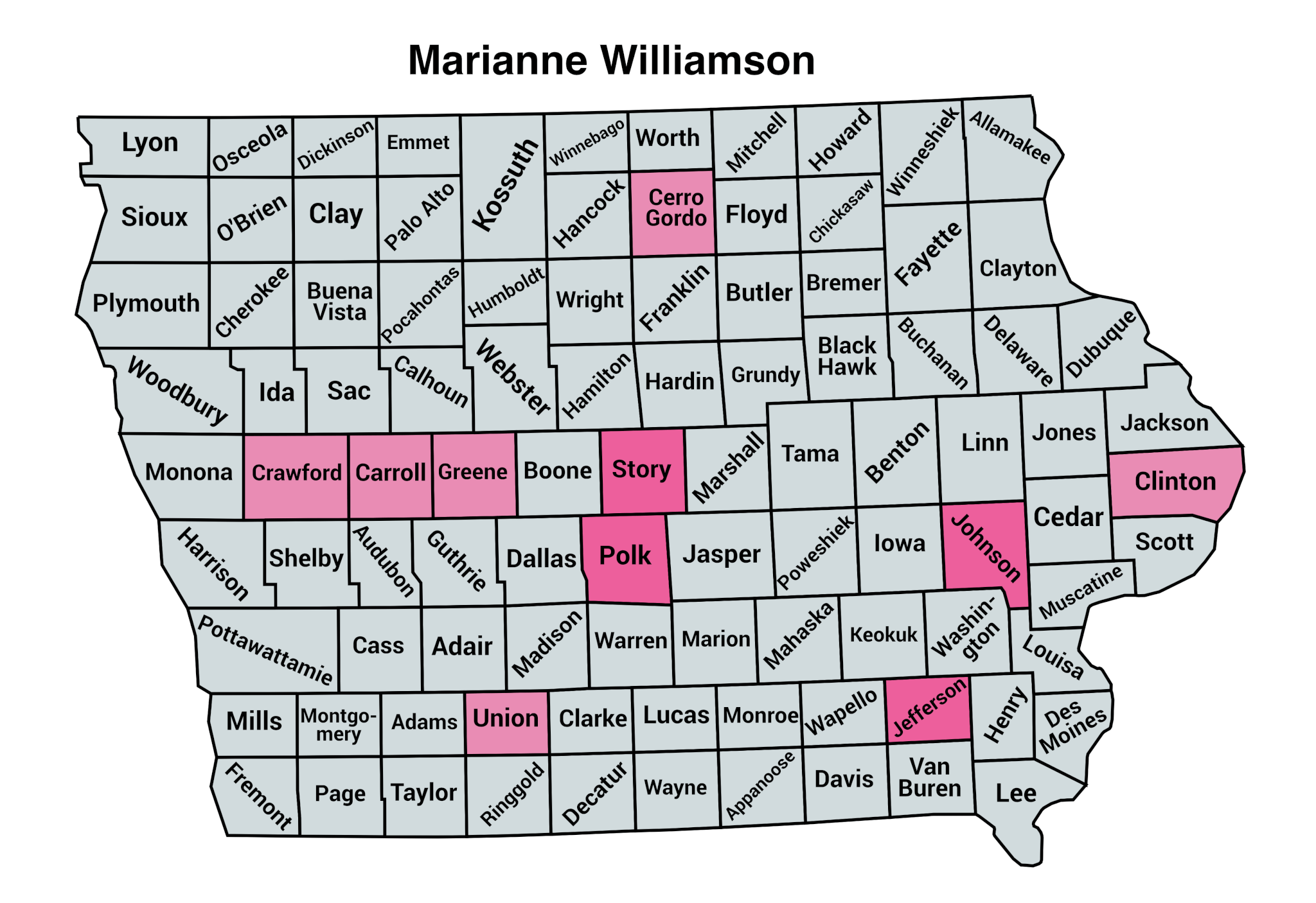 Yang has done a good deal of travel throughout Iowa, both last year and this. Now that he’s caught fire online, he’s holding larger rallies in big cities across the country, but he’s still making sure to visit early states often. When Yang visits Iowa, it’s usually for longer trips with a variety of types of events, from town halls to policy round tables to ride-alongs with truckers. Like a surprising number of candidates have, Yang has hit up a lot of Western Iowa counties. He’s also the only one to visit Allamakee County this year. 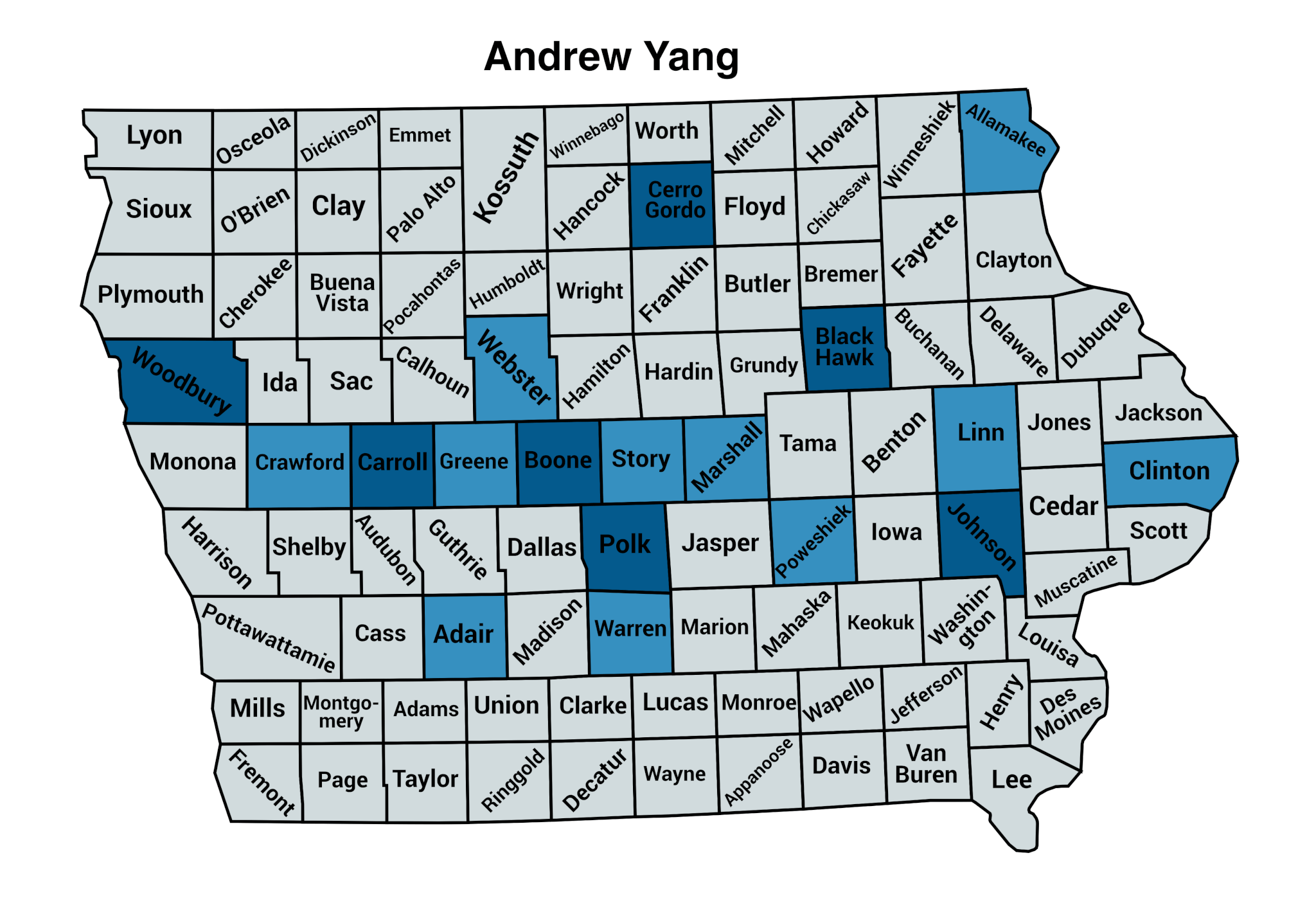 To see where the candidates are headed next, make sure to bookmark our Caucus Calendar.

1 Comment on "The 2020 Candidates’ Early Travel Strategies In Iowa"