A guest post from Brit Bender, state director for NextGen Iowa, which ran an extensive youth voter turnout project in 2018.

The Iowa GOP has a history of student voter suppression. In 2017, then-Governor Terry Branstad signed a law that prohibited student IDs from being used as voter IDs. This legislative session, Republicans tried to ban public universities as early voting locations and force students to sign a form stating their intent to remain in Iowa upon graduating to remain on the voter rolls.

Fortunately, these tried-and-true tactics to suppress the youth vote were met with fierce opposition from grassroots activists, and died in the Senate last week.

Make no mistake — these student voter suppression laws did not come out of the blue. They follow an election cycle where youth turnout levels were the highest in any midterm in a decade. 41% of young Iowans (18-35) cast a ballot in November — up 13 points from the last midterm election — helping elect Cindy Axne and Abby Finkenauer as the first female members of the U.S. House from Iowa.

While we should celebrate the defeat of these anti-democratic bills, progressives in Iowa also need to stay vigilant. Young people are a force to be reckoned with, and their voice will be an essential part of deciding not only who the Democratic nominee for President is, but also who Iowa’s next senator will be. We should be lifting up our young people, not shutting them down — and that’s why NextGen America has not stopped organizing young Iowans since November.

NextGen has organized in Iowa consistently since 2014, and over the years, we’ve learned what works. In 2018, we grew our program to 58 staff and over 800 volunteers, and ran a massive face-to-face field, digital advertising, and experiment-informed mail programs to mobilize young Iowans to historic levels. With Iowa’s voter file updated, it is clear NextGen’s efforts helped play a decisive role in flipping key Iowa Congressional districts. If Iowa is going to flip back to blue in 2020, the lessons learned from our program will be critical for victory.

Young Iowans are the ones Democrats need to win in 2020, and they are willing to show up and vote, but only if we actively engage and mobilize them.

63% of the young Iowans organized[1] by the NextGen field program turned out to vote, 22 points higher than their age cohort writ large. Our results were even more impressive in crucial red-to-blue districts. In IA-03, where Cindy Axne (D) defeated incumbent Rep. David Young (R) by just 7,709 votes, NextGen registered 3,390 young people to vote, gathered 4,409 pledges to vote, and knocked on 16,109 doors. 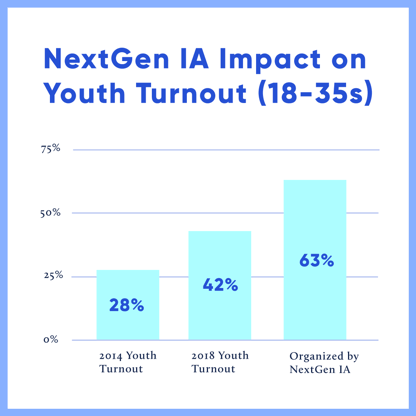 65% of the young people organized by NextGen in IA-03 voted, compared to 48% of young people in the district overall. In short, spending your resources on building in-person relationships with young people is worth it.

Lesson #2: Talk to young people where they are

A smart youth vote program cannot be limited to face-to-face conversations, it must also include a digital, mail and texting program to reach young voters who are more difficult to reach.

NextGen Iowa ran a 9-week digital ad program aimed at turning out young people who either have never voted before or are sporadic voters. Young Iowans targeted by our digital program turned out up to 6 points higher than the young voters we didn’t target. Similarly, we sent get-out-the-vote mail to over 90,000 Iowans, and these voters turned out 16 points higher than those we did not send mail to (read: mail works for young people!). 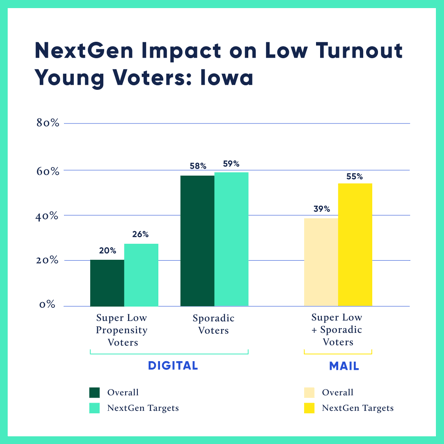 Our team collected thousands of signatures to get 19 early vote polling places on campuses. The young Iowans registered by NextGen voted at increasingly higher rates when their colleges or universities offered an early voting site, and when campuses offered both early voting and Election Day polling sites, turnout increased 27 points! This is a key reason why the Iowa GOP tried to ban early vote from public universities this year, and if we don’t keep the pressure on them, they will do it again next session. 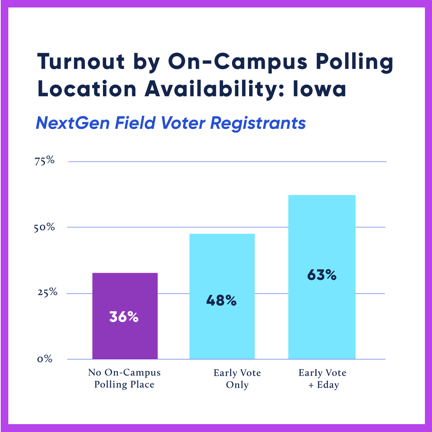 Democrats will need to galvanize young people to win Iowa in 2020, and NextGen is already on the ground putting in the work to do so. On issues from healthcare to education to climate change, the young people of this country are getting organized and making their voices heard like never before. It’s about time we paid attention. Join us: nextgenamerica.org/rising

[1] “Organized” includes young people who were registered, canvassed, or committed to vote by NextGen’s field and mail programs.

2 Comments on "Despite Voter Suppression Efforts, Young Voters Turned Out In Iowa"