Iowa is heaven on earth for political junkies, especially so for the Democratic activists who are closely following this year’s historically large field of candidates. But if you live outside our great state, do you ever watch the TV clips of presidential contenders stumping in coffee shops and diners across Iowa with just a little bit of envy, wishing you too could experience this all up close?

Well, Iowa does typically get its fair share of political tourists. The problem is that so many of them wait right up until the media hype around Iowa hits its peak, making an impromptu trip out in the final month before caucus night.

This is a bad idea. The weather is awful in January, there’s 1,000 people at every caucus event instead of just a couple dozen, the crush of the national and international press corp is unbearable, and you’re much less likely to get up close to a candidate. It’s all just a madhouse at that point, and you miss out on the real, authentic experience that happens earlier.

Fortunately, it’s easy to make a cheap, memorable Iowa Caucus sight-seeing visit early on in the race. You just have to plan ahead.

Most campaigns don’t make their next Iowa travel plans public until about a week out from their trip. That obviously makes it difficult for someone wanting to plan a caucus tourism visit well in advance. Yes, with this large a field, there is almost always someone in the state, but we have already had a few weeks with no activity. Plus, it’s better to see multiple candidates on your trip.

To best time your visit, look ahead to key moments on the calendar. There are certain major party events that are absolutely certain to draw a dozen or more candidates. And there’s specific weeks during the year where presidential visits are more likely.

One of your best planning tools is the Congressional recess calendar. We currently have six senators and four House members running. When their chamber is in session, they’re in D.C. When it’s not, they’re almost always out on the campaign trail. It’s not a sure bet that they’ll all be in Iowa during that time, mind you, but it’s one of your better chances to see candidates.

As you can see on the calendar, the last week of May, the first week of July, and the first two weeks of October should be prime candidate sight-seeing weeks in Iowa. The long August recess is peak caucus season, but it’s safest to book a trip during the Iowa State Fair in mid-August. Literally everyone is here then.

Our weekends also often get packed with candidates flying out from D.C. Basically, avoid mid-week trips when both chambers are in session. You may also want to avoid the end-of-quarter time period – candidates often schedule more fundraisers around then.

There are several major party and state events held every year that bring in most of the presidential field. The candidates typically build out full Iowa trips around these big gatherings, so even if a fundraiser gets sold out, you’ll still be likely to go to plenty of caucus events right before and after them.

Here is a list of events where you’re most likely to bump into a few White House hopefuls.

Iowa Democratic Party Hall of Fame Dinner – June 9, Cedar Rapids
This is typically the first big cattle call of all the presidential contenders. Campaigns go all-out in organizing for it, and the candidates bring their A-game to their speeches.

4th Of July Parades
There’s usually a couple candidates that march in parades around the state. 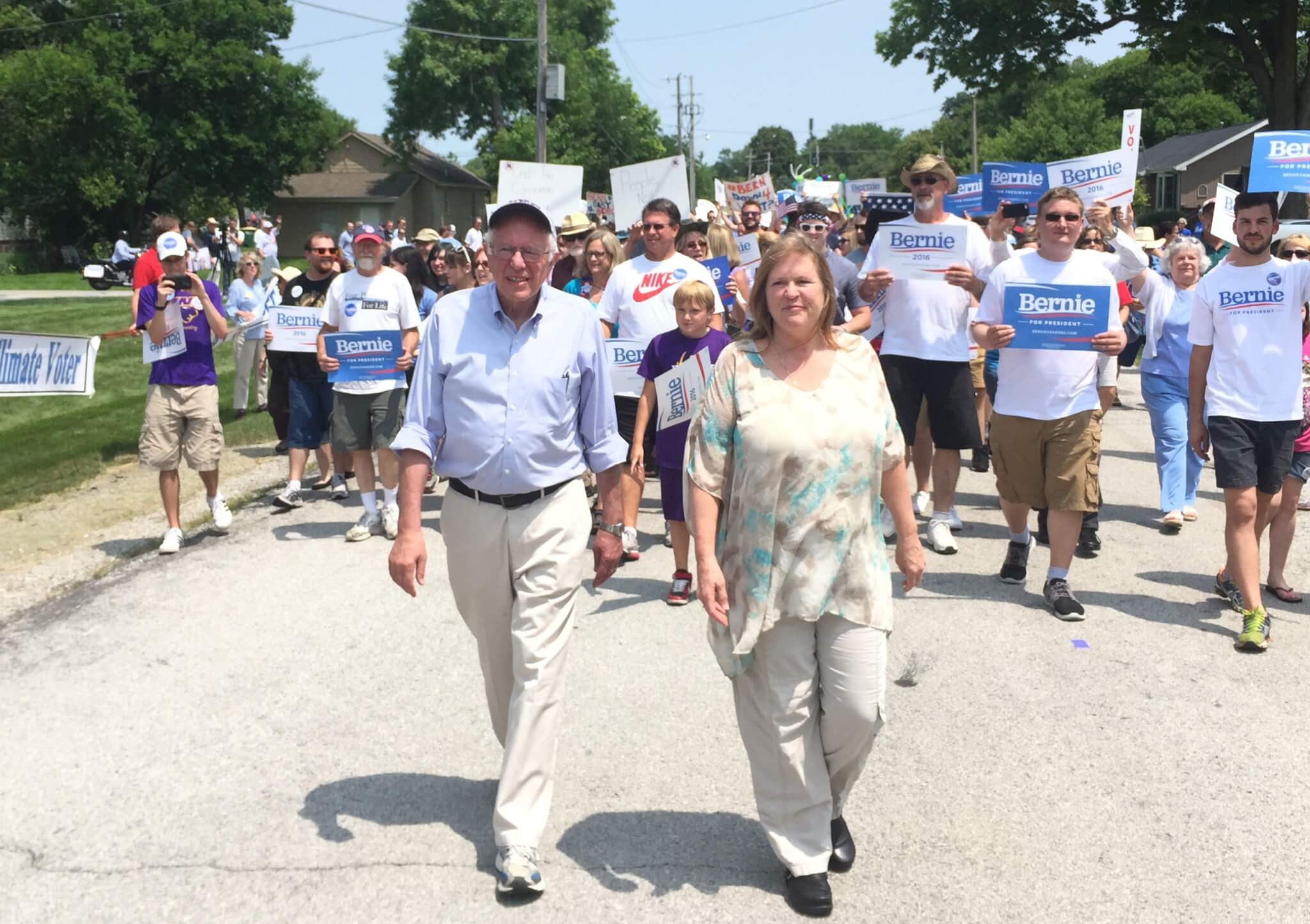 RAGBRAI – July 21 – 27
A huge, cross-state bicycle ride that’s essentially a week-long party. Sometimes candidates come out for it, sometimes they don’t. But campaigns will likely have a presence along the route, which runs across Southern Iowa this year.

Iowa State Fair – August 8 – 18, Des Moines
Nearly every presidential candidate gives a speech and takes Q&A at the Des Moines Register’s Soap Box, then travels the fairgrounds for the best food-on-a-stick they can find. There should be multiple candidates out almost every day. You’ll get by far your most quintessential Iowa Caucus experience here. And the State Fair is a lot of fun even without the candidates! 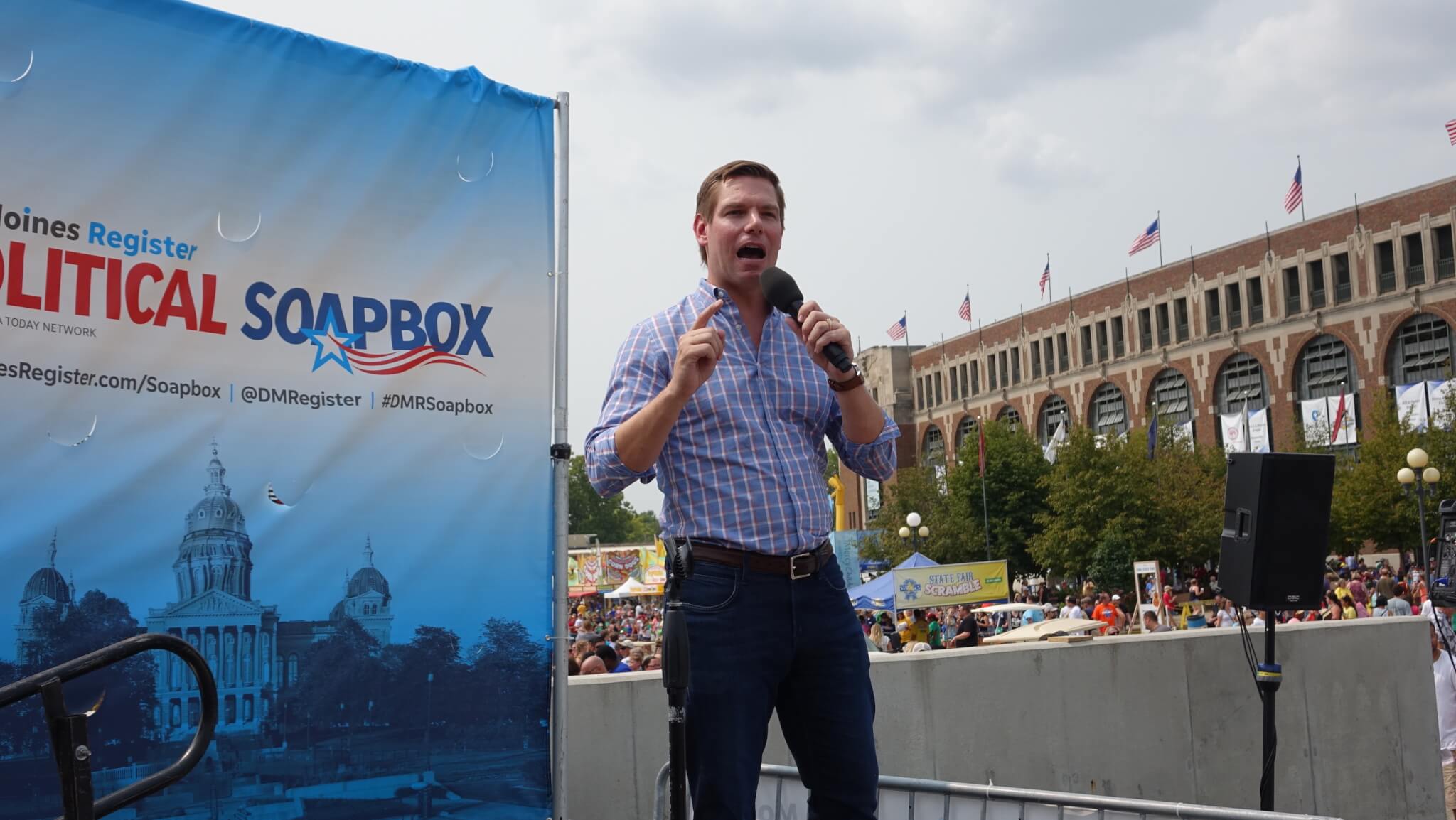 Wing Ding Dinner – August 9, Clear Lake
Get your tickets for this event early, as they’re likely to sell out. Held at the historic Surf Ballroom, which is worth a visit in itself.

Polk County Democrats Steak Fry – September 21, Des Moines
Many of this reporter’s best Iowa politics memories come from the old Tom Harkin Steak Fry events before the 2004 and 2008 caucus. An outdoor political festival, presidential candidates mingle with activists before the marathon of speeches begins. The campaigns also use events like this as a test of their organization, bringing in hundreds of cheering supporters in matching shirts.

Iowa Democratic Party Fall Dinner (new name TBA) – November 1, Des Moines
You may know this from its previous name of the Jefferson-Jackson Dinner – it’s the most important Iowa Caucus event of them all. Some historic, break-out moments were seen here – many credit Barack Obama’s powerful speech in 2007 for changing the dynamics of the race and sending him to a caucus night win. 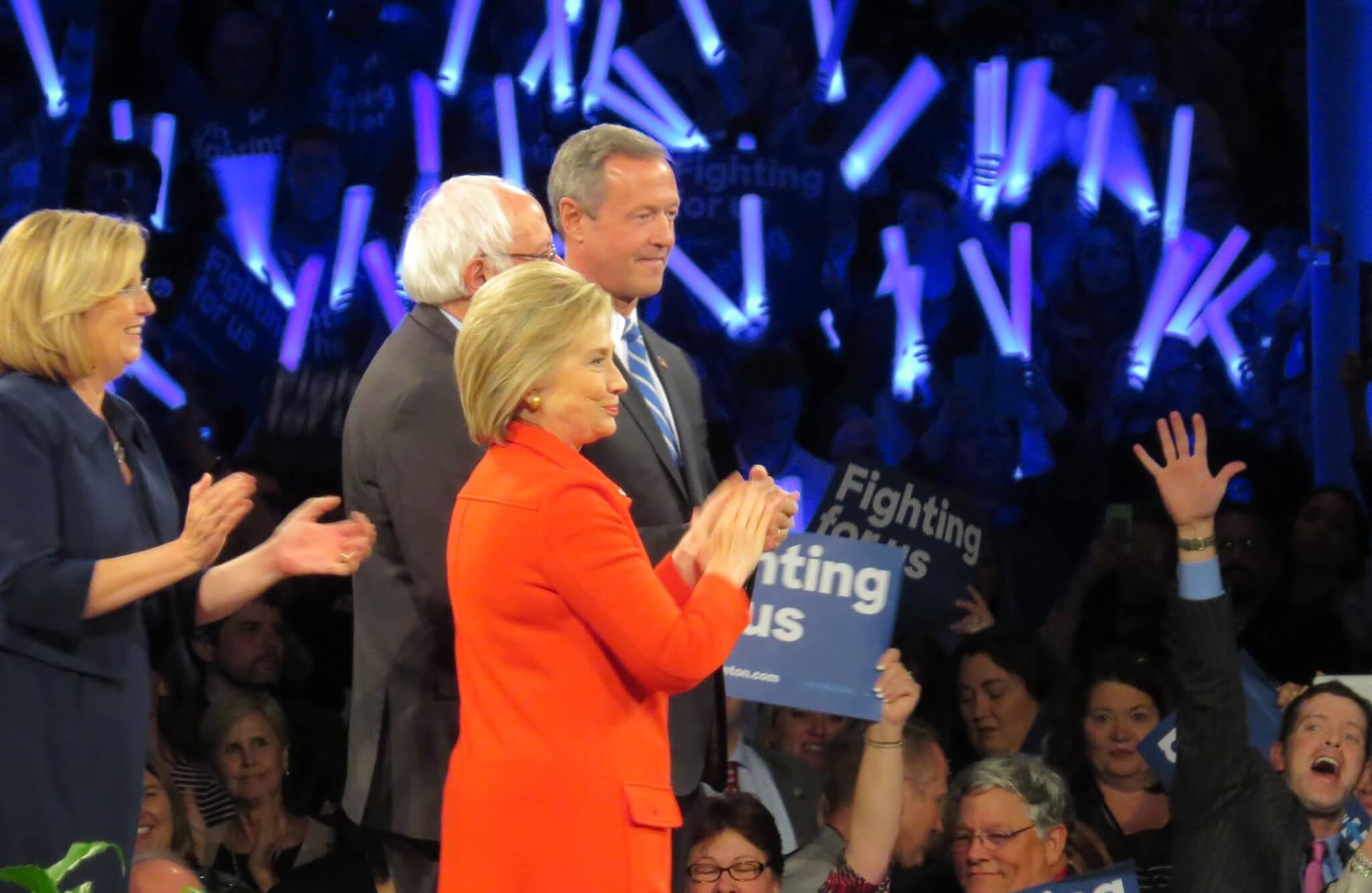 Other Places To Visit

Beyond the candidate events, Iowa has plenty of fun road trip stops. You can check any number of Iowa tourism websites for the main draws, but if you’re looking for places with some political history, here’s a few suggestions:

Hamburg Inn No. 2, Iowa City
A must-stop for any caucus aficionado. Countless candidates have visited this diner in Iowa City, and the walls here are plastered with fun photos of past presidential visits. Depending on your party affiliation, you may enjoy getting your picture taken in the Clinton or Reagan booths.

Scenic Route Bakery – Des Moines (East Village location)
The unofficial high school cafeteria of Iowa politics, this coffee shop is where many top campaign staffers schedule their meetings at. It’s not uncommon to randomly run into a candidate here, or at least their staff. You also have a good chance of finding Starting Line here on any given morning.

State Historical Museum – Des Moines
Down the street from Scenic Route is the state museum that usually rolls out a special caucus exhibit during the caucus year. Check to see if it’s up yet before you go, but this is a nice spot to spend an hour at regardless for a little Iowa history.

Raygun, Des Moines
Also by Scenic Route and the museum in Des Moines’ East Village is everyone’s favorite Iowa t-shirt shop. Raygun prints out countless witty t-shirt designs on politics and the Midwest. This is the perfect place to pick up souvenirs for all your friends back home (and yourself).

The Airliner, Iowa City
A new addition to the caucus circuit, this is where a local college student famously brushed her way past Senator Kirsten Gillibrand in order to obtain some ranch dressing. Apparently, the ranch is very good here.

The Hoover Presidential Library, West Branch
A short drive from Iowa City is the state’s only presidential museum. It’s a rather fascinating one, acknowledging the shortcomings of Herbert Hoover’s administration, and detailing his post-presidential pursuits you likely haven’t heard about.

The Canteen Lunch In The Alley, Ottumwa
Get a loose-meat sandwich under a bridge. No further description necessary.

Ross’ Restaurant, Bettendorf
Another frequent stop for presidential candidates over the years.

Waveland Cafe, Des Moines
Check out the walls for signatures from presidential candidates.

American Gothic House, Eldon
Not a ton of presidential connections here, but it’s the perfect place for an Iowa photo.

The Iowa 80, Walcott
It’s the largest truck stop in the world.

There’s plenty of other spots to check out – check the comments section here for other Iowans’ suggestions.

Most caucus events are open to the public, so do what you like. It’s just important to keep in mind that presidential candidates come to Iowa to win over Iowa caucus-goers. The reporters following them are here to talk with Iowans. I’ve already been to a few events this year where the first three attendees who asked questions were all from outside of Iowa. I remember one John Kasich forum in January 2016 where literally every single questioner was visiting from another state or was a paid staffer from an issue group. Kasich got annoyed.

If you’re an out-of-state visitor who really wants to ask a question, I would simply suggest waiting until after several Iowans have gone first. Also, at most caucus events, there’s time to mingle with the candidate afterward and talk to them then. Many campaigns are now holding selfie lines for every attendee after their event, so there’s plenty of chances to get in a personal touch with a presidential candidate. 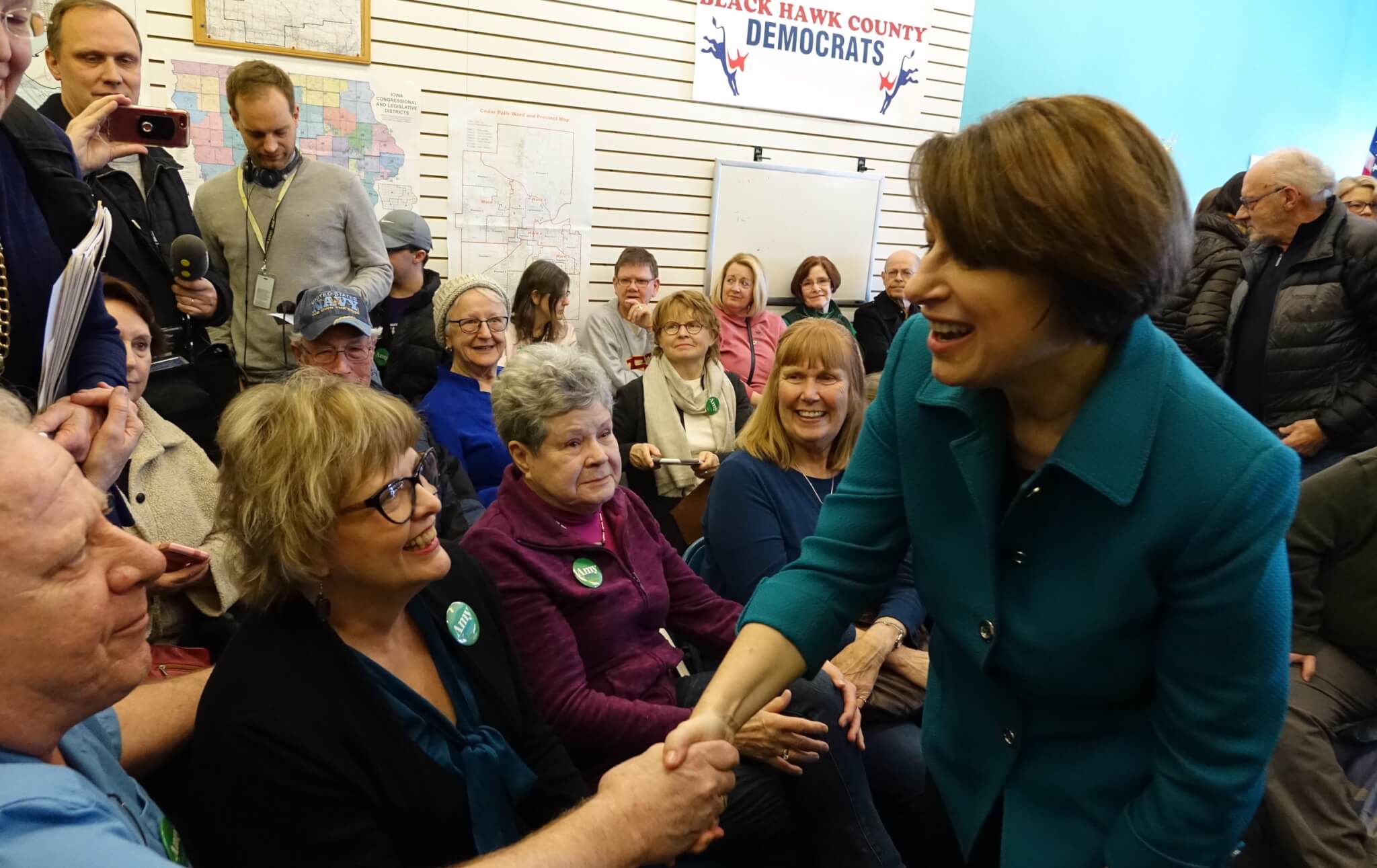 Volunteer for a Campaign

Some people have asked if it’s okay to drop by the many presidential campaign field offices that pop up across Iowa during the caucus. It’s fine, but again, remember that these are work places where staffers are focused on talking to Iowans. Most have nice, decorated storefront windows that make for a good photo, but aside from popping your head in to say hello and maybe snagging a button, it’s best to be respectful of everyone’s time.

That is, unless, you want to volunteer for a shift or two for a candidate. Then those field staffers will welcome you with open arms.

And actually, if you want the full caucus experience, if you already support a candidate, and if you have some volunteering history, knocking a door packet or two for a campaign can be a good option. Sometimes campaigns even set up supporter housing for out-of-state volunteers who plan to help out for a week or more (but that means you’re there to work, not sight-see). If you’re willing to volunteer for a campaign during a major event (which is a lot of fun), like the Steak Fry or the Fall Gala, you can sometimes get free tickets to the event as well. 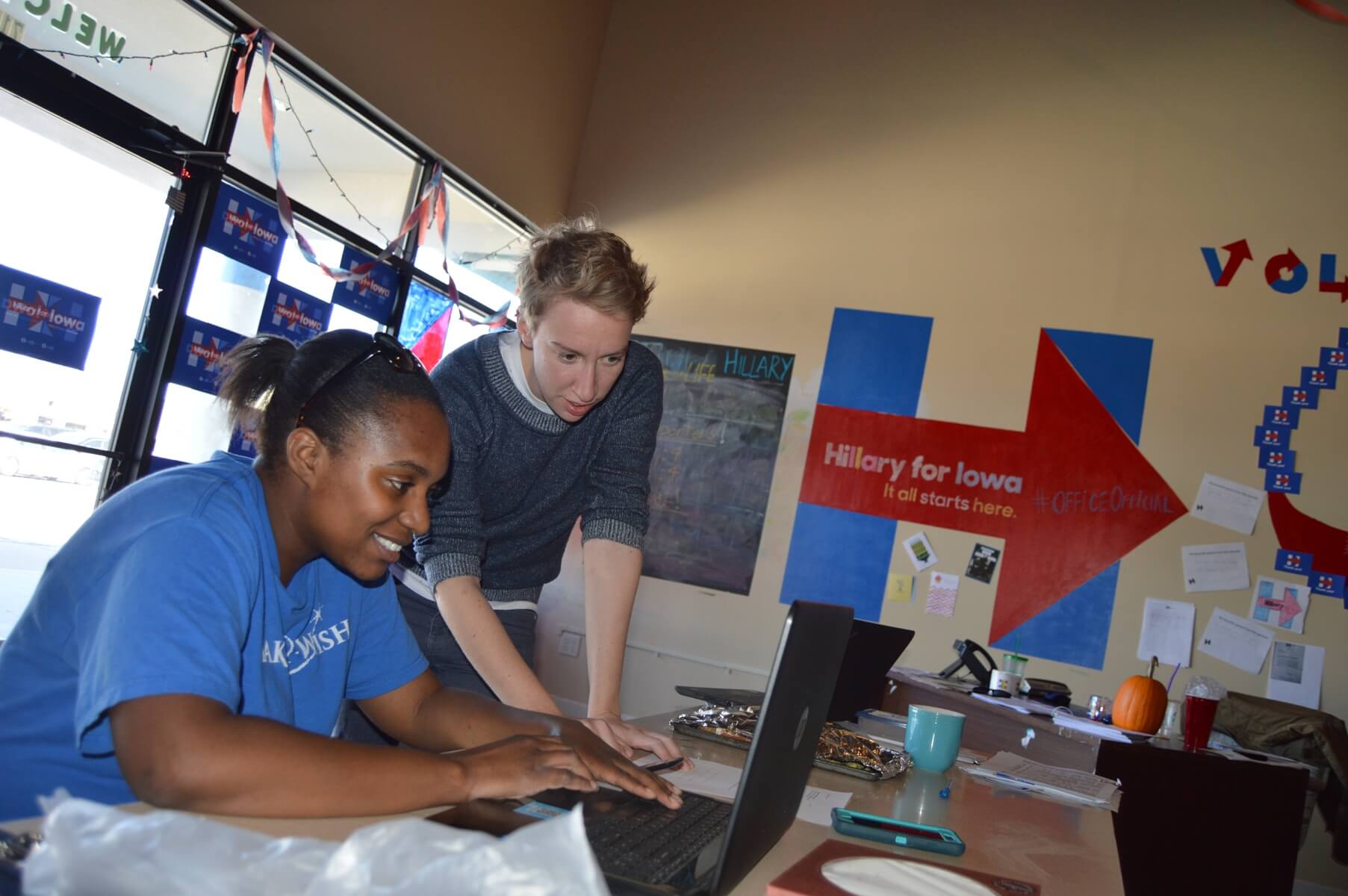 This is another situation where earlier trips are better. Campaign offices get lots of out-of-state help in the final weeks of the caucus, but extra volunteers early on in June or July are far more valuable. You also get more time to know the local staff then.

Drop Us A Line

Finally, if you plan on making a trip out to Iowa for some caucus sight-seeing, shoot us an email at IowaStartingLine@gmail.com. If I’m out on the campaign trail while you’re here, I always enjoy meeting Starting Line readers in person. And if these suggestions are helpful to your trip planning, we always accept tips and donations – every little bit helps us hire more reporters to cover more of the on-the-ground action in Iowa.

And seriously, if at all possible, come out to Iowa during the Iowa State Fair. You won’t regret it.

2 Comments on "Want To Do An Iowa Caucus Sight-Seeing Trip? Plan It Now."