Above photo via Joe Crimmings.

Presidential candidate Beto O’Rourke is well-known for his energetic, non-stop campaigning style, and that was certainly on display during his ambitious Polk County schedule on Saturday. He held six house parties, spread out across the Des Moines metro, an interesting strategy that brought out more than just the usual Democratic activist crowd. About 800 in all attended the six events.

Starting Line spent a full 12 hours with O’Rourke this Saturday as he hopped from stop to stop. Sometimes, seeing a candidate that often can get rather monotonous, as you hear much of the same lines at every event. But beyond the stump speech and policy proposals, there’s always the little moments, the personal touches, and the fun anecdotes that make every Iowa Caucus event just a little unique. O’Rourke’s campaign approach plays well to those interactions, which is what this piece is focused on in order to give you a sense of the “feel” of these caucus campaign stops.

O’Rourke’s day began at a downtown Des Moines hotel with a 7:40 breakfast in the lobby with his staff. Then he did a podcast interview with Starting Line (out Tuesday). After that, he hit the road.

As he did all day, O’Rourke drove himself to his first event, a house on Des Moines’ East Side at the end of a long cul-de-sac. Staffers set up cones in every driveway of each stop and along a stretch of sidewalk to reserve room for O’Rourke and a staffer car.

One woman from nearby Pleasant Hill joked that she wanted an O’Rourke house party for her birthday, which was yesterday. “You’re my birthday present!” she told O’Rourke.

O’Rourke gave a bottle of wine to house party host Suzette Jensen, adding, “It might be too early to open it, but depending on my performance today, maybe not.”

Jensen highlighted O’Rourke’s youth in her introduction, noting her son and the candidate were born in the same year. “He was in a rock band, I was in polka,” Jensen joked.

At this event, O’Rourke gave an explanation of how his children have extensive bi-lingual education in their public schools, taking math class in English one day, Spanish the next.

The last person called on during the Q&A gave a rather long speech on how O’Rourke should come to Indiana.

Event: Polk City
Attendance: 125
Hat?: Yes – an iCubs one (he took it off before speaking, though)
House party food: More donuts

As O’Rourke exited his car in Polk City, a man, in true Iowa fashion, rode up in a bright red tractor. Amused staffers took photos on it afterward.

At each event, the candidate has been briefed on little things about each host and important activists at it. O’Rourke asked Polk County Chair Sean Bagniewski’s son Teddy which flavor of sucker he liked best, pulling out a blue one of his pocket to give to him. This event was held at the house of Bagniewski’s mother. 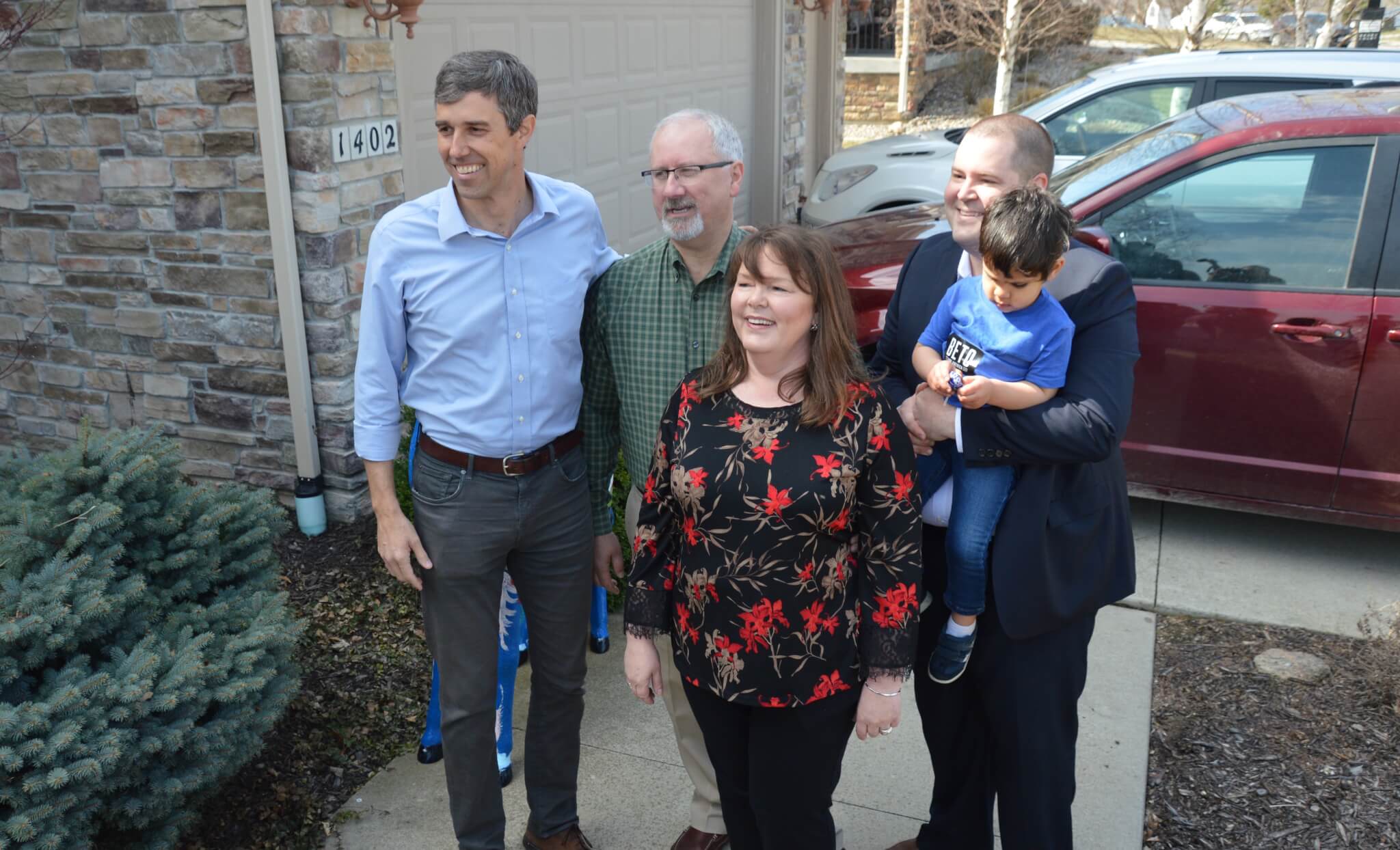 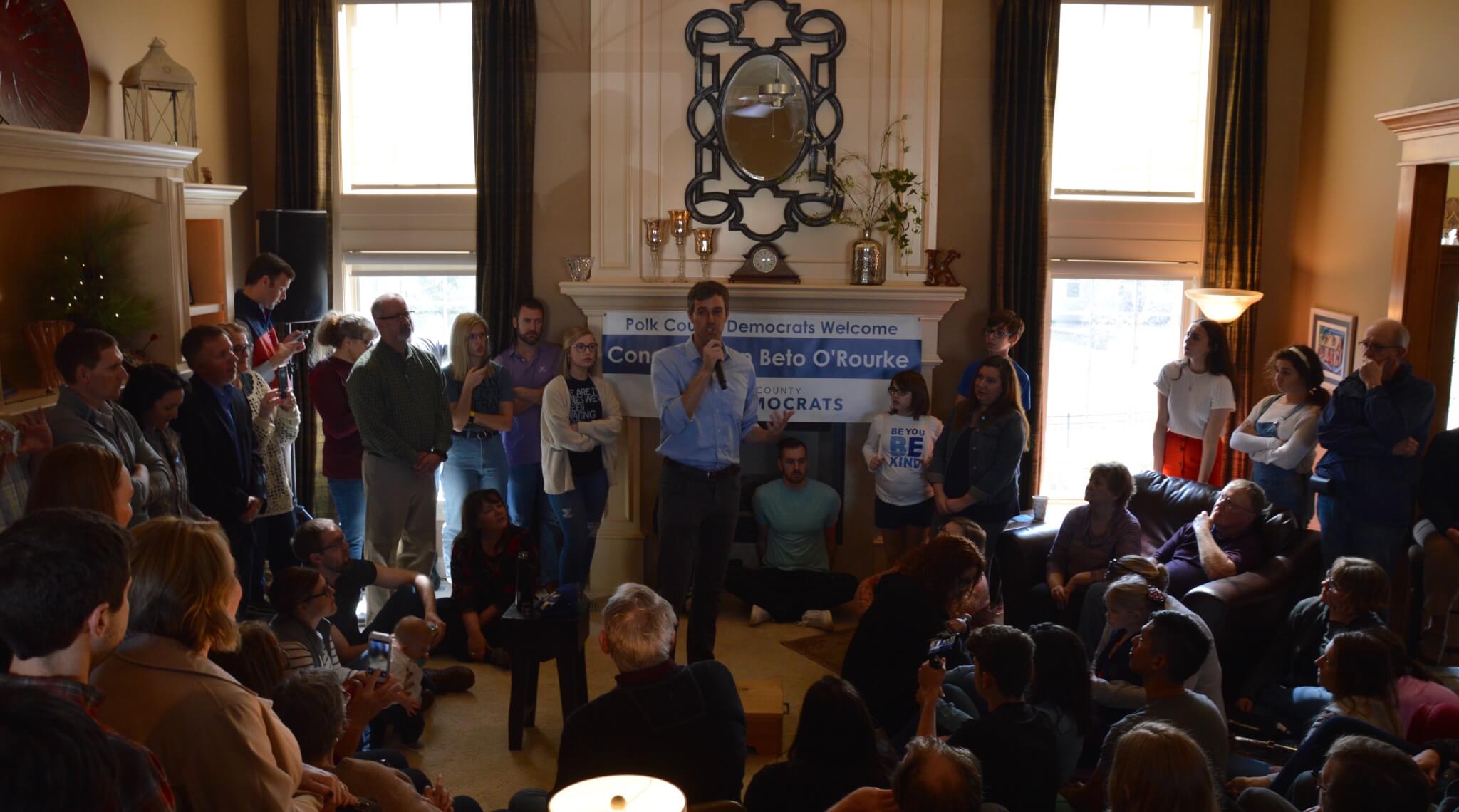 O’Rourke fielded a wide variety of questions here, including children’s hunger, student loan debt, and the criminal justice system. In his response on student loan debt, he linked the solution to strong labor unions and their apprenticeship training programs.

In Polk City, @BetoORourke answers in both Spanish & English a question that was presented in both of what’s the biggest real change he could do that’d last 500 years #IACaucus pic.twitter.com/WuX9iiyDHa

Right as O’Rourke finished up his Q&A, the monthly tornado siren test at noon Saturday went off, blaring through the air as attendees exited the house.

As O’Rourke headed into his West Des Moines event, he chatted with two parents holding their 7-month-old baby. The child was nibbling on a Beto campaign button in lieu of the pacifier his father was trying to give him. The house itself was an architectural marvel, and people gathered on a second-level balcony to watch the presidential hopeful.

O’Rourke noted he had spoken with State Treasurer Mike Fitzgerald, who was at this event with his wife, about the Iowa Caucus recently. He had done the same with Brad Anderson, Barack Obama’s former state director, who he saw at the next event. His early Iowa staff is well-connected, and O’Rourke seems to have been on the phone often with Iowa leaders to figure out tips and clues to winning the caucus. 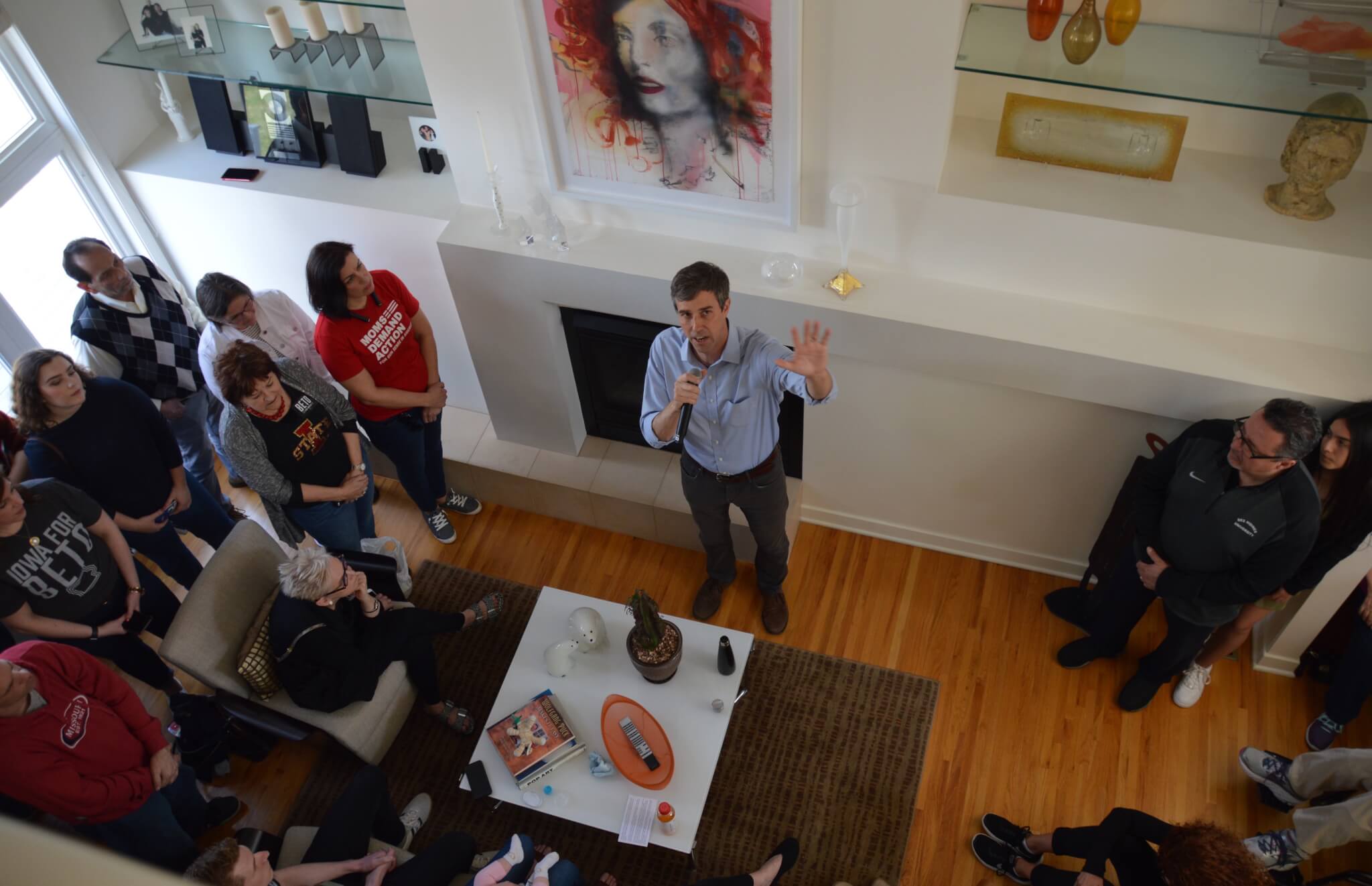 Sometimes when O’Rourke mentions various Texas or New Mexico cities, someone in the audience who’s lived there at one point cheers. One excited woman in West Des Moines cheered loudly when O’Rourke referenced Las Cruces. Asked by O’Rourke if she was from there, she replied, “No, just been there!”

At this event, O’Rourke talked about his plan to expand health care access in steps, gerrymandering and its impact on voter turnout, how refugees are among the most vetted people to come into the country, precision farming technologies, affordable housing, and China’s currency manipulation.

Event: Des Moines 42nd Street
Attendance: 200
Hat?: Yes – an iCubs one (he took it off before speaking, though)
House party food: drinks only

A picturesque outdoor event in perfect Iowa weather is a rarity during the caucus, but this one fit the bill. They held the event out on the large lawn that anyone who has driven down 42nd Street from the highway is familiar with. This was the only event on Saturday in which O’Rourke stood on something – a small box to elevate himself to the large crowd that surrounded him in a circle. 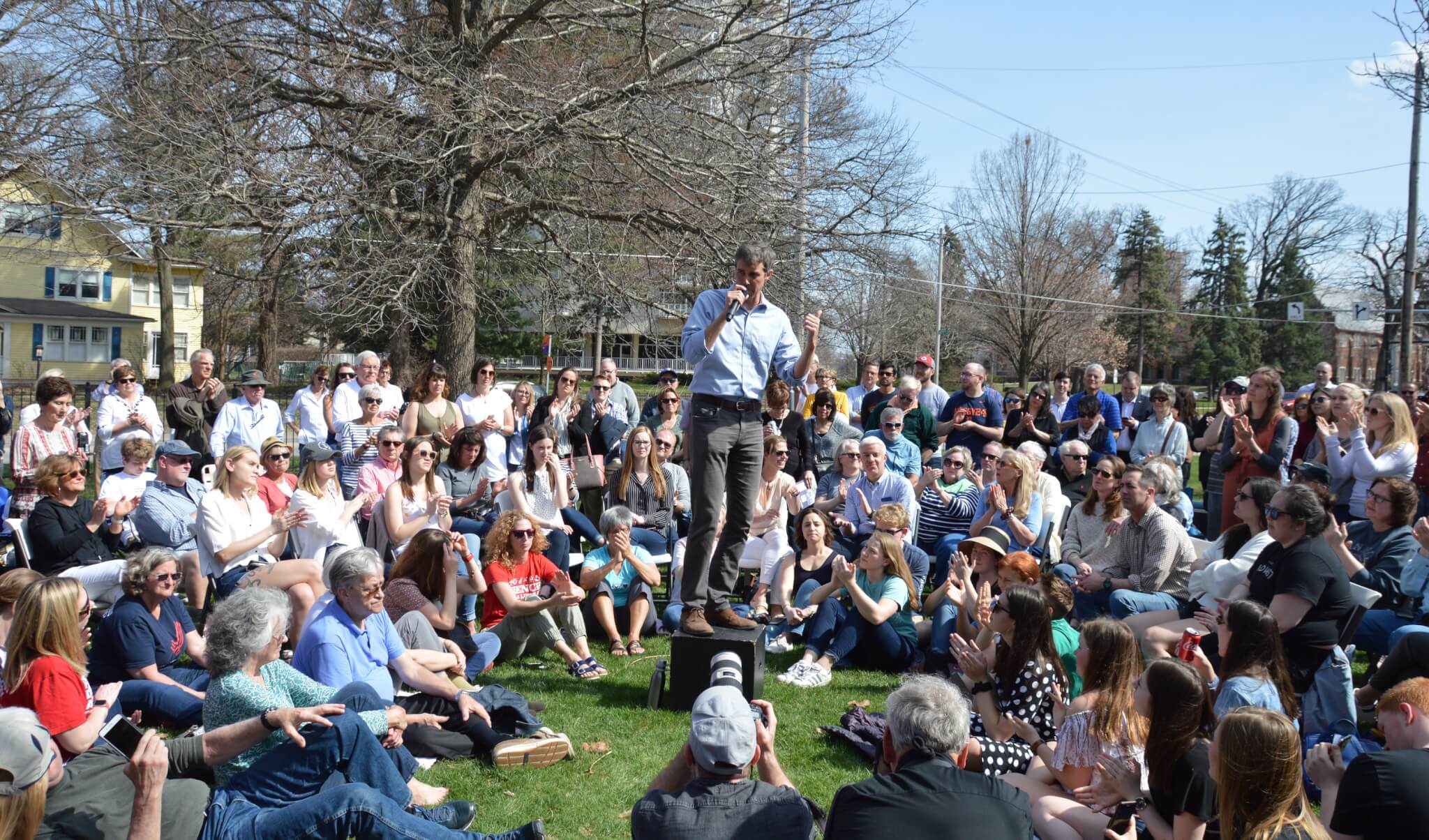 Upon his arrival, O’Rourke met the second woman of the day who had attended El Paso’s Hanks High School that now lives around Des Moines. She was surprised, and he suggested connecting the two.

J.D. Scholten was in the audience for this event, and O’Rourke called him “a man after his own heart” for the similar, go-everywhere style that Scholten campaigned against Steve King.

O’Rourke standing above the crowd and speaking through a loud audio system drew some attention on the nearby busy road. Many slowed down and rolled down their window to listen. “What? There’s Beto!” one young woman exclaimed as she drove past. A man slowed down and took out his phone to record before an annoyed bus driver behind him honked their horn. 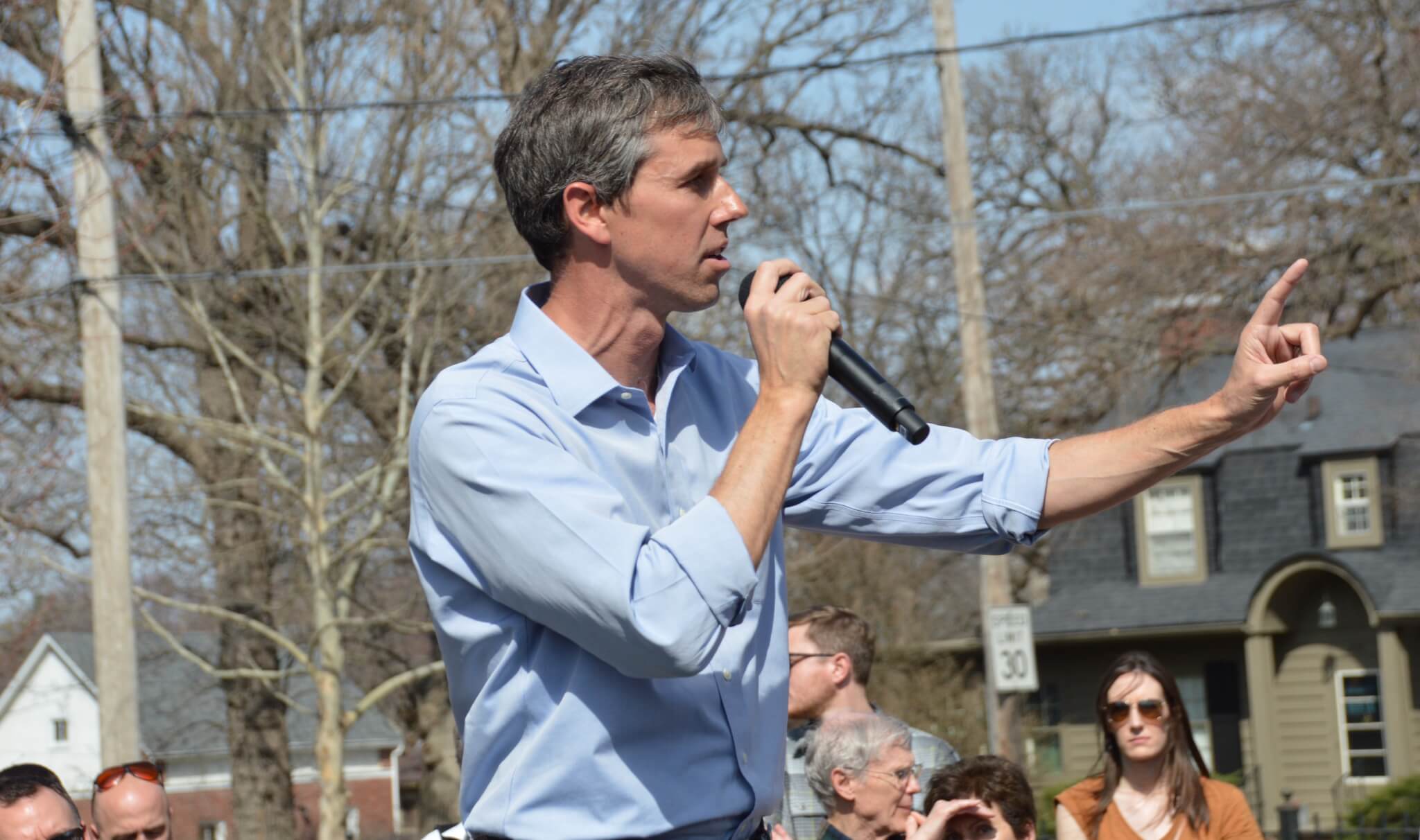 A man whose granddaughter was killed in the 2018 Santa Fe school shooting attended all six of O’Rourke’s events – a native of Nebraska, he was driving through the Midwest before returning to his current home in Alaska. He asked a question of O’Rourke at this one. O’Rourke noted that he carries a photo of the girl in his wallet, showing it to the man and two Moms Demand Action volunteers afterward. The man’s daughter, the mother of the murdered child, became friends with O’Rourke during his Texas Senate campaign, joining him at many events.

A man whose granddaughter was killed in the 2018 Santa Fe school shooting drove out for @BetoORourke’s Iowa events today. Got up the nerve to ask a question at the 4th event, O’Rourke mentioned he keeps a photo of the girl in his wallet, showed him & @MomsDemand activists after pic.twitter.com/K11g9yvbU3

More wine was delivered to the hosts of this party (California wine). As O’Rourke walked in, he chatted with State Representative Brian Meyer about their shared interest in The Replacements band.

Host Nathan Blake welcomed all those who were either “Beto supporters or are Beto-curious.” He joked that O’Rourke would be back to Iowa often, perhaps every month to his house, which seemed like a dangerous bluff to call of a candidate like O’Rourke.

At this point, your Starting Line reporter was getting tired and checked out early to get a quick meal.

This one felt like an old-school kind of campaign event, as old as the house it was held outside of. After too many people showed up, crowding the house’s living room, the gathering was moved outside to the front porch and lawn. As the sun started to set, O’Rourke’s voice echoed through the neighborhood as he stood on the front porch steps, and well over a dozen people stopped on the sidewalk on the other side of the street to listen. 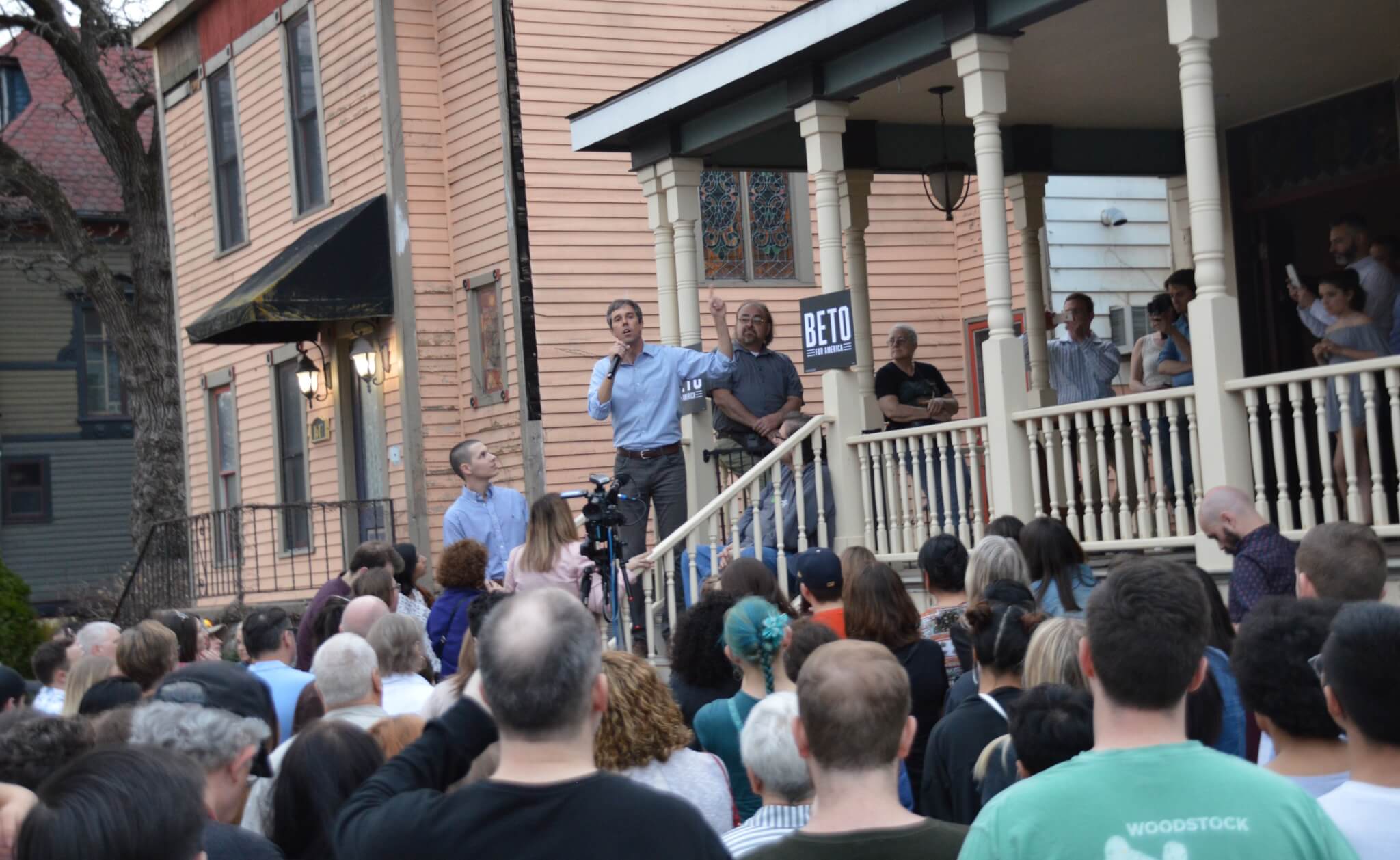 People came out of their apartment complex across the street to sit on their stoop and watch. Several people pulled their cars or bikes over and listened or waved. High up in third floor of the historic house, several kids watched the spectacle below. 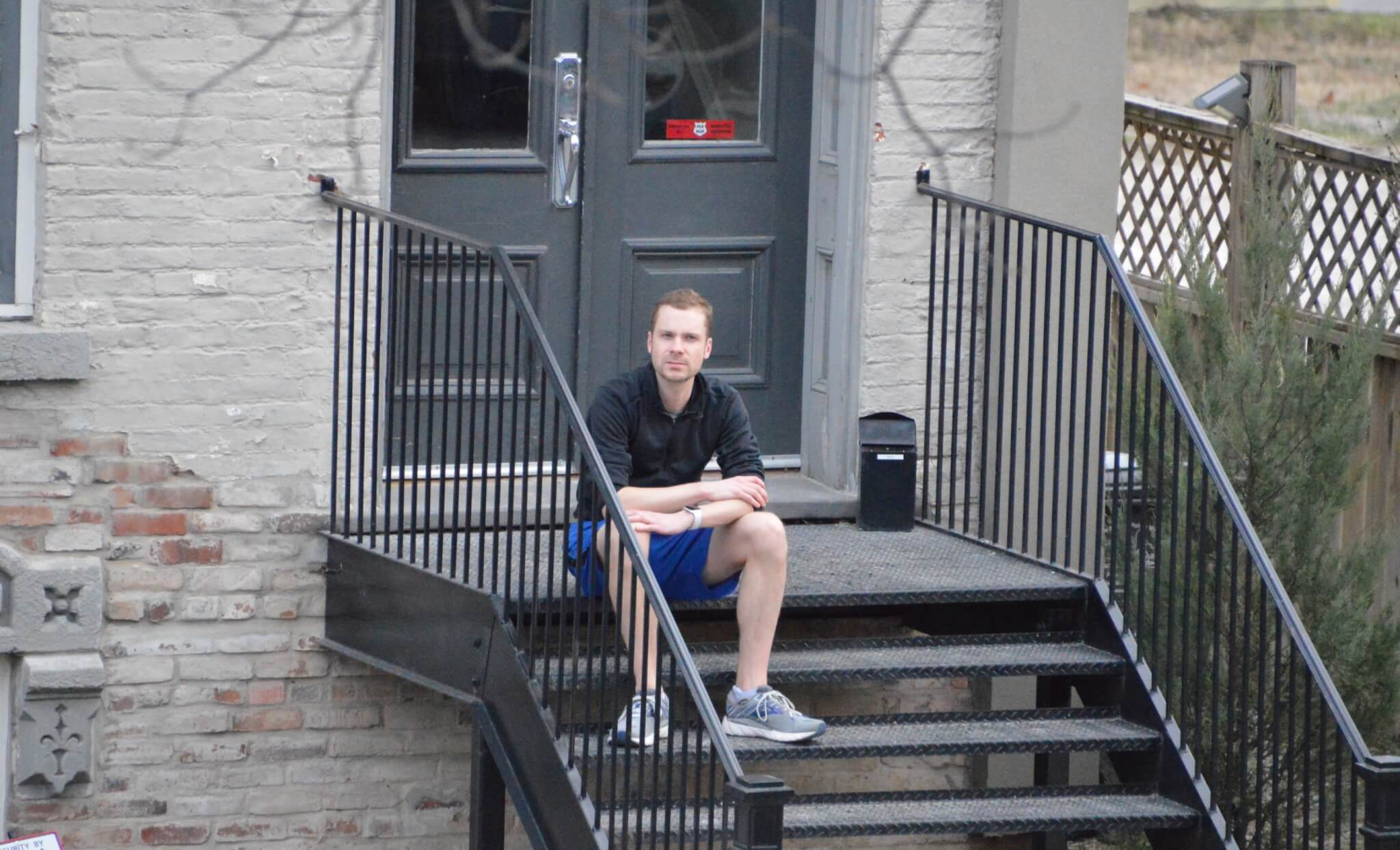 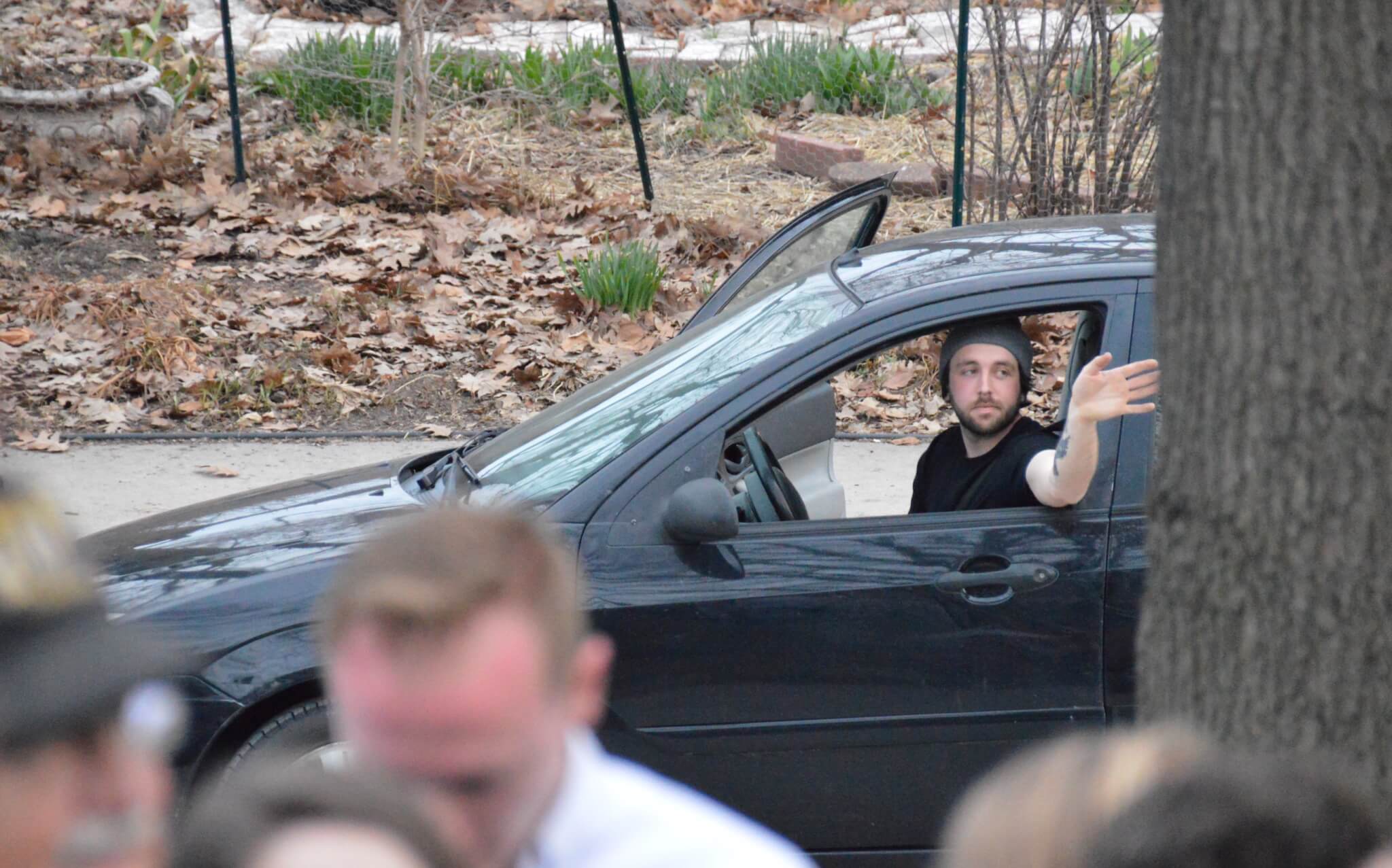 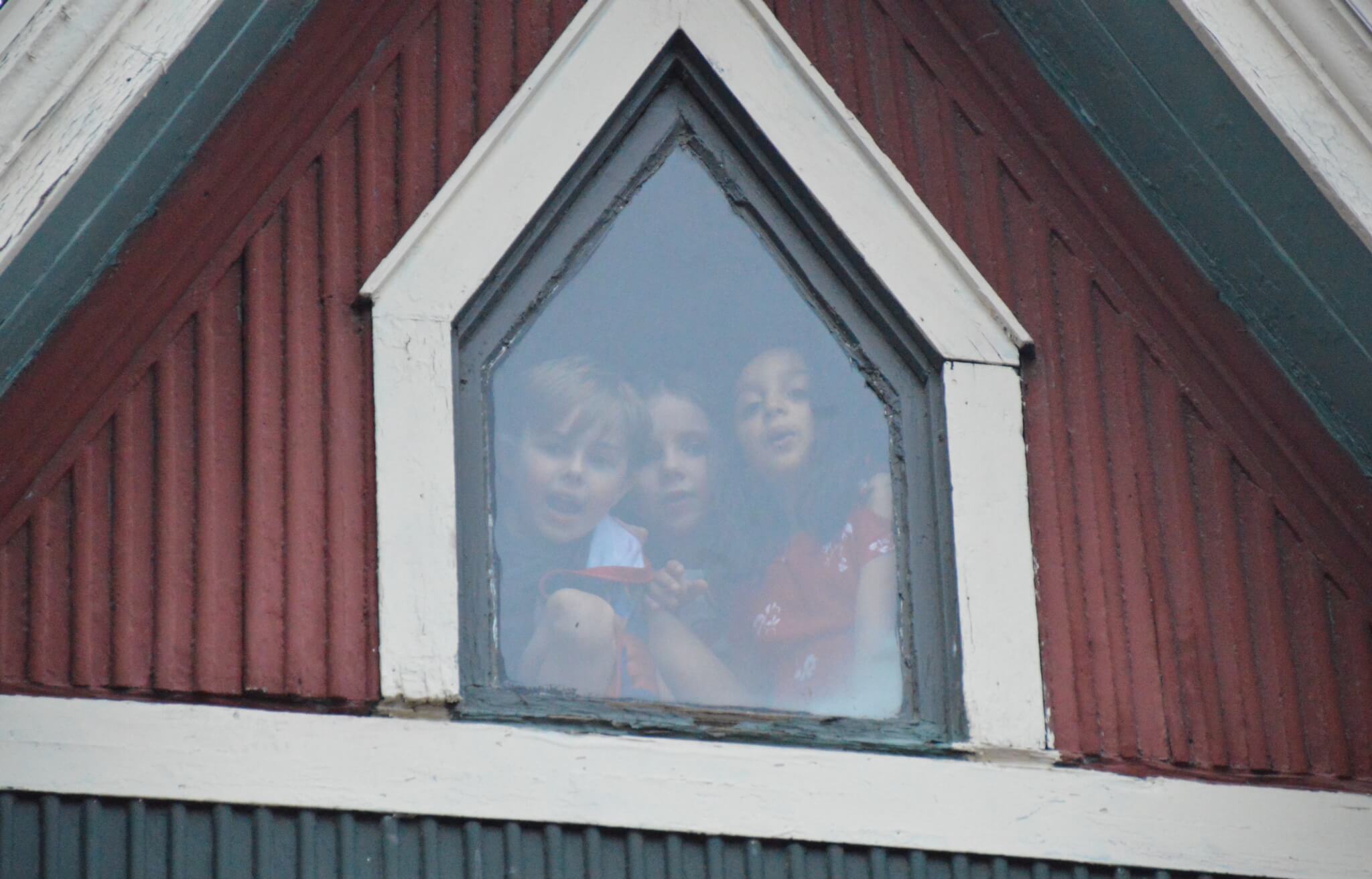 O’Rourke, mindful of the upcoming Texas Tech-Michigan State basketball game about to played, opened with a long story about Don Haskins, the legendary Texas basketball coach who helped end segregation in the NCAA. He pointed out the many red-shirted Moms Demand Action members who were in the crowd, and who had been out for all of his events that day.

Here, O’Rourke replied to a question about the separation of church and state with a warning to religious institutions who engage in politics, yet have a tax-exempt status. O’Rourke’s best line of the day came in response to a question about Trump’s comments on wind turbines. “I don’t think that wind turbines cause cancer, in fact, I think they cause jobs,” O’Rourke said.

Although he joked that he was told he must visit Carl’s Place, a longtime hangout for Iowa political staffers that was right across the street, O’Rourke, sadly, did not do so. The basketball game was likely his next priority, which Texas Tech won.